Carbide tips bite through ice, my bike wheels a spinning gauntlet built to rocket down the winter road. It’s a dank January night in Minneapolis, my route cutting a few miles across an urban grid. 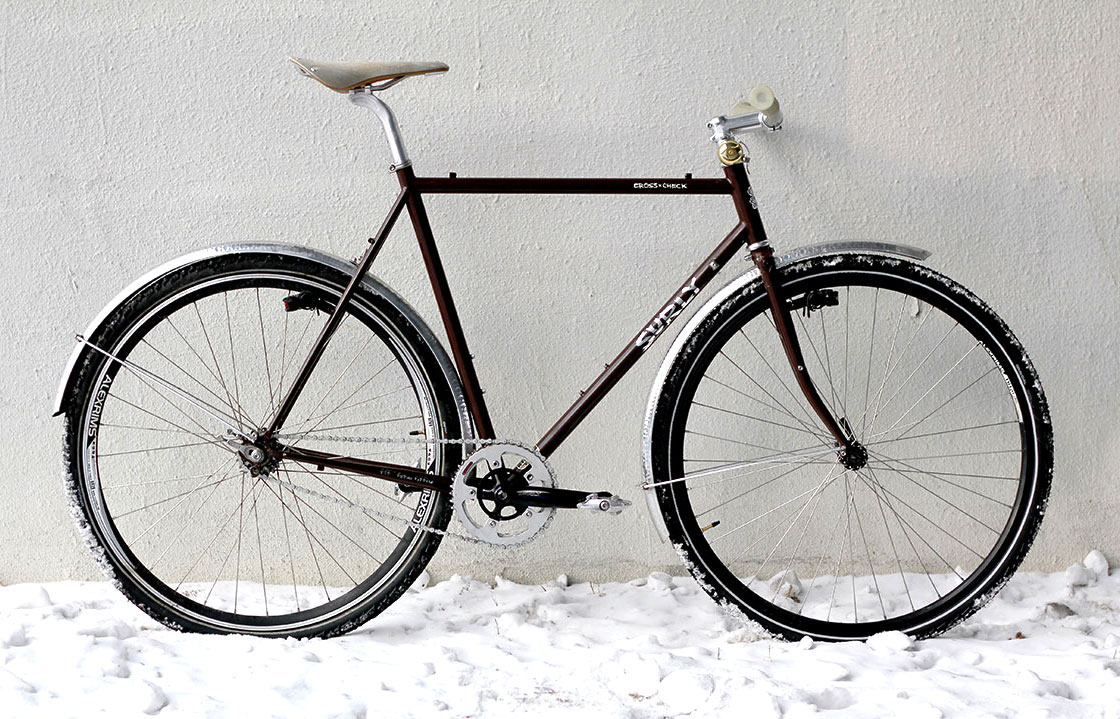 Cars smoke past. Potholes are half-hidden in patches of snow. Ice glints on pavement in my LEDs, the city more frozen obstacle course than daily commute.

But I am game, and so is the bike under my bundled frame. It’s been more than a decade since my tires first touched snow on a city street. Since then, my main mode of daily transport in the frozen city that is my home has been a bike.

From fat bikes to fender-equipped cyclocross steeds, I have tried every incarnation over the years. This season, as the snow settled on Minneapolis, I challenged area industry stalwart Quality Bicycle Products (QBP) to build for me an ultimate winter ride. (QBP is a major bike-parts distributor and it also owns brands including Surly Bikes, Salsa Cycles, 45NRTH, All-City, and Problem Solvers.)

The result is a fixed-gear speedster pared down to just the essentials for commuting and urban errands in the cold. It’s based off a Surly Bikes frame and manifested to a complete build a la carte via QBP’s extensive parts catalog, which includes dozens of components designed just for winter rides.

The chain is rust-resistant, the tires studded to grip on ice and snow. Fenders kill the road spray. Integrated lights keep me visible, as do glow-in-dark grips under my hands. 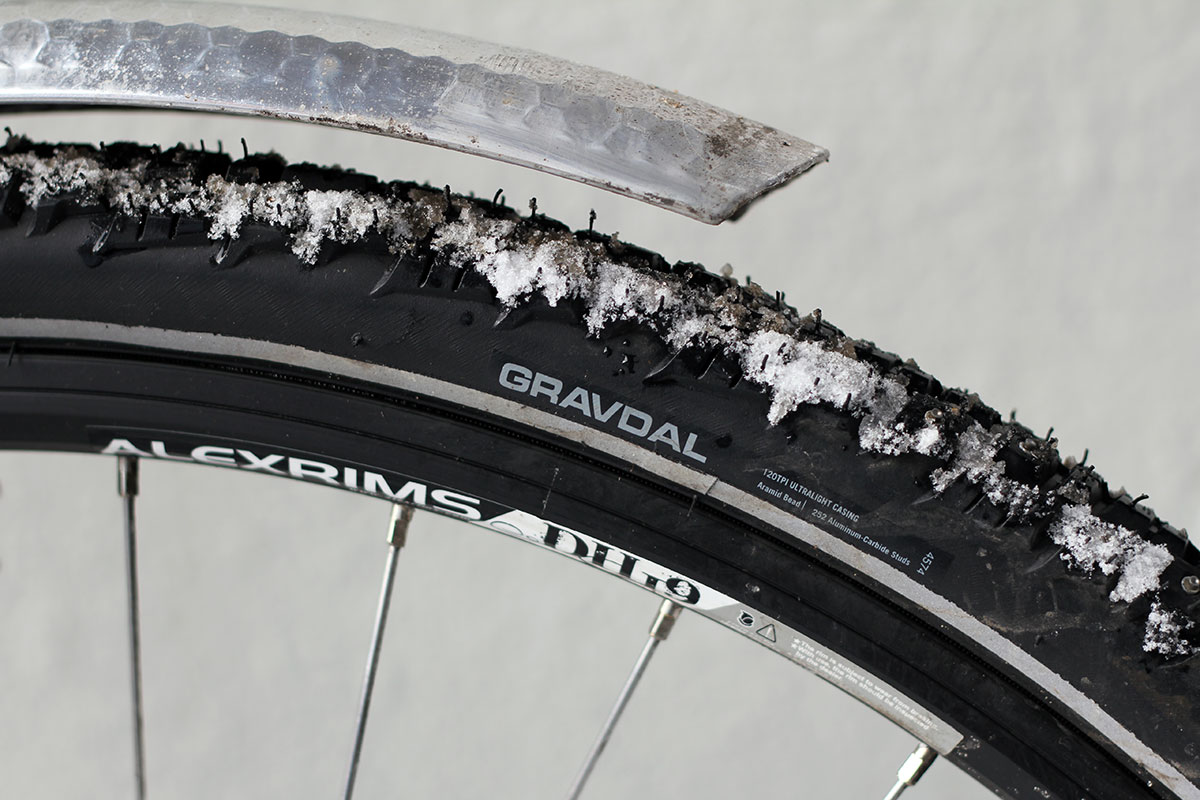 In all, this is one esoteric build, including an aesthetic that borrows from the urban fixed-gear scene though with gloss touches like a Brooks saddle, chromed decals, and a brass bell.

Function was considered first, however, over form, and the bike pedals like it has 4-wheel-drive thanks to massive 45NRTH tires and an overall utilitarian get’er done nature for which Surly Bikes is known.

Here’s a breakdown of the QBP Ultimate Winter Bike. So far, this arctic steed has served well for more than 500 miles ridden on the Minneapolis winter grid. I have yet to crash despite two months of commuting through the snow, ice, sleet, slush, and wind that comes daily in the North.

FRAME: The Surly Cross-Check SS frame has a red/brown “Cuba Libre” color to make it stand out. We added chromed decals for pop, too. Beyond that bling this is a workhorse bike frame, an immensely popular 4130 CroMoly steel triangle with TIG-welded, semi-horizontal dropouts that allow for singlespeed, fixed, or geared.

It takes tires up to 700c x 42mm and comes with cantilever brake studs and the bosses and braze-ons to accommodate cables, bottles, fenders, and racks.

Caveat: Steel frames are not always the best choice for winter riding, as they are more susceptible to degradation than aluminum or other material types. We added a chemical treatment inside the frame to fight corrosion and rust. 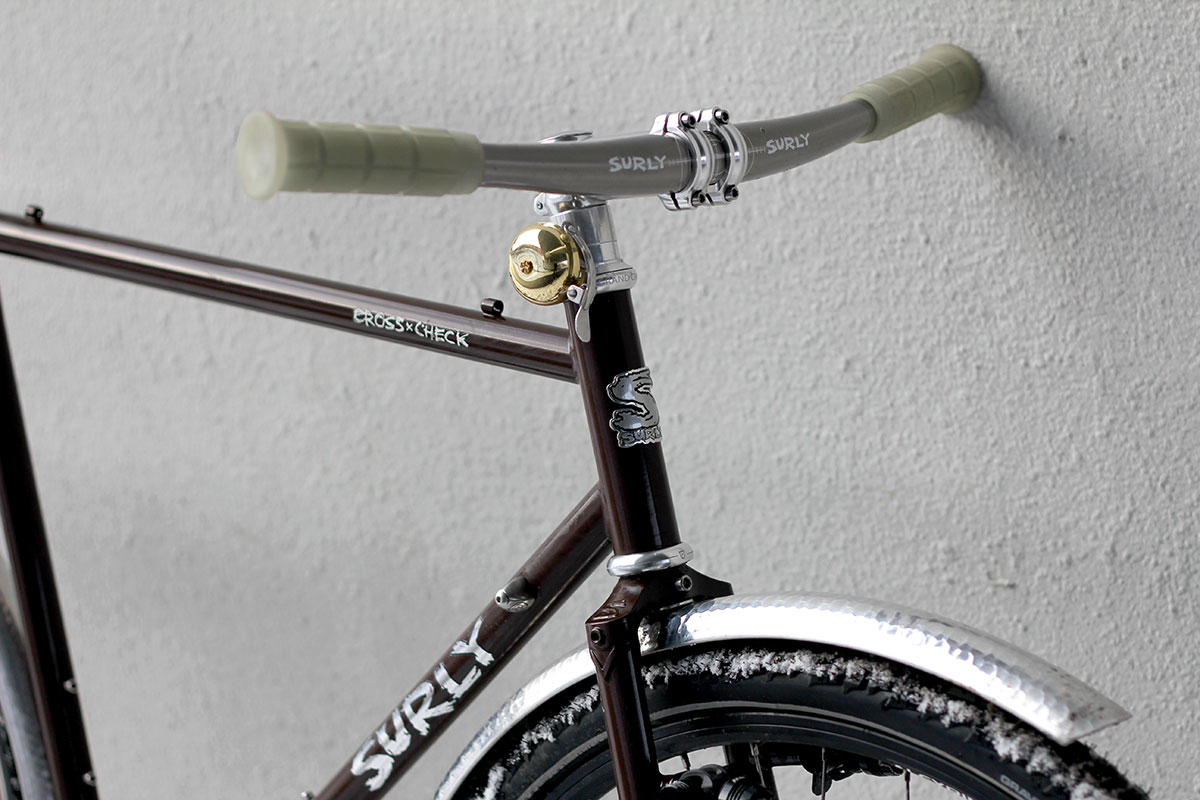 SINGLE-SPEED: Simplicity is key to maintaining a winter bike. The fewer parts the better, and things like shifters, cables, derailleurs, and cogs common on a geared bike can get clogged with snow and grime. I prefer the pared-down nature of a single-speed bike, and in Minneapolis the hills are small so extra gears are often not needed.

For this bike, QBP’s mechanics added a slight upgrade option, converting the bike to a “dingle-speed” model using the Surly Dingle Cog. The double-cog gives a 17- and 19-tooth option, letting you switch “speeds” by moving the chain.

Up front, two chainrings hug behind the cranks, offering more gearing for varying conditions day to day. Caveat: To “switch gears” a rider must dismount, loosen the rear wheel, move the chain, and secure all parts back in place. It’s a process best left for the garage where you have tools and a stand, not a quick switch to make on the road.

FIXED-GEAR: A fixed-gear drivetrain means no freewheel, no coasting, and a real-time rotational connection with your bike. (On a fixed, pedals are locked in motion with the chain and wheels as they spin.) Though there’s a learning curve, I prefer fixed-gear in winter for its improved control and a “road feel” via sensation underfoot as you pedal. On slick surfaces or in snow the tactile feedback keeps me hyper-aware of what the tires are doing.

BRAKES: With a fixed-gear, traditional brakes are not needed. Instead, slowing down is as easy as applying some light resistance to the cranks, which I find more natural and less cumbersome than brake levers, especially in winter. To stop, you apply more pressure to abruptly decelerate, or you can lock up the pedals, causing the bike to skid.

All this takes practice, but once mastered riding fixed is a fun, safe, and efficient way to control a bike. As a bonus, with no traditional brakes there are fewer parts to both purchase initially and then maintain as winter weather clogs and corrodes.

TIRES: With massive grip, the Gravdal tires from 45NRTH have 252 carbide studs positioned on a 700c x 38mm tire. The brand touts these shredders “yield a level of confidence and safety never before seen in a commuter tire,” and I agree. They grip onto snow and ice, and multiple times when my wheels have slipped and slid out this year I have heard and felt the studs grab purchase, righting my bike or keeping me straight.

The rubber has siped lugs and oval-shape studs for more purchase. The tire is wide enough to somewhat float in snow on the road or at least power through the deeper stuff.

As noted, the Gravdals have saved more than one fall for me this winter. That said, they are overkill most of the time; they are large and loud when rolling on pavement, with the multitude of carbide tips creating a nails-on-chalkboard noise if I skid where the road is dry. Buy these if you ride in icy climates, but go lighter on the grip if your winter routes are mainly pavement in between random moats of snow. 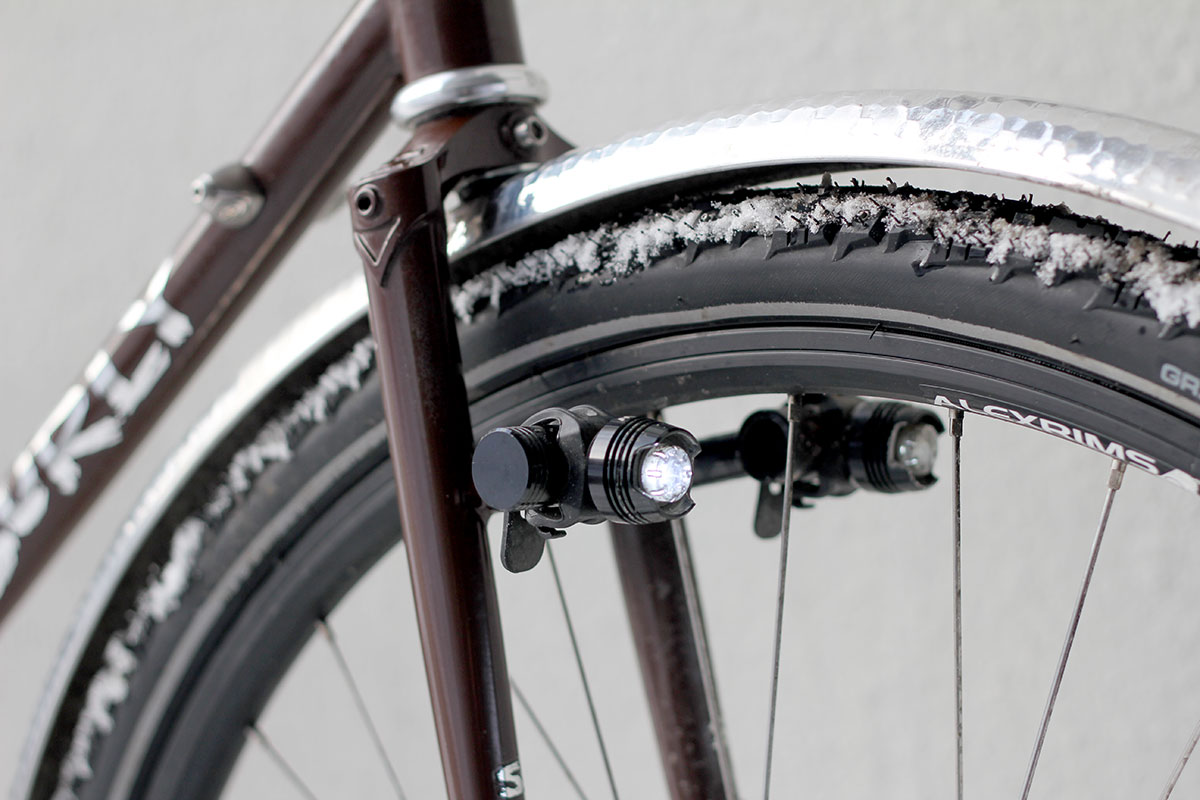 LIGHTS: Problem Solvers’ Brake Stud Light Mounts attach to the frame’s cantilever brake studs. The short posts then provide a place to attach lights, and for this build we picked the TLT-200 Trimaxion Head & Taillights from MSW.

These small, simple LEDs worked brilliantly to keep me visible, including front white lights and blinking red lights on back. Select a mode by pressing the lens to shuffle between on, off, and flashing. At about 7 lumens (red) and 17 lumens (white), they are not exceedingly bright, and on many rides I supplement the MSWs with brighter LEDs on my helmet and backpack. They take coin batteries and last for literal weeks of riding before needing a change.

FENDERS: Some immediate class — and great utility — is added with the Velo Orange Hammered Alloy Fenders. The dimpled, polished silver look meshed with the frame decals and miscellaneous silver parts, pulling the bike together aesthetically. One warning: Carbide-equipped tires and alloy fenders, when they meet, do not a good sound make! Be sure to mount with care. 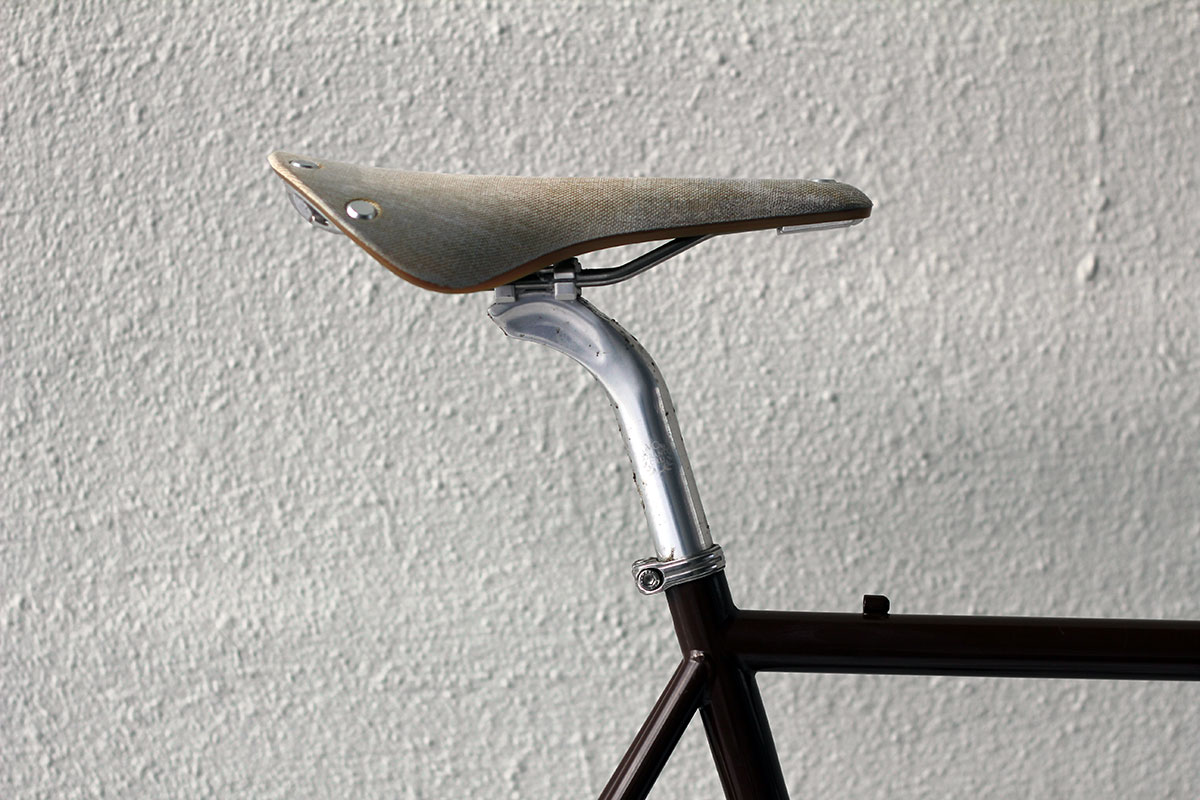 SADDLE: Brooks’ C17 Cambium saddle gives the bike a handsome seat. While most Brooks saddles are leather, the Cambium line uses a vulcanized natural rubber with a cotton material top perhaps better suited for moisture, snow, and ice. A die-cast aluminum structure and steel rails create a durable platform for the Cambium, and the Brooks “hammock” construction reduces road vibrations to add comfort as you ride.

PEDALS: The iSSi Trail Triple pedals offer a secure clipless setup (SPD-compatible) plus a platform so you can cheat with boots or normal shoes on occasion. (However, I don’t recommend non-clipless shoes for fixed-gear.) I liked these pedals once clipped in, but many times I had trouble with either snow on my boot or snow clogged in the pedal; it took a few strokes to securely clip in. I have not had this same issue in past winters using Crank Brothers Eggbeater pedals and other more open designs.

FINAL PIECES: A litany of components and bits completed the build, from headset spacers, seatpost, stem, and more. There’s a Surly Mr. Whirly Singlespeed Crankset. The wheels were built in-house at QBP via the Quality Wheels division, which used an Alex 700c rim mounted on Surly hubs. Handlebars came from Surly, and they are adorned with Oury Mountain Grips, a glow-in-the-dark white/green rubber that were fun and added a bit of additional visibility to the bike.

In the end, despite a few tweaks I will make, I have been highly impressed with this bike build. It’s rolled me through two months of tough Minnesota winter conditions, tracking straight and hardly wavering when the ice appears or the snow gets deep.

Because of the added niceities — including the pricey saddle, integrated lights, fancy fenders, blingy brass bell, and quality or high-end components all around — the bike is not cheap. Add it up and the retail price for this build hovers at about $2,100. 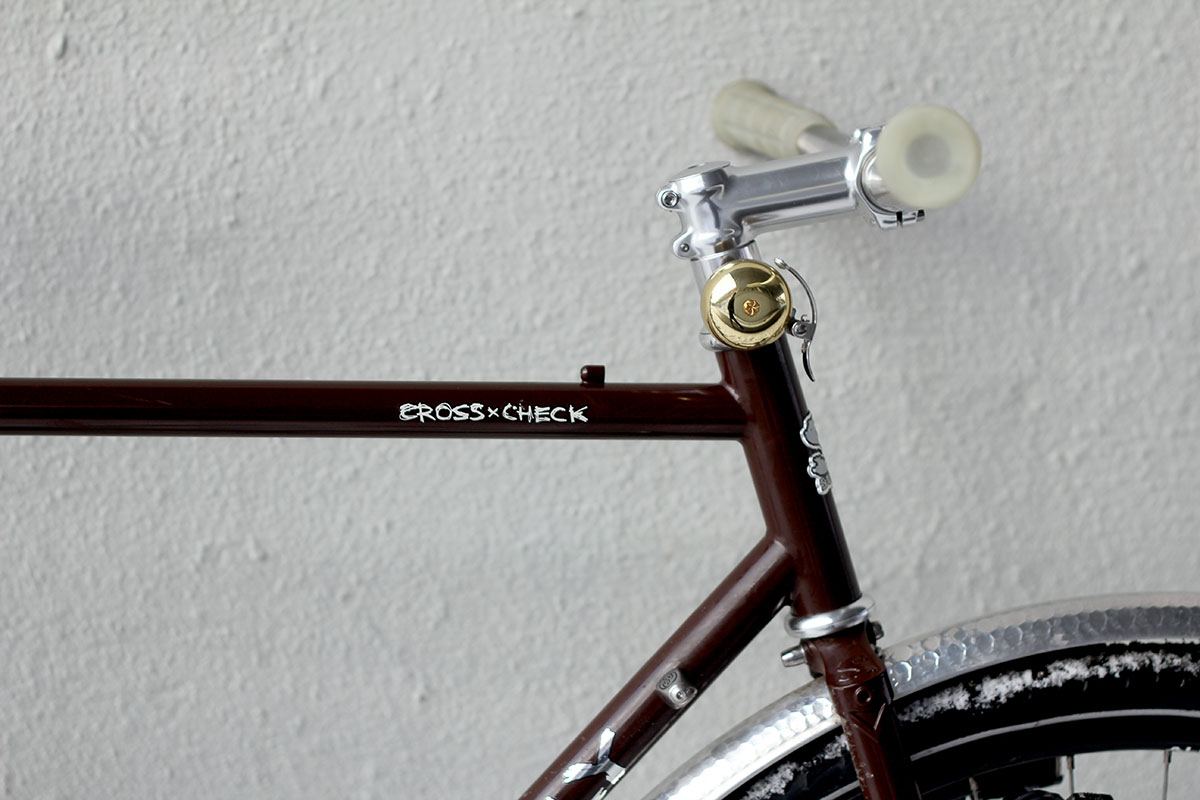 But for that you get a winter-ready steed that will last for years and move you through the cold months without hesitation.

You can ride in the winter for much less money (see my ‘Customized Urban Winter Bike,’ as one example) but to roll in comfort, style, and safety on the winter road I am happy to have this gorgeous and capable build as transport from November to April as the ice forms and the snow piles deep.

Up Next: Winter Cycling Congress: Tackles Infrastructure, ‘Wimpification’ On Bikes