Home » Biking » Future Of Human Powered Transport Is A Trike 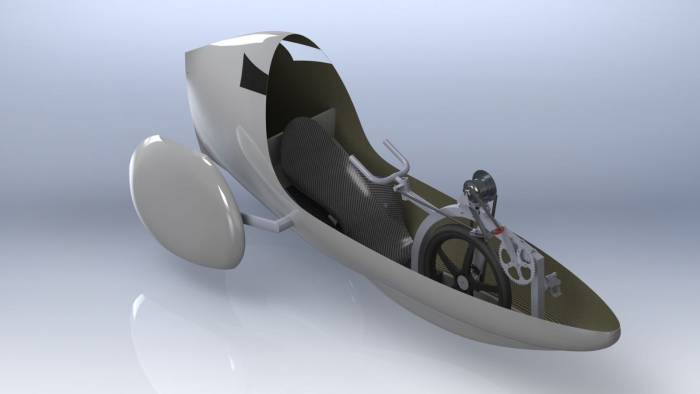 A team of designers and engineers in the Netherlands is attempting to write the next chapter in clean transportation.

With little publicity here in the States, Wim Schermer’s VeloTilt project is making stunning headway in the efficiency and convenience of commuter cycling. Looking like something out of The Jetsons, the groundbreaking velomobile, conceived by Schermer in 2012, is on the brink of completion. 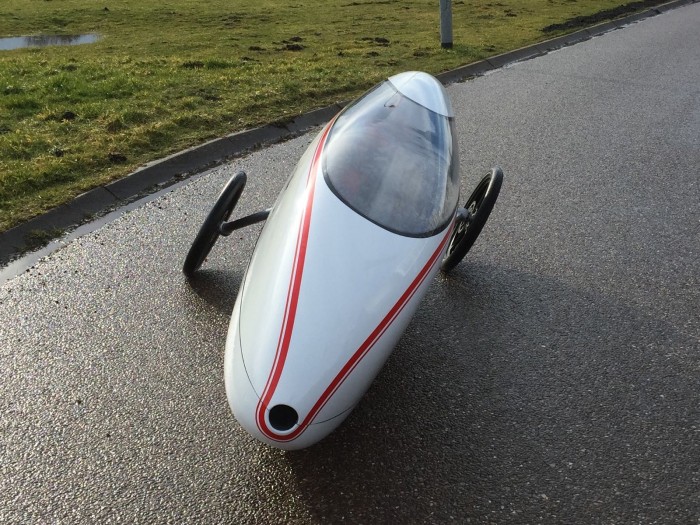 Until now, the project has been kept intentionally off the radar as design issues have been worked out. Schermer agreed to give Gear Junkie a peek behind the curtain before the final decisions are made about offering VeloTilt to the public. 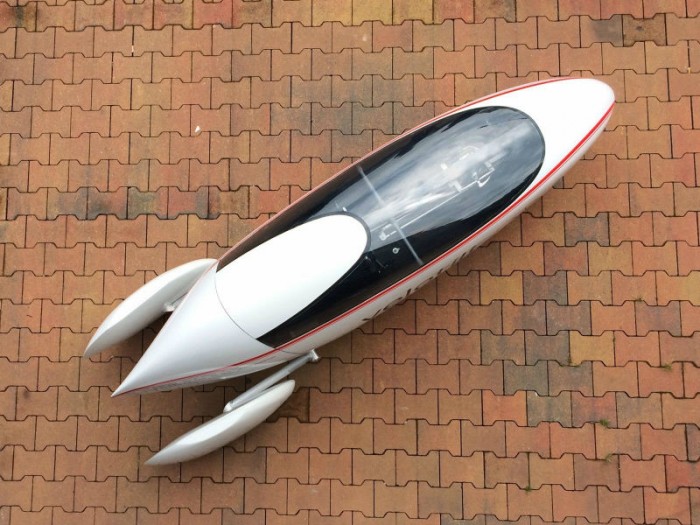 The eight-foot-long, three-foot-wide trike is a breakthrough in the world of velomobiles thanks to its ability to lean into turns. Up to now, pedal-powered commuter vehicles have suffered from stability issues. Two-wheel vehicles are inherently unstable at a standstill, making complete stops on the roadways hazardous. Entering or exiting the vehicle is also problematic.

Three-wheel vehicles, by contrast, are prone to roll-overs when cornering at speed. And though bicycles seem like an adequate alternative to many, Schermer has attempted to create a vehicle that everyone can use as their primary mode of transport — a vehicle that is efficient, easy to use, comfortable for the rider under any conditions, and, above all, safe. 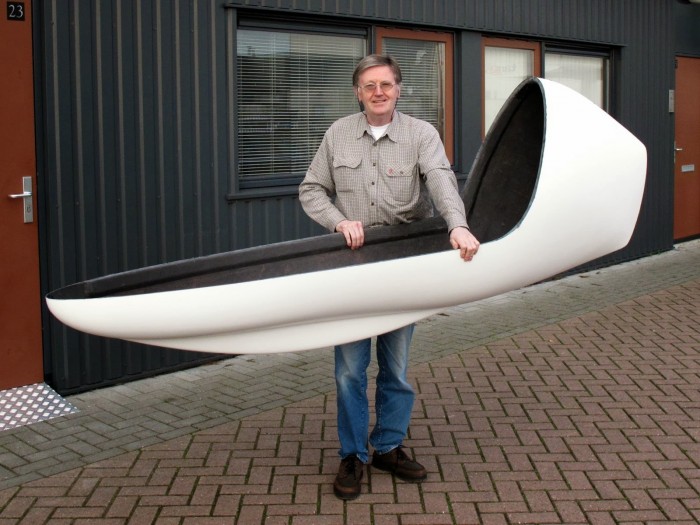 Two things separate the VeloTilt from any other velomobile: Its dual outboard rear wheels free up “trunk space” (three cubic feet, about the size of a mini-fridge), and its patented tilting mechanism. The former provides enough space for two spare wheels with cargo room left over. The latter gives the vehicle its name and has been no small feat of engineering.

While building a chassis that can roll through a turn wasn’t an overwhelming task in itself, it was devising a means of stabilizing that action when the vehicle was at rest that proved confounding. The VeloTilt team spent more than two years tackling that “locking” problem, wrestling over how to keep the body upright when it needed to be while still allowing it to lean smoothly around turns.

Ultimately, after a fourth failed attempt, the team stumbled upon the answer from a tool found all over their workshop – clamps. The spring-loaded mechanism that allows the jaws of a bar clamp to adjust to various widths was exactly the missing element of the VeloTilt’s magic. A simple flick of a thumb switch allows the driver to hold the body upright or allow tilting.

The VeloTilt body is made of a dual-layer carbon shell with a hexagonal-cell foam core. It is resistant to deformation and very light. The sidewalls are reinforced to prevent caving from side impacts, while the nose has a crumple zone to absorb energy from a head-on collision.

The current prototype can fit drivers from five-and-a-half to six-and-a-half feet tall, has an adjustable steering column, and an interior width just shy of two feet. With all the bells and whistles, the Tilt will weigh in at 55 lbs. — not all that heavy when you consider it includes a fully-enclosed shell, windshield, three-wheel chassis, 14-speed Rohloff hub, cranks, pedals, and wheels. 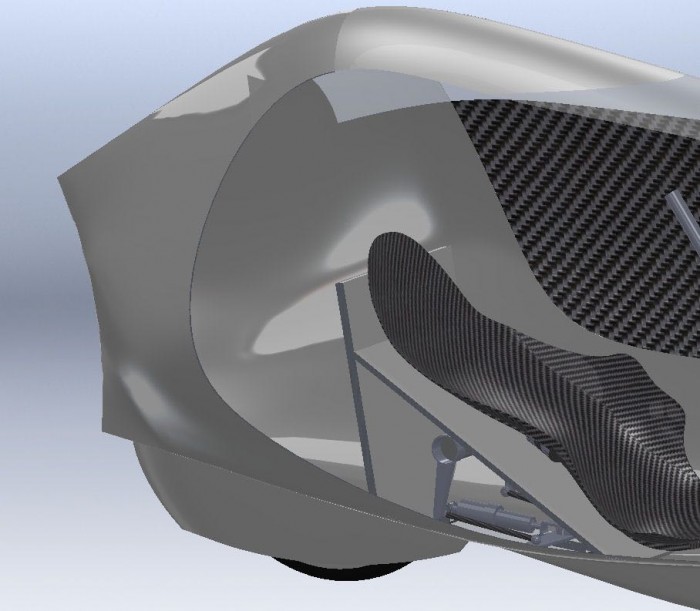 Under the hood, the VeloTilt looks like an industrial recumbent cycle. Currently, the assembly is mostly aluminum, but many elements will likely end up carbon. Bebop pedals crank the 14-speed hub, powering the 20-inch composite wheels.

Disc brakes and MTB shifters are stock. What’s more impressive, the entire body is held on with four bolts, as is the drivetrain assembly to the chassis. Everything, Schermer promises, can be assessed from your kitchen chair and all parts can be found in a well-stocked bike shop.

For safety and convenience, the Tilt can be shifted into reverse and will likely feature a rear-facing camera that will wirelessly connect to the driver’s phone for virtual 360-degree visibility.

A carbon intake hose connected to the nose will cool the driver and defog the visor.

Drivers will have the option to purchase a one-horsepower electric wheel and small battery that would help power the bike to 60 mph for 160 miles. No word yet on mirrors or lights.

The Tilt won’t break the 83-plus mph velomobile speed record of the VeloX4 (which happens to be designed by VeloTilt team member David Wielemaker), but its painstaking aerodynamics allow sustained speeds flirting with 40 mph under 150 watts of human power (roughly equivalent to an average rider’s fast cruising cadence). (Check out the related video below about the human powered speed record.)

Though the decision to mass-produce the VeloTilt won’t come until early this summer and no determination of price has yet been made, it’s likely a commuter VeloTilt will not be less than $10,000.

Schermer’s Quest velomobile, the current flag-bearer in his shop, carries a $7,000 price tag, is heavier, uses older technology, and is less maneuverable than the Tilt. Whatever the price, though, customers will be paying for a revolutionary riding experience.

Schermer, who lost his left eye in a sailing accident and subsequently came to appreciate the safety and control of velomobiles over cars or bicycles, has devoted himself to bring a safe, comfortable, feasible alternative to the world’s motorways. With the VeloTilt, he has taken a big step.

You can follow VeloTilt’s progress on Schermer’s blog (translated to English). We look forward to watching the development of this technology and hope to take a spin in the driver’s seat some day soon.

Up Next: Unsanctioned: ‘Lord Of Griffith’ Street Race