Datavores rejoice! Virtual reams of cycling metrics are delivered to your handlebars with the Wahoo ELEMNT bike computer. In this review, we focus on the ELEMNT’s utility for bikepacking and route navigation.

The sky turned inky gray after a very, very long series of days in the saddle. I’ve already pushed, pedaled, and muscled my bike more than 370 miles. I’ve got another 50 to go before I reach the finish line. After hours of tracking cloverleaf loops on abandoned mining roads, my Wahoo tells me to turn downhill towards a giant green gate — and around the sign that prominently shouts, “Road Closed.”

This summer, I tackled my first bikepack race, 420 miles on remote Idaho gravel and wispy trails. The race director provided a turn-by-turn cue sheet to navigate the course, starting and ending at my local neighborhood pub.

I’m an analog type of guy, so I printed the notes and tucked them in my bibs. I then downloaded the GPX file for the route, strapped the Wahoo ELEMNT to my bars, and held on tight as I followed the mammoth loop through central Idaho.

Garmin nearly owns the bike computer market. But it isn’t the only kid in town. Atlanta-based Wahoo made its splash in cycling through the popular KICKR bike trainer. But it quickly brought its tech outside when it added bike computers and a host of sensors to track heart rate, cadence, power, and more.

The ELEMNT represents Wahoo’s top-tier bike computer in the series of three (the BOLT and the recently released MINI round out the suite). 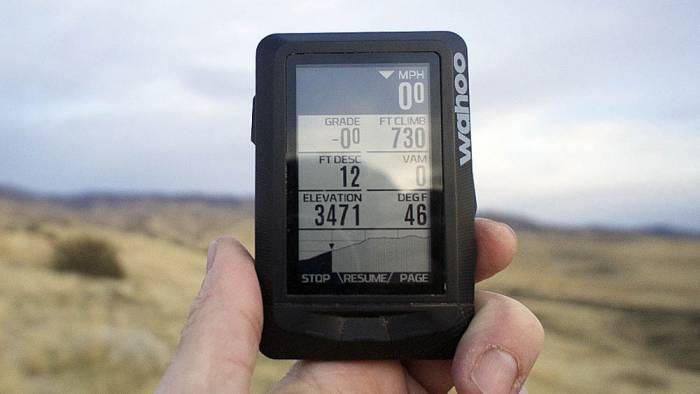 When developing a bike computer, Wahoo understood the challenges of competing with smart devices. From superior retinal displays to touchscreens and colorful interfaces, brands invest billions of dollars to make phones and other mobile devices snappy and efficient.

So instead of trying to rebuild what’s already great, Wahoo leveraged the strengths of the mobile device (like touch interface navigation), made integration a snap, and focused on making a bike computer that is robust, simple to use, and provides heaps of data.

With connectivity to power meters and a suite of sensors, the ELEMNT can handle loads of said data, which is useful for bikepacking and route navigation.

Out of the Box 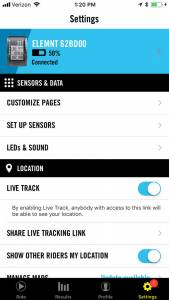 Open the box, and you’ll find the device packaged with a handful of zip ties, a micro-USB cable, and three sets of mounts to swap among a stable of bikes: time trial aerobars, an out-front mount, and a simple stem mount.

What you won’t find is an instruction manual. That’s because the ELEMNT is so easy to set up it doesn’t need one. While that’s a bold statement by the brand, it proved true.

Instead, users download the Wahoo ELEMNT app, turn the device on, and scan the QR code with a smartphone. Presto, the ELEMNT is activated.

Once activated, managing routes, creating a profile, customizing displays, pairing with sensors, linking accounts — nearly everything — is done through the ELEMNT app. And the app regularly pushes updates, so enable Wi-Fi to take advantage of the latest firmware. This also helps keep your route library up to date.

With the heavy setup lift completed on the phone, settings automatically sync to the ELEMNT through Bluetooth. The ELEMNT has six push buttons that proved easy to navigate and toggle while wearing gloves.

A single button on the left powers up the ELEMNT. And two (up and down) buttons on the right function as zoom control, toggling through deep data screens and a map scale.

Lastly, three buttons on the bottom serve as primary cockpit controls. These allow the user to access route history, start and stop rides, and toggle between map, gradient, and metrics fields while in the saddle.

My favorite screen quickly became the elevation profile, which not only shows the elevation climbed, but also the elevation ahead. Big picture, it sheds perspective on how climbs compare from one to the next.

To plan a route, you’ll either need to create a new route or import an existing route through a linked mapping account. Wahoo syncs with the heavy hitters, including Strava, Komoot, and Ride with GPS (recommended).

Once you authorize a mapping account (and sync the ELEMNT to Wi-Fi), account routes seamlessly sync via Bluetooth through your phone. I found that activating long routes (like my 400-mile bikepack course) or selecting courses on the fly proved a little laggy.

The grayscale OSM maps looked a little spartan at first. I was hoping to see some topography mapping, maybe in color. But for readability, the monotone palette communicates directions quickly, and over time I began to appreciate the simplicity.

A series of dark chevron arrowheads point you toward the route direction, and miles consumed turn to a solid dark line. Top and side LEDs draw the rider’s attention to upcoming turns and confirm when you are on (or off) route.

In the world of the ELEMNT, a route is a direct line between points a and b. The ELEMNT acknowledges that there are peripheral roads, but the screen will not scale beyond the “route.” So by its calculations, you are either on route or off. There is no in between.

Should you veer far off course, the ELEMNT won’t help you navigate another way back on course. For that, you’ll have to get resourceful to work around.

Case in point: On a recon ride in Nicaragua last spring, my riding partners and I found that not all roads on our maps turned out as predicted. Occasionally, we had to choose an alternate route that pulled us off the Wahoo route. To pedal us through the crux, we used an offline map app, MapOut, as a “traditional” map. This helped us navigate back onto the unchanged Wahoo route.

Alternatively, if you’re predisposed to curiosity and exploring where the road may bring you, eschew the Wahoo’s “route” and bring a map. Then, press the start button to record the route. When you’re back home, you can download and analyze to your heart’s content.

Wahoo claims the ELEMNT holds a charge for 17 hours. In my experience (while crunching through map data), this was a bit ambitious. I found that 15 hours was more accurate. Regardless, you’ll need a backup power supply if you pedal multiple days on the road.

But what the Wahoo lacks in battery life it makes up for in flexibility. The ELEMNT can charge while navigating. Pedaling into the night, I connected the micro-USB to the bottom of the ELEMNT and to a portable power bank stowed in my feed bag. With a spare power source, the ELEMNT stayed charged for the entire 70 hours.

Wahoo ELEMNT: What We Liked

Setup. Getting started with the ELEMNT is incredibly simple.

Usability. The ELEMNT leverages a cellphone to lift all that we love about our mobile devices. It puts the raw bolts of navigation, durability, and metrics on a simple, easy-to-read device. 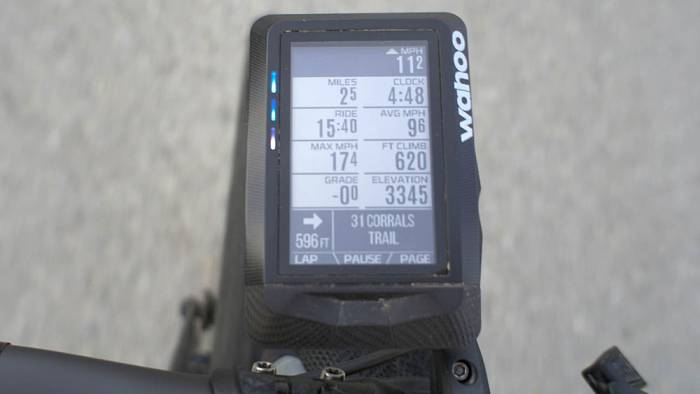 ELEMNT App. Wahoo’s companion app is easy to use and regularly updated.

Durability. The ELEMNT is waterproof, dustproof, and shockproof.

Charges on the fly. This is a must for longer rides.

Data fields. The ELEMNT provides heaps of data for the training nerd. Fields can be reduced for reading simple visual cues.

Strong signal. With four satellites guiding the way, I never dropped a signal, even inside narrow canyons and under deep forest canopy.

OSM maps. I didn’t like these at first. I thought they were too simple and I wanted more visual data. But after riding with it for a while, I became a convert. It’s the right amount of navigation data you need.

No map view. While OSM maps are included, they are tough to explore. Wide-angle views quickly lose detail. Unless you’re on a prescribed route, it’s tough to identify where you are on the “map.”

No off-course navigation. The ELEMNT shows the trails, but unless you have those trails saved as a route, it won’t tell you which road or trail to take.

Touchscreen display. But in this day and age, I sort of expect it.

Lack of color. Same expectations, but once you learn to read the black-and-white maps, the visual load is easy to interpret.

Parting Thoughts on the Wahoo ELEMNT

Wahoo’s ELEMNT is a simple, easy-to-use device that enhances the cycling experience. Gone are the days of stopping at every split in the road to check (and double-check) if I’m on the right route.

The ELEMNT app and integration with the smartphone makes route creation and navigation a snap. But it’s not without error. Once off course, the inability to navigate back on course is the tool’s Achilles heel. But updates are regular, and perhaps this too will eventually find its way onto the ELEMNT.

And as for those cue sheets? Those stayed tucked away in my bibs. And the phone stayed on airplane mode for most of my race. I only pulled it out for the occasional picture and to text to my wife.

The Wahoo, though, was a dependable partner that helped me stay on course late into the night, all the way to the finish line. And that’s precisely where the ELEMNT shines.