You might not put a lot of thought into your canoe paddle. But plenty of others did back in the day — and the results are paddles far more comfortable and complex than you realize.

The myth of the solo American inventor, working feverishly with chewing gum, baling wire, and twine under a bare light bulb in a garage is a strong and persistent one.

But, in the history of technology, it’s a well-known idea that culture and necessity can combine to produce independent, yet simultaneous, innovations. In fact, across nearly every area of enterprise, multiple innovators developing near-identical inventions might be the rule rather than the exception. Thus the need for patent attorneys and intellectual property law.

Even in something so innocuous as the bent-shaft canoe paddle, competing claims exist. One claim involves the paddle’s design evolving for racing; others insist that the shape was created to lessen stress on the paddler. Either could be right. And, as in most canoe-related designs, the native tribes might have been there first, as some canoeists in the South Pacific employ bent-shaft paddles. 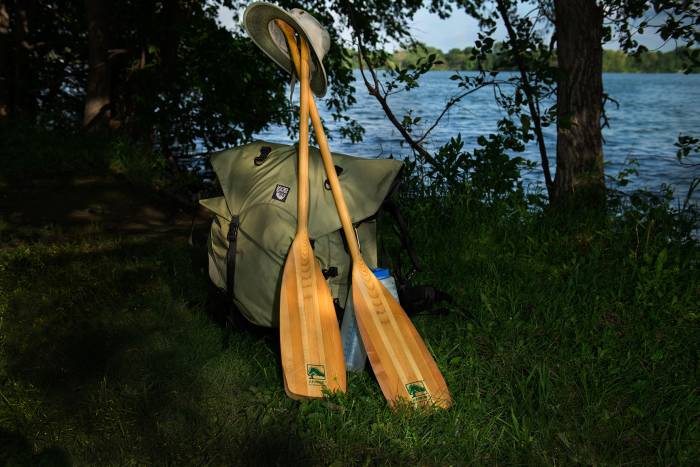 Eugene Jensen, a well-known canoe racer and boat designer from Minneapolis, is often credited with inventing the bent-shaft paddle in the 1970s. He built one for competitions, and from there it migrated into the mainstream.

Jensen grew up on the Mississippi River and was a marathon racer, winning the 450-mile Bemidji-to-Minneapolis endurance test four times. In 1971, while paddling next to other canoeists, he began to watch the shape and motion of their endeavors.

“They had to dig these enormous holes, and their paddles would really cavitate,” he recalled in a 1993 interview. “They didn’t seem to go as fast as they should. I decided, well, maybe the best thing to do is bend that shaft back a little so that the blade comes in at the beginning of the stroke rather than further back.”

His first design had a 7-degree bend, and the idea evolved into shafts bent at 12-degree and 14-degree angles. Jensen didn’t patent the idea, which led to conflicting claims about its origin. If nothing else, he certainly should get credit for its popularity.

John Winters, a longtime canoe designer and member of the Society of Naval Architects and Engineers, spent much time testing various bent shafts to prove the effectiveness of the design. Today’s racers, with their carbon-fiber tools, usually employ a shaft with an 8-degree bend, and some prefer 12. 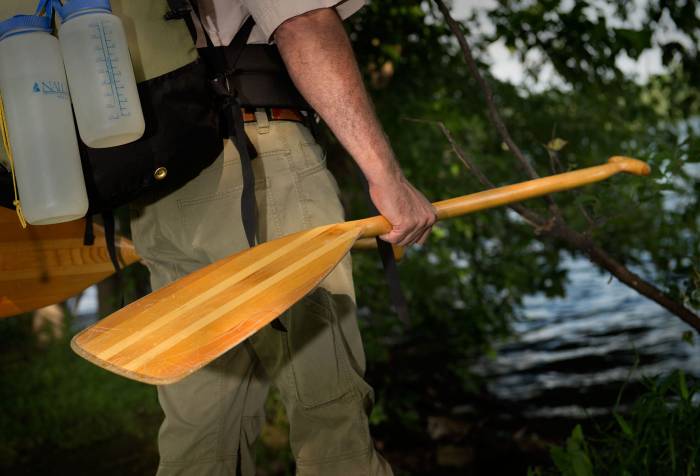 Bent Shaft: More Is Not Better

Bends vary from miniscule to 15 degrees, although the most common are 10, 12, and 14 degrees. (Experts have determined 17 degrees is the maximum efficient bend. And anything less than 7 or 8 doesn’t provide the same benefit.)

And, because there can never be too much of a good thing, manufacturers have introduced paddles with double bends. Although, one sales rep gave me a look that said, “This double-bend is for sales and marketing, not for performance.”

Perhaps not coincidentally, furniture makers arrived at the proper angle eons ago in the construction of chairs. The Smithsonian Institution, arbiter of all things craft, recommends 10 to 15 degrees for maximum seat-back angle comfort. That’s why a bent-shaft paddle also comes in handy at a remote campsite — someplace where there’s nowhere to recline in comfort. So the paddle offers a ready backrest dead center of the 10- to 15-degree range when leaning against a stout pine tree.

Meanwhile, outside of racing and leisure, a veteran paddle-maker named Brad Gillespie from Webster, N.Y., devised a bent paddle for his wife, who suffered from an injured wrist. According to author Dennis Stuhaug, Gillespie’s design helped his wife reduce the strain on her sore joint and lessened the pain.

It seems 1967 must have been one of those intense multi-discovery years that keep patent lawyers busy because Otto Klabunde picked up No. 3,330,245 for a bent oar.

An oar is not a paddle, so T. L. Gooding of Wisconsin stepped into the breach in 1981 with a patent (No. 4,303,402) that actually has a bent shaft right before the blade. Oddly, this has sides and a bottom like a triangular cake pan. The angle was described in the government documents as “7 degrees to about 15 degrees,” which about covers it. 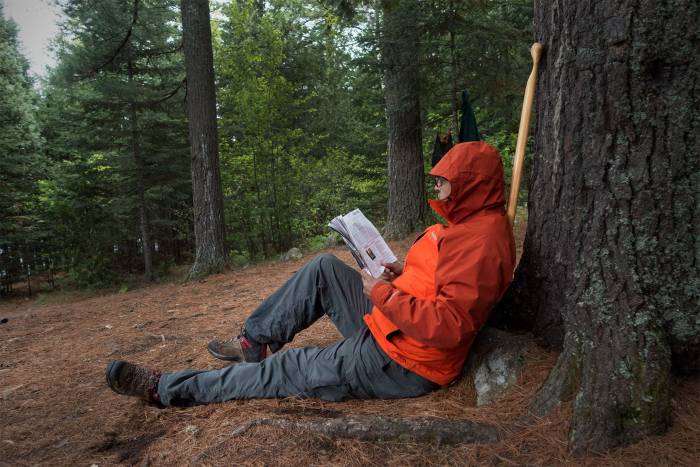 When to Use a Bent-Shaft Paddle

Canoeists are like all hobbyists in that intense arguments might begin on a point of dogma, principle, or, in this case, use. Serious paddlers report that bent shafts can lessen painful shoulder, elbow, or wrist problems. I find them easier on the upper back and shoulders.

Some paddling positions, such as on a seat, can be better for bent paddles. Racers usually use them with shorter shafts, but that might be due to less freeboard on a racing boat. It also cuts down on weight.

Bent-shaft paddles are not good in whitewater because the canoeist cannot brace on the off-side. And, of course, they have to be used in the proper direction, with the bend toward the direction of travel, whereas a straight paddle can be spun around. 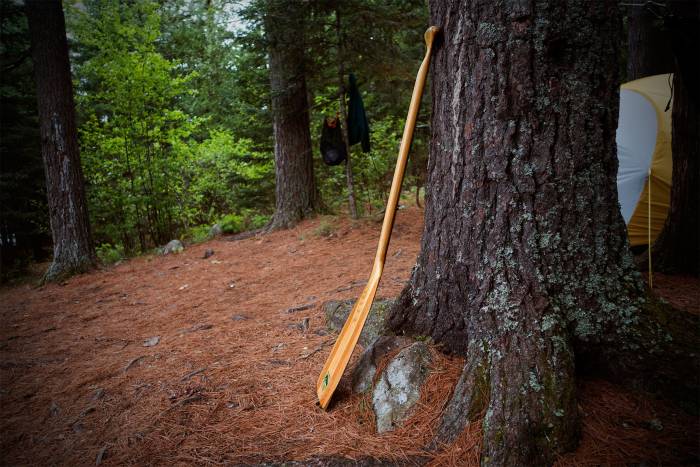 Over the last 40 years, the bent-shaft design has come into common use. That wasn’t the case in 1971, when Jensen, who died in 2004, showed up at a race with a prototype.

“I got a lot of laughs from other paddlers. They thought I’d lost my mind,” he said.

Strange Currents: Canoeing From Communism in the Czech Republic

The history and culture of the Czech Republic is inexorably linked with a beloved watercraft, the canoe. Read more…