Home » Water » Caroling the Grand Canyon: How to Survive the Great Ditch in Winter

Rafting the Grand Canyon in winter is one of North America’s great adventures. One man tells his experience of a winter Grand Canyon raft trip and how to do one yourself.

We’d been floating the Colorado River for a week when James suggested we go caroling on Nankoweap Beach. We hadn’t seen a single person outside of our group in 6 days. Although we had maxed the permit out with 16 people, the solitude was amazing. Just us and the great blue herons, who struggled to rise as if they hadn’t been prepared to move for days. 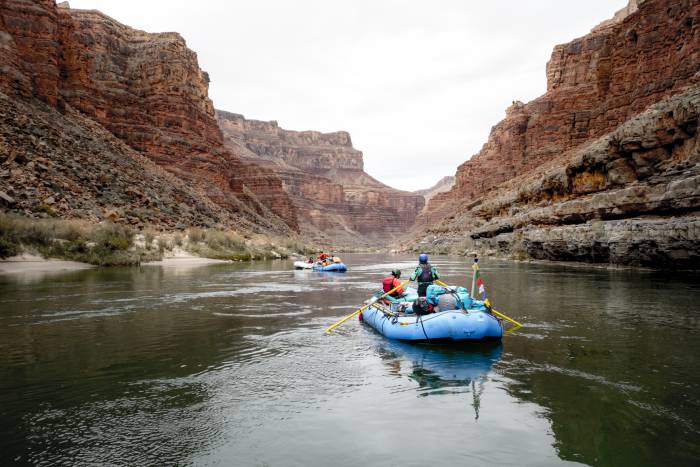 The sun had been kind to us thus far. The cliff walls hadn’t quite closed in, so our dish buckets didn’t contain a layer of ice and our wet clothes hadn’t frozen overnight. Not yet.

Even so, we knew what was ahead. Winter can be chilly in such a sizable ditch. The walls of the Grand Canyon rise over 2,000 feet at times, blocking any chance of the sun making it all the way down to the meandering Colorado River. 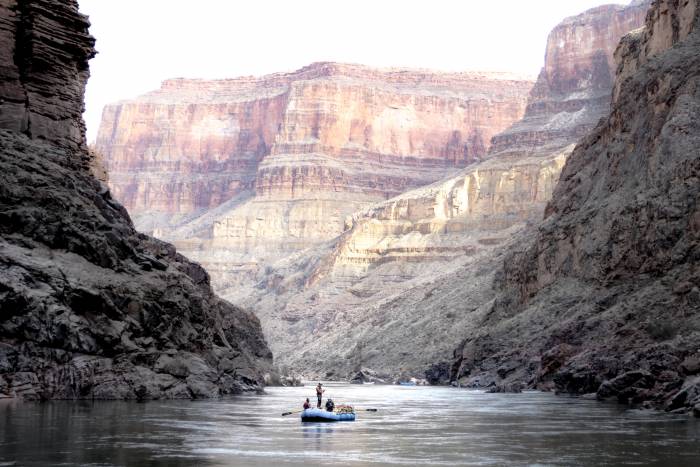 Winter Adventure on the Grand Canyon

On Nankoweap beach, however, a few rays of sun did make their way between the layers of the Coconino Sandstone and Kaibab Limestone, enlivening the crew. We opened the costume drybag and began rustling through 70 liters of goofy clothing and masks.

Cracking beers, we started to sing carols. Christmas was only a few days away, and since we’d be spending New Year’s in the Canyon as well, we needed the practice. With everyone dressed and energized, we were ready to mobilize. We would share our newfound voices with the neighbors that had rowed past and camped downstream. 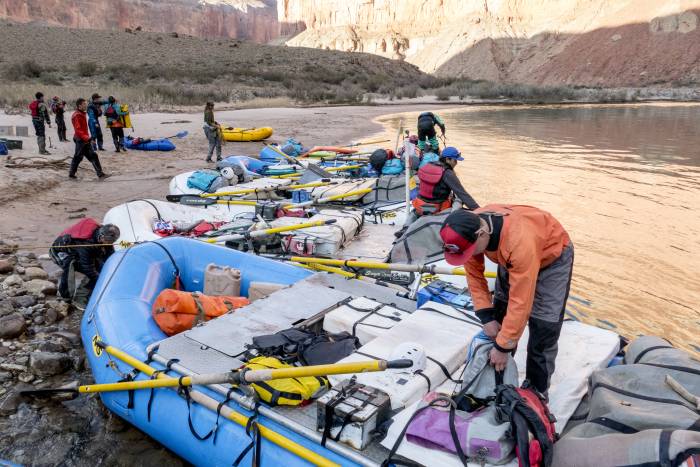 If You Go: Grand Canyon Rafting in Winter

Along with endless scenic beauty, the Grand Canyon boasts a challenge to boaters worldwide. The rapids scale from 1 to 10, with 1 being a ripple and a 10 being impassable (most rivers end the scale at 6!).

The incredible volume of water the Colorado River pushes downstream, at times quite violently, explains the broad range of the scale. The currents bash off canyon walls, creating massive hydraulics and boat-flipping eddy lines even for the most experienced rafters. 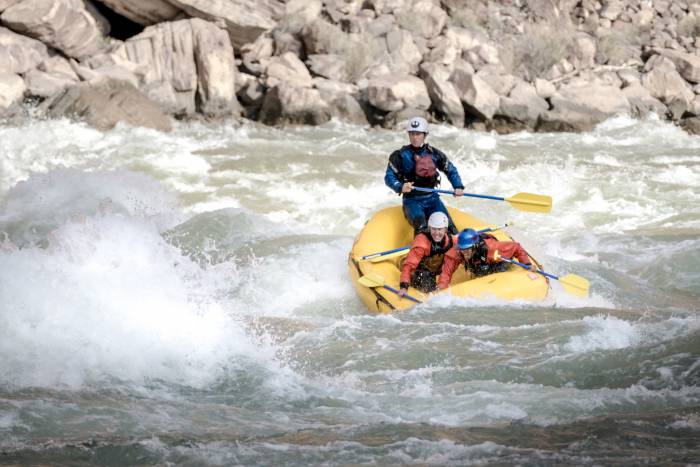 Excitement about what might be around the next corner is what attracted our crew and pushed us daily. Many days we danced as our rafts lazily drifted downstream.

Sometimes we needed a salsa rhythm to warm frozen feet and chilled hands, all in the name of survival and fun. We would shout one-liners at each other, trying to get a laugh. “Life is pain! But the sun will blow up, so who cares?”

Other times, the canyon would echo our situation back to us as we hollered for solidarity: “I feel like I’m an army ant crawling across an ice rink, rink, rink …”

Christmas in the Canyon

So, in that precious sun on Nankoweap Beach, we practiced our showmanship: tie-dyed tights and banana suits, Santa Claus with a blue dry bag slung across his shoulder, elves, magicians, and even a horse drinking beer.

We polished our carol singing, fine-tuned our costumes, and with the shade of evening spreading our way, we were ready for a stroll through the neighborhood. 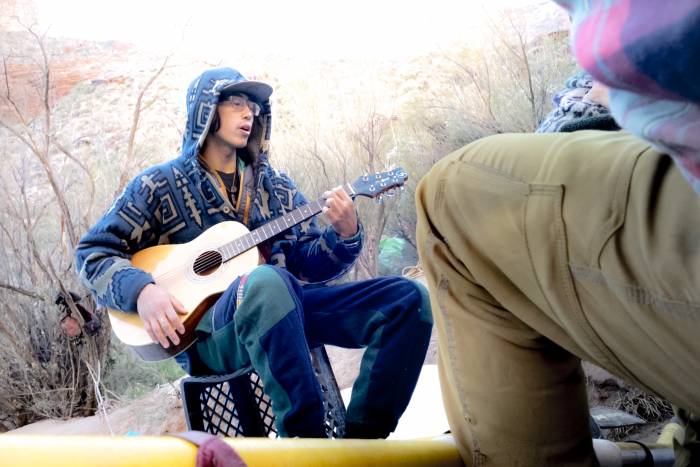 We weaved through the tall brush, picking the course carefully through all the cryptobiotic soil. A type of organism that grows on the ground and takes extremely long periods to develop, it’s similar to moss and lichen, but much more fragile. It made the path toward our friends a living trail.

We didn’t know the other raft folks but always knew they were just ahead of us. So caroling would be our introduction.

We burst into our neighboring camp and discovered the other crew relaxing around the fire and cooking dinner. As we began singing, they circled around, their mouths open wide. Our complete surprise was almost too much for them — we were euphoric, they were shocked. After a carol or two, we broke our choir to meet our new friends. Aside from some small talk, we connected over shared woes about food and fingers.

Throughout the trip, the hands took the brunt of the beating. It wasn’t long before deep cracks started to form. Deep and wide, they were painful enough to wake people up in their sleep, the only cure being salve, gloves, and time. And those in charge of the raft bore the brunt of the damage. 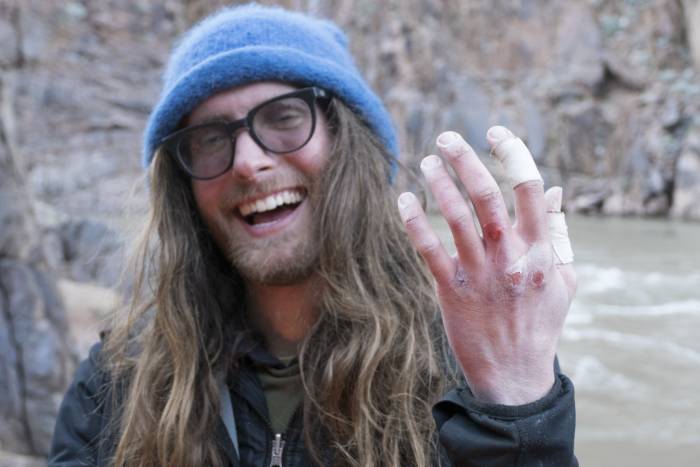 Each of the six primary boatmen had their work cut out for them. Every night they emptied the boats. And every morning they repacked them. Dry bags upon dry bags had to be thrown, tables and cast irons carried to the boats, and camp chairs and fire pans disassembled.

But worst of all, we had to latch everything down with cam straps that had become wet and sandy. Imagine pulling on slippery sandpaper as hard as you can. But they are imperative, holding all the gear down. “Rig to flip,” as they say.

Those abrasive straps could cut viciously into knuckles. An accidental brush could leave a small cut, which isn’t a problem in most places. Unfortunately, between the wet river and the dry air, nothing healed in the canyon. More likely, it got infected.

On the coldest and darkest mornings, our wet clothes ceased to dry and instead froze. On more than one occasion, we had to soak our socks and cam straps in the river to thaw them, a temporary reprieve because everything froze again upon contact with the cold, metal frames of our rafts. 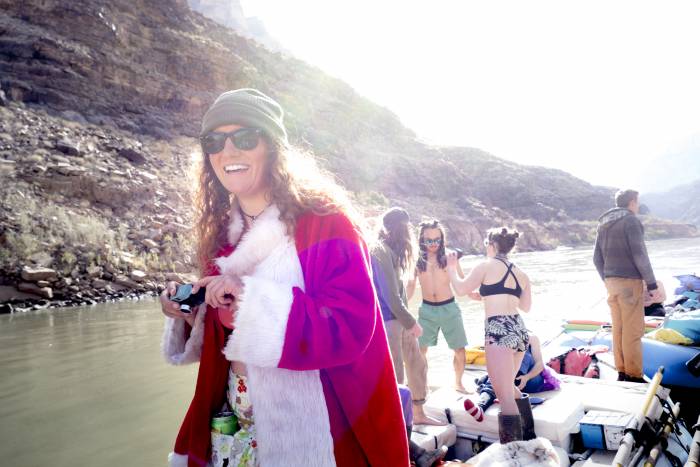 The most vital thing to carry during this time was a positive attitude; nobody should dance with a frown. We found our positivity the best cure for any bad mood. Novelty became a wonderful tool.

Our crew possessed a grab-bag of talents. From climbing to slacklining, silks to canyoneering, we aspired to do it all. At one point, we rigged a highline 115 meters across the Canyon. The crew took turns walking the span of the Colorado River until sunset, starting again at sunrise.

Then, we rigged silks on the line, and more than one person slid out for their chance to dangle over the mighty river, a form of dance and artistry unlike any other. We walked and silked with and without pants (but always with a PFD). 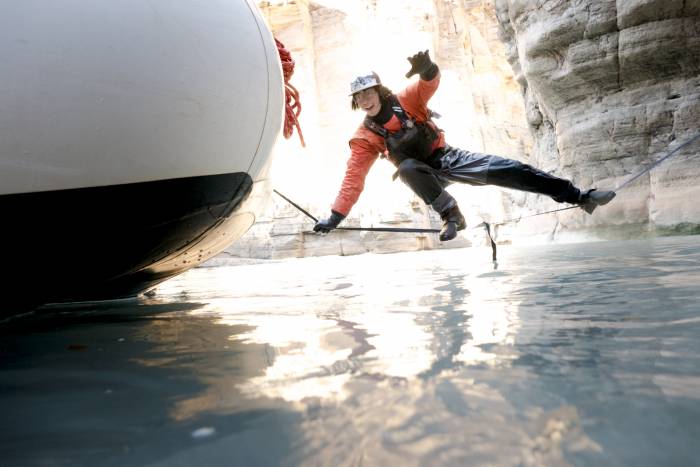 Every side canyon we could manage was thoroughly explored. Some days we stopped multiple times to scramble up a drainage and unlock its mysteries, the inaccessible made possible with some rope for the rappels. Two members of the trip even used the stash of climbing gear, racking up to climb a nearby pinnacle.

We made the most of every situation.

On Nankoweap caroling, we found our new friends were no different than us, with slightly more experience. They were all raft guides from the East, whereas less than half our crew had ever been whitewater rafting. Only one of us had been down this section of river before. As it had to fall on someone, I was the least experienced boatman. 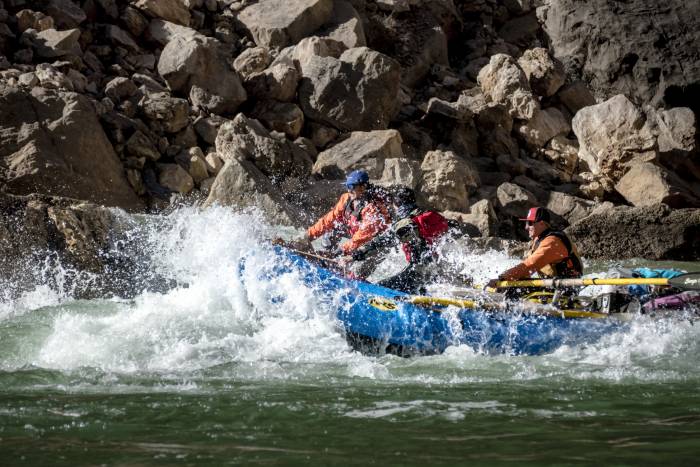 I hoped my one year of rafting experience would help me pick new skills quickly. I had to learn to rig my own boat, how to make a backrest out of paco pads, and what angle the oarlocks should be.

That last one I never did figure out.

But solace came from the crew — a group experienced in the art of building confidence. One man in particular always had the last laugh before dropping a rapid.

“Chew your butterflies before you swallow them!” he’d yell as the power of the current grabbed his boat.

And just before he’d drop the rapid, just as the green water started to swallow his raft and right before the river became a turbulent mess, you could hear him holler, “Good lines or great stories!”