Last week, a team spearheaded by Oru Kayak attempted to paddle from Cuba to the U.S. This guest column explains the endeavor from an insider’s perspective. 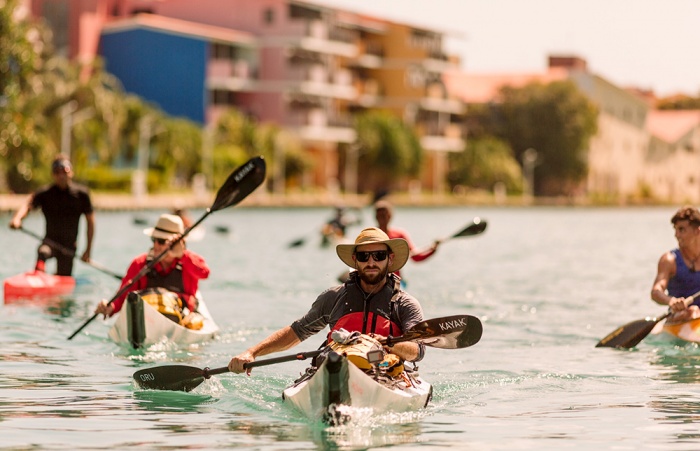 The Oru office is near downtown San Francisco, in a colorful and quickly changing neighborhood. We are surrounded by a diversity of many flavors, which fuels new ideas and challenges old paradigms.

Full disclosure: I’m the marketing director at Oru Kayak and am highly incentivized to promote the brand. That said, I want to make it clear that my goal in this project–both the crossing attempt and the outreach afterward–goes well beyond the reaches of the company. Safe and legal immigration is an issue that affects millions of people. It’s not something Oru or I take lightly. This project was our way to add a voice to an ongoing conversation, with the hope that it would make a positive impact by inspiring others to get involved.

Inside the office, we often discuss the intersection of adventure and impact, and where Oru can fit into the puzzle. The most salient topic is inclusiveness.

It’s not terribly surprising. Our CEO immigrated from Iran, CCO is Hispanic, Director of Operations is a dual citizen, logistics lead is Mexican, Accountant is Vietnamese. and head Engineer is Italian. We come from all over, and we treasure our differences as much as our similarities.

Our purpose, a contribution bigger than fancy folding kayaks, is to use our platform to include new people into the paddling and outdoor world, and when we can, stand in solidarity for larger issues such as immigration. 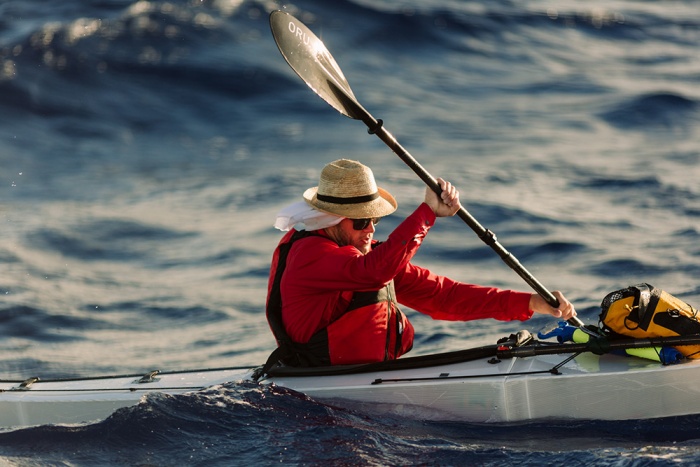 The original idea for the Cuba project came a couple years ago as we watched our good friends from Cotopaxi attempt the same crossing. They paddled the 113 miles in tandem kayaks, with one of their five boats successfully making it from Havana to Key West. While in Cuba the Cotopaxi team met with entrepreneurs and businesses to exchange ideas and build connections.

Inspired by their efforts, we began to muse on how Oru Kayak could do something similar but curated purposefully for our mission and products.

To our knowledge, no one had completed the crossing solo in a kayak–although this is highly misleading. It’s likely that hundreds if not thousands of people have done this before us. They simply do it undocumented. Thus, our mission was not a typical “first” that many outdoors men and women covet. Instead, it is a celebration of recent political changes that made the crossing legal, and in turn, hopefully safer.

After some time on the backburner, the idea returned, invigorated by frustrations with the election last November. Months of logistical planning followed. 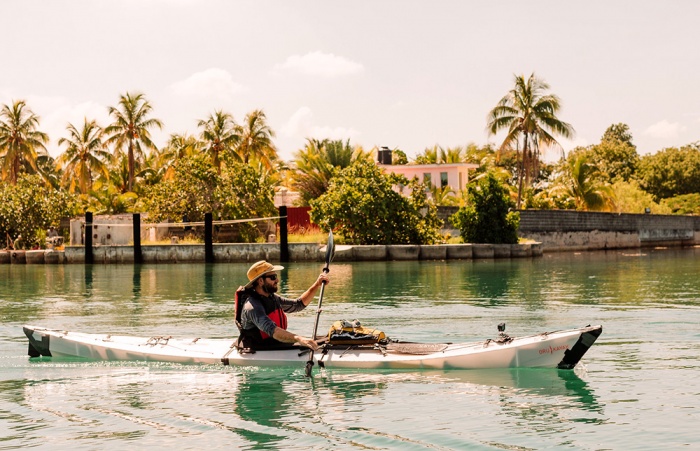 By late spring, we had the most of the plan in place. We would rendezvous with our full team in Miami, shuttle to Key West, pick up groceries, and sail south to Havana. The schedule called for about a week in Havana to wait for a good weather window before the attempt to paddle back to the States. We estimated the paddle would take 30 to 40 hours.

Our plan was to do the entire paddle unsupported, never touching the support boat. This meant carrying all of our food and water with us, never sleeping, and relying only on other paddlers for any problems that came up.

The morning of the attempt we took part in a Cuban press conference with a few TV stations and local publications, met the U.S.-Cuban ambassadors, and paddled out of the harbor with a number of athletes from the Cuban national team.

The whole experience was eye-opening and the emotion at the departure ceremony was palpable. The support from the Commodore, the President of the Kayaking Federation, and countless Cubans we met–from taxi drivers to servers at restaurants–is something I’ll always be grateful for.

They left us with a message of friendship, love, and a hope that the future relationship between the two countries continues to grow in a positive direction.

Four of us attempted the crossing: Wes Siler, a writer and editor at Outside Online; Chris Brinlee Jr., a freelance writer and photographer; Wyatt Roscoe, my support guide and longtime paddling friend; and myself, a decent but far from professional kayaker.

Although we’d never traveled together as a full group, I felt confident in our combined skills and shared attitude. 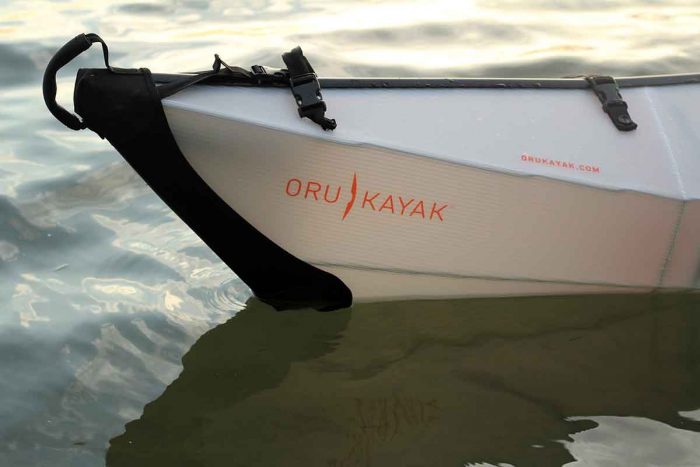 We would use Oru’s Coast XT kayaks, carbon paddles, spray skirts, float bags, and PFDs. Each of us added deck bags, compasses, custom skegs, bow and stern lights, pumps, sponges, paddle holders, and a few other modifications. We all carried 15 liters of water, roughly a dozen PB&J sandwiches, snacks, GPS trackers, and sunscreen, among other small things. At this point we either had what we needed or we’d try to make do.

The weather was hot and humid–roughly 85 degrees without a cloud in the sky. We fared well for the first few hours, finding a rhythm, encouraged by our crew from the support boat, staying hydrated with electrolyte mix, and doing our best to pace ourselves for the long passage ahead.

The weather was roughly what the report said–an east to west crosswind and one- to two-foot seas. We didn’t move as fast as I would have liked, but we weren’t terribly slow either.

Unfortunately, things didn’t play out well after that.

By late afternoon Wes and Chris began to slow, worn down by skeg issues and unrelenting heat. Worried that their slower pace would hurt the chances Wyatt and I had of completing the crossing, both selflessly opted to pull out. A few hours later I fell ill, likely a combination of sun, sea sickness, and possibly bad food (as I write this three days later I’m still having stomach issues).

After puking the first thing I had eaten in hours, I decided to end my attempt. This was probably lucky, as I soon came down with serious diarrhea. Wyatt paddled onward for hours, deep into the night.

Yet, Mother Nature was not on our side. Winds picked up to a little more than 20 mph, seas rose to large five-foot swells, and lightening storms surrounded the boat. We had either completely missed this storm on the radar, or more likely, the weather changed late in the game.

Regardless, the already daunting challenge turned into an even larger beast to bear. To his credit, Wyatt continued to laugh at our bad jokes and kept a smile on his face.

The weather continued to deteriorate and Wyatt, tired from his accelerated pace in the last five or six hours, began to struggle to eat or drink. He fought sickness for almost an hour, puking five or more times, and finally made the decision to call it.

With all of us onboard our support boat, we motored our way to Key West, rocking up and down through rough seas. The mood was muted for hours. Most of us struggled to sleep, even with weary bodies. Our time on the water helped put a lot into perspective, especially the sacrifices of those who completed the crossing with much less, and much more at stake. 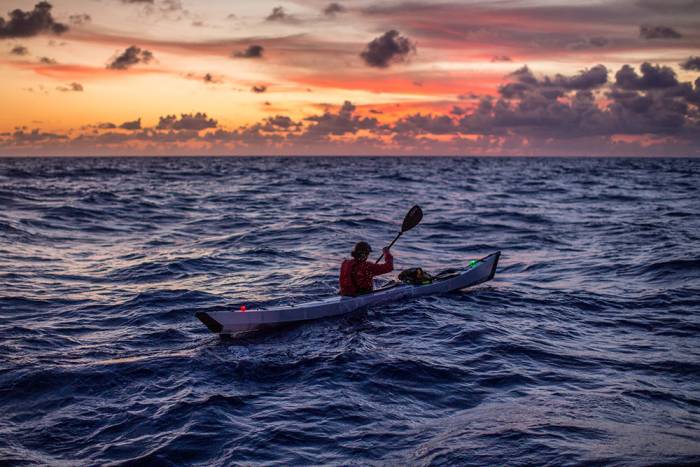 Defeat is a tough pill to swallow. I haven’t felt this humbled in a long time. I’m in awe of those who have done this crossing before us. Yet, even with our failure to paddle the crossing unsupported, I realize the project will only be a failure if we choose to not learn something along the way. It will only be a failure we don’t share the message of friendship and love with the greater community here in the US. That’s what matters most right now.

I am proud of our attempt and incredibly thankful for our crew that supported us the whole way. More importantly, I’m proud to be part of a company that takes on audacious goals, especially ones tied to impact, regardless of financial implications. My hope is that this project inspires others to use the privilege and platform they have to keep critical conversations relevant.

Up Next: Five Kayakers Held Hostage In Post-Peace Deal Colombia