‘I’ve been hallucinating, talking to a tiny spirit baby hanging onto the boat.’ Our editor paddled through glory and despair in the 300-mile Everglades Challenge. 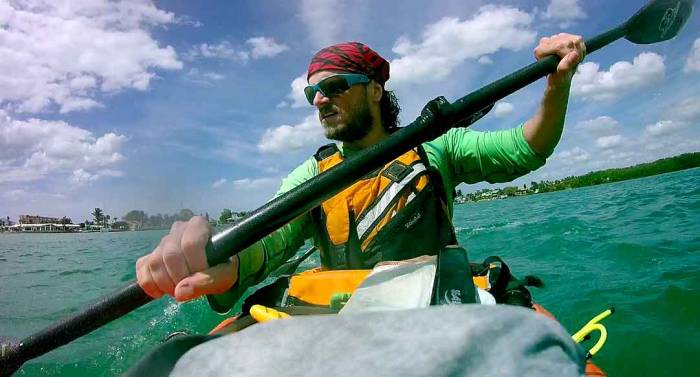 TWELVE HOURS INTO THE RACE we encounter our first manatee. Our kayak stops with an abrupt thud, the ocean exploding all around. Water boils, we brace, adjusting, hoping to avoid capsizing on top of a 1,000-pound sea cow under the hull.

Welcome to the Everglades Challenge, a long-running “expedition-style adventure race for kayaks, canoes, and small boats.” Your goal is to complete a loosely outlined choose-your-adventure course across Florida’s wildest expanse.

The Everglades Challenge dates back to 2001. Founded by waterman Steve Isaacs, the event has become an iconic test of endurance and tenacity for a growing number of hard-core folks angling for membership in the WaterTribe. Isaacs is “Chief,” and upon registering for their first race, new members must choose a tribe name.

I became Piglet. My paddling partner and longtime racing teammate, Dan Staudigel, became the Angry Fat Kid. Both monikers have their own storied past.

The tribe manifesto reads: “The purpose of WaterTribe is to encourage the development of boats, equipment, skills, and human athletic performance for safe and efficient coastal cruising using minimal impact human- and wind-powered watercraft based on sea kayaks, canoes, and small sailboats.”

If the 100 or so boats lined up on the beach (and the sun-grizzled captains) is any indication, that mission is very much alive. 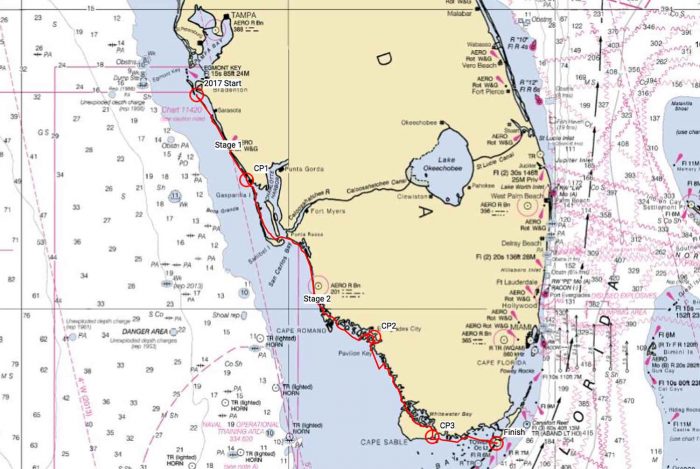 In the 17 years since its first iteration, the race has prided itself on running no matter the conditions. It was canceled forcefully by the coast guard in 2015 when winds were so strong they capsized many of the boats near the start. Since then, Chief and the Coast Guard have had an uneasy truce, with an agreement to not start the race during an official USCG Small Craft warning.

This year had such conditions, so we sat on the beach for a day… waiting. Chief called a meeting, and new rules were set. Racers would have to get their boats across to the other side of the bay, find somewhere to “stealth camp,” and start the next morning. This was a daunting task considering many already sent their cars to the finish line, 300 miles south at Key Largo.

But an amazing thing about tribes is how they work together to solve problems. Hours later, we were camping incognito in our hammocks, just out of site of the gaudy condos that take up most Florida beaches.

The race has only three checkpoints along its length, 60-90 miles apart. This allows competitors to choose any number of different routes. Seasoned racers pay attention to every detail of wind, tide, and fetch. Even the location of high-rise beach hotels can create valuable windbreaks in certain sections.

We were overwhelmed by the scope of it all and focused only on the shortest distance between points, even if it meant paddling headlong into the wind and surf.

Teams are allowed and encouraged to use GPS, and to phone their shore contact (cell service is abundant on the first half of the race) for updates like confirming route choices. But absolutely no physical support is allowed.

As night falls, we fight to stay upright following lighted navigation buoys through the wide and exposed Pine Island Sound. Not wanting to suffer a disastrous flip, we paddle without lights, the moonlight letting us see the incoming waves better.

At 3 a.m., the sound of a speeding boat, also with no lights, startles us. We flick on headlamps just in time to alert it and avoid collision. A minute later, it returns, lights blazing. A police boat.

In the ensuing dialogue we are called idiots in 20 different ways. Incredulous warnings of outlaws, manatees, and bad weather admonish us over the wind. All the while in the heavy water, we try desperately not to flip in front of them.

A sleepless night leads to a bizarre second day paddling along Fort Myers beach in crystal-clear water. The high-rises protect us (and the droves of bikini clad beach-goers) from howling winds.

We paddle for hours just 20 feet from the beach, moving at 7 mph as we weave through bronzed bodies playing in the placid water. And then, that night, civilization disappears completely.

The second half of the course is a stark contrast to the first. Once south of the Naples coast, racers pass into the area known as Ten Thousand Islands. Here, there are almost infinite route choices as the coastline becomes a maze of jumbled islands and mangrove channels.

Tides can bring the strongest paddlers to a standstill or make them feel like superheroes if flowing the right way. Further still is the fabled Everglades, the only area in the world where crocodiles and alligators live side by side.

For 100 miles, signs of humanity vanish. Cell service is nowhere. Stars (and mosquitos) are everywhere.

We stop for 90 minutes of sleep on a tiny island at the edge of the world. Paddling on before dawn, we fight tireless wind, struggling in the open between the minimal shelter of mangroves.

The shortest route requires us to head far offshore and into rough water to cut a corner, saving 10 miles of island mazes. Five miles out, we are sure our boat will break in two. It crests another huge swell head-on and it shudders as it slaps down on the wave’s back.

If we capsize, we’ll never get back in the boat. We’ll be forced to choose between a long survival swim or activating our required PLBs (personal locator beacon) and (hopefully) a coast guard rescue.

The ‘Keys’ To Victory

Dan is first to pee in his shorts. I try to hold it as we desperately change our course to angle closer to land, shortcut be damned. But soon I break too, and for the next 18 hours we urinate where we sit. We manage to keep the boat afloat even as our dignity sinks. 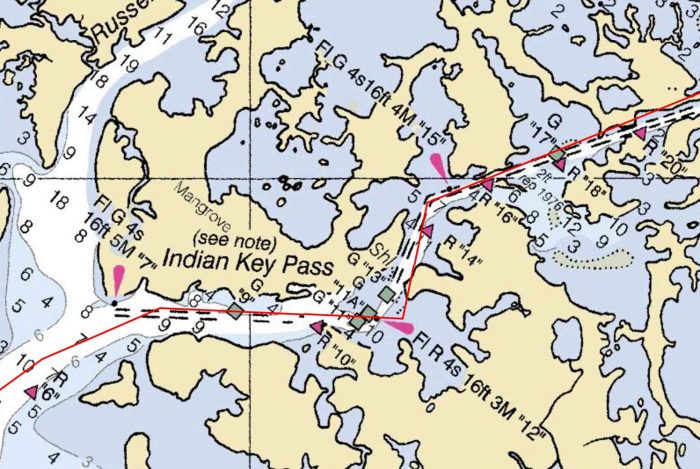 The final leg of the race is across the Florida Keys, a vast expanse of water with an average depth of less than three feet at low tide. It is crisscrossed with dredged channels and secret passages with names right off a pirate map: Crocodile Dragover, Twisty Mile, and Tin Can Alley.

Veterans know that this 35-mile section usually decides the race. The lack of windbreak means even a gentle breeze whips up punishing conditions. Two years ago, it took the winning team 24 hours to paddle the last stretch, robbing them of a new course record.

It’s broad daylight now and I am seeing things. I’ve been hallucinating from sleep deprivation for nearly 36 hours, talking to a tiny spirit baby that is hanging onto the front of the boat.

Dan keeps calling me by the wrong name as I morph into ghosts of his old teammates and high school friends. We’re pulled out of our visions by another boat, a team of two in a tandem kayak like ours. We recognize the father/son team — “Iron Bob” and “The Juice” — veterans of seven previous Challenges and four-time winners.

After 260 miles we are amazed we can still actually race. Competitive fire burns away the fatigue, and we start a ferocious battle. We paddle faster, but Iron Bob and Juice’s experience helps them paddle smarter, missing hidden sandbars and avoiding speed-sapping shallows.

We try to follow them while they hope we’ll break away in the wrong direction.

For most, just surviving the Everglades Challenge is a life’s triumph. While it is a race, the Tribe’s richest stories are about the unexpected experiences of the journey. 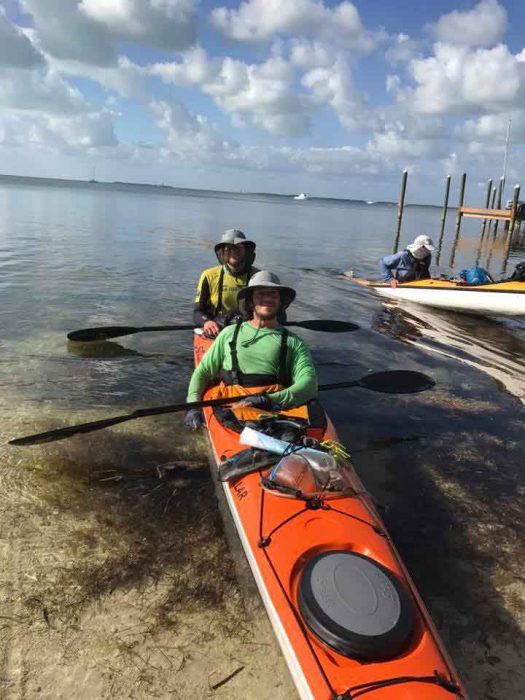 We’ve each paddled nearly 200,000 strokes as we approach the final miles, and we never once saw another team until now.

We’ve taken a small lead, and I stop paddling and look back to study their faces. Salt crusts deep lines of “epic” etched in their faces. I want to know their story and to tell them ours. “Let’s finish together,” I offer.

Genuine smiles, shoulders relax, they agree. We paddle the last few miles together telling stories, sharing hallucinations, and most importantly, prodding them for simple wisdoms that come from years of experience. Namely, “How can we stop peeing in our boat?”

–The author, Jason “Piglet” Magness, and teammate Angry Fat Kid, along with Iron Bob and The Juice tied for first place in the 2017 Everglades Challenge (kayak category), beating all the other boats save one sailboat.

Up Next: ‘Canoecopia’ Expo: New Paddling Gear For 2017