Can an origami ‘folding’ kayak manage the rigors of a multi-day, whitewater river trip? We paddled an Oru Bay ST 45 miles down the John Day River to find out.

The sun was about one finger above the horizon when I entered the swift water under a canyon wall. The rapids were pretty casual, class I or II, but with high flows, powerful eddies threatened.

The foldable Oru kayak jerked under my body, threatening to roll me into the chilly John Day River. I reacted with all my might, bracing a paddle into the roiling current.

“Not today!” I screamed in my mind. The boat coursed through the last of the rapid, a swim averted, while a charley horse throbbed in my leg from exertion. 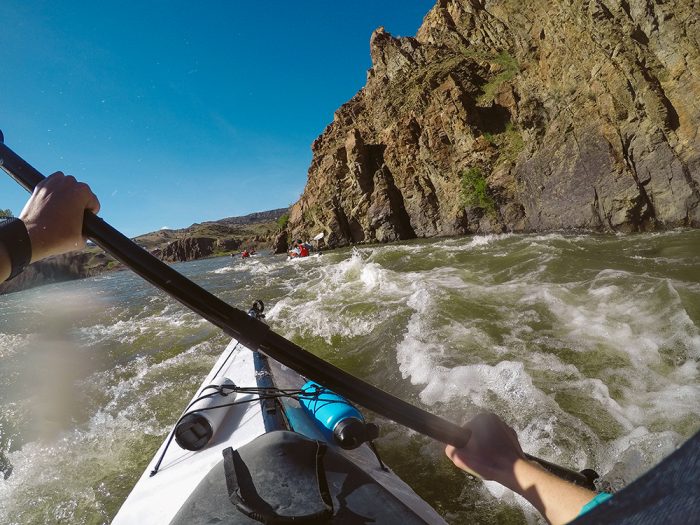 I’m no expert paddler, so hopping into a folding kayak for 45 miles of fast water was a little daunting. But after two days and three nights on the water carrying food, clothing, and shelter in the vessel, I must admit, Oru built a capable craft here.

Oru Bay ST: A Real Kayak That Folds Down Small

The Oru Bay ST is a wonder of origami and product design. Made in the USA from corrugated plastic, Oru kayaks are remarkably light and fold to the size of a small suitcase. Indeed, on this trip, we fit eight folded kayaks into the 5’6″ bed of a pickup truck. It’s also darned light, at just 26 pounds.

And while most Orus are used by folks for day trips and jaunts to the local lake or beach, the brand wanted to demonstrate that these are for real, serious boats capable of modest expeditions.

So I joined brand co-founder Roberto Gutierrez and Director of Marketing Andy Cochrane for a paddle of the John Day River in Oregon. Over two days, we crossed 45 miles and several sections of whitewater. And while it’s a fairly tame river (we paddled class I and II rapids), the high spring flows added a level of challenge.

In short, the Bay ST held up well to the task of hauling people and gear down the river.

The Bay ST is a 12-foot folding kayak. It has modest upgrades for 2017 compared with the Bay, Oru’s original kayak that launched the brand to Kickstarter success.

The Bay ST costs $1,600, a significant investment. But given its remarkable space-saving design and good performance, it’s worth a lot for those with limited room and a desire to paddle. 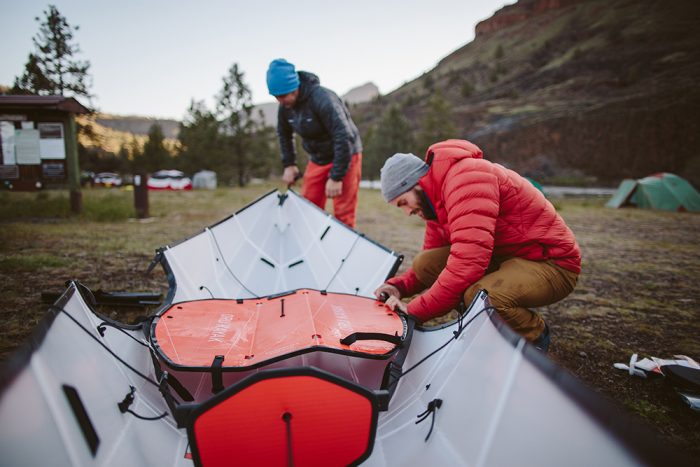 Putting the kayak together is pretty easy with direction. Just unfold, clip a few points together, and slide plastic brackets over some rails along the top of the kayak to hold it together. 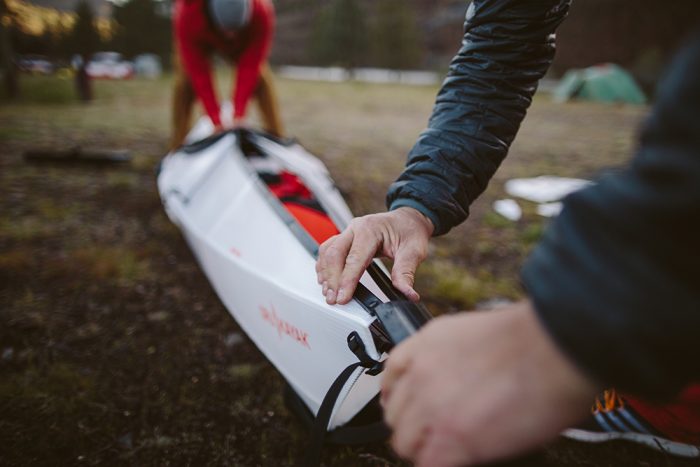 All told, it takes about 15 minutes to assemble these kayaks, less if you’re good at it. I watched Gutierrez slap one together in about five minutes during a demonstration.

The Oru handles as you’d expect from a 12-foot kayak, but because of the hard lines formed at folds, it tends to turn quickly and is slightly jerky when it starts to roll. Where other kayaks have smooth curves, this one has straight lines. I didn’t find this a problem, but it does affect how the boat feels in the water.

The boat handles rough water fine, whisking a paddler over waves. On flat water, it tracks fairly straight for a short boat without a rudder. A full-size sea kayak with a rudder would steer better in wind, but don’t forget, this thing will fold up and fit in the trunk of your car.

The Oru Kayak is a 'real boat' that fits in a backpack. We put it to the test in Minnesota lakes for this review. Read more…

It’s worth noting that the Oru is a pretty wet boat. Even with a spray skirt, a lot of water gets inside due to some openings at the front and rear. While they’re covered with neoprene, water still got in during my paddle with every big wave. So plan to use dry bags as you would with any boating trip.

Also worth noting is that three people rolled over and had to swim small rapids in the trip. The kayaks held up fine. No gear was lost, and nobody was hurt beyond some shivers and possibly wounded pride.

I was pretty impressed at the amount of gear I could stow in these boats. In a group of seven, we carried three tents, plenty of food for three days, clothing, camera gear, fishing equipment, and random extra gear.

The design of these boats means that instead of hatches, you must slightly disassemble the boat to access gear inside. It’s easy, although it’s important to not pack too much. I had one dry bag that barely fit, and it required a second person to hold the boat shut while I closed the top rail system. But it worked.

Oru doesn’t have a specific-size bag for these boats just yet, but I’d plan to use a few small dry bags per boat to carry gear instead of one big one. It just fits easier.

Rolling On The River

The John Day river is the third longest undammed (free flowing) river in the contiguous United States. A tributary of the Columbia River, it flows approximately 284 miles across northeastern Oregon.

The river is renowned for smallmouth bass fishing, and our party landed several nice smallies in a few slow-moving eddies along the route. I had trouble getting one hooked on a fly rod, although I had several nice strikes.

Floating the John Day is spectacular, and worthy of a bucket listing for anyone who loves remote nature. We didn’t have cell phone service for the entire trip, a blessing to anyone who just wants to get away.

And the Oru Bay ST was a worthy vessel on this trip. For those with limited storage space or small vehicles that want a kayak that can go from the beach to the river, it’s a solid choice that can extend into overnight travel.

Up Next: No Sleep, Keep Paddling: Kayaking 300 Miles In ‘Everglades Challenge’