When road-tripping across America, Nebraska is a long nothingness in the middle nowhere. Our correspondent found an unlikely adventure with old friends on an empty river.

“You want to get on the river tomorrow morning before you leave, brother?” KC asked this with his head (and his smile) tilted to one side. We sat across from each other at his kitchen table. His wife, my friend Beth, was putting their son to bed down the hall.

I had driven all day, from my family’s cabin on an island in Lake Michigan, to get to their farm on the outskirts of Omaha. On the drive toward town, the staleness of stretching farmland was broken only by sock-you-in-the-face pungencies. But there’s more than road apples and cow patties off of I-80, I would soon discover.

At the house, I scooped up my dinner, huevos rancheros made with eggs plucked from the coop just steps from the backdoor. I thought about what getting on a river would look like in Nebraska.

I envisioned KC and I falling out of a tippy canoe and into a cold Platte River. It was a long drive through the grayness of a Wisconsin early summer rain and into the daze of Cornhusker country’s unchanging landscape. I was tired, stiff, road-weary, and had to get to Denver by the next night. My first inclination was to say no to the river and yes to sleep. “Uuuuum, what were you thinking?” I asked.

“Well, we’d have to get up pretty early. We could snag the paddleboards from my folks’ place…” My face furrowed with surprise. There’s SUPing in Nebraska?! Sometimes I think that Colorado is the only state in America where anything outdoorsy happens, other than fishing, hunting, shooting cans with bb guns, and freezing you ass off while cheering at football games.

The stupor from the drive lifted as KC described what could be our morning: SUPing a six-mile stretch of the wide but shallow Platte River (which was first named the Nebraska by the Pawnee and later changed by the French, though both names mean flat). 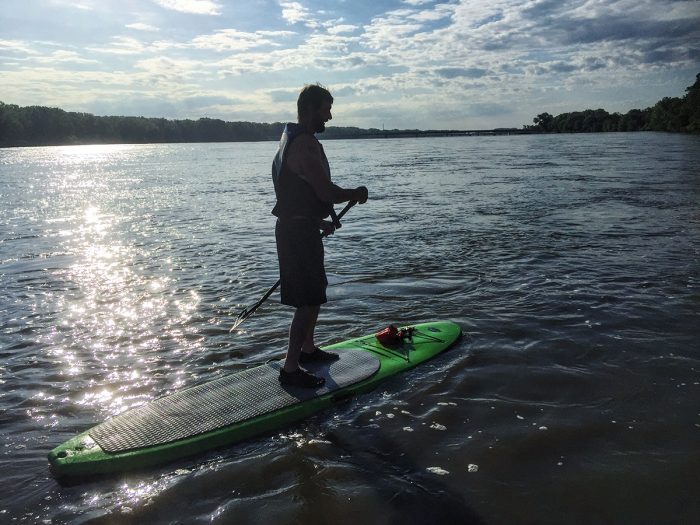 I fought off the idea that I had to get on the road early, get back to Denver, get back to the mountains. I had no appointments or meetings to be kept, just the “I am on the road and have to get to where I am going” mentality. But I was curious and that was enough to say yes.

Where the mud met the water at the put-in, KC launched into the river like a surfer and paddled out into the middle using his arms like Bodhi from Point Break. The mosquitoes silently attacked my calves as I stood and watched, ankle-deep in the surprisingly tepid water. The river coursed without much sound, except for tiny gurgles and small dark brown sticks bobbing in bubbles of froth.

I jumped on my board, both feet landing with a thud, and pushed out to join KC in the green gold ribbons of glimmer. The sun poked over the top of the trees lining the bank. It was warm and the breeze was calm and consistent. This did not match my idea of cattle country.

We were done in 25 minutes. A stretch of river that should have taken us an hour or more was sped up by a fast flow, the result of recent rainfall.

There are a few SUP outfitters in the Omaha Area. Check Driftwood Paddle Adventures and The Neighborhood Offshore for tours, rentals, and advice on lakes and river access in the region.

Though quick, the river was mellow and relaxing. Everything shimmered with the glint of waking morning. KC and I told jokes and laughed at one another’s impersonation of what his neighbors might say. “Did y’all see those idiots with the surfboards on the river?!” and “Hey look, look at them boys standin’ on the daggone water!” 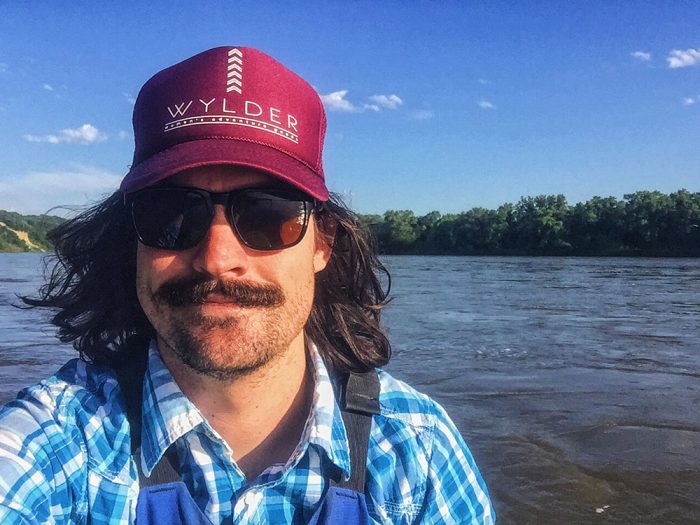 In the end, it was a fun, quick trip down a river. Nothing more or less. But it did stand out as surprising, and it solidified my belief in always saying yes to adventure.

Up Next: ‘Chasing Niagara’ Film Features Waterfall Hucks Around Planet