Amy and Dave Freeman spent a year in the Boundary Waters Canoe Area in 2015 and 2016. Just released, the book ‘A Year In The Wilderness’ tells their story.

One September day in 2015, Amy and Dave Freeman packed up their canoe and paddled into the Boundary Waters Canoe Area. Twelve months later, they returned to their starting point at Birch Lake.

They did it to defend America’s most-visited backcountry destination—the Boundary Waters Canoe Area Wilderness. More than 1.1 million acres of unspoiled lakes and woodlands along the Minnesota-Canada border face a threat from sulfide-ore mining.

At the time, Twin Metals Minnesota hoped to construct a mine complex on the edge of the Boundary Waters, inside Superior National Forest. 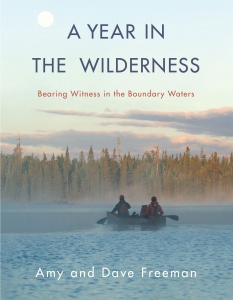 The location of the proposed mine threatened to pollute the BWCA. Any spills would be hard to mitigate and likely spread rapidly. A single mine in this watershed could continually pollute the wilderness for at least 500 years.

“A Year In The Wilderness” recounts their year in the Minnesota wilds. They released it on September 23rd, one year after exiting the Boundary Waters.

Minnesota winters aren’t for the faint of heart. The -30-degree air temps and blustering wind would keep any sane person inside.

Read for a peek at their preparation days leading up the expedition.

Love what you see? Pick up a hardcover edition for $27. Want to get involved in preserving the BWCA? Visit SaveTheBoundaryWaters.org to learn more about the issue.

Excerpt: A Year In The Wilderness

It was 11:00 p.m. on September 22, 2015, and we were busy sifting through the boxes of food and piles of gear strewn across our pre-expedition headquarters in a friend’s home near Ely, Minnesota.

Inside, the hardwood floors creaked and groaned. Outside, the moonlit silhouettes of black spruces through the window were a reminder of where we would soon be spending an entire year.

At that moment we were just ten miles south of the Canadian border and only a couple of miles from the next day’s destination: the Boundary Waters Canoe Area Wilderness, a roadless, million-acre maze of forests, lakes, wetlands, and rivers.

As we moved from pile to pile, worries and questions churned through our restless minds. Are we packing enough food? Should we bring two or three folding solar panels? Which charging cables do we need—and why does every electronic device seem to require a different one? Did we update all of our automatic bill payments and provide a forwarding address for our mail? Will our parents be able to get a message to us if Gran gets sick? How are we going to file our taxes in April?

And—perhaps above all—why are we worrying about laptops, digital cameras, and a satellite terminal before heading off on a canoe trip?

Weeks of frantic planning, organizing, and packing had led up to what was, for us, such a familiar act—piling food and gear into a canoe and paddling into the wilderness. We tried to tell ourselves that we had done this hundreds of times before and that the following day would be no different: we would load the canoe, zip up our life jackets, hop in, and paddle away.

But of course it would be different. In the morning there would be TV cameras and reporters. If all went as planned, a flotilla of canoes, pontoon boats, kayaks, and paddleboards would escort us to the Wilderness boundary, and we wouldn’t follow them out—much less lie in a bed, flip a light switch, or flush a toilet—until the earth had completed one full rotation around the sun.

Slowly the items we would need during each season found homes in fourteen plastic bins stacked along the wall, waiting to be neatly labeled. The electronics might have seemed the most daunting and out of place on such a journey, but they were quite possibly the most important pieces of equipment we would carry.

Up Next: When One Raft Isn’t Enough