Four Wheel Campers is probably one of the best-known pop-top slide-in truck camper companies out there. Its full-featured rugged campers have traveled the globe since the company’s founding in 1972.

The concept behind Project M is to blur the lines between truck topper, rooftop tent, and full-featured slide-in truck camper. From the outside, Project M mostly looks like a traditional Four Wheel Camper.

The difference though is that Project M attaches to the truck bed rails, has no floor, and is completely empty inside besides a bed in the pop-top.

The matte-black, diamond-plate exterior on the prototype camper looks like it belongs on a construction contractor or ranch truck. Luckily, Four Wheel Campers will also offer some clean smooth-sided aluminum options that should look way higher-end.

Most lightweight pop-top truck campers on the market, like the AT Overland Summit and Go Fast Campers Platform, offer a contoured truck topper that is sleek and matches the width of the truck cab.

The Project M is instead very boxy, with vertical sidewalls, like the OVERLND Pop Top. While this doesn’t look as aesthetically pleasing or offer smooth aerodynamics, it does offer more interior room, a bigger sleeping platform, and the ability to have seating areas in the truck bed with vertical backrests.

Like all Four Wheel Campers, the Project M is constructed from an all-aluminum welded frame. The frame is then clad in an aluminum skin and fully insulated. 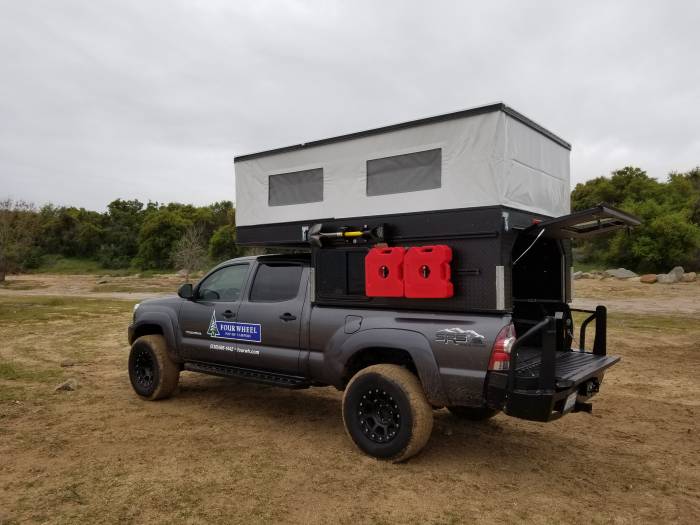 Four Wheel Campers advertises that this insulation “provides comfortable sleeping at or below 30 degrees.” With no heater on board and no insulation in the truck bed itself, we’re not sure how the brand verifies that claim. On the other hand, you can sleep out of the elements in a good sleeping bag in nearly any temperature.

Project M comes standard with three windows. You get one on each side and one in the tailgate. More are available as options.

The pop-top system is carried over directly from the slide-in truck camper models Four Wheel Campers has been making for over 40 years. It’s super-quick to set up and break down.

The system is a full-pop design, which offers the most standing room in the truck bed and the most room to roll around in the bed. The pop-top walls have four large openings with bug screens, clear windows, and blackout shades.

Project M campers are also prewired for solar and batteries. This allows you to easily upfit the camper with a full self-contained electrical system. Think 12V fridges, lighting, and electronics charging in the camper. This will be a no-brainer upgrade for most people.

A big downside to the Project M is the weight. Four Wheel Campers lists it at 425-500 pounds. While that’s considerably lighter than the brand’s full-featured campers, it’s the heaviest offering to date in the lightweight pop-top truck camper category. 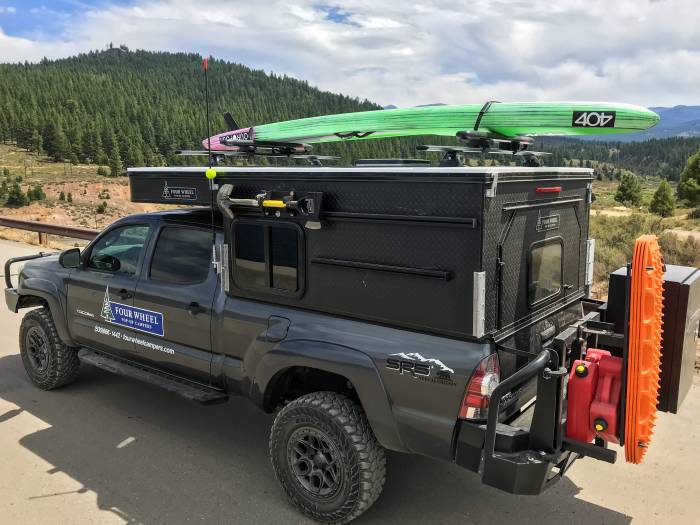 The base price will start at $8,995, with additional upcharges for 8-foot truck bed models and accessories. Again this is a great deal when compared to the rest of the Four Wheel Campers lineup, but it’s one of the most expensive units in this category.

While roof carry capacity hasn’t been expressly stated for Project M just yet, it’s the exact same roof construction as Four Wheel Campers’ other models. The brand stated, “When carrying luggage, coolers, kayaks, canoes, etc. on the roof, we recommend keeping the total weight about 100 pounds.”

That should be enough to support about two whitewater kayaks and the rack itself, but not much more.

Key Benefits of the Project M

The features that set the Project M apart from the competition are the massive sleeping platform, optional camper jacks, and international dealer network.

The Project M comes standard with jack brackets at all four corners like a traditional slide-in truck camper. No other camper in this lightweight pop-top category offers this feature. The jacks themselves are an option. This is the heaviest camper in this category as well, so jacks for removal are a very good idea.

Most campers in this category are offered directly from the manufacturer or have a very limited dealer network. Four Wheel Campers, on the other hand, has 15 U.S. dealers and eight international dealers.

This dealer network and shared parts with the other camper models in the brand’s lineup should make service and repair much easier for Project M campers than the competition.

Besides an official name for the Project M, Four Wheel Campers has more in store for this camper soon. It plans to offer modular interior drawer and cabinet modules for organization. The brand will also offer rack solutions for outdoor gear, like bicycles, for indoor locked and secure transport.

For an in-depth look at all things lightweight pop-top truck campers, check out “The Lightweight Pop-Top Truck Camper Revolution.”

Up Next: INEOS Grenadier: What the Land Rover Defender Should Be

Saving…
INEOS Grenadier: What the Land Rover Defender Should Be
Space-Saving Solutions for Campervan Living
×