Home » Camper & RV » The Key To This Happy Marriage? Live In A Van

Meet Matt and Sarah. They’re married, happy, and live in a van… 365 days a year. 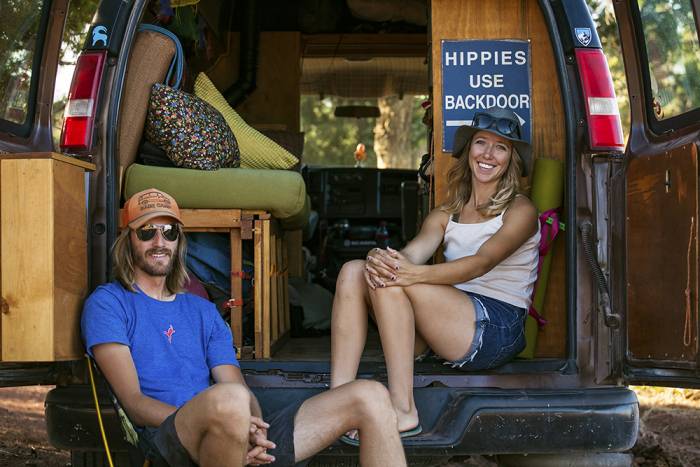 A GROWING NUMBER OF YOUNG PEOPLE ditch “normal” life for the mobility and freedom of living in converted vehicles. Carefree spirits, hipsters, and dirtbags embody this so-called #VanLife existence.

I met a couple whose “van life” holds the secret to their married life. Matt and Sarah Park are in their late twenties and have lived out of a converted Chevy Express for two years.

After a few days on the road with the pair, I discovered their partnership thrives on the challenges of living in a van 24/7. Indeed, their unique lifestyle might give hints at what it takes for any marriage to thrive.

Work Together, Play Together

I first met Matt and Sarah at a rally in Carbondale, Colo., during the 5Point Film Festival. They won “best in show” for their Chevy, a vehicle so beautiful and charming you’d never guess it was an old work van.

The Parks did all their own renovations, including the paint job. While the setup is great for road trips, their life isn’t just about travel.

The couple spends most of their time around central Utah working at a gear shop or guiding. The rest of the time they’re climbing, skiing, or playing in the Wasatch Range and beyond.

“With this van, we’re able to go out and do more of the things we love instead of just living in a van,” Sarah told me.

Last winter, they worked a few days a week in an outdoors shop in Salt Lake City. During the summer, the couple works as canyoneering and climbing guides around Zion National Park.

They take jobs that keep them mobile and free. The point of the van is to help them live better and to keep them from cluttering their lives with things (and expenses) that take away from what they want out of life.

Focus On Each Other

When not working, Matt and Sarah wake up at their leisure, making coffee in an AeroPress and cooking breakfast on a Coleman stove that’s built into the countertop.

At night, Sarah usually cooks dinner while Matt reads aloud to her (there’s an impressive library in the van). After dinner, they pull out a platform, turning their couch into a bed, and then read some more before falling asleep. 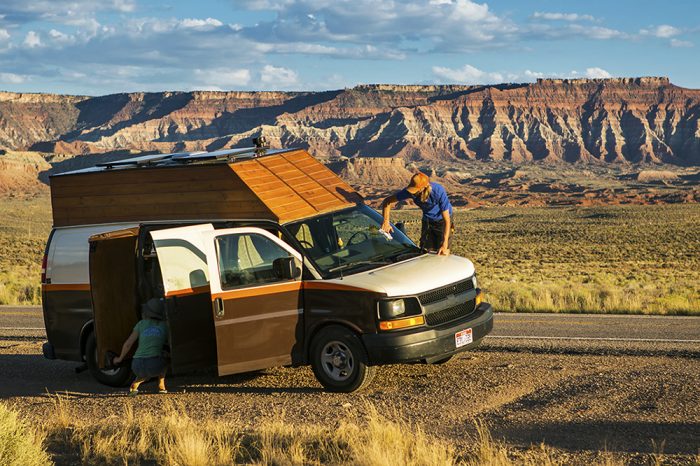 Matt and Sarah smiled the whole time I asked them questions about being married and living in such a small space. They endured some trials, for sure. But they came out of the other side with wisdom.

“You get to go to sleep with your best friend in your grown up fort,” Sarah said with a laugh.

She continued, “You’re never going to be closer to someone than if you decide to live in a van with them. That’s one of the biggest pros — incidentally, that’s also the biggest drawback.”

Being married and living in a van poses quite a few challenges. Space, obviously, is extremely limited. When arguments arise and tempers flare, there are not a lot of options.

“You can’t just go sit in the next room to cool off,” Matt said. “It’s a pretty unique experience that most couples don’t go through.”

“Learning how to communicate and work together is a big part of living in a van with your spouse,” Sarah added.

It’s easier to understand how a single person could fare with this kind of lifestyle. But it isn’t easy to live in a space so small with a significant other. So why do it?

Matt described when they were first married and living in an apartment: “We spent most of our time just working to pay for our apartment and all those expenses that go with a permanent place to live.”

He said the apartment was essentially an anchor they didn’t need. He lived in a ’78 Volkswagen Westfalia when the two first met. On their second wedding anniversary, they ditched the apartment and opted for the VW.

“That first year in the bus was tough,” Matt said. “It didn’t have a heater and it wasn’t insulated very well. We’d drive wearing our ski pants, puffy jackets, and gloves just to stay warm!”

If they were going to keep the lifestyle, a different vehicle-home was needed. The old VW had to go.

They bought the current van. Then reconstruction began.

At the same time, the Parks sorted their stuff and determined the very bare essentials to keep. Fewer possessions and a new van brought new life to their young marriage.

“I don’t think we could ever go back to the same life we came from,” Sarah said. “We’ll always come back to a more simple life.”

Want to see more of married life from the van? Check out The Bus Life on Instagram for posts and updates by Sarah and Matt.