Venture RV built the forward-thinking Sonic X as a design study to create a buzz at the RV trade show back in March. That it did, and now it’s bringing the creative RV trailer to market in 2020. RVBusiness noticed — and named the Sonic X the 2020 RV of the Year.

There were quite a few innovative RVs in the running this year for the RV of the Year award. Most finalists for the award offered a single new design or component breakthrough. RVBusiness chose the Venture RV Sonic X because it “[bridges] the gap between creative thinking and sheer marketability.”

Venture RV was able to take nearly every feature from its Sonic X concept trailer and bring them to production. Sure, it shed the carbon fiber walls in favor of fiberglass. It also went from nine solar panels to four. But these changes help keep costs reasonable.

In some areas, like water filtration, Venture RV was actually able to improve upon the prototype.

“We upgraded the water filtration system to truly be a one-of-a-kind system that will draw water up to 75 feet away, from a 6-foot drop,” said Aram Koltookian, president of KZ RV (Venture RV’s parent company).

“It first goes through a 5-micron filter, then through an active oxygen generator and yet another micron filter. So it removes all of the contaminants — iron, lead, sulfur, all of those things that make water taste foul — and sanitizes the water system.”

That type of high-quality, self-sufficient system is often reserved for high-end overland-style builds. 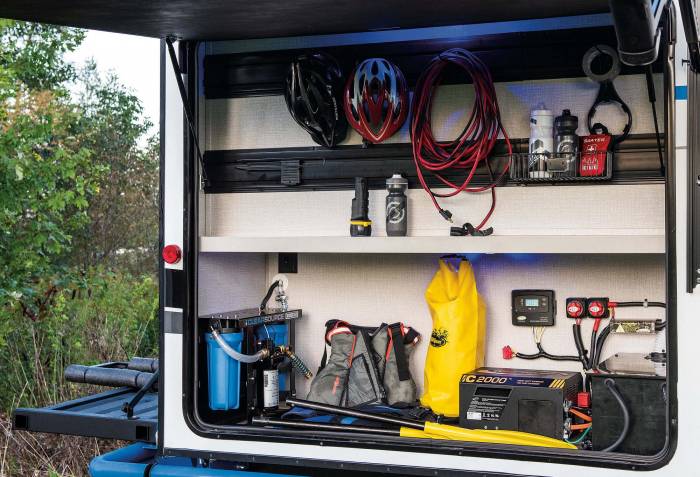 The Venture RV Sonic X creates a full-featured off-grid base camp for active outdoor adventures. Two floorplans are on offer, one with a rear bath and another with rear twin beds, and both have a single driver’s-side slideout.

The Sonic X is ready for light off-road adventures and has enough onboard capacity for living off the grid for weeks at a time.

With aluminum framework construction, good ground clearance, and 15-inch AT tires, the Sonic X should be relatively off-road capable. It also has rock guards, a tubular nerf bar bumper system, and LED light bars in the front and back to complete the rugged off-road look. 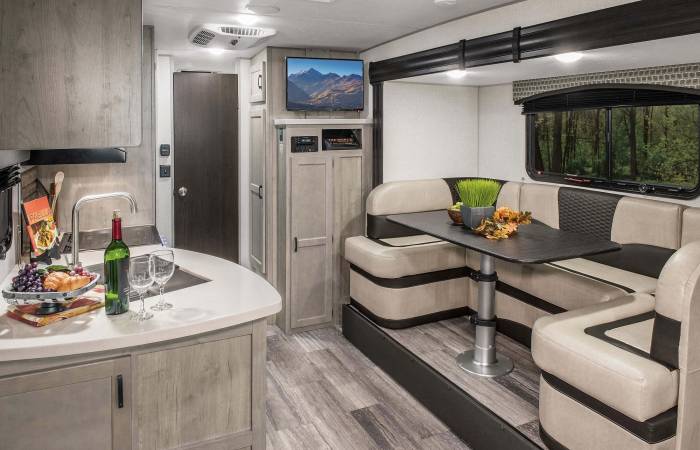 The base Sonic X weighs in at 5,220 pounds. It can handle up to 1,780 pounds of supplies and adventure gear. And filling the trailer’s massive 78-gallon freshwater tank would quickly take up a lot of that capacity. That much water weighs 650 pounds.

The Venture RV Sonic X has all the creature comforts you could ask for, including heat and AC. The optional rear adventure gear storage carrier is also a nice touch, as is the optional hidden rifle storage compartment.

Whether you need a base camp for your next kayaking, skiing, or hunting trip, the Venture RV Sonic X is worth considering.