Yesterday was National Hammock Day, so to celebrate, we headed into the Colorado foothills to test two camping hammocks.

Before the hammock smack-down, we ripped a quick mountain bike lap at Buffalo Creek and wrapped up at dusk. Properly tuckered out, we built up a campfire, made some steaks, drank a couple beers, and started stringing hammocks.

We’d never seen either out of the package and tried to avoid the directions.

Lawson Blue Ridge Camping Hammock: Upon pulling the hammock out of the stuff sack, it was immediately apparent what needed to happen to string this neat looking gear in a tree.

It took a few minutes to figure out how to use the Tree Hugger straps, but once I realized you need to start with them attached to the hammock, not tree, it all came together quickly.

Amok Draumr: This funky-looking design made me nervous to set up in the dark, and we immediately resorted to looking at the instructions.

Pamphlet read, the Draumr materialized quite easily between two trees. It took a while to figure out the adjustment system that allows the user to transition between sitting and laying down (more on this later), but had it more or less dialed fairly fast.

Lawson Blue Ridge Hammock: “This thing is sweet!” was my first thought pulling it out of the green stuff sack. As we set it up, my opinion did not change.

The design is intuitive for setup — we barely looked at instructions — and the resulting structure just looks like a good spot to sleep, with a mostly flat floor and domed mosquito net.

Climbing in the first time, I found a comfortable position in seconds and noted pockets for gear and hang points.

Amok Draumr: There was a lot of laughter and joking as the “alien” looking Draumr took shape. “Weird,” “sketchy” and “slack line” were a couple other words used as I assembled and eventually balanced on the Draumr for the first time. 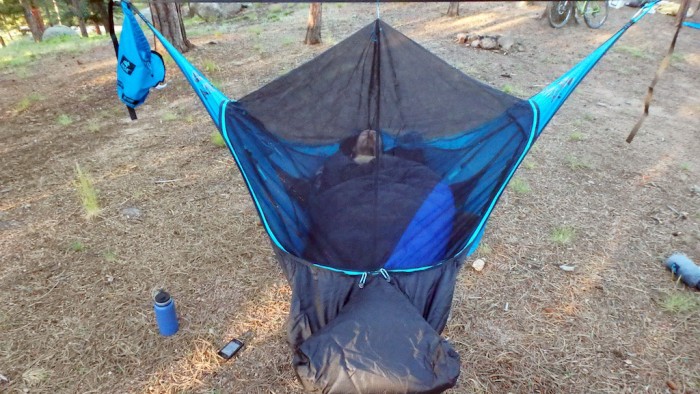 So getting in for the first time was a strange balancing act. I eventually got my feet and body situated inside the Draumr, and played with the adjustment straps to level out my body.

It was slow and not intuitive, and I was starting to regret my choice to spend the night in it as my buddy had earned the Blue Ridge Camping Hammock.

The true barometer of a hammock lies in your back, so we got to work and went to sleep.

Lawson Blue Ridge Hammock: My buddy crawled into his hammock while I still stood watching the fire, so I took a few photos and noted his quick halt of conversation; he’d fallen fast asleep.

“It was actually really nice, much better than my hammock,” he said. “It had more support, my back and neck didn’t hurt. The only thing is…if you flip over…you’re kinda ‘effed. But it’s nice, I’d definitely sleep in it again.”

In the morning, I had to go over and shake his hammock to get him to rise, the sun already kissing the tops of neighboring mountains.

Amok Draumr: My night was not as pleasant as my buddy’s. I crawled into the Draumar and took 15 minutes to get situated. I just couldn’t seem to get the thing completely flat, but was constantly fidgeting to find a position I could sleep in.

Finally, I got the contraption to suspend me and my pad in a mostly-flat configuration, and I drifted off to sleep.

But not for long! After a few minutes of sleep, I lost my balance a bit, and snapped awake. Then my back got a little sore from not being really flat.

I adjusted a few times, then had to pee … and nearly fell on my face getting out of the thing. Getting back in, I said “screw it,” removed my pad and sleeping bag, and fell asleep on the ground.

Around sunrise, the mosquitos started to bug me, so I crawled back into the Draumr. The netting kept the bugs at bay, and I was able to fall asleep, but still…

It’s kind of like sleeping in a lumpy taco. I just couldn’t get comfortable.

Testing Note: Amok calls for a “large sleeping pad,” meaning my mid-weight ThermaRest may have been under-gunned for the job. I doubt it would have made a lot of difference, but I do want to point this out.

Both products seem to be made from similar, high quality materials. For the price, Lawson wins this one hands down.

The Lawson wins, but neither setup is light and both require a sleeping pad and bag for comfortable overnight use. For backpacking, they are doable, but heavier than most 1-man tents and many other hammocks.

The Blue Ridge impressed us in ease of use, comfort and quality construction.

While the Amok Draumr is an interesting concept, it just didn’t work that well for sleeping. It can serve dual function as a chair/bed, but still doesn’t strike us as a practical camping solution, and at $400, it’s just too much to spend on a novelty.

The Blue Ridge Camping Hammock, on the other hand, is a fairly priced, excellent product that would work well camping most anywhere.

It can be pitched on the ground as a bivvy, in trees, and used with or without a rain fly. While it’s heavy for backpacking, this is a great shelter. Car campers or others who don’t mind the extra weight should be well served by this quality product.