Traeger grills are renowned for home use. A new model, the Ranger, gives tailgate chefs a portable pellet grill option.

But most Traeger grills are huge, arriving on a pallet or in a box that makes the UPS driver cuss. They require an afternoon for assembly, and you need a yard, a large deck, or a spacious garage to store them. 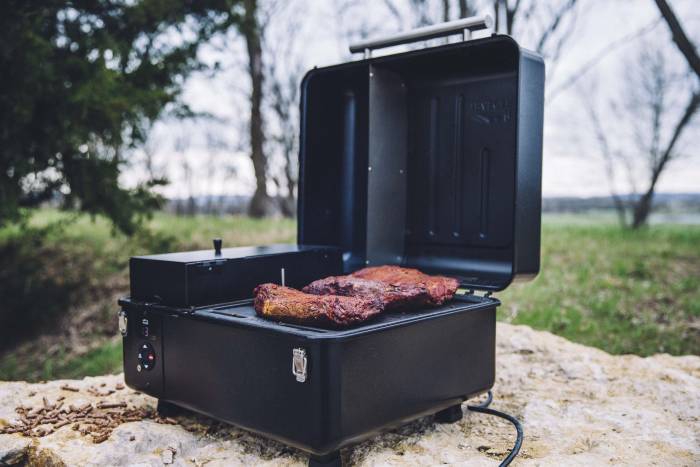 Traeger’s new Ranger delivers all the awesomeness of other Traeger grills in a package compact enough for a camping trip. Load it up for van life, bust it out for epic tailgating, then store it in a closet until you’re ready to fire up a feast on your deck or patio.

The grill sits on a table or the ground. And when you’re not using it, it clips shut so you can carry it with its oversized lid handle.

The 60-pound grill is larger than most portable grills, but it’s still compact enough to transport at 13 x 21 x 20 inches. The cooking surface can hold a rack of ribs, six burgers, or 10 hot dogs, and the hopper takes up to 8 pounds of wood pellets. 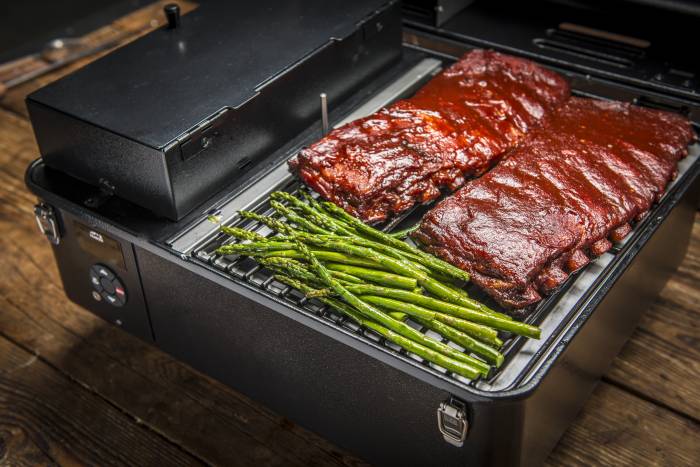 I slow cooked a Boston butt for four hours, and there were still pellets left in the hopper. Depending on how long and how hot you’re cooking, you might need to reload.

Once the Ranger is plugged in, a digital panel lets you control the grill. A center button cycles through temperature, timer, and probe temperature. It also turns the grill on and off. Up and down buttons increase or decrease temperature or time. A status display window shows temperature, remaining cooking time, and probe cooking temperature, and the meat probe plugs in next to the display panel. 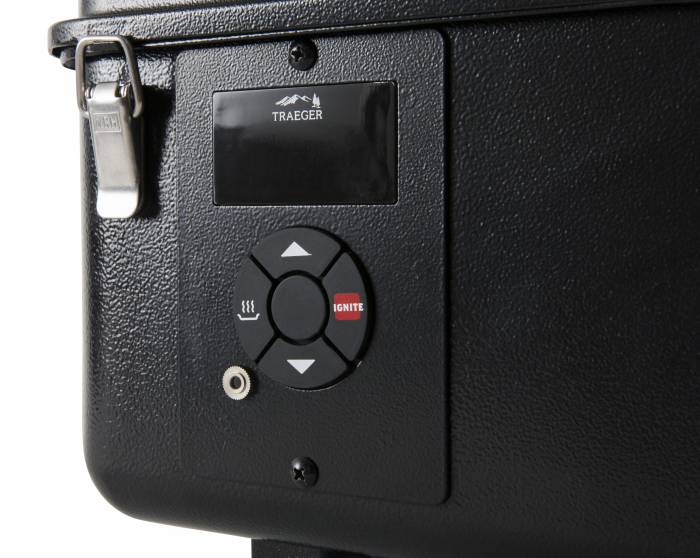 The buttons for ignition and keeping food warm are in the same control panel. And indicator lights next to the temperature readout confirm the timer is set, keep warm mode is activated, and the meat probe is plugged in.

That means that, when I stuck the meat thermometer into the Boston butt for pulled pork, it came out perfectly. Precise temperature control, arrows to increase and decrease temps by 5 degrees, let me experiment with smoking chicken for slicing and pulling.

And when dinner was ready but the rest of my crew was still out mountain biking, the pulled pork was still moist, tasty, and warm when they arrived. 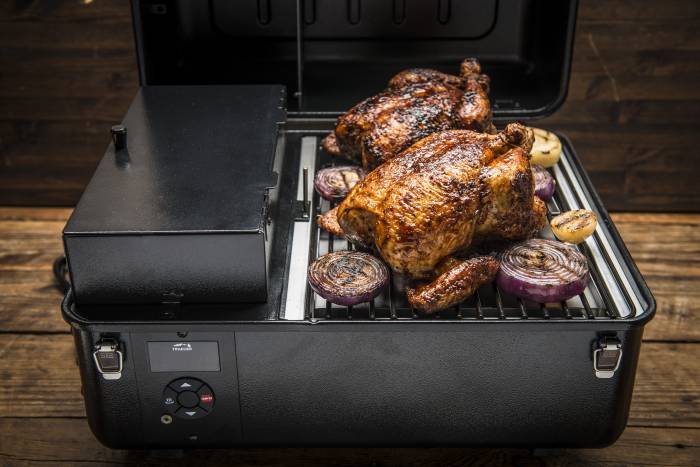 The Ranger has one bonus that other Traeger grills I’ve tested don’t have — an included cast iron grill. This made the Ranger both a dinner-making grill and a breakfast cooking machine. Eggs, pancakes, bacon, and smoky breakfast kale were all out of this world.

The one big drawback of the Ranger is that you do need a place to plug it in. Like other pellet grills, it uses electricity to turn its auger and heat its fireplug. And like others, this one runs on 120 current. 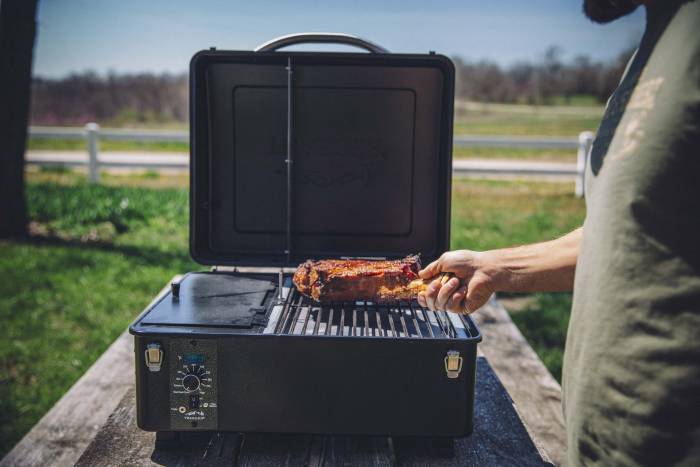 If you’re camping and have a Goal Zero Yeti Power Station or similar, you can power the Ranger without a wall socket. But it still requires 120 current, and thus an inverter if you run a 12-volt system.

We’re not certain how quickly it will deplete battery sources. It would be awesome to see Traeger design one of these to run on 12-volt in the future. But for now, you’ll need to invert or to plug into the grid.

Traeger for the Road

Because it’s a smaller, portable grill, cooking space is limited. And, with all Traegers, you’re restricted to using brand-specific pellets.

But it’s hard to call that a drawback, as they’re available in nearly a dozen subtly different and delicious flavors from maple to hickory. Amazon, Walmart, Home Depot, and my local hardware store all carry Traeger pellets, so it’s easy to stay stocked up.

The Ranger is a reasonable $399 compared to other Traegers, some of which are more than $1,000. And if you’re looking for something even more affordable, consider the Scout, for $299. It allows for temperature adjustment in 25-degree increments, has a smaller hopper, and is lighter.

Saving…
Free Gear Fridays: Cauldryn Battery-Heated Coffee Mug
A Family of 8 Is About to Complete the Appalachian Trail
×