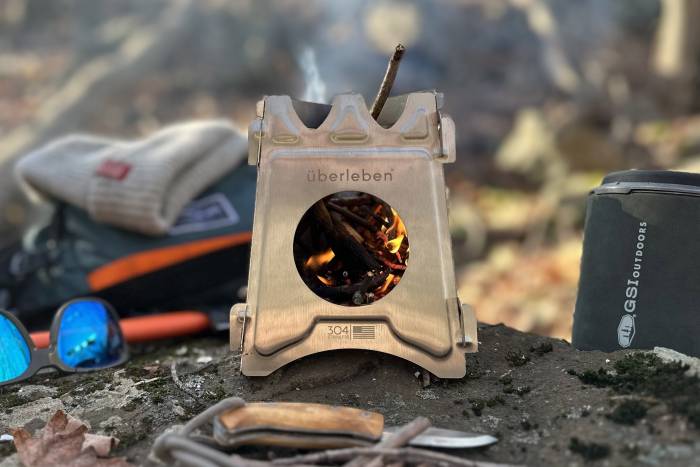 Überleben’s Stöker Flatpack Stove is a wood-fire camping stove that breaks down to the size of an envelope. It allows for rustic cooking in a modern design that won’t break down, wear out, or run out of fuel.

Growing up in the woods of New England, I’ve always carried a canister stove with me in the colder months — for both food prep and warmth.

At the end of the day, as delicious as they are, I don’t want to eat another PROBAR. I want to reward myself with something hot and delicious. Something that eases me into the half-assed quality of rest that comes with sleeping on the ground.

I started with an MSR PocketRocket when I was a kid. Then I graduated to the Dragonfly. And finally, for the last 20 years, I have been using the Original JetBoil stove. As much as I love all of these backpacking stoves, there are times — especially in the dead of winter — when I don’t want to deal with fuel and regulators or the chance of something not firing up when I need it.

Enter the Überleben Stöker Flatpack Stove. It’s 4 panels of stainless stamped steel (or titanium) that store flat until you assemble them into a tight little box fueled by leaves, twigs, tinder, and a little bit of coaxing from your breath.

In short: The Überleben Stöker Flatpack Stove ($48 stainless, $68 titanium) is the size of a sandwich and less than half-an-inch thick. It can warm up both you and your food and relies solely on the natural fuel strewn across the forest floor. And it can’t break down on you because there’s nothing mechanical about it.

This little stove is a powerhouse backcountry companion. It’s reliable, efficient, and green. Open fire isn’t always a viable option for cooking, but when it is, this stove really shines

The Stöker showed up in a flat hang package that you would expect a stove maintenance kit to come in. It was small enough that I could easily slide the stove into my pack without creating any bulk.

The stove is incredibly easy to set up, use, and break down. It didn’t include any directions. But it was fairly intuitive how everything went together just based on the design of the plates. Each piece locks into the other. And the direction of the notches is a clear indication of how they mate up.

The steel plates are .025 inches thick — or 24 gauge. They have been cut and stamped for ease of use, durability, and rigidity, making the Stöker pretty stout but not bulky.

I did a dry run at the house to see if there were any tricks to getting it together. The only thing I can point out is that you should put the front plate on last, as it’s the only plate that doesn’t notch into the base plate.

The first time I used the Stöker, it was bitter cold. But with only a little bit of snow on the ground, I was able to pick up sticks and tinder along the way. I found a great spot off the trail where I set the stove up on a large, flat rock and got a good fire rolling inside of it within two minutes.

Because of the cutouts in the plates, the Stöker burns efficiently, allowing air to flow in and out in every direction, even up from the bottom. But this efficiency requires the fire to be fed quite a bit in the beginning.

That isn’t a bad thing; it’s just something you should keep in mind. I started the fire with small sticks and leaves. But once it was at a place where I knew it would keep burning, I added a couple of larger sticks, and the fire was able to maintain itself.

There’s no reliable way to benchmark how quickly a stove like this will boil water. But I had 16 ounces boiled in about a minute in my GSI Halulite Minimalist. This rivals any canister stove I have ever used.

But again, it’s all determined by the fire you have going. You don’t want flames leaping up and surrounding your cup or pot. Instead, you should have a consistent fire with a good base of coals running when you put your cup or pot in place.

The stove is stable on most surfaces. Burning embers can drop down through the Stöker’s aerated bottom plate, so you’re going to want to set the stove up on stone, sand, or dirt — something that won’t burn. You could set it up on the snow, but the snow will melt and could block airflow coming through the bottom.

Stainless steel doesn’t hold heat unless it’s being heated, so this stove actually cools down rather quickly. In my experience, it took less than 5 minutes from the point where the fire went out to when the Stöker was cool enough to be handled for breakdown and storage.

Is a Wood Backpacking Stove Right for Me?

A stove like the Stöker will be less cumbersome than a liquid gas backpacking stove but more cumbersome than a canister stove. That’s to say that liquid stoves are fiddly and require management, although they are predictable. Cannister stoves are super simple to use. A stove like the Stöker requires you to build a fire, which will vary in difficulty depending on many factors. So you need to ask yourself: How involved do I want to get in preparing a meal?

For that purpose, the Überleben Stöker Flatpack Stove is an ideal backpacking tool.

I also enjoy a good meal at the end of the day. Of course, any type of backpacking stove can accomplish that, but there’s something about making a fire and taking the time to prep a solid meal after an arduous day that really appeals to me. It’s rustic, it’s old-school, and it’s soothing.

Legality can be a bit of a grey area when it comes to the Stöker. The stove is essentially an open fire contained within four walls and a base plate. That makes this stove impossible (or at least illegal) to use any time, anywhere there is a fire ban. This makes this stove a poor option for people looking to backpack in dry areas.

Complicating matters, State and National Parks have their own rules and regulations regarding open fires. And they are up to interpretation and dependent on weather conditions.

But, the guidelines for all of the Vermont State Parks state:

“In developed State Parks areas, fires are allowed only in fire rings, fireplaces, or charcoal grills at designated picnic and camping areas. All fires must be attended and under control at all times.”

I would argue that both of these statements allow for the Stöker to be used. A ranger might disagree.

Where you get your wood fuel for the Stöker can also be an issue. It’s illegal to transport firewood more than 10 miles in most states (50 miles in lenient states). That’s because moving wood long distances can introduce invasive pests or diseases to new areas. So, one has to be diligent to only source fuel from the immediate area you’re using the Stöker.

And even then, I have still been hassled by park rangers who swore on their mothers that I brought my firewood from out of state even though I bought it right there at the ranger station.

So, as with anything else in the outdoors, keep a low profile and use your best judgment. Check park websites for rules and changes in regulations, especially during the dry months or drought. And even if there’s no fire ban, but it feels too dry to burn safely, maybe leave the Stöker at home.

Like everything else, Amazon is rife with alternative stoves like the Überleben Stöker Flatpack Stove. And, on the surface, they look almost identical. In the last few years, brands like this have grown in number and popularity because they are readily available and cheaper. But does that mean they’re better?

I don’t know. I can’t honestly tell you without testing out each one of these other stoves.

What I can tell you is that Überleben, as a brand, is comprised of outdoor-oriented people who saw a need for this product. They’re a small company making sensible solutions that won’t break your bank. That’s a big win for me, as their basis for existing is all part of the culture of the outdoors.

In terms of build, it’s hard to beat the American 304 Stainless Steel the Stöker is made from. The United States still produces some of the best steel in the world. And in regards to stainless steel, 304 is the cream of the crop. Especially for an application like this, as it’s corrosion-resistant and stands up to high heat incredibly well.

Taking into account the design of the stove, it’s obvious that a lot of thought went into designing each plate. There’s nothing more that you need and nothing that can break down. The Stöker is simple and balanced, and there’s no reason you shouldn’t be able to use it for decades to come.

I can’t confidently say that about Amazon’s many alternatives.

Old habits die hard, and folks who have been using canister stoves for years will find it challenging to change over to a stove like the Stöker. Even as an optimist and the person who presented this stove to his editor, I was looking for ways that it wouldn’t be as good or as easy to use as my Jetboil. But I couldn’t.

In fact, I found the Stöker experience to be more in-depth and relatable to why I went out in the woods in the first place. A stove like this forces you to slow down and pay attention.

Do I think it’s the right choice for someone hanging off the face of a mountain on a portaledge? No, not even a little bit. But for the average person heading out on a casual adventure in the outdoors, this is a fantastic alternative to a canister stove. I personally think it could become your staple — your go-to stove, especially in areas with low fire danger.

Widening the spectrum of thought, the Stöker is a one-time purchase — $48 for the stainless version and $68 for the titanium variant. You don’t need to worry about buying and carrying additional fuel or fuel canisters or ever running out.

To quote Überleben: “If you can’t find fuel for this, you’re going to need more than a fire to save you.” 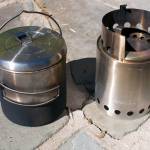