DMOS, famous for its backcountry, jump-creating snow shovels, takes aim at the overland and camp market with the multifunctional Delta Shovel.

You may not think you’ll ever need an adventure shovel, but DMOS begs to differ. The Wyoming-based brand launches the Delta shovel today on Kickstarter for an early-backer price of $149.

DMOS designed this new shovel as a packable, vehicle-based tool for digging a campfire or cat-hole, fixing the road ahead, or unsticking a stuck automobile. As you might expect, it takes aim squarely at the camping, off-road, overland, and RV crowds. 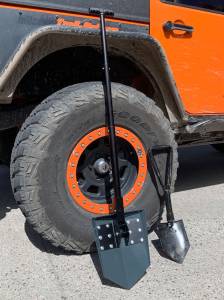 DMOS describes the Delta as “the next phase in the evolution of the shovel and a true year-round, multi-application solution.” The idea was to build a more versatile and refined version of the classic military entrenching tool. It’s also the brand’s first shovel specifically designed for use in the dirt.

DMOS began with a collapsible backcountry snow shovel to enable the creation of perfect backcountry jumps. It launches all of its adventure tools through Kickstarter, manufactures them in Oregon, and dreams them up from its headquarters in Wyoming. DMOS backs all its products with a lifetime warranty.

The Delta shovel handle attaches to a three-part, telescoping, locking, aluminum shaft. While it packs down relatively small — 11 x 24 x 3 inches — it extends to a considerable length of 51 inches. Still, it isn’t exactly backpacker light. DMOS offers it in both 12-gauge cold-rolled steel and 6061 aluminum, weighing 6 pounds and 3.5 pounds, respectively.

A foldable, three-position head adds utility as a shovel, hoe, and entrenching tool.

DMOS also offers a few transport options for the Delta. The most interesting is a dedicated vehicle mount. This mount is “for rear spare tires and roof racks.” The brand claims it’s “rattle-free,” lockable, and designed for a quick deploy. The mount is made of the same aluminum as the shovel, weighs in at 4 pounds, and fits roof bars up to 2 inches in diameter with included mounting hardware. You will want to be sure to put a padlock on this mount, as people will try to steal this shovel off your vehicle.

If you’d rather throw the Delta in the trunk, under the seat, or in your vehicle’s drawer system, DMOS makes a heavy-duty 1,000-denier nylon carrying/storage bag. It’s also American-made, MOLLE accessory/mounting-compatible, and weighs only 1 pound.

I’ve had an early prototype of the DMOS Delta shovel in our hands for a few months now, although I didn’t get to use it much. From my preliminary handling, it feels sturdy, has a solid blade design, and feels way more ergonomic than a basic entrenching tool.

For comparison, you can find a $25 military e-tool entrenching shovel on Amazon that packs down to 9.4 x 7.1 x 2.9 inches and weighs in at 2.2 pounds. But it uses lower-quality materials and extends to only 24 inches.

The Kickstarter campaign for the DMOS Delta shovel starts today. And if you want one of these shovels, you’re going to want to get in on this early. A limited number of early-bird backers can pick up the Delta for $149. That’s a bargain considering the Delta will retail for $199 when it hits shelves in time for Christmas.

Early-bird deals also soften the retail shock of the $379 shovel/mount combination or $319 shovel with carrying bag.

While we love the looks of this shovel, we’ll be the first to admit that spending $149 (and up) on a shovel is rough on the adventure budget. But with the lifetime warranty, this should be a buy once, cry once purchase. Check out the DMOS Delta Shovel here.

Up Next: You Can Rent Jimmy Chin’s Adventure Van This Summer