Build a small fire pit for heating or grilling in less time than it takes to cook a brat — and all while leaving no trace.

For most campers, even on dispersed BLM land, fire pits provide the bare necessity for a happy and safe outing. But what about campers on protected land where fires aren’t permitted? Igniting even a small, carefully tended blaze can violate Leave No Trace ethics.

Enter Fireside Outdoor. Founded in 2016 by Mark Wolf after an errant ember burned his friend’s new RV overnight, the brand had a (not so) simple mission: Make products to manage fire more safely and easily. After some close-but-not-quite products failed to take off, Wolf refocused his efforts to aid a specific organization — the Boy Scouts.

Fireside Outdoor aimed to provide the scouts a portable fire pit that was light, easy to set up and take down, and, most importantly, left no trace.

Today, the brand unveiled its lightest and most packable fire pit to date. Live on Kickstarter now, the Trailblazer fire pit complies with all federal fire regulations, provides an ample cook surface for four or more, and packs down to the size of a large thermos.

In short: I tested an early sample at GearJunkie’s Denver edit office to feed our hungry team of reporters and gear testers. The Trailblazer proved surprisingly capable of serving up enough heat and flame to cook a dozen brats, burgers, and sausages.

While not a true backcountry backpacking solution, for paddlers, car campers, or short overnight hikes, the Trailblazer burns quick and hot without scorching the land (or even melting the snow). 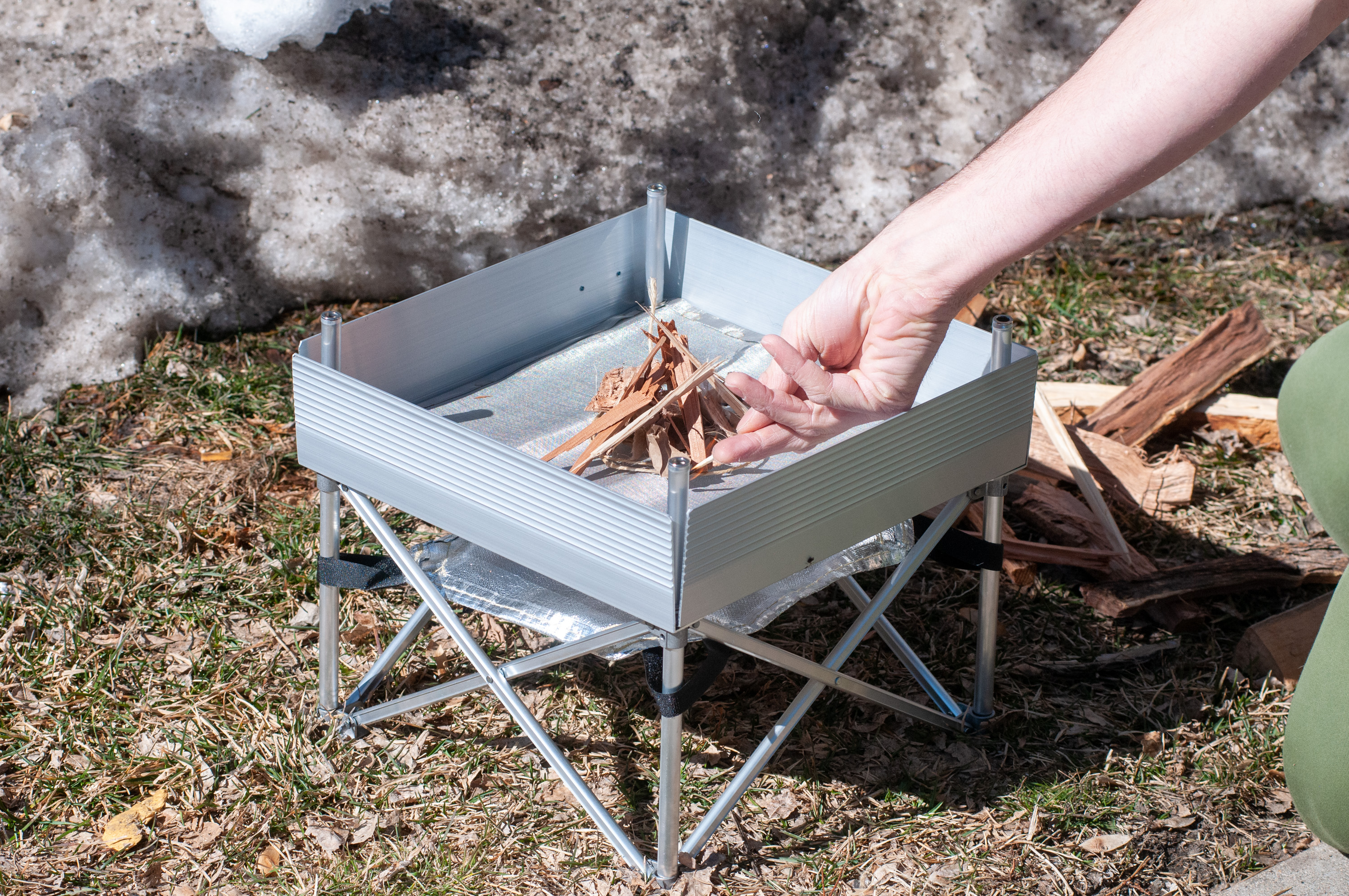 Live this week on Kickstarter, the Trailblazer takes all the design from Fireside Outdoor’s original Pop-Up Pit — what the brand called “the lightest, most portable Leave No Trace fire pit ever” — and shrinks it down even further.

But the kit still includes a collapsible aluminum stand, lightweight aluminum ember-guard sides, stainless steel mesh bottom, and aluminum-coated fiberglass heat shield. Plus, because the Trailblazer doubles as a grill, it comes with a foldaway grate.

Combined, the kit weighs in at 3.2 pounds and comes with a shoulder sling carry case. The brand claims the pit packs down to the “size of a Stanley Thermos.” In reality, it packs down to about 14 inches long by about 5.5 inches across — so, a big thermos. But it’s still a markedly small package for a portable grill and fire pit.

Open, the Trailblazer stands 11 inches high and offers a 12 x 12-inch fire area. And with the grill attached, you have an 11 x 11-inch cooking space. 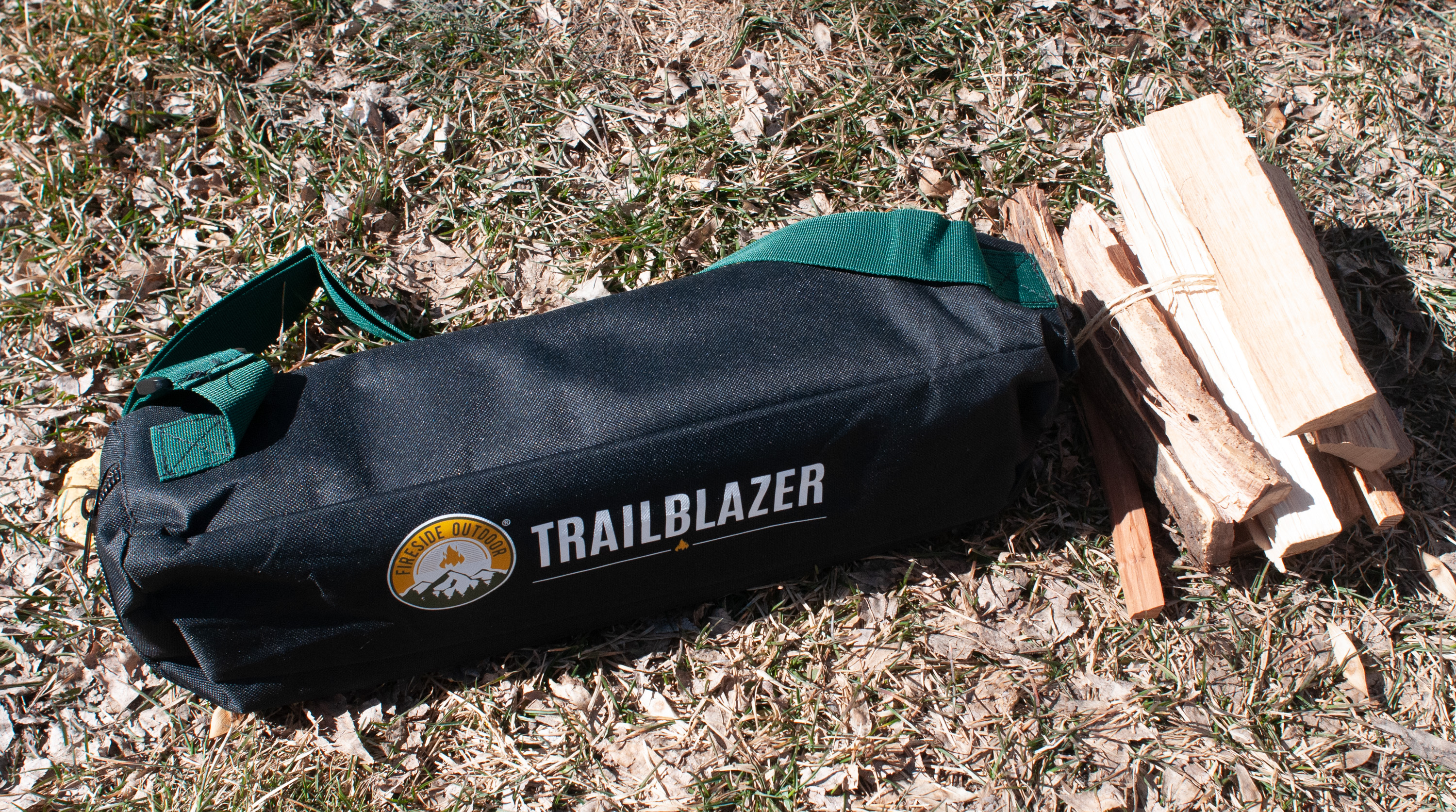 Last month, I tested the whole enchilada — setting up the fire pit, starting a small blaze, then slapping on the grill and cooking up some lunch.

Fireside Outdoor advertises a 90-second setup time. And honestly, that’s pretty accurate. The entire thing is pretty intuitive — the base unfolds like any pop-up canopy (only way more manageable). There are no bolts or screws to worry about, everything fits into place with grommets and poles.

The only exception here is the heat shield. It uses four Velcro straps, and it can be a little finicky to wrap it properly and in the correct spot. But once you get it, you’ve got it — and it’s pretty tough to set up incorrectly.

After sliding on the ember guards and mesh bottom, we piled on some kindling and small logs. According to the brand, the mesh can hold up to 30 pounds. Honestly, you’d be hard-pressed to fit that much wood onto the 12 x 12-inch mesh. 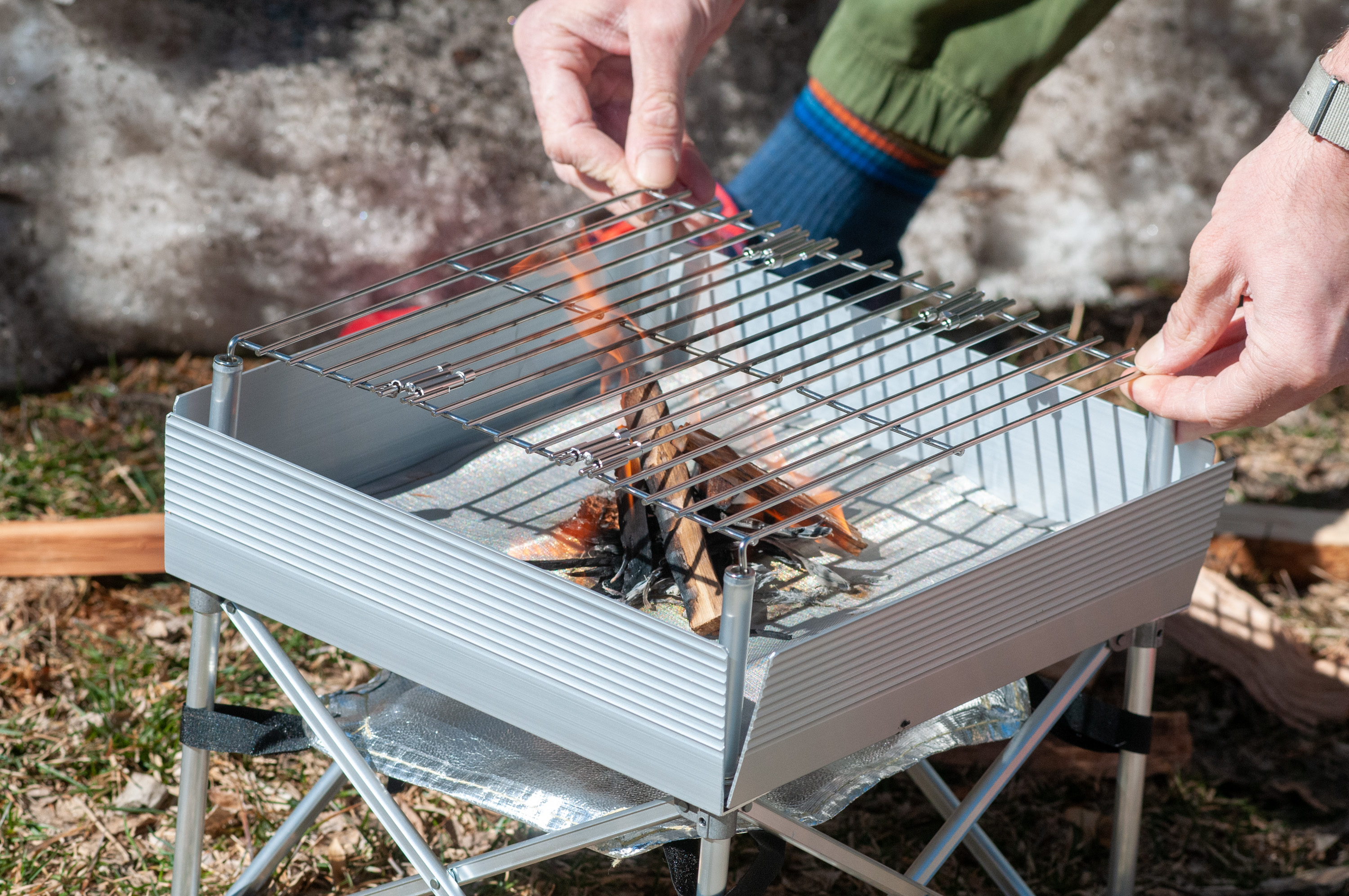 Lighting the fire was quick and easy thanks to the added airflow under the fuel. With the fire being raised and on a breathable surface, I also noticed less smoke and quicker burn times. (Note: I would not call this “smokeless.”) As a fire pit alone, the Trailblazer is definitely a no-hassle option, even for those unaccustomed to starting campfires.

Once the fire had a good head of steam, I tossed on some charcoal. This isn’t necessary for the grill, but I didn’t have all day and I was pretty damn hungry. The fire maintained itself with very little babysitting.

Next, I slapped on the grill (just match up the corners and slide into the top of the poles). I fit two burger patties, four sausages, and four brats on the grill — plenty for the four of us at the Denver office that day.

The took about 15 minutes to get high enough to cook. After that, the meat (and Beyond meat) cooked just like it would on any small grill. 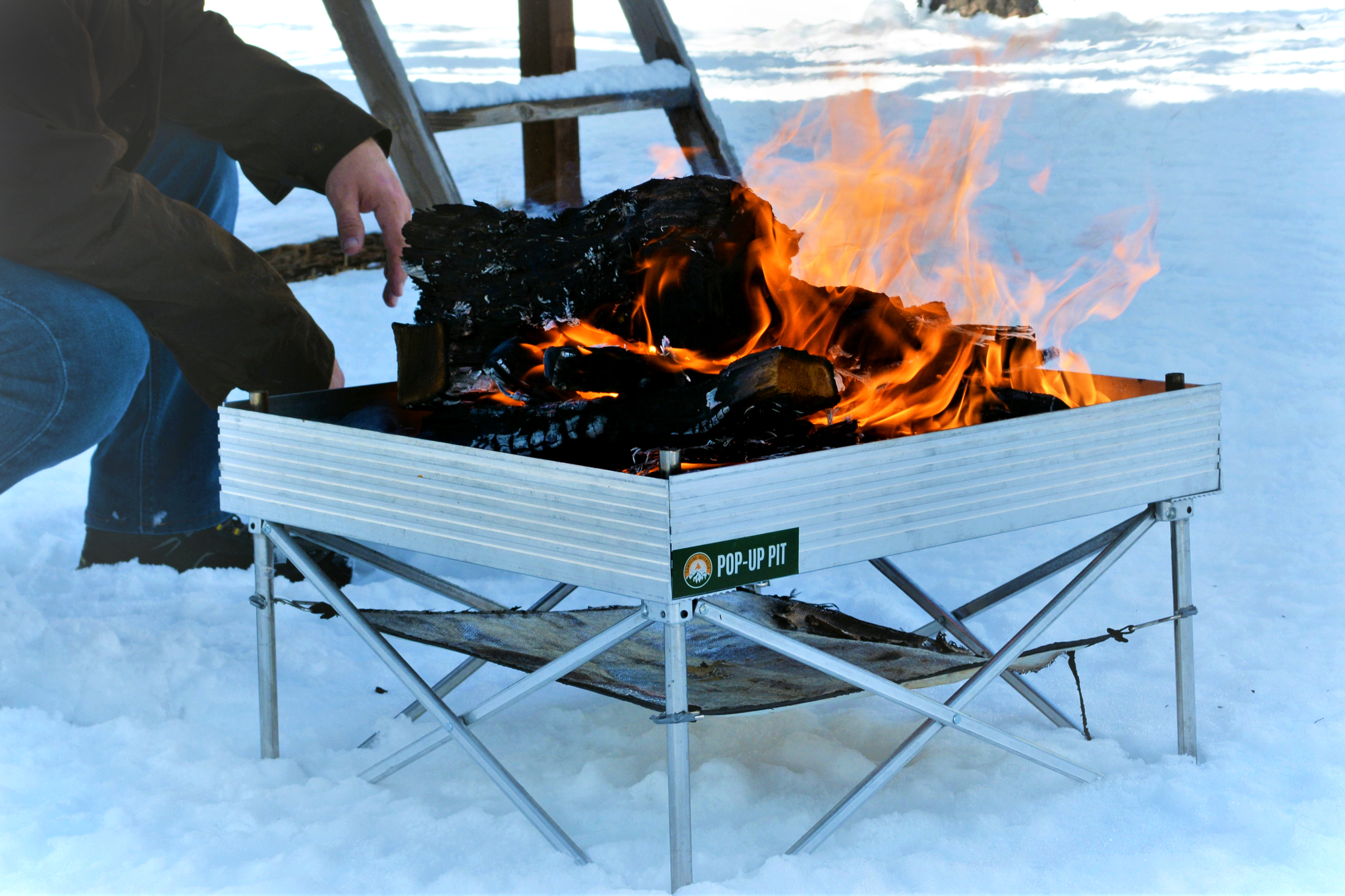 You might think the Trailblazer is too small for car camping and too big for backpacking — so where does it fit? As noted above, founder Mark Wolf designed the first Pop-Up Fire Pit for the Boy Scouts. Its suitability for Leave No Trace camping and adherence to federal regulations make it a fit for dispersed camping and light hikes.

But Fireside actually found a fervent following among the paddling community. Because of its packability, it’s suitable for river trips. More importantly, its raised design and heat shield allow campers to safely make a fire on an otherwise wet or sandy surface.

Plus, the mesh is “woven down to the nanometer” and contains 99% of ash created in the cooking process. Of course, strict adherents of Leave No Trace principles will still have to properly dispose of the spent fuel.

Overall, this is a great little grill. It is super portable and extremely easy to use. Plus, it’s $99, so it’s cheaper than a lot of outdoor gear. Other options, like the Solo Stove or BioLite Fire Pit, have their own merits. But neither is as light, portable, or simple to use.

The Trailblazer Fire Pit is available now for purchase through Kickstarter. You can snag one now for as low as $69. Once that’s over, find the Trailblazer on Fireside Outdoor’s site for $99.

Up Next: REI Outlet Sale: Save 40% on Big Agnes Copper Spur Tents