Home » Camping » Hammocks » Tents vs. Hammocks: How a Traditional Camper Took to Sleeping in Trees

Hammock brand Kammok tried to sell me — a lifelong tent-user — on hanging versus traditional camping. So I went along with the brand for overnights in Texas heat and cool Colorado mountains to see how hammock camping stacks up.

I have never been interested in hammock camping; It’s never seemed that comfortable. What about bugs, weather — and how do you move around? As a climbing guide certified by the American Mountain Guides Association, I’ve camped more times than I can count, in just about every condition. An ultralight one-person tent comes near the 1-pound mark, so I haven’t seen the need to hang in the breeze.

But Kammok, an Austin, Texas-based brand focused on all things hammock, is near my hometown. So this summer, we arranged a local camping trip to introduce me to sleeping slung, followed up by a kayak and camping outing near Gunnison, Colorado. I started as a nonbeliever, but now I see how hammock camping can add enjoyment to plenty of outdoor endeavors.

Here’s how I went from hammock curmudgeon to enthusiast — well, ally, at least.

5 Advantages of a Hammock (on paper)

Set up and break down camp faster. There are no stakes, poles, or sleeping pads necessary — just a pair of tree straps and the hammock for mild, bugless conditions. 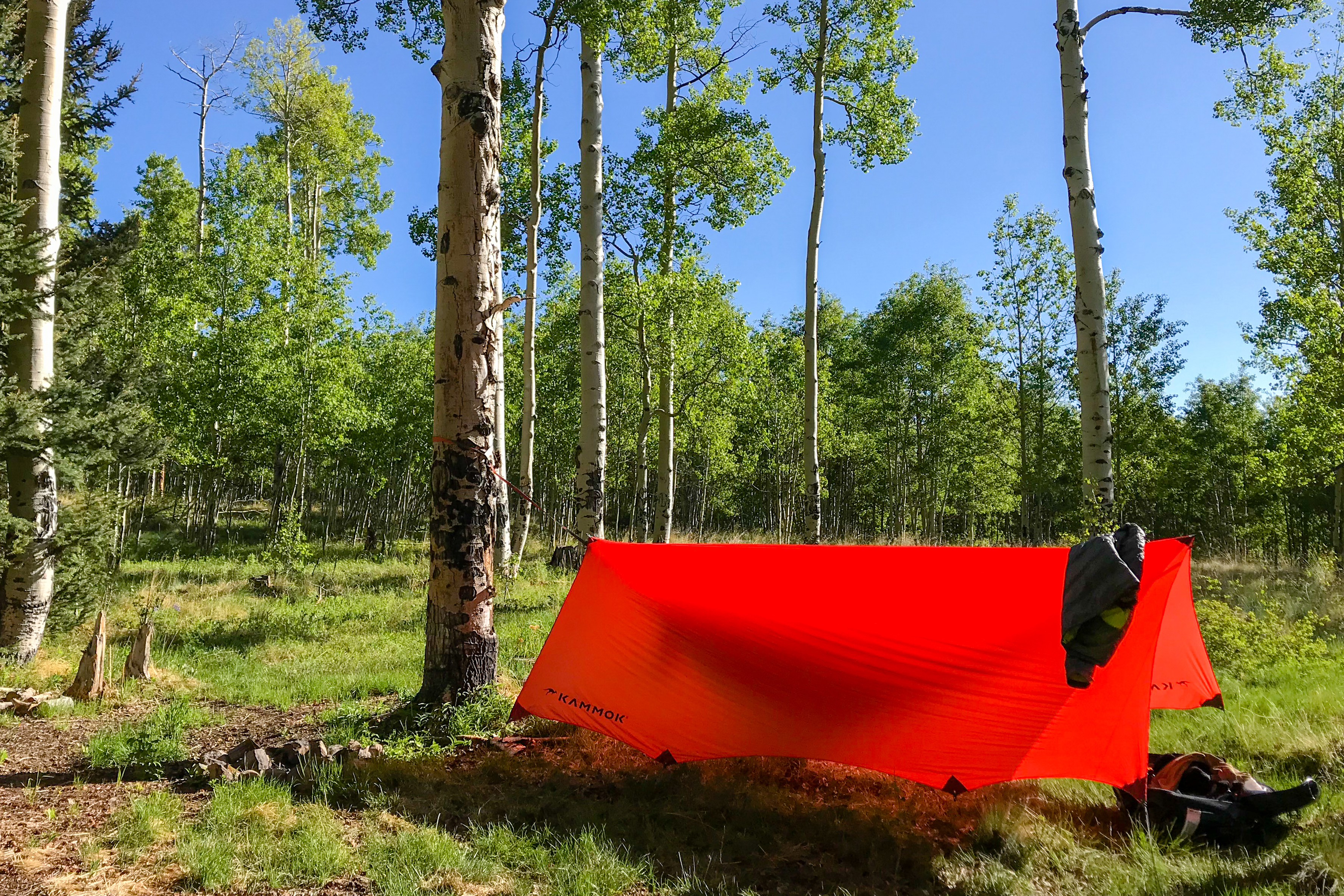 Travel lighter. Kammok claims a Roo Single ($69) with a pair of 10-foot Python straps ($29) weighs in at 1 pound, 2.2 ounces — together under $100. Expensive ultralight tents, like the Big Agnes Fly Creek HV1 Platinum, come in at 1 pound 7 ounces and run $500. Though the tent is slightly heavier, it includes bug and rain protection.

Sleep better. Kammok’s site touts a study that suggests the natural rocking motion of a hammock can elongate the non-REM portion of sleep.

Camp wherever you are. In addition to better sleep, hitting the proverbial hay is presumably less of a chore. No need to clear the ground of rocks or sticks, and mud is never an issue. You just need the appropriate trees. 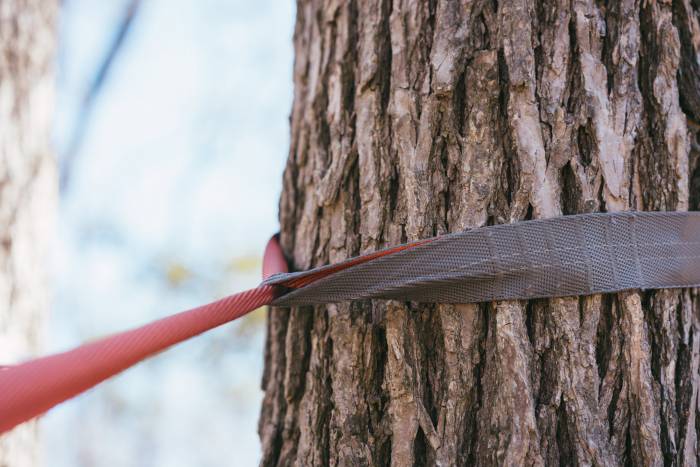 Leave no trace. Hammocks never leave smashed-down foliage, and the Python straps spread the load across 1.5 inches of webbing to leave trees unscathed.

Some of these claims seem plausible, but I required convincing for others. A local camping trip and subsequent Colorado trip gave me the opportunity to give each reason a stamp of approval — or the thumbs down.

Kammok decided on a car camping trip to Pedernales Falls State Park as my initial hammock camping experience. A typical Texas summer guaranteed high temperatures and humidity, a great test for what I considered the apparent venting advantage of hammocks.

Upon securing a campsite, two Kammok staffers let me venture off to set up a Roo Double ($99) with Dragonfly Insect Net ($79) by myself. I had previously set up a Kammok at my house, but I didn’t reference any resources. And even with the added net, common sense got the hammock up more quickly than any tent. 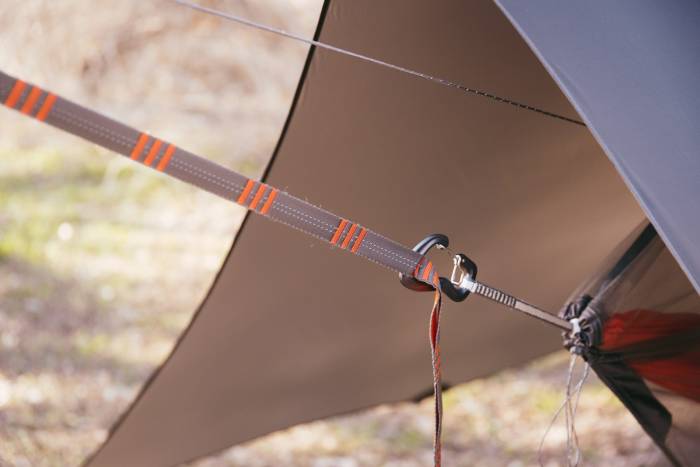 The setup is logical, intuitive, and doesn’t require knot tying. So yes, even in an uneducated, unassisted state, getting a hammock up and functional proved faster than a tent. That is, as long as live, suitable trees (12-15 feet apart) are available. And with some pro tips from the Kammok designer, setting up became even faster.

One Kammok team member warned me my first night in a hammock might be restless. But I had zero issues falling asleep after setting my preferred hanging tension (Kammok recommends starting with a 30-degree angle), which was easy with the 20 adjustment points on each Python strap and the hammock’s carabiners.

I am a side sleeper and have restless legs. The “hugging” effect of the hammock kept me still for the entire night — a rarity for me — without disrupting my slumber. I also slept on my back, as it was more comfortable than sleeping on my side. Lying on my stomach required much higher hammock tension and, in my opinion, wasn’t as comfortable as a tent floor.

Although I was in a “double” hammock, I think it would be difficult for two adults to sleep comfortably throughout the night due to transmitted movement and inability to avoid contact. I enjoyed having the extra space on the hammock as a solo camper, sprawling unimpeded. But for simple relaxation and lounging, the Roo Double was a comfortable and cozy affair for two adults.

Kammok rates the Roo Double and each Python strap to 500 pounds, the Dyneema hammock slings to 22 kN, and each Kanga Claw carabiner to 23 kN (13 kN for the Roo Single). All of this quelled any fears I harbored of a sudden midsleep collapse. For safety and comfort, Kammok also recommends a maximum hanging height of 18 inches.

And with overnight temperatures in the 80s with relatively high humidity, the airiness under the hammock proved excellent at keeping me comfortable. Even the slightest breeze provided a cooling effect, and the 70-denier LunarWeave ripstop nylon (DWR-treated) offered much more breathability than coated tent fabric.

Overall, hammock camping proved pleasant, easy, and environmentally friendly in the humid, high-temperature Texas testing grounds. But I still needed to try it out for more rugged environs.

Kammok and Oru Kayak put on a trip to Gunnison, Colorado, to test its techier offerings, and I was eager to escape to colder temperatures.

Our first night found us on a forested mountainside. Trees were in abundance, and the night promised a dip in the mercury.

I set up a Roo Single, this time with a wind- and precipitation-proof Kuhli Weather Shelter ($169) and 30-degree sleeping bag (my own). What was previously an advantage in the heat of Texas became a disadvantage in the mountain cold. The hammock’s openness wasn’t as protective against harsher climes.

Another cold-weather hammock camping issue was the added challenge of insulating against the cold air beneath. Theoretically, an insulating pad could work, but an underquilt, like the 30-degree down Kammok Firebelly Trail Quilt ($279), is a more elegant, comfortable, and efficient solution. It’s expensive, however.

The quilt places the insulating layer underneath the hammock, eliminating loss of loft due to crushing from your body weight. The overnight temperatures dropped into the lower 40s, but I managed to stay warm by engaging the full mummy mode of my sleeping bag and slept well.

The next day put us on the Gunnison River at Blue Mesa Reservoir. We paddled to a sandy beach that had a limited selection of trees. Here, I chose to sample the Sunda Tent Hammock ($399), a unique, albeit complex, hammock-tent combination.

Because of its size and componentry, it was the only shelter we had to stow on the exterior of the kayak. Others’ hammocks were compact enough to stow inside the Oru foldable kayaks.

The group congregated in a narrow grove of trees, everyone successfully and quickly finding workable anchors. Finding a suitable tent site in the shade on this beach would have proved difficult, as there wasn’t much flat ground near the trees.

I pitched the Sunda in the tent configuration in a separate area than most of the hammocks to secure a flat tent site. This exposed me to the early morning sun, but the Sunda proved breezy, so sleeping past dawn wasn’t an issue.

At 100 inches, the tent-hammock’s floor is much longer than a typical two-person tent. This leaves plenty of space above or below the sleeping bags for gear and pets within its spacious 34.7 square feet.

Although I didn’t get to try the Sunda as a hammock, a Kammok staffer demonstrated this mode. It was a bit complicated to set up but yielded a hammock with a built-in bug net and fly.

The Sunda left a visible footprint in the sand. But all the hammocks indeed left no trace: No telltale signs of a tent floor, only footprints, and trees were left unharmed.

I came into these Kammok-sponsored outings as an experienced outdoor adventurer that wasn’t impressed with or overly interested in hammock camping. I figured it would take a lot to sway me into believing the advantages could overcome the disadvantages. Or that the hammock camping movement was nothing other than a hipster-driven, backyard-oriented flavor of the month. No offense.

At the outset, Kammok claimed five hammock advantages over traditional tent camping. I tested each of the brand’s claims thoroughly during my outings with the company.

Travel lighter. This is possible in mild conditions. A Roo Single and a pair of Python 10-foot straps weight just over 1pound — compact and relatively inexpensive (under $100) compared to ultralight one-person tents ($500+).

But the hammock package swells in weight, size, and cost if a bug net and tarp are required. Adding Kammok’s accessories increased the claimed weight to 3 pounds, with a total price of $346, negating both weight and cost advantages. And that’s without the underquilt.

Sleep better. Sleep is so subjective. I did sleep better and more still in warmer conditions than I typically do in a tent. But this had nothing to do with the rocking motion, as the brand claimed. Rather, the “hugging” of the hammock subdued my restless legs.

I also believe that temperatures lower than the 40s (Fahrenheit) require an underquilt, which adds expense and weight. And should storms brew, a tarp — Kammok’s or third-party — is a must to ensure sound sleep. Finally, stomach sleepers may have issues with creating enough tension to avoid back hyperextension.

Camp wherever you are. This is true if there are trees. And that can be a big “if.” Desert dwellers need not apply.

Leave no trace. I completely agree. As noted above, all the hammock options left fewer visible signs of human presence than a tent does.

One thing Kammok failed to list as a primary advantage of hammock camping is the added fun factor. The novelty and unique feel of sleeping in a hammock added an irrepressible grin to my outings. And having one up for relaxing during the daytime, in favorable conditions, is worlds nicer and more social than crawling into a tent.

For this tester, the bottom line is that hammock camping can add comfort and fun to both front-country and backcountry adventures, as long as (1) the conditions remain mild and (2) appropriate trees are available.

And for me, hammocks will also get a favorable nod when the temperatures are high, as they allow more breathability than a tent. Perhaps most importantly, as a dad, I will bring a hammock (or three) along on every family car camping trip. No matter where we sleep, having hammocks hanging around invites relaxing — a primary goal of any getaway.