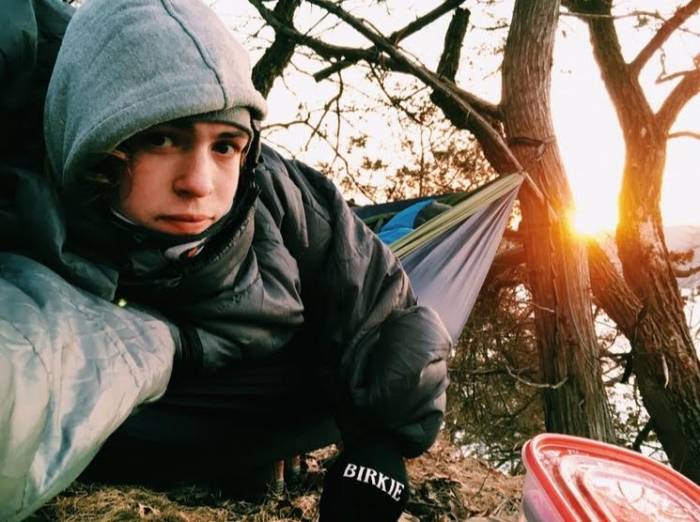 Henry Adams, age 17, has slept in a hammock outside his home in Minnesota every night for almost two years. 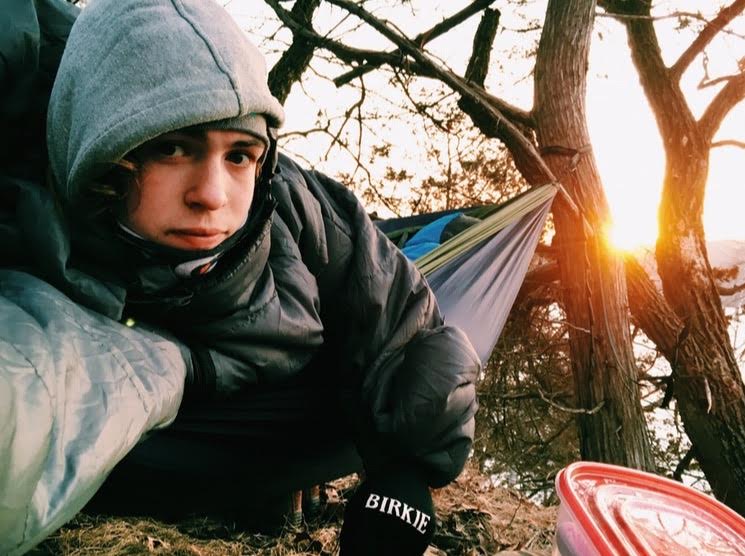 It’s deep winter in Minnesota. But in the Twin Cities suburb of Edina an old synthetic sleeping bag serves as the main warmth for a high-school senior sleeping outside.

Henry Adams is on a mission to sleep outside (at his parent’s house) every night, no matter the weather. He makes do with gear he has, including a generic sleeping bag with a hole cut in the bottom.

Temps get down to below-zero, but he never skips a night. Adams pulls the modified sleeping bag over the hammock then settles in for sleep.

“For warmth, I wrap a blanket around my face,” he said. “For comfort, I put a pillow behind my head and one between my legs.”

Through summer storms and sub-freezing conditions, Adams prepares himself for sleep night after night. He chooses to live the hammock life because, quite simply, “I find it fun,” he said.

It’s not been all easy sleeping. Adams recalls one night when a storm swept through. He only had a small tarp from a local hardware store.

“Water splashed me the entire night, and the tarp whipped back and forth in the wind.”

At 1 a.m., one of the tarp ropes broke. He managed to secure the rope to his hammock and somehow fall back asleep.

He could have called it quits at any point of the night and gone inside. But he said the “challenge and [occasional] discomfort” make it worth the effort.

For the winter months, he uses a Fox double hammock with a cheap synthetic bag encapsulating it. Between the space of the sleeping bag and the hammock (on the outside), he places a down comforter and fuzzy fleece blanket.

Within the hammock, he has another down comforter and one more fleece blanket. Past that he has a Marmot Trestles 30-degree synthetic bag, followed by a 5-degree The North Face down sleeping bag. Talk about bundled up!

With this layered setup, Adams is able to sleep comfortably during the below-zero Minnesota winter nights.

Summer: The Most Challenging Hammock Season

Adams said summer is the most uncomfortable season, but winter is the hardest, due to the complex outfitting. If rightly equipped, he said, it’s much harder to sleep during 85-degree summer nights compared to minus-20 winter nights.

During the summer months, he sleeps in a Yukon Outfitter hammock that has a bug net. When it gets rainy, he employs an ENO XL rain tarp.

Given the curvature of a full hammock, I imagined there might be back issues. He has yet to notice any changes to his posture or back.

I’m not the first to voice this concern. Adams said he hears it a lot.

Looking ahead, Adams is leaving his Minnesota home for college in Montana this coming fall. He intends to camp in a hammock a large portion of his time there, too. For now and the foreseeable future, the streak continues.