Versatile, comfortable, and fun — the Roofnest Sandpiper ticked the right boxes for a rooftop tent. And, to my surprise, it also proved the perfect sanctuary from a curious bear.

I was never more happy to be in a rooftop tent than when a bear crawled in beneath it while I was sleeping. I was solo camping in Colorado’s Arapaho and Roosevelt National Forest, about 10 miles south of the Wyoming border. My favorite camp spot resides there, and while it’s not a secret, you need a keen eye, plenty of ground clearance, and some good karma to reach it. 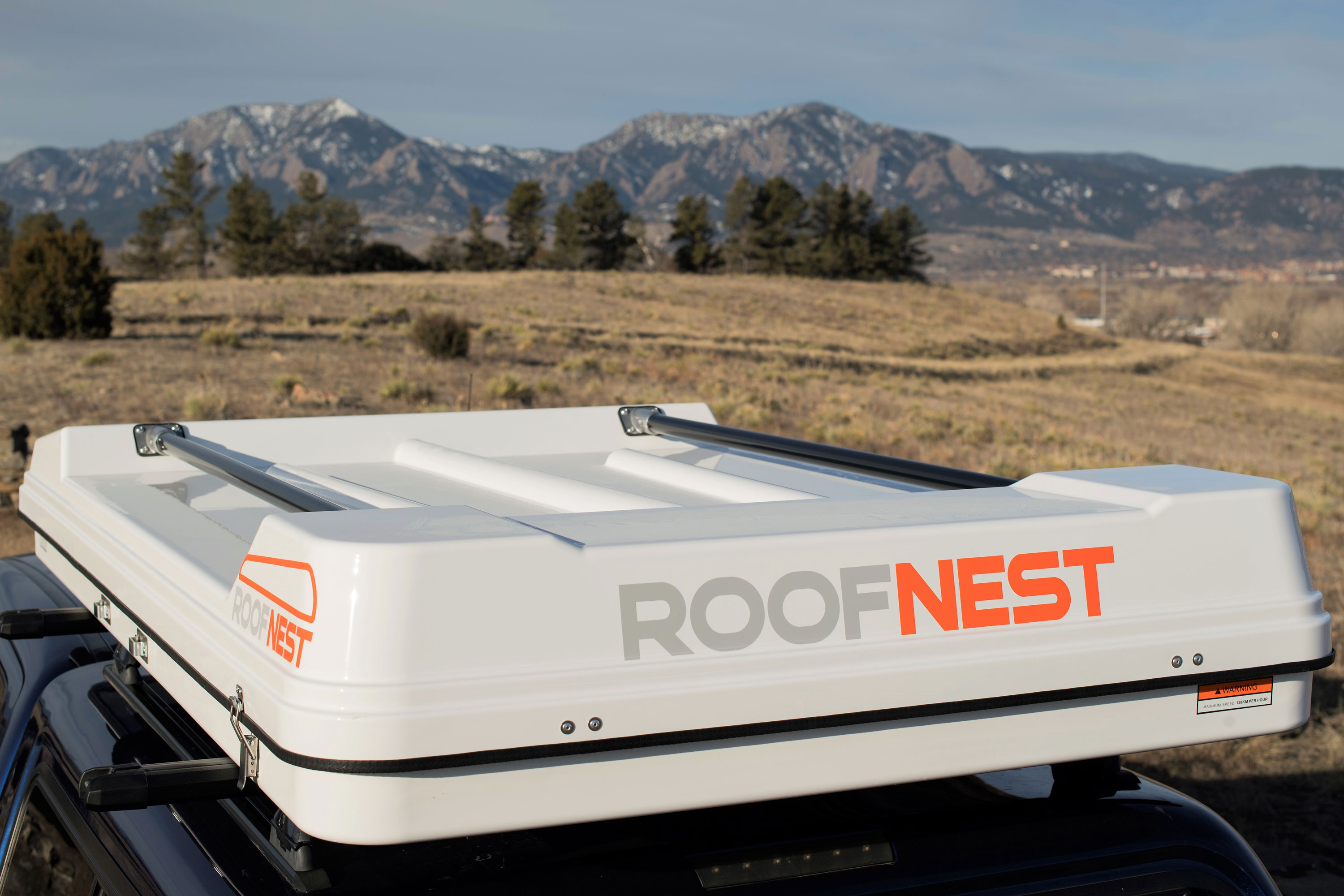 So I knew it would prove the perfect place to try out the latest vehicle-mounted tent from Roofnest, the Sandpiper. This 145-pound rooftop tent is one of the brand’s lighter offerings. But it’s also one of the strongest, thanks to a new fiberglass-ABS shell that boasts a set of roof bars capable of hauling up to 100 pounds of gear.

Launched this year, the Sandpiper aims to be Roofnest’s most versatile offering for gear-happy adventurers. I bolted it onto some Thule truck bed racks this spring and have been tooling it up, down, and through the mountains of Colorado. And when a furry, 300-pound “guest” snuggled up behind my cab, I really came to appreciate the elevated camp experience.

In short: Roofnest stakes its name on rooftop tents that are simple to install, set up, and take down. And compared to much of the competition out there, the Boulder-based brand nails it. The Sandpiper is light enough that two people can install it in minutes and it won’t adversely impact gas mileage. And while it commands a premium price at $2,795, its ease of use and built-in comfort — blackout canvas walls, memory foam mattress, and ample headroom — make it an investment buyers are likely to be happy with.

Bear Encounter in a Rooftop Tent

I awoke to the sound of my leaf springs creaking and the mattress beneath me swaying. And a single, unmistakable grunt.

It was pitch black, but I knew the sun must be rising since I felt fully rested. I checked my phone. With 1 percent battery, it showed 5:30 a.m., then promptly died.

Some jostling sounds beneath me, in the truck bed, snapped me back to attention — and I knew instantly.

There’s a bear in the truck. 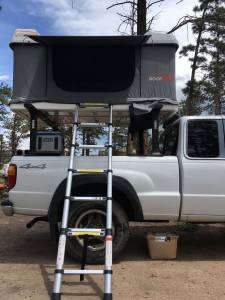 To my own surprise, there was no fear. Colorado doesn’t have any grizzlies, so it must be a black bear. And while they’re not insignificant, they generally scare easily and avoid human contact. I felt around the canvas wall for the zipper and instinctively shouted, “Are you really in my truck right now?!”

On cue, I heard scrambling claws and felt the sudden bounce of a large animal lumbering out of the bed. I caught the zipper pull, opened the mesh door, then unzipped the large canvas outer door keeping the daylight at bay. I peeked out, my head some 8 feet off the ground.

The dark-brown bear, probably a juvenile by its size, trotted away from my truck. Once it reached the edge of my camp, about 20 or so feet away, it turned around and considered me. I allowed myself an extra moment to take it in — it was a beautiful morning, quiet, and I really appreciated this visitor. But I couldn’t let a bear feel too comfortable in my camp, so, finally, I yelled, “All right — get on! Go!”

With that, it politely dropped a gob of bear slobber near my fire pit and took off down a wooded hill, out of sight. I yawned, zipped the doors shut, and laid back down, happily out of reach.

Unlike Tepui and CVT, which make burly, foldout rooftop tents, Roofnest targets campers looking for ease of use and a lower-profile design. As a major plus, I was able to install the Sandpiper within minutes. I had one strong friend tall enough to help me get the 145-pound tent on top of my bed racks. A few brackets and bolts later, and the job was done! By comparison, my friend has a larger foldout tent that took hours to fully install.

The trade-off with Roofnest’s strut-powered, pop-up design is floor space. Whereas the foldout variety expands well beyond a vehicle’s own footprint, pop-up tents basically match the vehicle’s width. Which design is right for you really comes down to a matter of preference and need. 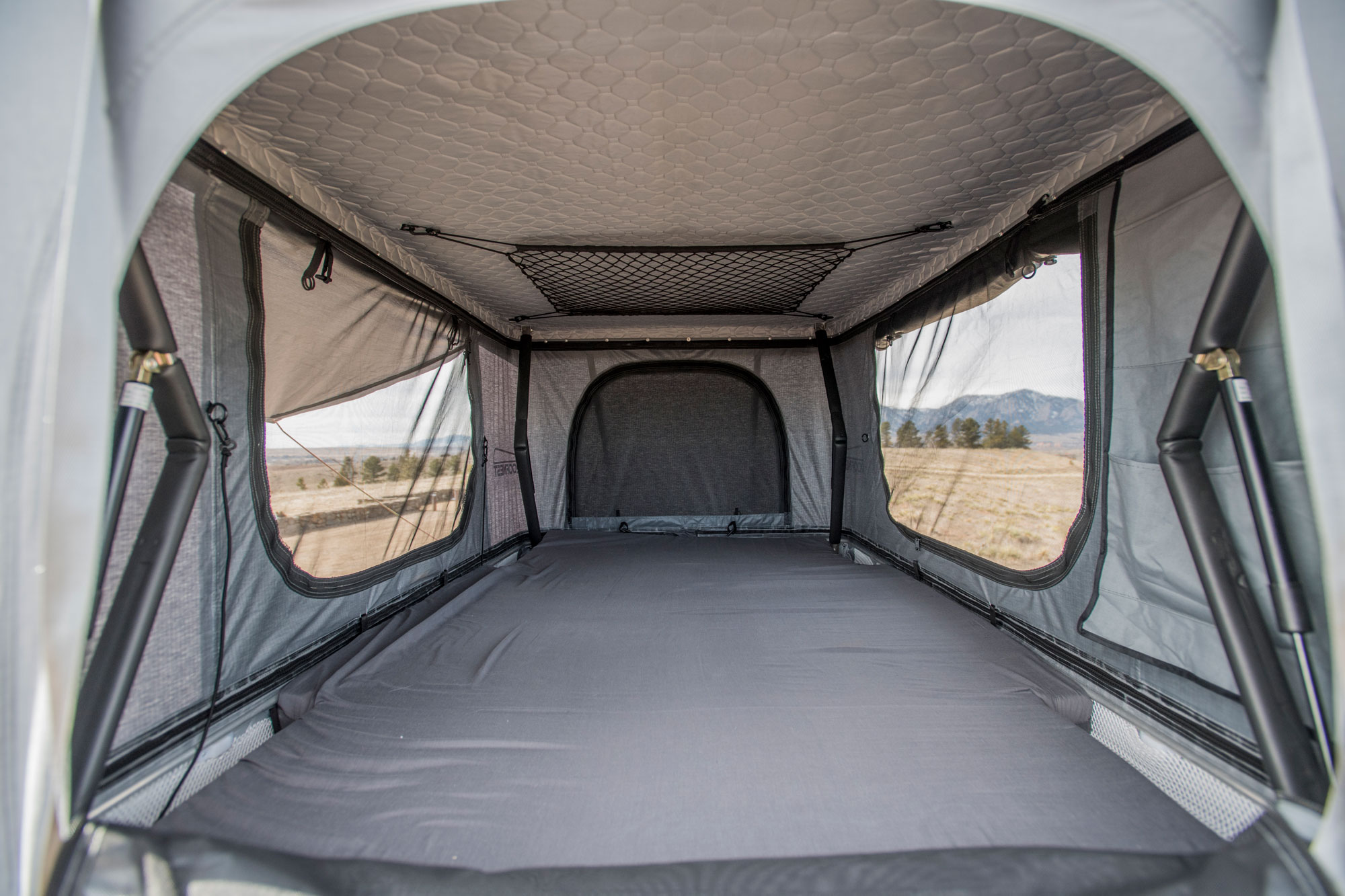 As a place to sleep or hang your feet and have dinner, a Roofnest has just the right amount of space. The Sandpiper sleeps two comfortably with a little elbow room left over. I’m 6’3″, and the Sandpiper provided enough length for me to lay out completely, with a few inches to spare at my head and feet.

The included 3-inch memory foam mattress was plenty comfortable for me. Though I’m not picky when it comes to bedding. But for me, the real selling points are the materials and the tent design. A heavy canvas outer keeps wind, weather, and pesky sunlight at bay. But large mesh doors on either side and two mesh windows on the front and back leave ample venting options. The walls also do a better job at muffling ambient noise than traditional poly tent walls.

I like to sleep in a “black box” configuration, with all the walls and windows closed. But the canvas walls covering the doors can be rolled up or pitched into an awning with included hardware. This was perfect to keep the inside of the tent cool during the day.

A few handy extras round out the Sandpiper package. The tent comes with a 4 x 4-foot ground mat to kick off shoes before getting inside. And two removable shoe sleeves can hang inside or outside the tent, a clever and very useful feature. There’s also cargo netting along the ceiling that I used to stowe headlamps and string some LED lights. Last but not least, all Roofnest tents ship with a removable, telescoping aluminum ladder.

Clearly, I enjoyed sleeping in the Sandpiper. It’s comfortable, quiet, and fun to use. But there are some downsides. As easy as it is to install and set up, it can be particularly frustrating to close for one person. The gas struts that make the tent a breeze to open also complicate the collapsing process.

Basically, you can only close one end at a time. And when you try to close the other end, the opposite end often pops back up. It takes some practice, but eventually you learn to pull down the front end, engage the latch, and then shut the back. You have to push, pull, and shimmy to situate it just right, but you’ll get the hang of it with some repetition. 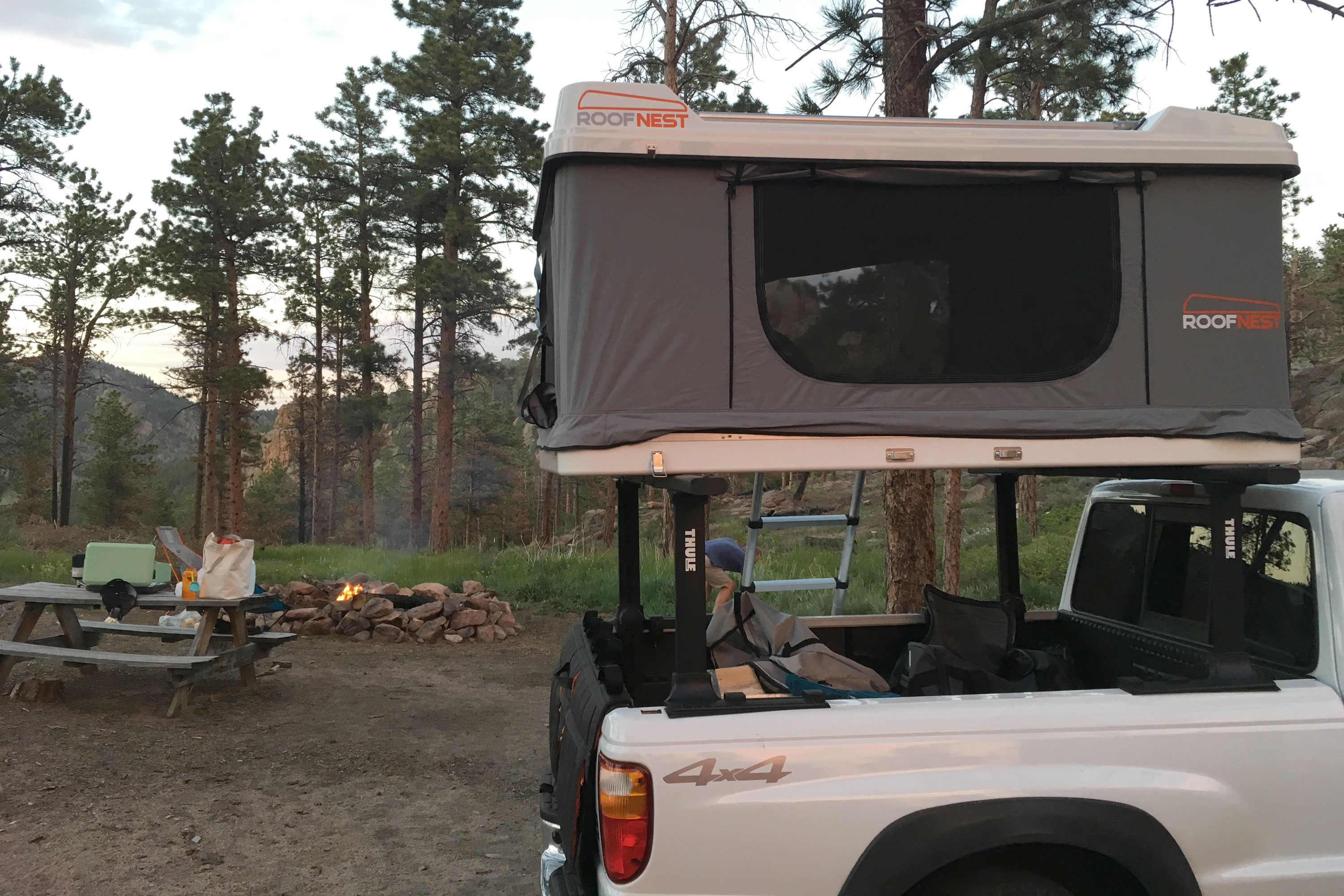 Also, Roofnest switched its closures from cam straps to locking metal clasps. The brand advertises this as more secure, which is true. But it also doesn’t leave you as much wiggle room as the cam straps do. In one instance, the tent closed down too low for the clasp to engage. I rearranged some things inside the tent, the clasp engaged, and the issue hasn’t repeated since.

Essentially, you’ll have to learn the nuances of this tent. From my perspective, the advantages outweigh any disadvantages I encountered. Of course, the big asterisk is price. The Sandpiper is a $2,800 tent. But for the money, you get a weatherproof, cozy tent for two that sets up in seconds. You can sleep anywhere you can park your vehicle and not worry about rocky or muddy terrain.

Anyone who camps several times a year, leans on their car for adventure travel, or wants to elevate their camp comfort (literally and figuratively), the Roofnest Sandpiper fits the bill. And who knows? It may prove the perfect perch for an unforgettable wildlife encounter.