Far from its iconic Bus and Westfalia brethren, the 2015 California campervan from Volkswagen appears to be a modernized vehicle with working-class roots. 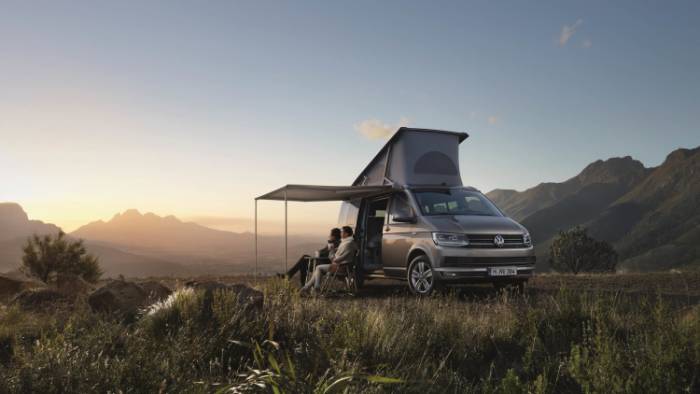 The California is built on the sixth-generation Transporter platform that was introduced just in April. This Transporter upgrade was modest at most, a mid-stream tweak to a successful and hard working vehicle.

A major snag in the North American market — it appears this version, once again, won’t be available for easy purchase, so North American customers will have to get creative to get hands on one.

Volkswagen has hinted that it may bring vans and trucks to the U.S. in 2016, but at this point it is pure speculation which vehicles may be available. Come on VW, quit teasing us!

The van comes with technology that would have old Bus owners drooling, including driver assistance, adaptive suspension, a 201 horsepower engine — and presumably a fully functional heater. 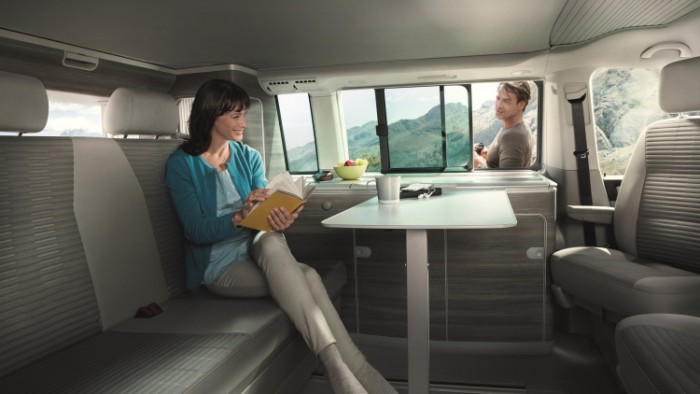 But with the California, customers suddenly have a fine looking campervan that will pull double duty running kids around town. 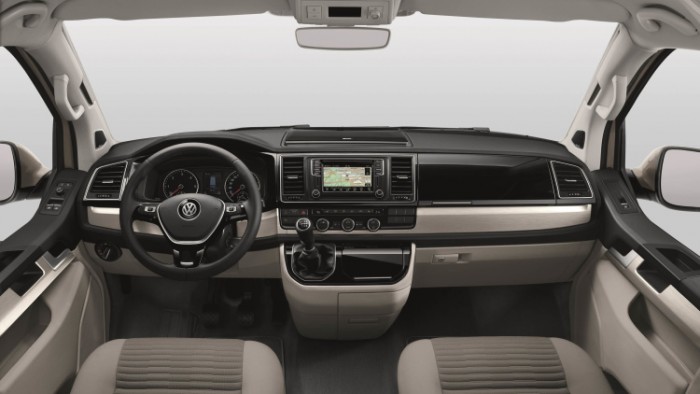 Inside the California is everything from seating for up to seven and beds for up to five to a literal kitchen sink (and stove). 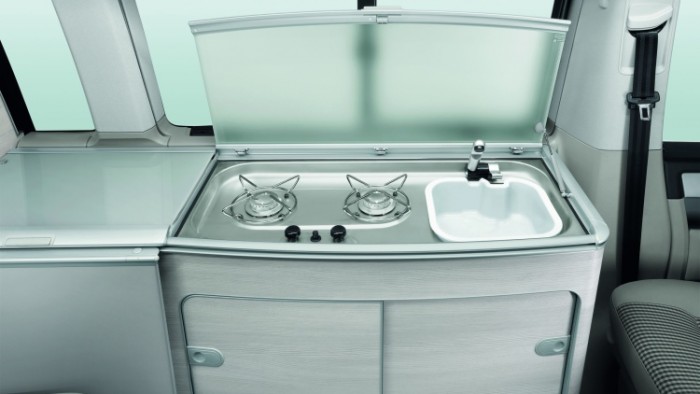 No, it’s not the spectacular re-release of the iconic Bus or even Westy, but for now we’ll have to get by with what looks to be a very utilitarian van for weekends at the crag or beach. 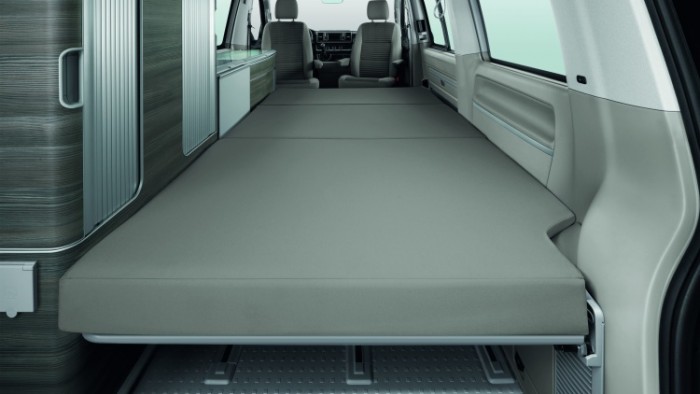 Available in two models (Beach and Ocean), the California (and other VW vans) have not been available in North America for some time, and it’s unclear if Volkswagen Commercial intends to enter the market with this or another rendition in 2016.

Volkswagen Commercial Vehicles is set to kick-start the summer holiday season with the official unveiling of the new California. Based on the recently revealed Transporter T6, the new California remains the only factory-built campervan on the market, and offers a host of improvements and new features for buyers who want the ultimate home from home.

The new California is the fourth model to bear the name, and builds on the strengths of its highly successful predecessors. The range incorporates all the key features introduced on the new Transporter T6, including new, more efficient engines that are up to 15 per cent more economical than the outgoing units. The new California also features a range of advanced technologies designed to make life safer and even more enjoyable for occupants. These include driver assistance systems, a completely refreshed infotainment system and the availability of adaptive suspension.

The launch engine range includes both diesel and petrol options, along with DSG and 4MOTION four-wheel-drive derivatives. Power outputs for UK models range from 102 PS for the entry-level 2.0-litre TDI engine (Beach models only) up to 204 PS for the 2.0-litre TSI petrol unit (Ocean models only).

Naturally, the new California retains the legendary practicality and storage ingenuity of its predecessor. Available in two forms; Beach and Ocean (which replaces the current SE model), the California can sleep four occupants courtesy of its acclaimed pop-up roof (electro-hydraulic on Ocean models) that neatly integrates a 1.2m x 2m double bed. Ocean models also feature a fully-equipped kitchen, complete with 42-litre refrigerator, twin-burner hob and stainless steel sink unit. Ocean models also gain a dimmable LED lighting system for the pop-up roof and tailgate and a clever multi-functional holder for the rear compartment that incorporates a cup, ashtray and towel holder all in one.

Driver and passenger safety is another are where the new California excels. Among the many advanced features introduced on the fourth-generation models are a Driver Alert System, Brake Assist and an Automatic Post-Collision Braking System. The former is fitted as standard on all models and can detect any deviation from normal steering patterns. If deviation is detected, the system uses visual and acoustic warnings to recommend that the driver takes a break. Brake Assist adds another layer of security by registering the speed at which the brake pedal is pressed. During emergency braking, it ensures full brake pressure is applied more quickly. Finally, Volkswagen’s acclaimed Automatic Post-Collision Braking System triggers braking after a collision, with the aim of preventing secondary collisions. After a short delay, the vehicle begins a phased braking action down to 6mph, during which the driver can take control at any time.

UK prices and final specifications for the new California range will be announced shortly.

About the Volkswagen California

Since its launch in 1988, the California has become the benchmark vehicle in the campervan sector. 22,000 examples of the first T3 California models were produced – with the T4 version recording 39,000 sales. More than 50,000 examples of the outgoing T5 version have been sold to date. The California remains a unique offering by being the only factory-built campervan on the market. Production of the new model will continue at Volkswagen’s bespoke assembly facility in Hanover, Germany.

Up Next: Cabin In The Sky: Stay In Fire Lookout This Summer

Saving…
Cabin In The Sky: Stay In Fire Lookout This Summer
Solution To The Worst Problem In Beer Pong
×