Home » Camping » A Car-Top Tent Changed The Way I Camp

Car-top tents are a relatively new genre of camping gear in North America. They are essentially tents that pop-up, or fold out, from on top of a vehicle.

After a month on the road in a model from Tepui, I’ve come to love the style of camping for some situations. Rooftop tents are a neat new tool for campers.

Call it a rooftop tent, car-top tent, or pop-up, these new-fangled camping rigs are making ripples in the media. If my experience over the last month is telling, you can expect to see them at a campground near you very soon.

A tent on your car or truck may seem a little counterintuitive. Why not just set it up on the ground? After driving from Colorado to Alaska with a Tepui Kukenam Ruggedized rooftop tent mounted on the camper top of my Ford Ranger, I’m a believer. 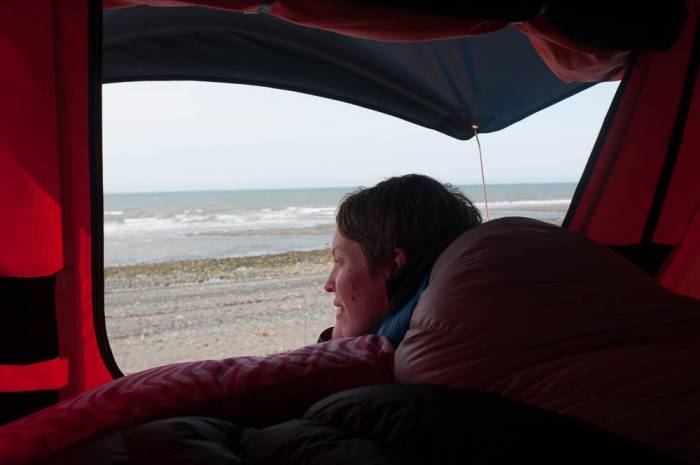 The rooftop tent has changed the way I camp and opened up new alternatives. It has plusses and minuses, but it is the greatest new product I’ve found in years to get a great night’s sleep in the outdoors.

This post is meant to explain rooftop tents, providing background on these contraptions and answering some of the questions my fellow campers have asked. We’ll update this article as needed to stay in front of the genre.

For a review, check out our post on the Tepui Kukenam Ruggedized rooftop tent.

And no, I won’t be giving up my backpacking tent. But if I’m car camping… there’s a pretty good chance I’ll be popping the top regularly for the foreseeable future.

Car-top tents are pretty new in North America. In Australia, and other places with more nasty bugs and critters on the ground, they caught on years ago. But here, they still are pretty novel, and you’ll get looks when setting this thing up.

But the curiosity is warranted; it looks nuts, and folks will wonder how it doesn’t fall off your truck. The answer is you need a darned good roof rack, and at least the Tepui model I tested is built like a tank. Read the full review for more, but so far it’s withstood winds in excess of 50 mph with no problem.

Setting up the Tepui (and most rooftop tents) is really easy, and one of the positive points. You can store bedding inside the tent if wanted, and it has a built-in memory foam mattress, which is more comfortable than any sleeping pad I’ve used.

Once set up, you access the tent from a ladder. It is pretty similar to a normal, heavy canvas camp tent in many ways, just sitting on a flat steel platform on top of your vehicle. On my truck, I’m set up about 7 feet off the ground on my topper. With windows open, this really gives a wild perspective at campsites.

Rooftop campers exist in a weird intersection of RVs and tents, and you’ll immediately find yourself asking if you need to pay an RV rate or a tent rate at campgrounds. Seeing as I do not use electricity or water, I’ve settled on the usually-cheaper tent rate.

But the setup has some of the advantages of RVs, notably the ability to camp in places you’d never want to pitch a tent.

A Night In The Walmart Parking Lot

Driving the ALCAN from Colorado to Alaska on one late night, my wife and I stopped in a Tim Hortons to grab some WiFi and a donut. A group of cops walked in (I’m not kidding here) and I asked one for suggestions for a good place to camp for the night. His reply?

“There’s a Walmart right down the road. Just set up by the other RVs.”

A pleasant quirk of Walmart, many allow you to sleep in the parking lot. I never considered it as a tent camper. The Walmart was an hour closer than the next campground, which would likely be closed anyway as it was early May and most facilities were still shuttered for the winter. Walmart it was. 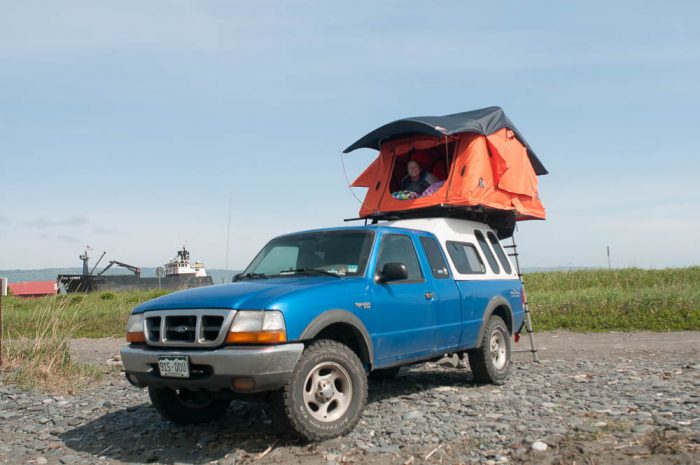 A few minutes later we were set up and zonked out in the Walmart in Grand Prairie, Alberta. I got a great night sleep in a place I’d never consider camping in a tent.

This has played out several times since adopting the rooftop tent. It opens a world of camping in places that would downright suck in a traditional tent. The Tepui’s heavy material is dark and strong, providing privacy and at least a perception of more security than sleeping in a light tent on the ground.

This setup also lifts you above rocks, uneven ground, pine cones…it’s always the same flat surface, even if you’re on a paved parking lot.

Pro: The Tepui I tested is very comfortable, easy to set up, durable, and weather-proof. It creates a flat surface to sleep on, and I wake well rested. Compared with a ground-tent, I think I sleep better in general. I can’t speak to all roof-top tents, but the heavier materials allow for thick mattresses and great weather protection.

When compared with an RV, the rooftop tent system is dramatically cheaper. It’s also much easier to drive, given that you are driving your normal vehicle versus a land yacht. No, you don’t have a bathroom, shower and kitchen sink on board. But my wife and I do carry a large water cube, two-burner stove, and a YETI cooler. So really, our system is kind of the budget RV.

Compared with sleeping in a topper or car: An advantage of this system for us (compared with sleeping in the truck bed) is that the topper is now wide open to carry gear. Nobody needs to sleep there, so you can pack it full. For us, this was huge, as we were on a two-month trip to Alaska and needed a mix of professional clothing and toys like bikes and hiking equipment.

Similarly, and especially in bear country, you can secure your gear inside the topper when not in use and at night. This is also good for pricy things you don’t want to leave sitting out at camp. The topper is no longer a bedroom, but instead becomes your gear locker and kitchen, with the bedroom up top.

The negative compared with a topper (or sleeping in a car) is that you will stand out. People will notice this parked in a lot. It also is less fuel efficient and more expensive than just sleeping inside the vehicle.

Con: You can’t set up your tent and drive away. That is the biggest negative for the rooftop system. If you want to set up a week-long camp and then use your car to go on excursions, well, you have to pull down the tent each time. You may also need to leave something in your campsite to hold your spot.

The Tepui Kukenam Ruggedized rooftop tent turns your car or truck into a palace on wheels. We drove it up the Alaska Highway for this review. Read more…

Another negative is that the tent does hurt fuel efficiency some and can affect the performance of your vehicle. I’ve not really noticed a big change in my Ford Ranger, but I suspect it costs me a half-mile a gallon or so.

The truck doesn’t seem to handle any differently, although I’m sure it would affect high-speed cornering, something I’d never even consider in a pickup truck with a topper anyway. For serious off-roaders, it does raise your center of gravity, but if you’re getting weird, rock crawling on sketchy trails, you already knew that, right?

Price is another factor. Rooftop tents aren’t cheap (ranging from around $1,000 to $2,000 or more, and a rack system can add several hundred dollars to the package). When compared with a high quality tent and sleeping pad package, the price difference shrinks, but the rooftop system is still considerably more pricey.

There are three main types of roof-top tents, those similar to the Tepui, which open like a book and have a heavy canvas body and roof; literal “pop-ups” that have a hard top and canvas body; or those constructed completely into the vehicle as an after-market customization (think VW pop-tops).

The Tepui I tested is the fully-fabric version. These can be set up to fold to the side, or to the back, depending on the type of vehicle and configuration desired. A bonus to me using the full-canvas Tepui was that I can fold it open over my tailgate, which provides significant shelter for cooking or just hanging out in the rain.

Hard-top tents pop straight up, or tilt up from one side, they are regarded as super fast to set up. I’ve never spent the night in this style, but would be a little more concerned about high winds compared with a canvas tent like the Tepui.

Rooftop tents require a strong roof rack to carry them. They weigh well over 100 pounds, so be certain of the capacity of the rack you plan to use.

I used a Yakima system with Core Bars and Skyline Towers with my Tepui system, and it’s proven to be great, especially because the towers can be removed with just the flipping of a lever, allowing the whole rig to be lifted off relatively easily.

The initial installation of the Tepui on my truck was pretty easy, accomplished by three guys in about an hour. It will vary depending on the tent and vehicle used, but plan on an afternoon and be sure to have some helpers and tools on hand. I go into more detail about installation in the Tepui Kukenam review.

A rooftop tent will really benefit those on extended trips that are largely on the move. It was perfect for the Alaska Highway, and would be perfect for campgrounds and nasty weather.

It’s also great if you plan to spend a lot of days in your vehicle. Those living weeks or months on end on the road and in campgrounds will really appreciate the added comfort of this setup.

Those on a budget or who only camp a few days a summer will be better served with a traditional tent. In addition, people who want to set up a tent for several days and move the car in the meantime will also find a standard tent easier to manage.

–Got questions about car-top camping? Leave them in the comments and we’ll answer them as best we can.