There’s no better litmus test for how much I’ll use a piece of gear than a wintertime car camping trip. Read on for our cold-weather camping favorites.

Whether it’s useful in water, in snow, or around camp, if a product withstands the flogging of these environments, it will serve me well most anywhere.

This winter, I found a silver lining in isolation, chasing waves along the northern Pacific Coast in my trusty truck camper, Max. I camped at beaches from Santa Cruz, Calif., up to the Canadian border, pulling off for a week of backpacking, and then climbing east for a handful of snow days.

After a soggy winter of testing gear and warding off cold, I nailed down my current short-list of essential, non-essential gear for wintertime adventure. 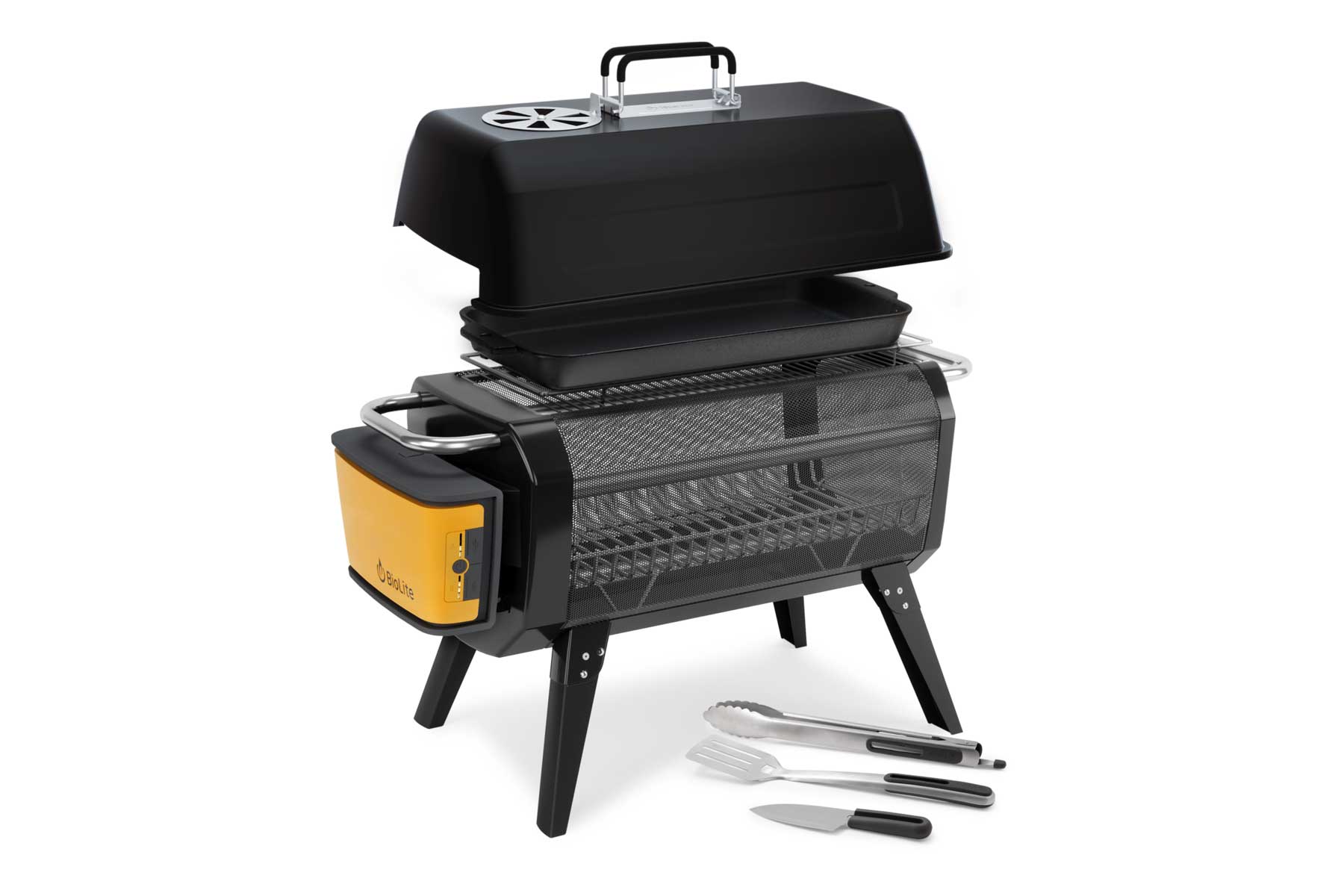 Released this January, the FirePit+ ($250) is a three-fer unit: a smoke-free, wood-burning fire; a charging station; and a grill. Most importantly, it makes campfires safe and convenient, which opens the door to enjoying fires in a variety of places.

I use it on every truck camping trip, on the deck of my sailboat, and tailgating in the parking lot after particularly cold surf sessions.

The feature that sold me was the battery pack attachment, which I initially wrote off as a gimmick. The pack clips to the side of the pit and powers a simple, adjustable aeration system designed to help start the fire and keep smoke at bay.

Thanks to the air jets that line the chamber and pump oxygen to fan the flames, I’ve been able to start campfires with just matches and kindling, even in rain and high wind. Once the fire’s blazing, the smoke disappears thanks to the added aeration.

The battery pack features a USB port for charging devices, and with the fan on its low setting, it lasts me about 8 hours on a single charge. Pair that with BioLite’s new cooking accessories — a griddle, a reflective fire mat, a barbeque, and some sturdy cooking utensils — and the fire pit morphs into a killer BBQ unit. It’s a serious crowd-pleaser.

The self-contained design makes cleanup easy — just wait until the coals cool and safely dump them out through the base port. Fully assembled, the legs retract into an easily transportable 2 x 1-foot package that weighs less than 20 pounds. Altogether, it earns its space in my camper.

The FirePit+ is a major update to BioLite’s original FirePit, first launched on Kickstarter (which also had a battery pack and smoke-free design). Updates included increased battery life and charging capability, more accessories, and an updated material/ventilation design.

The full BioLite FirePit+ Bundle With Cooking Accessories retails for $415. 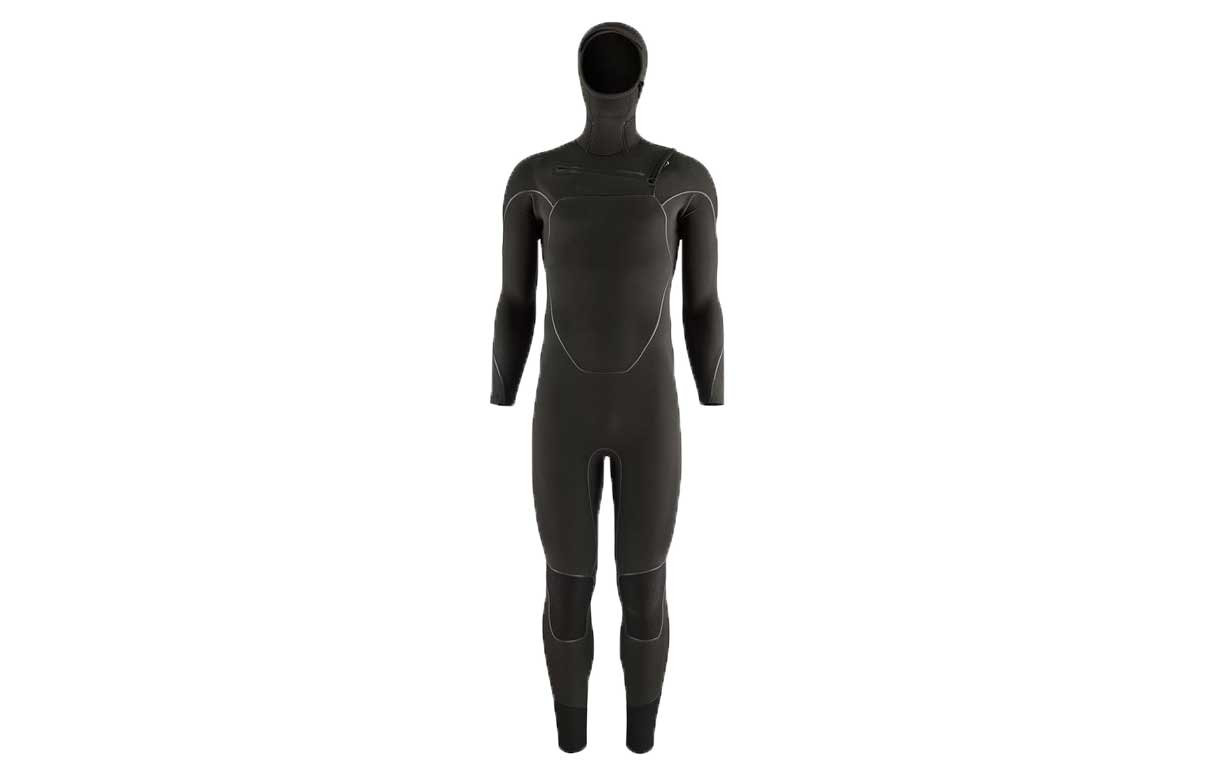 Patagonia’s newly redesigned Yulex wetsuit is like the Cadillac of cold-water armor, but with a much smaller carbon footprint.

After rocking the 2017 model for 2 years (it finally ripped at the ankle seam), I picked up the new hooded Yulex R4 ($549) last fall. The upgrades in comfort were immediately noticeable. The 5.5/4mm suit, a combination of natural rubber and 100% recycled polyester and spandex, kept me toasty in sub-50-degree Washington saltwater. And it pairs well with Patagonia’s R4 booties and R2 gloves.

Where typical 5/4s are debilitatingly stiff, the R4’s redesigned seam pattern across the shoulders offers flexibility akin to a much thinner suit. This translated to more range of motion and paddle power for surfing. It also dries insanely fast, an attribute I’ve praised endlessly on cold days.

As for durability, the R4 now features wider tape and upgraded glue on the seams, making it less prone to tears, which was my only grievance with the 2017 model. It’s the most comfortable 5/4mm wetsuit I’ve ever tried.

And it’s also the most sustainably produced wetsuit of all time, which makes wearing it feel even better. (Patagonia made the Yulex sustainable by using Rainforest Alliance FSC-certified natural rubber instead of neoprene.) 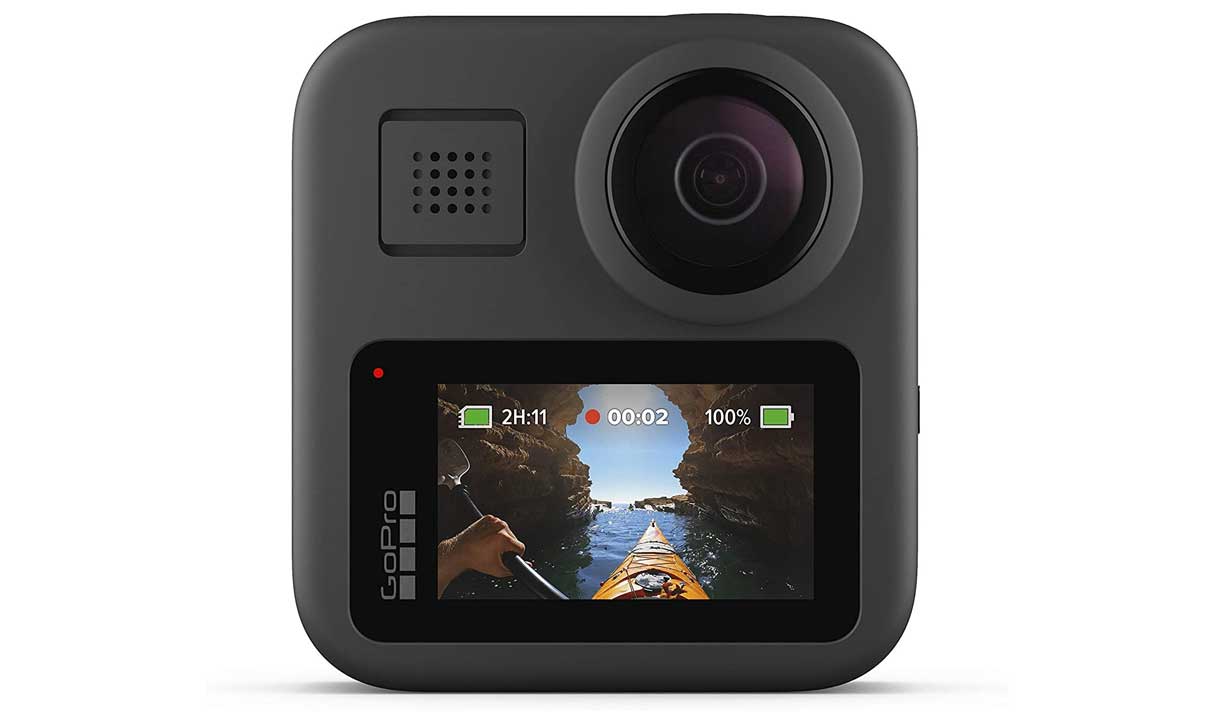 The MAX ($499) is a staple in my repertoire in any season. It makes for especially epic footage on powder runs, in big surf, and for timelapse videos on the road. It’s the most versatile camera I’ve ever worked with, essentially three cameras in one. Plus, it comes with a handful of digital lenses that drastically expand the shot potential.

First, the GoPro MAX is a 6K 360-degree cam, with two back-to-back 180-degree lenses on either side of the camera. This gives the camera a spherical view and makes pointing the camera less critical, which is a huge advantage for amateur GoPro users. With the right angle, the 360-degree footage looks like an overhead follow-cam, akin to a drone shot, which is an especially mindblowing view inside a barreling wave.

Secondly, the MAX is also a HERO camera — GoPro’s famous point-and-shoot model — and can accomplish wide- or standard-frame shooting. It’s got a Power Pano mode, which captures distortion-free, 270-degree wide-frame photos. And TimeWarp mode can create fluid timelapse videos in both MAX and HERO modes.

The MAX also houses an upgrade of six mini-microphones for awesome sound quality without the need for an external microphone. And you can edit the footage one frame at a time in the GoPro app on your smartphone. (You can also adjust other camera settings within the app too.) Really, there are too many reasons to invest in the GoPro MAX. It’s simply awesome.

But the most impressive feature of the MAX, for me, is the HyperSmooth technology, an integrated stabilization function that incorporates horizon leveling for a smooth, fluid shot, no matter the turbulence during your chosen activity. It’s waterproof up to 15 feet without any housing and has a viewfinder built into the body.

The only wintertime disadvantage of the MAX is the cold — it doesn’t like subzero temps. If you’re using it in the snow, I recommend keeping it in a pocket or wrapped in a handwarmer to save battery. 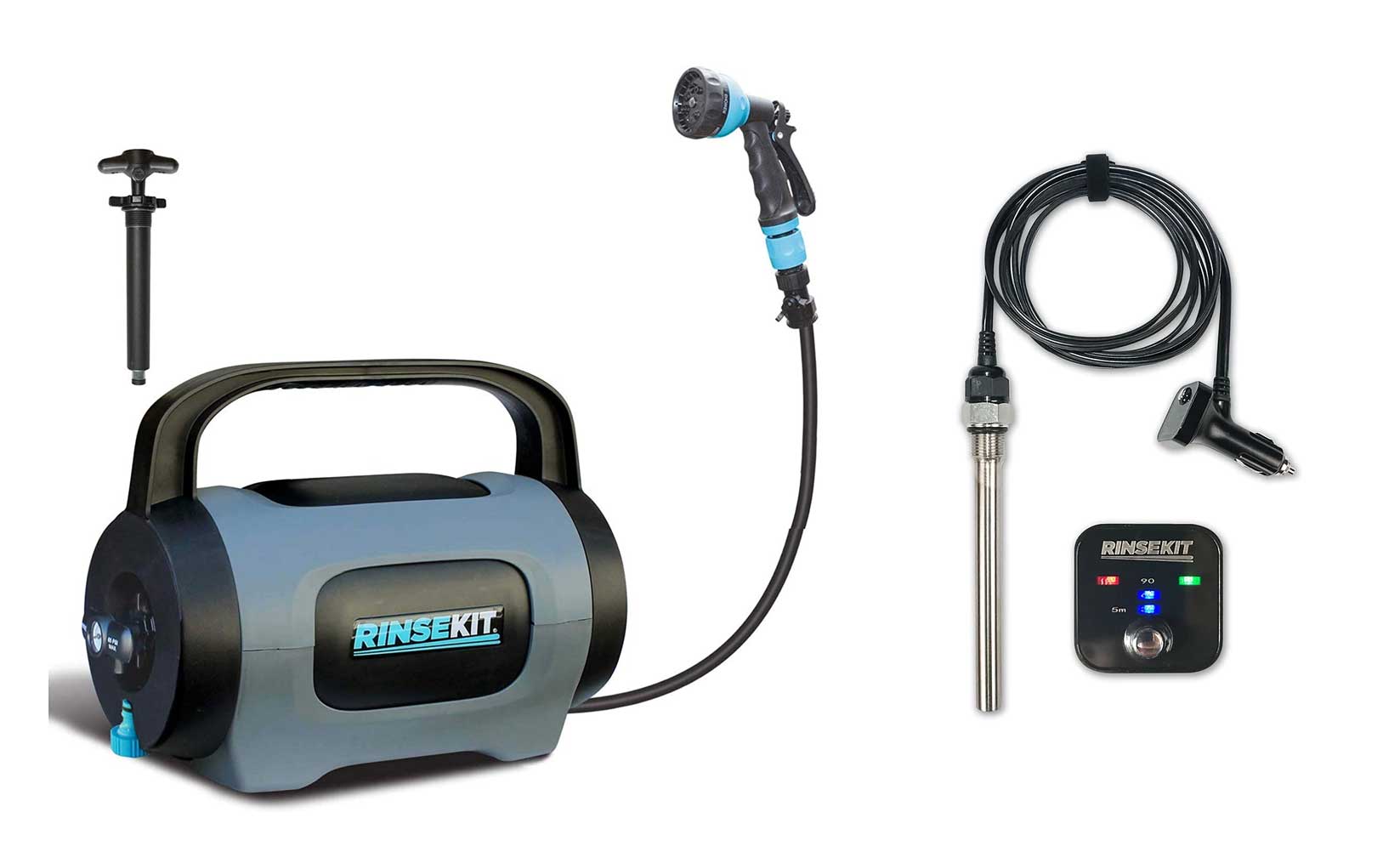 The RinseKit POD ($140) portable shower has been my solution for staying clean and warm for multiple seasons now. I use it for hot showers, hosing down gear, and even bathing the dog while on the road.

The POD fills from any sink or hose tap, which connects directly to the 1.74-gallon reservoir via an included adapter. The reservoir is automatically pressurized by the spigot, and once full it holds pressure for up to a month. If the pressure is lost for any reason, the tank can be re-pressurized with a separately sold pressure booster. We tried it and found it always does the trick.

Bundle that with my favorite accessory — the DC-powered Hot Rod Water Heater ($70) — to create a hot shower that warms directly from your car’s cigarette lighter! And if your car’s 12V jack is broken (like mine is), RinseKit also offers a hot water sink adapter.

The POD is the smaller of two RinseKit models. The larger is the RinseKit+, which offers a 2-gallon reservoir and can hold pressure for up to 2 months. I’ve owned both models, but the POD works best for me. I’d say that’s partially due to the POD’s compactness and partially because the RinseKit+’s reservoir blew out on me after a few months of use. But when I’ve had issues, RinseKit’s customer service is always quick to resolve the problem.

For a no-frills, durable rooftop cargo box that won’t blow your budget, I like the SportsRack Horizon Alpine. It’s a simple solution that got me through a rugged winter. I scored mine on Craigslist for $80, but you can find it new online for around $300, a low price point that, for me, is the biggest draw (I just can’t justify spending $1,000-plus on a cargo box).

The Horizon Alpine boasts an 11-cubic-foot carrying capacity. It’s modest, but enough to fit two or three snowboards with bindings, as well as boots and a few smaller items. If you need more space, the Horizon XL is a similar build but with 17 cubic feet of capacity.

The Alpine isn’t awkwardly bulbous, unnecessarily heavy, or overly designed like some roof boxes. And while it’s not the most bulletproof box on market, the thin ABS material still held up under the weight of heavy snow.

I wouldn’t trust this box with my life savings, but it’s enough to give me peace of mind in most places. It fits snug on my truck’s custom round-bar roof rack and can adjust to fit most factory racks. Another bonus: It was light enough to easily install by myself. It also features a quick-release mounting system for equally simple removal.

The Horizon Alpine is my budget-friendly answer to an otherwise absurdly expensive car camping luxury. If money wasn’t an issue, I’d look to the Yakima CBX Solar, which features a built-in solar panel and two USB ports (as well as a $1,300 price tag).

We spent a day riding powder with 57hours guide Willie Benegas. Here's what it's like to backcountry splitboard with a guide and the gear we tested. Read more…