Arapahoe Basin, the highest ski resort in North America, released plans to expand its summertime activities. It recently proposed a new via ferrata and mountain bike trails on the mountain.

Skiers often look at Arapahoe Basin as a locals’ mountain. It’s smaller than its nearby Summit County, Colo., competition. It also lacks lodging or many businesses at the base. For many, that’s part of its charm. 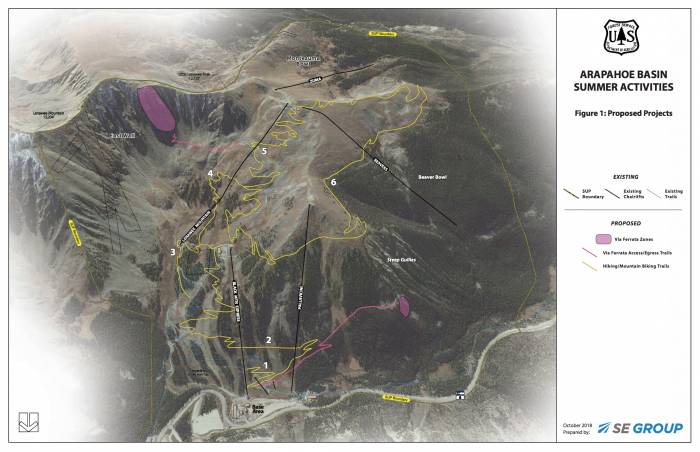 Arapahoe Basin sits on land leased from the White River National Forest. Thus, the proposal must go through a regulatory oversight phase. The main proposals are for mountain bike trails and a via ferratta, a fixed climbing system that allows beginners to safely access vertical terrain.

Alpenglow Expeditions, a guide service based in the Lake Tahoe area, opened Tahoe’s only via ferrata earlier this month. Read more…

According to the document, the proposed action is meant to meet the demand for summertime recreational opportunities. Anyone who visits Summit County in the summer will note the region booms with tourism during warmer months.

Arapahoe Basin currently has limited mountain biking and hiking, with entry limited mostly to a dirt access road. The proposal would diversify the “difficulty, variety, and spatial extent” of trails.

Specifically, it would build about 10 trails for hiking and mountain biking. These would include some trails with banked turns and other “manmade features.” Sounds like A-Basin is considering some actual downhill trails in its future.

Via Ferrata at Arapahoe

The proposed via ferrata (Italian for “iron path”) would span two sections of the mountain: a lower course and an upper course. On each, the resort would require guided guests to wear harnesses attached to safety equipment, which is affixed to the rock.

The lower course would cross a 200-foot cliff band in the Steep Gullies area of the mountain. Officials expect between 20 and 50 guests would use this via ferrata system each day.

The upper section would be more advanced. There, climbers would scale a 700-foot cliff band on the infamous East Wall section of A-Basin. This climb sits entirely above treeline. It would “provide a unique, high-alpine experience with opportunities to summit the East Wall ridge.”

As the proposed project sits on leased public land, the project is open to public comment.

Up Next: Patagonia Publicly Endorses US Senators for First Time