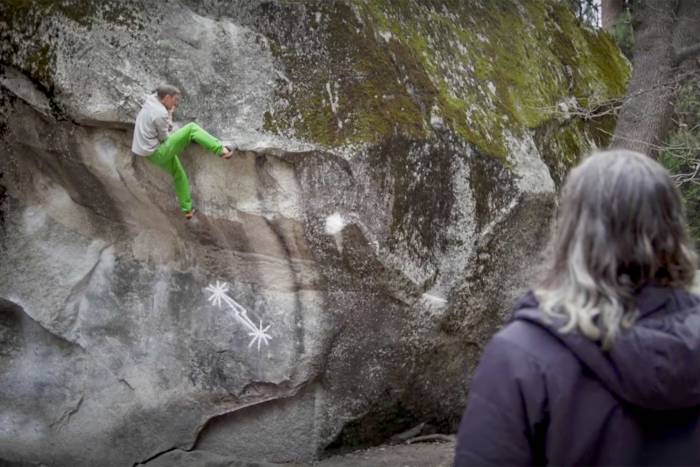 Within Yosemite’s camp four sits the world’s most famous boulder: Midnight Lightning. A stark-white, chalk lightning bolt emblazoned on its middle points to the name.

Ron Kauk made the first ascent in 1978 and returns to explain the iconic line.

Lynn hill claimed the first female ascent and John “Verm” Sherman wants to climb it again. Many climbers believe it represents a true V8 difficulty, with climbs rated higher or lower depending on how they compare to Midnight Lightning.

Since the 1978 first ascent, the line remains a bucket-list ascent for climbers everywhere.

The name, “C’etait Demain,” translates to “looking backward.” Godoffe named it after the science fiction book he had just read by Edward Bellay.

“I found the name very symbolic for a transition from past to future,” recalled Godoffe in an interview with Mammut Magazine.

In an area as infamous for bouldering as Fontainebleau, the first 8a climb remains a test-piece for visitors.

The super steep “Dreamtime” route in the Ticino area of Switzerland boasts delicate crimps on a nearly 45-degree overhanging blank wall. Fred Nicole made the first ascent in 2000 and rated it 8c (V15), debatably the hardest climb in the world at the time.

He reflected on the naming of the route in Mammut Magazine:

“‘Dreamtime’ means a kind of half-dreaming trance, somewhere between dream and reality, or a dream that becomes reality. When I saw the line for the first time, I thought: ‘Wow! Is that even possible?’ And then it finally happened.”

Up Next: New Study: Treat Anxiety, Depression with… Bouldering

Saving…
New Study: Treat Anxiety, Depression with… Bouldering
This Bouldering Pad is Made to Carry
×