Petzl crashes into the bouldering category with the Alto, a pad that combines proven materials with a novel — maybe ingenious — design.

When Petzl released the Alto crash pad in 2014, the core boulderers in my circle met it with disdain, calling it the “prima donna” of crash pads. The brand wasn’t active in bouldering, and it stood out with its unorthodox zipped closure system.

In short: Despite Petzl’s unproven reputation in the bouldering category, the brand’s climbing-specific resources and fresh approach give rise to a crash pad that offers both reliable performance and innovative creature comforts. Of course, this combo comes with a steeper price and a couple of key maintenance considerations.

But after 4 months of testing, the Petzl Alto crash pad earned acceptance by my crusty bouldering group. From granite alpine boulders in Colorado to the desert crimp ladders at Hueco Tanks, the Alto crash pad now holds a trusted position in my tribe’s pad collection. 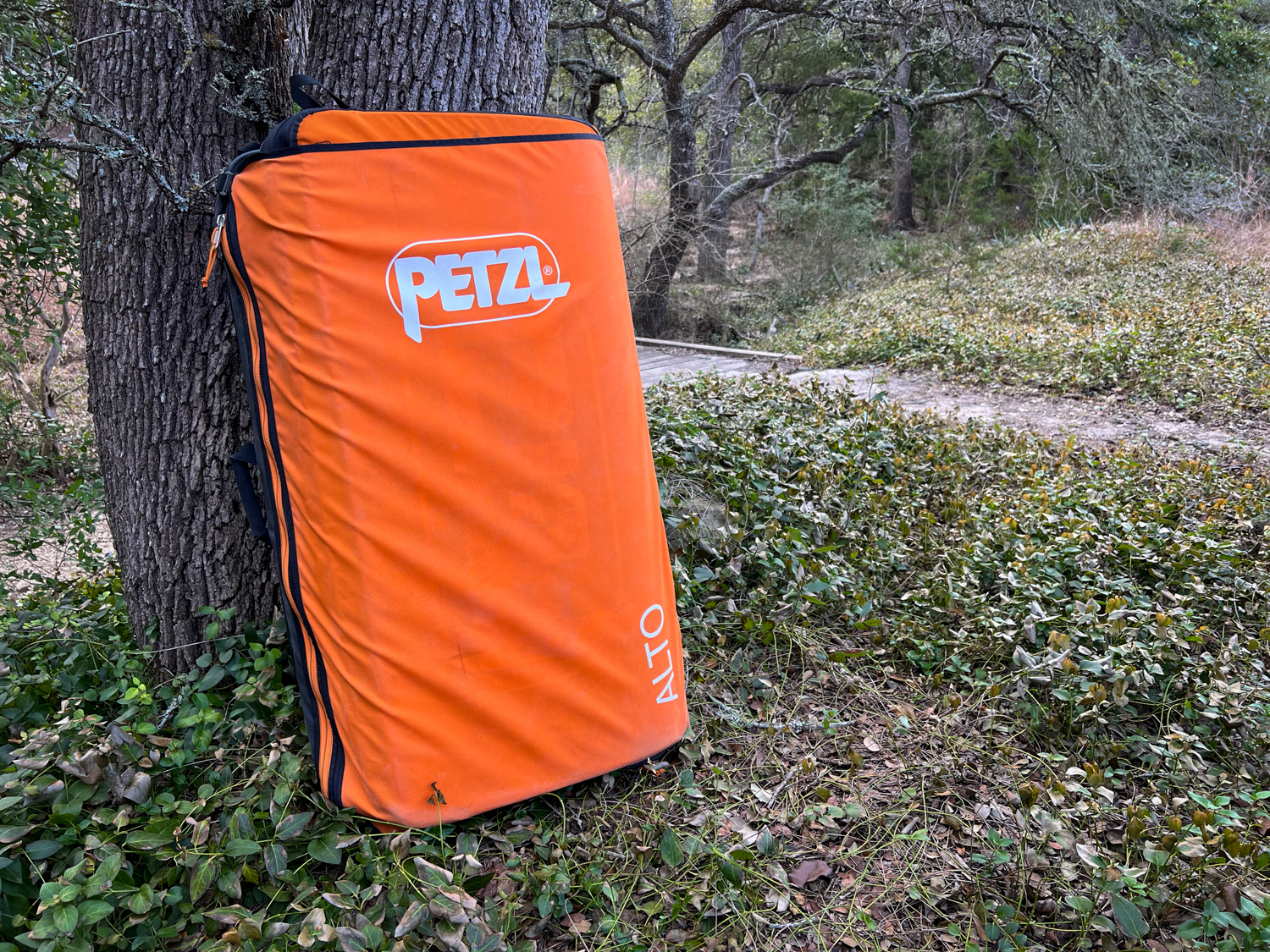 Bouldering pads are all about the foam, and Petzl chose wisely. Its combination of a 3-inch layer of open-cell PE and a one-inch dual-density layer of closed-cell PE differs from all my other pads in my extensive collection. Those pads use a sandwich, placing closed-cell foam on both sides of an open-cell foam center.

In the Alto, however, all the foam is continuous, so there are no breaks or hinges.

Petzl claims that its combination of foam proved the most effective in laboratory tests, and keeping the dual-density closed-cell layer on the outside of the fold enhances longevity.

The outer materials felt extremely stout during unboxing. The waterproof Cordura ballistic nylon covering screamed rugged, as did the large #10 YKK zipper for the flap closure. A 1.75-inch-wide webbing acted as a shoulder strap for the unfolded pad, and it also functioned to form a couch out of the Alto. 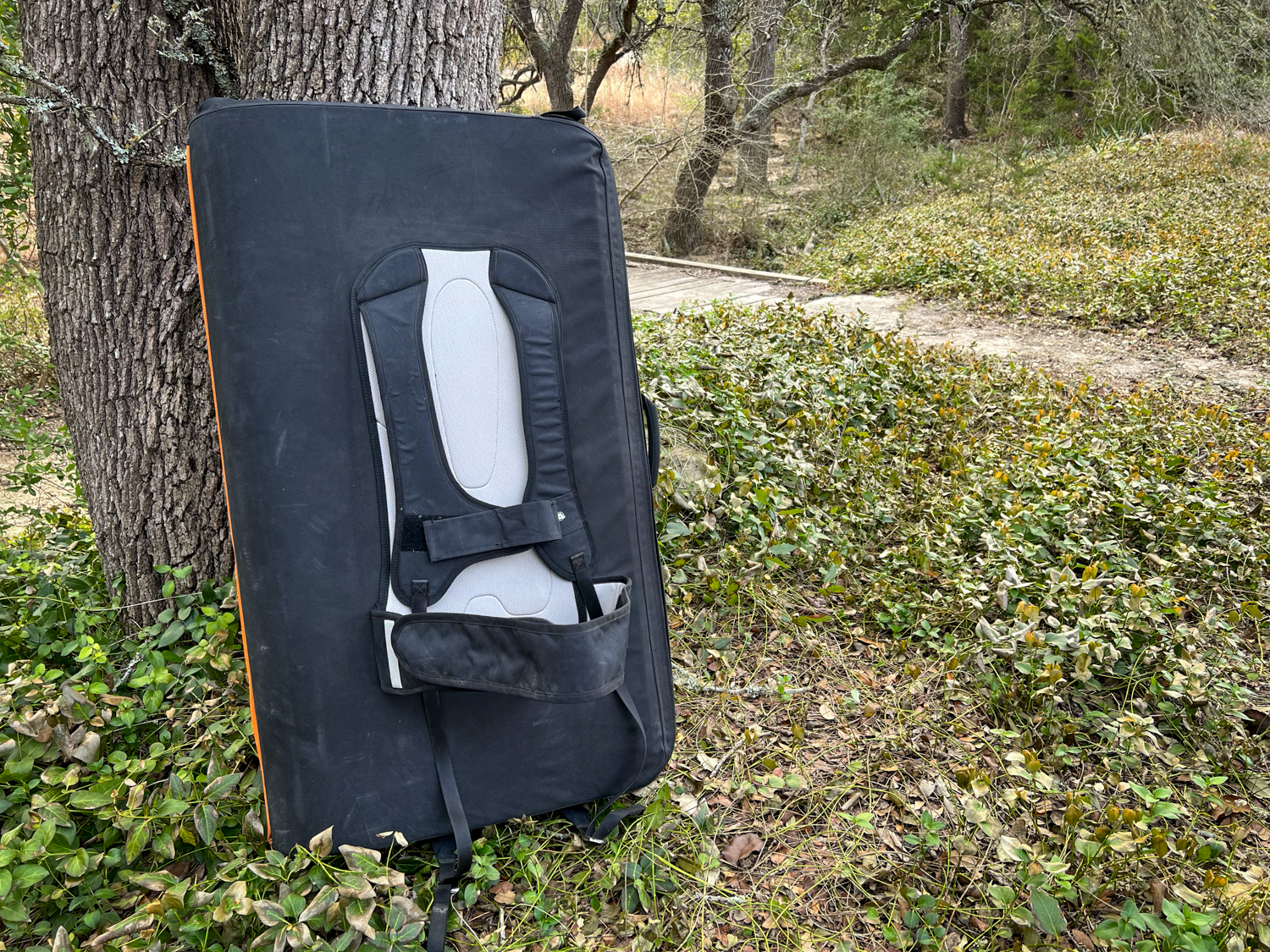 The taco-style pad folded, so the closed-cell foam layer rode against the back, which delivered the support required for an efficient carry.

The wide shoulder straps and hip belt provided massive load spreading capacity, so I never felt any pressure points regardless of how much I stuffed into the Alto. Among the several brands of pads we transported during bouldering trips, the Alto was among the favorites to carry, especially by smaller climbers.

As a slender, 6-foot-tall climber with broad shoulders, sometimes the edges of the shoulder straps would dig into my collarbones, but an adjustment would correct any discomfort. 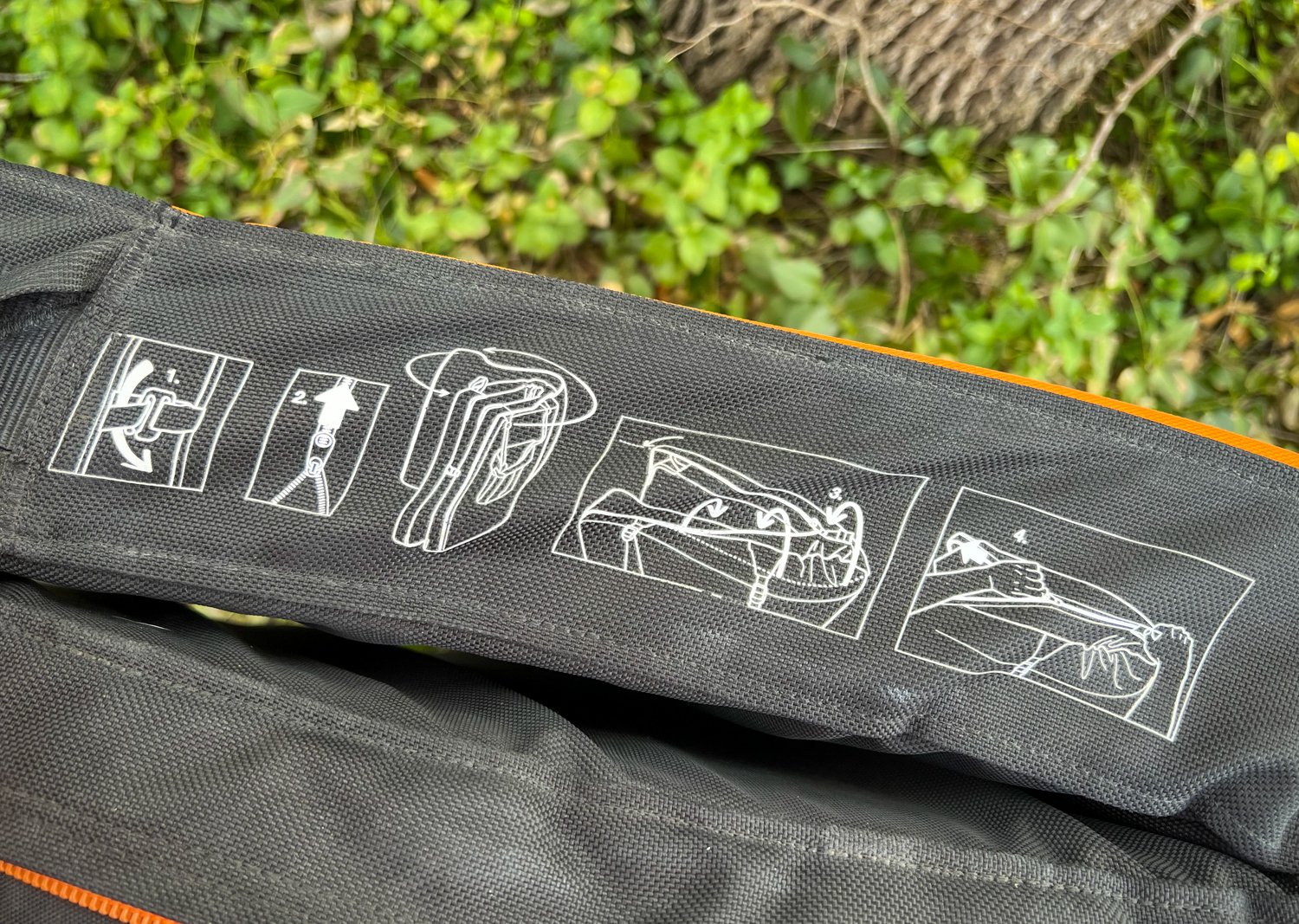 The bright orange closure flap zipped along the bottom and side, forming a sealed pocket. Only the top remained covered. The Alto folded tighter than any other taco-style pad I’ve used and was the most secure standalone method of hauling gear to the blocs out of all the pads I’ve tested.

There was no need for a separate bouldering bag, and regardless of how rough the approach was, there was never a concern that anything would fall out of the Petzl Alto. But because of how tightly the pad folded, bulky items didn’t fit.

Falling on the Petzl Alto 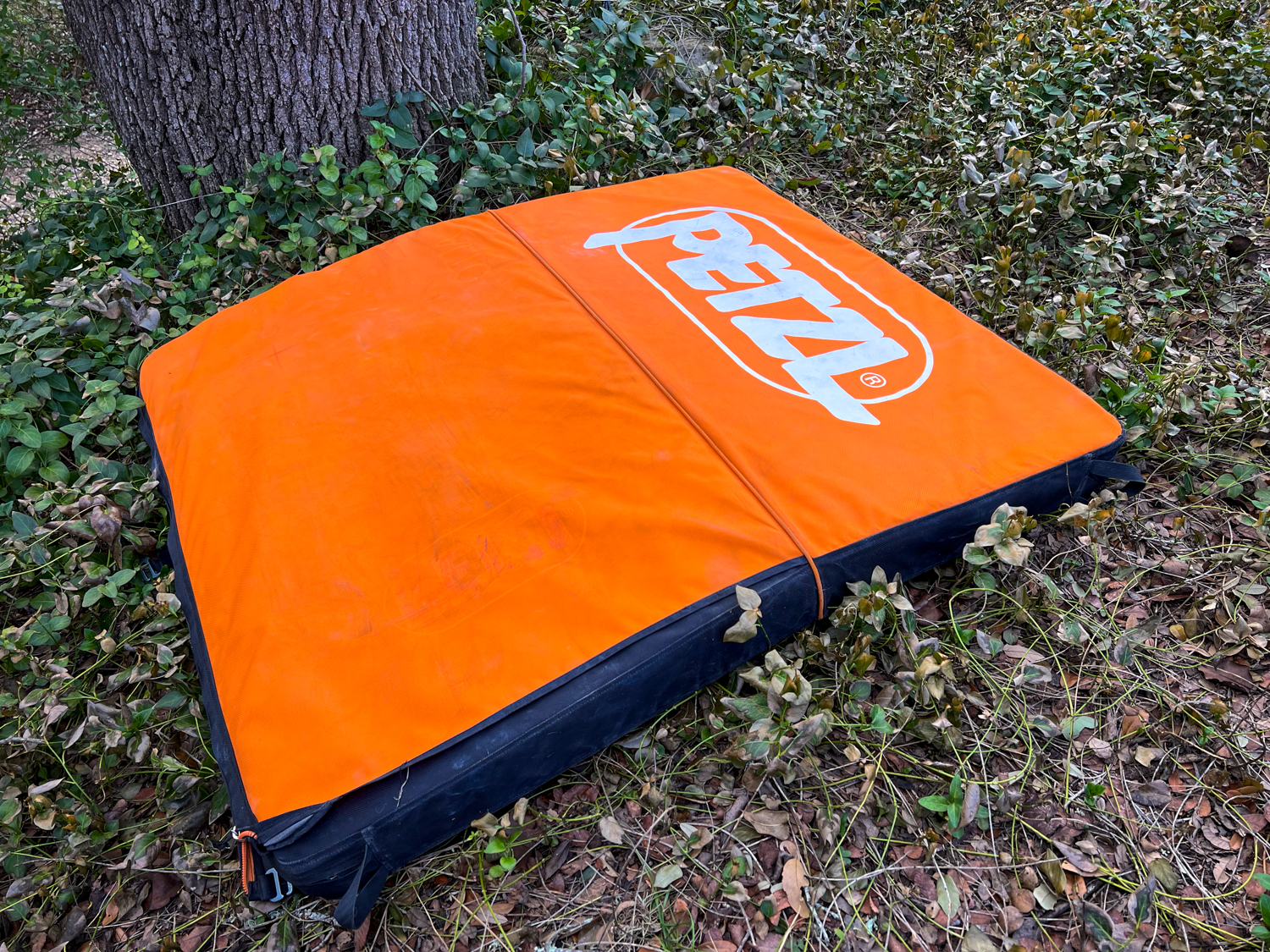 Contrary to all other pads that I have, climbers fall on the same side of the pad as the shoulder straps and hip belt. This configuration caused initial confusion, and when we laid down the pad with the straps on the bottom (like all other pads I own), the landing felt much too soft. And the logo was hidden, which made no sense.

But flip the pad over, and seemingly against common sense, the Petzl closure system and suspension construction proved clever. The closure flap flips over to zip the shoulder straps and hip belt beneath it, and the flat profile and lack of hardware on them suddenly made so much sense.

Like other 4-inch-thick pads, the crew felt confident falling on the Petzl Alto off boulders up to about 12 feet tall. After that, we all preferred to fall on the 5-inch-thick pads.

The flat profile of the shoulder straps and hip belt, tightly tucked behind the closure flap, never hindered a safe landing. And any surface touching the body during carrying stayed clean and mud-free.

The unique construction that places an open-cell layer on the bottom of the Petzl Alto also allowed the pad to conform to minor irregularities in the landing zone much better than a pad with closed-cell foam. While some pads wobbled on baseball-sized boulders in the landing zone, the Alto held steady.

The bandolier-style shoulder strap has two halves secured with Velcro. Folding the pad in half and threading the straps through a pair of loops formed a couch. The couch had the stiffness to support a more diminutive lounging climber but lacked the rigidity for taller and heavier crew members.

This shoulder strap was also the primary way to move the pad between adjacent problems. Because folding the Petzl Alto proved a more complicated affair compared to other pads, moving it in the open configuration was the way to go unless we moved to another area. This was less convenient than picking up a folded hinged pad or buckling a taco-style pad, but it wasn’t a deal-breaker to anyone in the group.

There are loops in each corner and one grab handle (for carrying the folded pad) on the side opposite the bandolier strap. But I would have preferred more grab handles to shuffle the pad under the climber and aid in hoisting it on the back when heavily loaded. However, the lack of suspension on the bottom made sliding the pad snag-free.

One concern was the longevity of the zipper. It is the stout, proven YKK #10, but we constantly subjected it to dirt, small rocks, and endless dust. Although it never snagged or felt rough during the testing period, if it ever failed, the pad would lose the ability to remain folded, rendering it useless except under training boards.

Any boulderer who gets the Petzl Alto should maintain the zipper to ensure a lifetime of use. Keep it clean and potentially lubricate it.

Another concern was the Velcro used on the suspension system, which isn’t user-replaceable.

I never doubted that Petzl could produce quality climbing gear. Still, I understood the reluctance by core boulderers in accepting pads from the brand due to its lack of sweat equity in the discipline and subculture. Then, the “fancy” looks of the Alto, the bright orange color, and the colossal logo didn’t do the pad any favors.

But as months of testing wore on, I could see the functionality and features of the Petzl Alto win over my staunch crew. The foam absorbed impacts safely for anything but highballs and provided a stable landing surface. And it proved durable under hard and frequent use.

The zipped flap closure made it the most trusted gear hauler, and the way it covered the suspension system for the landing side was slick. Anchoring the low-profile suspension on the side with the firmer foam produced desirable carrying characteristics.

The downside to the clever features is that they drive up the price. The Petzl Alto is a whopping $100 more than the similarly sized Metolius Session II.

In the end, the Petzl Alto earned its place in the van for bouldering road trips with the crew.

Up Next: The Definitive Guide to Climbing Jargon

Saving…
The Definitive Guide to Climbing Jargon
Breaking: Avalanche on Cerro Torre Strikes One of the World’s Best Climbers
×