A team of amputee mountaineers climbs one of South America’s most iconic and challenging peaks to raise money for others in need of prosthetics.

In September 2019, a group of amputees set off to climb Cotopaxi in Quito, Ecuador. Cotopaxi is a commitment; at 19,347 feet tall, it takes many days of acclimatization and 7-10 hours of climbing to reach the summit.

It’s also one of the world’s tallest active volcanoes.

The Range of Motion Project nonprofit, which provides prosthetics and resources to underserved populations around the world, filmed the expedition to create awareness. Its sole goal? Mobility for all.

This year, another team is heading down to South America to complete the same climb, scheduled for September 2020. The 2020 team will be similar to last year’s: half amputee and half non-amputee climbers.

This is the sixth annual climb as part of the Range of Motion Project’s global awareness event. The full film released today.

“In Her Shoes” was produced by Silverline Films in collaboration with Merrell. 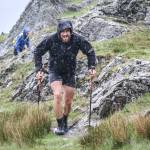 214 Peaks in 1 Week: Running the Wainwrights