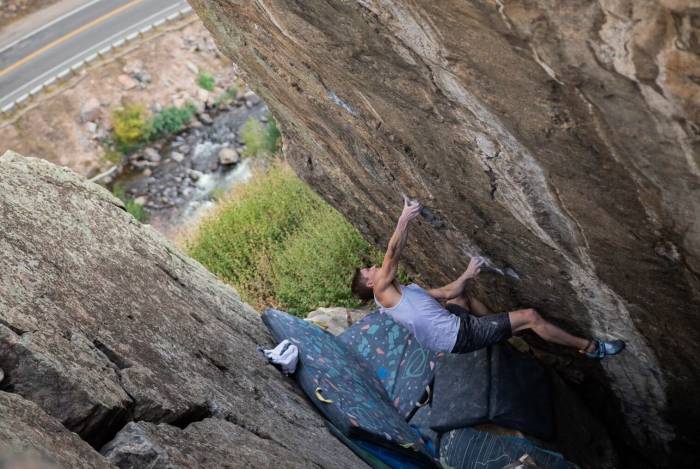 Threshold bouldering is about seizing opportunities, which don’t show up every day. Drew Ruana spent three straight days in the sweet spot earlier this month. Now, he’s got his sights on the current upper limit of V17.

Some of the things boulderer Drew Ruana is climbing these days don’t even look like boulder problems.

“The Player” (V15) is just a scar in a 90-degree roof with edges that are there or aren’t depending on whether you’re looking at them from less than 12 inches away. “Ozymandias” (V14) is more like a featureless wall on the concave side of a collapsing two-story building.

But Ruana is climbing the absurd things nonetheless and giving them boulder grades. From Oct. 5 to 7, the 23-year-old phenom cranked out three of the most productive bouldering days of his life.

First, he chopped out the second ascent of Daniel Woods’ stubborn “Ice Knife Sit” (V16), which fought off attempts for almost 10 years. The next day, he topped “Ozymandias,” a long, powerful rig of his creation.

Then he casually — I mean casually — completed the first ascent of “The Player,” which he first tried last year but couldn’t initially put together.

Not only did he crank out the three Colorado rigs over three calendar days, but he would have needed only two in terms of hours elapsed.

I would say Ruana can’t wait to climb even harder. But suddenly, the opposite is closer to the truth. At the physical high point of a career he’s spent dispatching V14/15 climbs like he gets paid by the job, Ruana’s recent rampage taught him one new, unexpected art: the siege.

“Gotta say a v16, v14 FA and a v15 FA in less than 48 hours has gotta be a new personal best,” he wrote on Instagram with the cheeky “stuck-out tongue winking” emoji.

The emoji choice either indicates Ruana’s disbelief toward the rash of nail-hard climbs or what could be a childlike playfulness toward his performance. Watching him dismiss the vicious sequences is reminiscent of a housecat playing with a grasshopper: Each exuberant movement holds evidence of the inevitable conclusion.

But talk to Ruana, and you’ll find he’s as down to earth as a lowball. He hammers out boulder problems and gym sessions as part of a dance with his schedule at the Colorado School of Mines, where he studies Chemical Engineering. Why? As a backup.

“If I blow my shoulder and can’t climb anymore, I better have a way to get a job,” he reasoned.

Ruana’s pocketing the long play, but make no mistake: He won’t give up climbing until he physically cannot do it anymore. His effortless agility on extreme terrain is the direct product of hard work.

“Ice Knife Sit” (V15 when it went up, V16 post-confirmation) took him 35 days of sessions during this year’s push alone. He said the tedious process frustrated him. Usually, he works on projects he can knock out with a few days of effort.

“It’s the longest time I’ve spent on a boulder and [still sent] it,” he said. “Then, when I did it, it felt perfect. I don’t think I’ve actually ever had a climb like that. I did not mess up a single piece of beta, everything was flawless. It felt like a different climb.

“It’s the hardest climb I’ve ever done as of now, and I am not kidding; it felt like V2 — just because of how rehearsed I had it. Days and days and days just perfecting moves on this one piece of rock. It’s such a special moment when it clicks.”

Ruana said he felt a blockage clear when he dispatched “Ice Knife Sit.” He felt looser and more or less breezed through “Ozymandias” and “The Player.”

Now he’ll take that unlocked resolve to his next undertaking: Shawn Raboutou’s “Megatron” (V17). Ruana counts his days on the rig (which just about everybody except Raboutou, including Ruana, says Raboutou finished this past winter) at 70 so far. He hopes now he’s within a few weeks of the send.

He talked about it in a way that convinced me he’s about to do it despite how absurdly hard it seems: a V14 stacked on top of a V16, with a V8/9 finish over 15 total moves. Underclings and crimps force body positions Ruana called “uncomfortable” for a final product that “demands respect.”

And he should know. He once came close to finishing “Return of the Sleepwalker” and said “Megatron” belongs in a different league.

“I have that climb memorized; I know it like the back of my hand,” he said of Raboutou’s project. “I know exactly what to do. Hopefully, my experiences over the past few days and the summer, that’ll all get me into better fighting shape this time around.

Editor’s note: I enjoyed spending a day with Ruana, who showed me around the magical boulders in Squamish, British Columbia. I’ve spent most of my adult life around young professional athletes. Ruana is a rare gem. He was impeccably polite and respectful and spoke eloquently about various subjects. And I was impressed that he equally valued his college education and climbing. Thanks, Drew, for showing this old-timer that the future of rock climbing is in good hands. 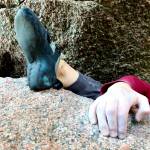 The best boulder problems of 2021 spanned the world and the limit of human ability on rock. Check out the best from Daniel Woods, Katie Lamb, and more. Read more…