Edelrid claims it cracked the code and has a bona fide, cut-resistant dynamic single climbing rope. We put it to the test.

In the summer of 2019, Edelrid announced it developed a way to use Aramid in dynamic ropes, releasing the first dynamic single climbing rope with cut resistance. Aramid lacks elasticity, but the German brand engineered a process that integrates nylon with the cut-resistant material that still delivers the elastic and energy-absorbing properties required.

We’ve been testing the Swift Protect Pro Dry 8.9 for a year, specifically at crags with sharp crystals and edges. The Aramid in the sheath shows no signs of cut damage through leader whips and long top-roping sessions over rough granite and sharp limestone. The triple-rated Swift Protect Pro Dry 8.9 was skinny and light for a single, but the added cut resistance inspired confidence when rock surfaces did anything but.

Edelrid packs the Swift Protect Pro Dry 8.9 using its 3D coiling method. I pulled the rope straight out of the packaging and avoided the bird’s nest of twisted and knotted cord that can result from other packaging methods.

Right away, I felt that the sheath had a waxy surface, and the rope was stiff. The triple-rated 8.9mm cord felt tiny for use as a single. I thought this rope, paired with half rope, would be the ideal setup for extended road trips when the climbing objectives and styles could run the gamut and storage space was limited.

The coloring and pattern were strikingly odd but very visible, which could be a plus, especially in alpine terrain.

The stiffness made it difficult to tightly pack the flaked 70m cord the first time. 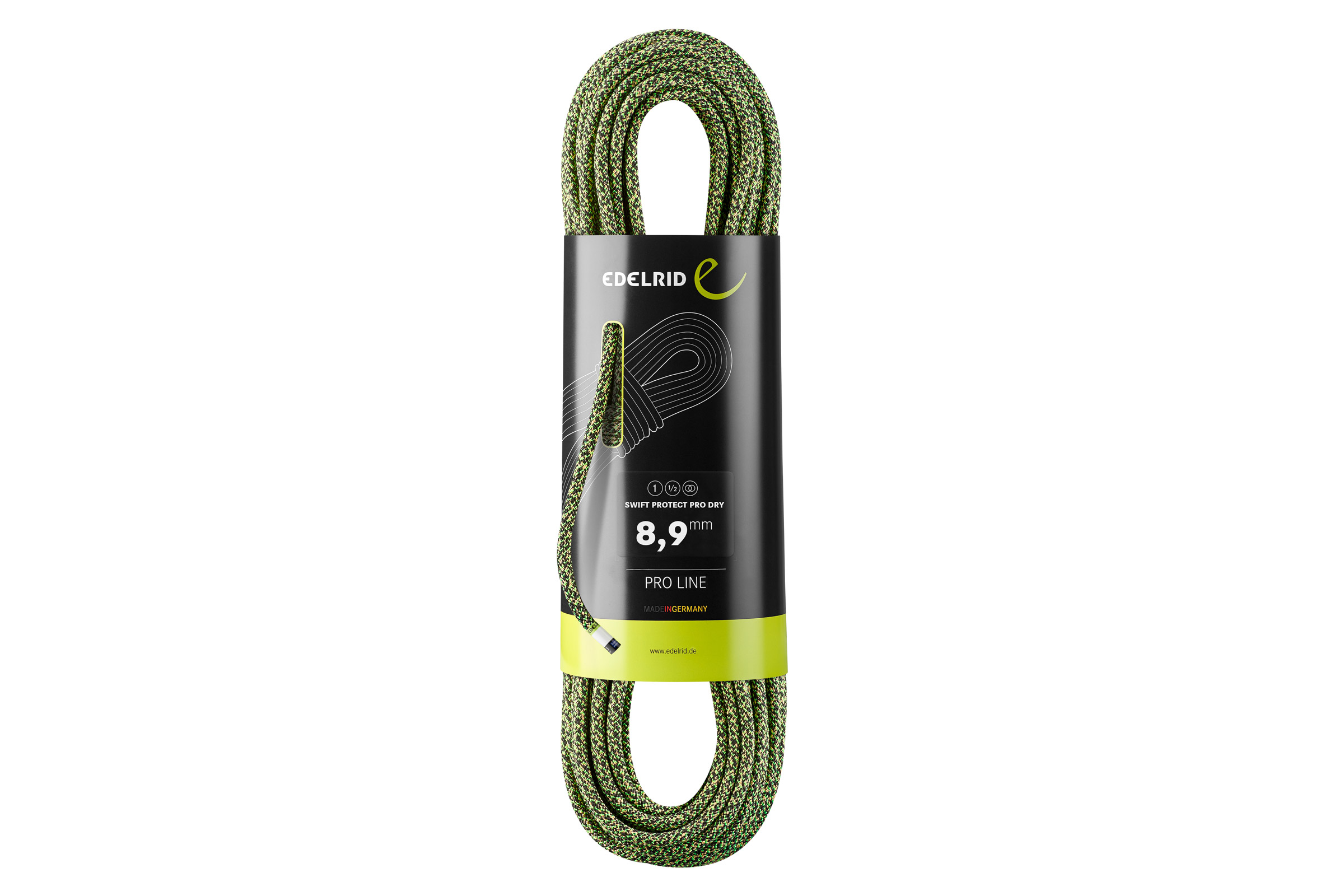 I saved the Swift Protect Pro Dry 8.9 specifically for use at two crags: Enchanted Rock and Continental Ranch.

The first was Enchanted Rock. This Central Texas destination features traditional and bolted pink granite routes with painful crystals protruding from the mostly slabby-to-vertical faces. The formations are pretty but destructive, shredding skin, shoes, and clothing.

It’s ideal for testing the durability of a rope sheath, especially when top-roping. The anchors are often far back from the top of the routes, and the low angles produce abrasion to the entire used rope length.

The other area I chose was a private limestone sport climbing area on the Pecos River in Texas called Continental Ranch. This area is only open for climbing a few times a year, keeping the routes from getting worn or polished. Water droplets etch the slabby-to-vertical faces into pockets, fissures, and other incredibly sharp features. Again, this area seemed destined to shred skin, cords, and other gear.

Did Aramid Make a Difference?

I don’t have an edge loading testing rig like Edelrid used to compare this rope with its non-Aramid ropes, nor does the UIAA have cut resistance standards. But the Swift Protect Pro Dry 8.9 suffered a lot of abuse in a short time.

The usual scenario at Enchanted Rock was to have a leader put up a route, establish a top rope, then have beginner climbers work the line. This top-roping often produced edge loads on both sides of the rope at the top of the routes and exposed the entire working length of the cord to continuous dragging across sharp crystals. It cycled a lot of abrasion across the sheath in 2 days, exponentially more than usual days at the crag. What it didn’t do much was put leader fall forces on the Swift Protect Pro Dry 8.9.

The rope got leader falls all day for 2 days, with the slack getting yarded up faces with new, hardly trafficked lines with sharp edges everywhere. The short leader falls endlessly stressed the same spot on the rope.

After a total of 4 days of thrashing, my verdict on the Edelrid Swift Protect Pro Dry 8.9 is an unequivocal “yes.” The Aramid does improve cut resistance and overall sheath durability, especially as a sub-9mm single rope.

The waxy feel and stiffness disappeared after the first 2 days, improving the cord’s tactile feel, knotting ability, and packability. After the 2 days at the crystal-strewn granite crag, the sheath did show some fuzziness, but not anything I wouldn’t expect out of any other rope. But careful inspection revealed no other signs of wear.

After the 2 days of lead falls on sharp, water-chiseled limestone features, the rope looked and handled the same. It was a joy to use as a redpoint rope given the small diameter and low weight. And knowing there was Aramid in the sheath and how it performed at the granite crag was confidence-inspiring when taking whips over features that felt laser-etched.

One other attribute of note was, after the repeated short falls on the same section of rope while working crux moves on lead, the cord never got soft in that area, nor did it visibly lose its cylindrical profile. This quality was impressive given the number of falls on such a small-diameter rope.

I didn’t get to test the dry treatment on this rope other than it getting rained on a bit, where it didn’t absorb any noticeable water.

It’s hard for me to say what climber couldn’t benefit from the Edelrid Swift Protect Pro Dry 8.9. Paired with a half rope, it makes it a great quiver of one to the itinerant traveling climber who doesn’t have a plan and wants to climb it all in any style.

As a single rope, the small diameter and resultant low weight make it a great redpoint rope.

And the added cut resistance can deliver peace of mind across the board, from alpine suffer fests to bouldery clip-ups. It was nice to know that I had Aramid in the sheath tipping the scales in my favor. Edelrid’s internal testing showed that this 8.9mm cord had the same cut resistance as a 10mm rope with 176 pounds!

Until something better comes along, the Swift Protect Pro Dry 8.9 is my favorite all-around rope.

Up Next: Upcoming Film ‘The Wall – Climb for Gold’ Documents Climbing’s Olympic Debut