A precise and oh so sticky tool for the difficult and steep, meet the vastly improved Dragon climbing shoe from Five Ten.

Elite sport climbers and boulderers have coveted the original Five Ten Dragon since 2000. Its highly aggressive shape forced the foot into a focused weapon for the hardest redpoint attempts. But it often fell short on the comfort and fit of the heel.

The new version of the Dragon (and Dragon VCS with Velcro closure, both men’s only) launched last fall for $160. These shoes have an aggressive downturn but a less asymmetrical profile than the original, promising improved comfort.

Plus, the heel bears little resemblance to its predecessor, which many found baggy. We’ve been testing a pair for 3 months on steep limestone sport climbs and boulders, at the gym, and on the home training boards.

In short: The Dragon’s aggressive shape and size offer the highest performance on steep terrain but maintain comfort for such a high-caliber rock shoe. Additionally, the Stealth HF outsole has no equal on slippery stone or plastic, making the Dragon and Dragon VCS perfect candidates for limestone and gym climbing. 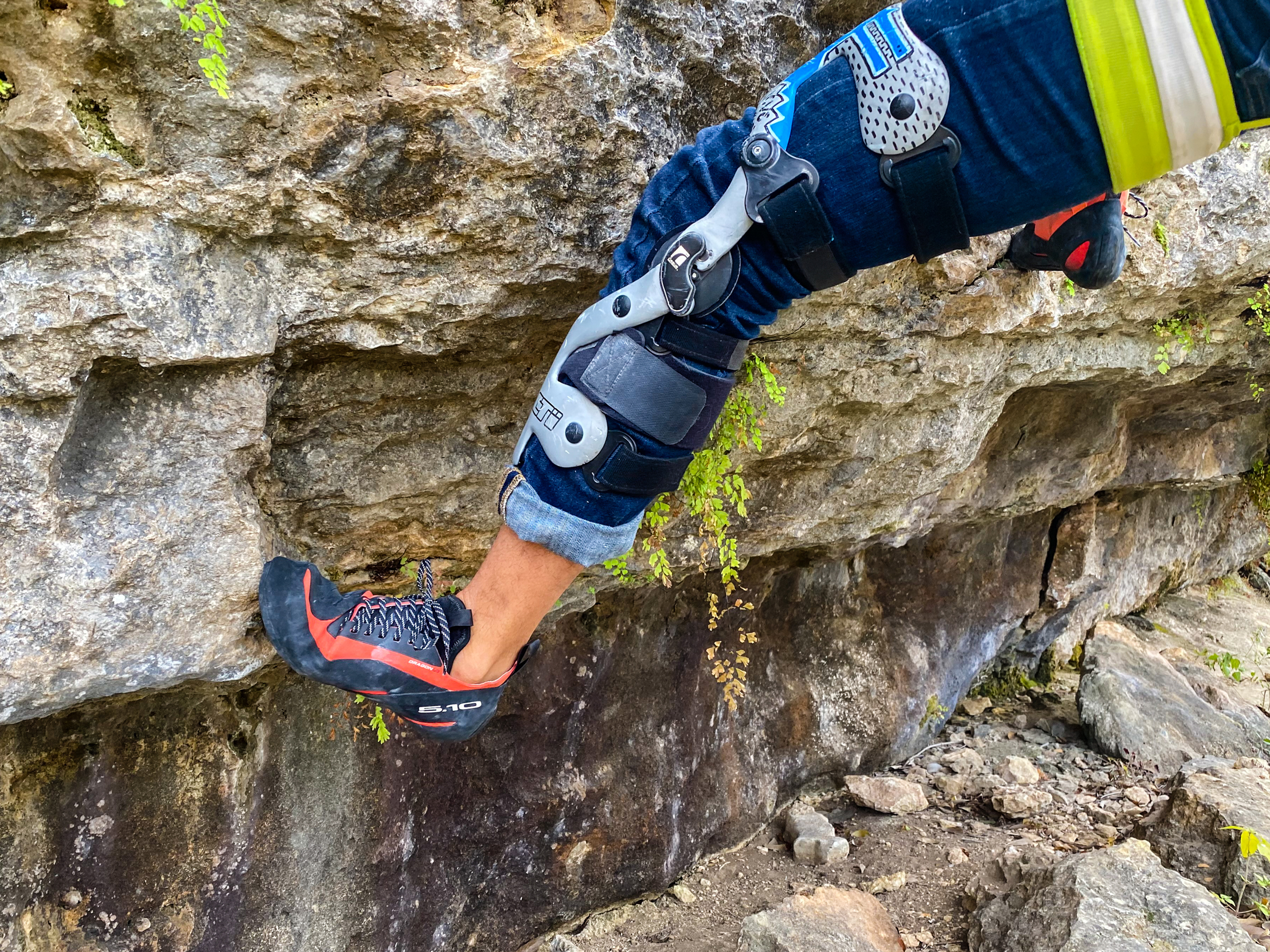 The Dragons have a narrow last but are slightly higher-volume than the old version. I have a classic duck foot: narrow heel, thin profile, and wide forefoot. And these shoes hugged every millimeter of my foot’s surface with even tension. I felt no dead spots or air gaps, even under the arch.

And importantly, I didn’t find any hot spots after long days at the cliff. Gone was the sloppy fit of old — the Dragon’s much-improved and deep heel cup also wrapped my heel. Still, the outside of my forefoot did overhang the outsole, but the margin was insignificant to me.

The shoes’ microfiber upper stretched a tiny bit during the first few sessions, but the fit remained decidedly tight and high-performance. A size 10 fit my size 10 running shoe feet with the tightness that I feel is appropriate for high-end climbing.

I could keep the shoes on for large portions of my training time without wincing — sometimes 20 minutes — before I felt the need to give my feet a break. But I couldn’t leave them on for an entire gym session.

One curious characteristic of the microfiber material was what I dubbed its “memory.” Months into testing, the initial fit of each session was tighter and would loosen into the broken-in fit later.

The downturn felt aggressive, especially at the very front of the shoe, but nothing I considered uncomfortable for sport routes or boulders. And its asymmetry felt similarly apparent, but again, nothing out of the ordinary for a performance shoe.

Over the testing period, the Dragons proved my tool of choice to tackle local limestone boulders and sport routes. The combination of aggressive fit, shape, and the Stealth HF rubber were amazing for routes steeper than about 20 degrees on polished and slippery limestone.

The downturn and asymmetry coerced my feet into efficient pulling tools, enabling me to drag my hips in while using slippery and barely positive features. The toes were pointy enough to do the same on small pockets and made the Dragon one of the best shoes I’ve used to date for shallow divots and depressions.

When climbing through roofs, the generous rubber coverage and softness of the upper, combined with an overall compliance, made toe-hooking and scumming effective. And heel-hooking was adequate on steeper terrain; my heel felt secure within the shoe, and overall it felt a great deal better than in the older Dragons.

The shoes also remain light at 1 pound 0.2 ounces in the lace-up version; 1 pound 0.8 ounces in the VCS (size 10). This low weight reduced the effort of cutting feet and replanting them.

Where the Rubber Meets the Load 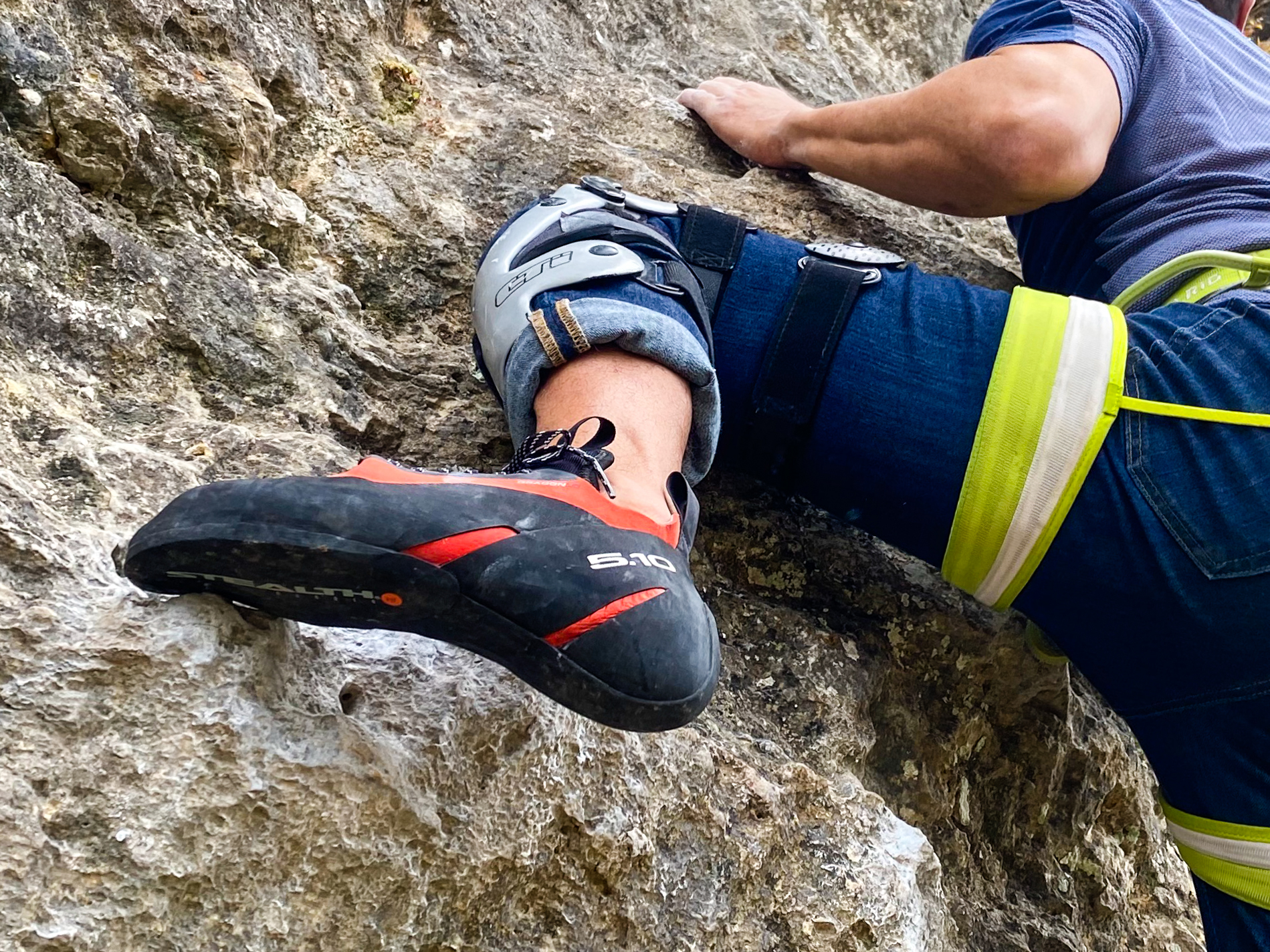 The Dragons currently represent the softest shoes in the Five Ten lineup and proved adequately sensitive for the higher grades. But they are not nearly as soft as some of the recent high-end models from other brands (like SCARPA). So, in comparison, they didn’t relay as much information about minuscule features.

Relative to other Five Ten shoes, the softer midsole and outsole on the Dragon caused the contact patch to roll as the angles eased and the edges shrank. But they still edged better than super-soft shoes from other brands.

I’m not one to split hairs when choosing among the current crop of high-end rubber from many brands. In fact, there are only a few I refuse to use when climbing at my limit.

But the 3.5mm split Stealth HF outsole became my favorite when I knew routes had the least positive features on the most polished stone. The Stealth HF excelled when there was barely any texture. And this grip factor performed the same on plastic, particularly on the newer crop of holds designed to be difficult footholds.

To Lace or Not to Lace?

Five Ten offers the Dragon with asymmetrical laces or with a pair of opposing Velcro straps (the VCS version). I tested both and found I preferred the lace-up version when stakes were high. Although the shoes’ inherent tight fit supplied much of the desired foot compression and sensitivity, the lacing system allowed me to increase both when desired. I could dial in the exact tension I wanted for every part of my foot with the laces.

By contrast, the Dragon VCS was much more convenient during training or repeated burns on problems or routes I had wired, but I couldn’t match the super-connected feeling I felt with the laces. And although it wasn’t an issue for me, the metal buckle on the VCS produces a pressure point with certain foot positions for some.

As long as the fit of the Five Ten Dragon and Dragon VCS agrees with you, the shoes are a top choice on steep routes and boulders for more seasoned climbers. And the Stealth HF rubber will be hard to beat on slippery stone.

Make no mistake — these are not a one-shoe quiver; they are focused tools for more difficult climbing. When belaying requires looking backward and nonexistent texture is the primary subject at hand, the Five Ten Dragon and Dragon VCS are both willing and able.

Up Next: A Climber’s Dream: Send a Project in Your Sleep

Saving…
A Climber’s Dream: Send a Project in Your Sleep
‘Dirtbag’ Training Session? How to Merge Climbing and Fitness at Home
×