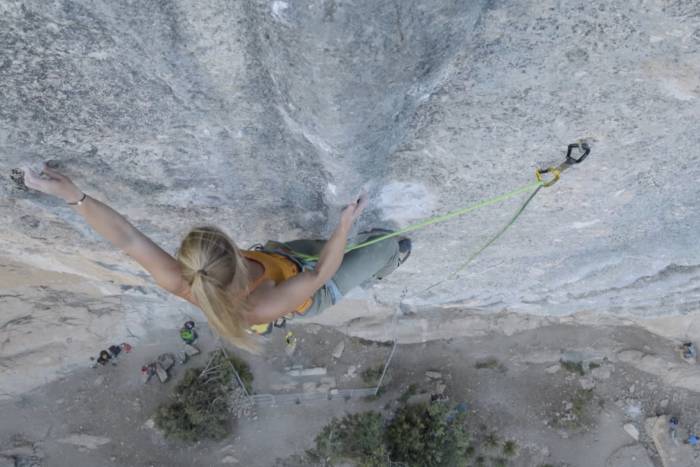 Ask climbers to name a jack of all climbing trades, and their answers will probably be fast and reasonably predictable: Alex Honnold, Adam Ondra, Tommy Caldwell, etc. But what about the women?

Findlay sits comfortably at the top of that field. Since the late ’00s, she’s built a reputation for putting up bleeding-edge first ascents, bagging head points on terrifyingly hard-to-protect gritstone, and firing immense adventure routes.

But on March 9, 2022, the U.K. native added a sport climbing milestone to her list of bold achievements. She became the second British female to break the 5.14d/9a threshold by sending “Esclatamasters” in Perles, Spain.

Findlay began projecting the route back in November 2021, left for a few months, then returned this season, ready for the redpoint. “Esclatamasters” is, according to James Pearson, a stamina test. And considering his place in the upper echelon of climbers that can stick the grade, that’s saying something.

In a show of experiential wisdom, Findlay shared her psychological insights following the send.

“Like most sport projects, in the end, it came down to two things, recruiting the fitness and managing the mind,” she wrote.

“I really focused on having a positive mindset. I didn’t succeed every day, and it was difficult at the start of the trip when we weren’t climbing well … I knew that if fear of failure showed up too strong I’d struggle to do that part so tired. But I really focused on being connected to my experience, and honestly, the whole climb felt pretty joyful.”

She and her compatriot, Emma Twyford, are the only two women from the U.K. with 5.14d sends. They share a similar distinction in trad climbing, too — Findlay broke the 5.13d/E9 trad barrier in 2011 aboard the U.K.’s “Once Upon A Time In The Southwest.” Twyford followed suit in 2013 with “Rare Lichen” in Wales.

Findlay’s continued to notch even harder trad lines recently, and in late 2019 redpointed the 100-foot Yosemite splitter, “Magic Line,” 5.14c/E11, placing all of the gear on her send-go.

Regardless of location, rock quality, or style, she has freed some of the most renowned routes in the world, including four mega lines on El Cap —”Golden Gate,” “Pre-Muir,” “Freerider,” and “Salathé Wall,” and a high-alpine FA on Mont Blanc’s Aiguille de Saussure spire. She also crushes Indian Creek offwidth and, given her competition background, can probably wrestle pebbles with the best of them.

When she isn’t plugging gear or taming limestone, Findlay’s a mental training coach for climbers and co-host of “The Curious Climber Podcast.”

Learn more about the well-rounded ascensionist, her podcast, coaching biz, and many sick, sick sends at hazel-findlay.com and by following @hazel_findlay on the ‘gram. 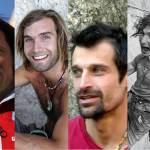 Climbing Controversy: Behind the Decades-Long Conflict Roiling the Sport’s Elite

Clashes over climbing grades are as old as the sport itself. From Fred Rouhling to Adam Ondra, climbing has both vilified and lionized its icons. But why? Read more…