Get the scoop on rock climbing difficulty grades and safety ratings here: what they are, what they mean, and why they’re important.

Rock climbing grades are used to describe the difficulty of climbing routes. Grades are used in rock climbing gyms and outdoors at the crag. Before starting up a route, it can be helpful to be aware of the route’s grade, which is determined by the consensus of those who have climbed the route.

Grades can be a helpful framework for measuring your own climbing progression as you acquire new strengths, skills, and techniques.

Bouldering, which is a form of climbing that takes place on freestanding boulders and shorter rock faces that don’t require a rope for safety, has a different grading system than longer climbing routes that are climbed with a rope.

Climbers also use protection and safety ratings to describe routes and warn each other of hazards.

Read on for a breakdown of climbing complicated rating systems for difficulty and safety.

In America, we use two primary grading systems to rate the difficulty of rock climbs. Let’s start with the grading system for roped climbing, known as the Yosemite Decimal System (YDS). The YDS was developed by members of the Sierra Club in the 1950s in Yosemite Valley and other North American climbing areas.

There are five “classes” in the YDS. Classes 1 and 2 are used to describe walking and hiking terrain. Classes 3 and 4 describe steeper, more technical terrain that is often exposed and requires some rock scrambling and the use of all four limbs on the ground to ascend safely.

Think of classes 1 and 2 as a walk in the woods, and classes 3 and 4 as a technical hike or steep mountain ridgeline. Climbers typically refer to classes 1 through 4 as “first, second, third, and fourth.” 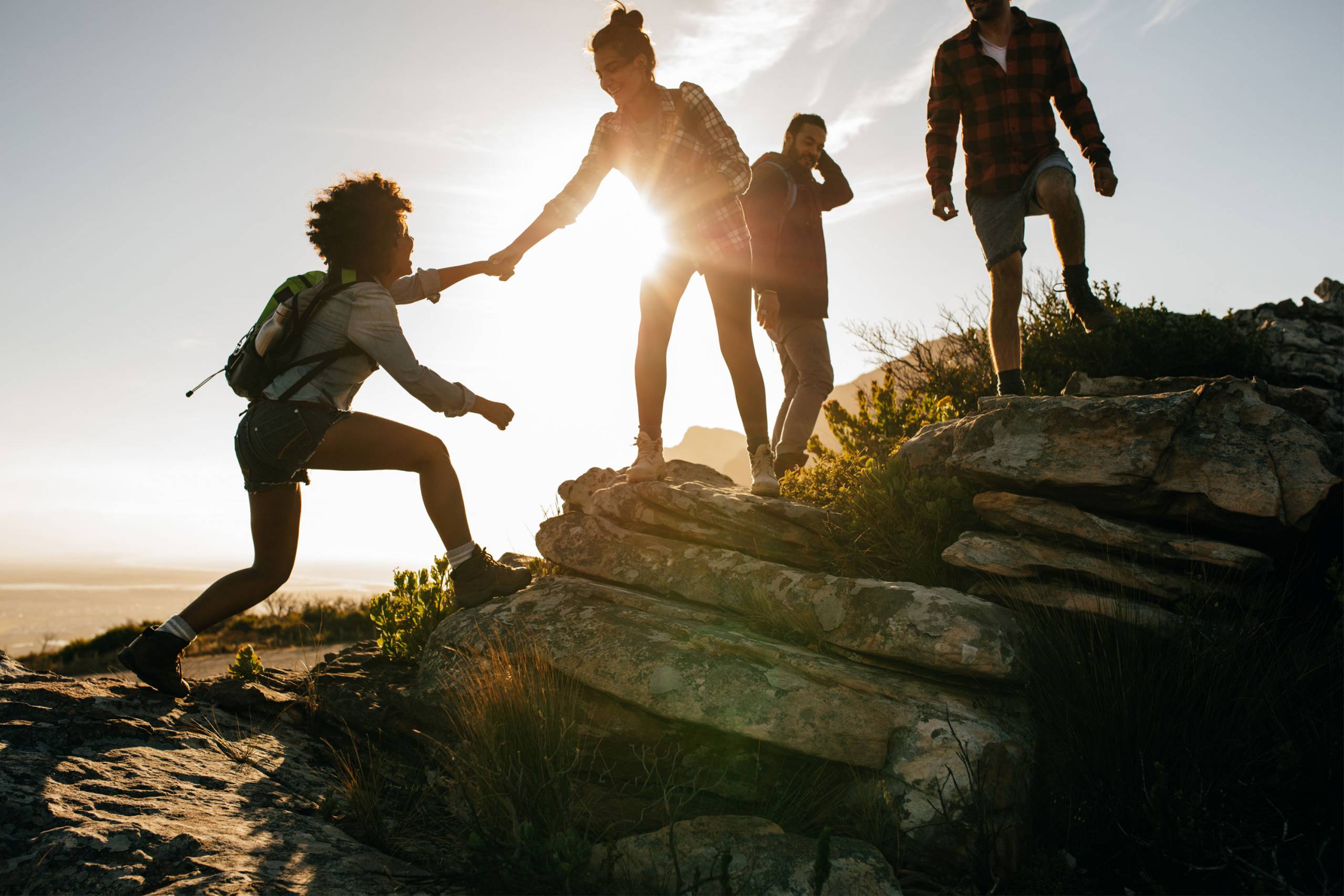 Class 5, or fifth class, covers technical rock climbing. This one is subdivided into parts, which currently range from 5.0 to 5.15. Early proponents of the system added the decimal to break up the fifth class into minute, incremental ratings that allow climbers to describe a route’s difficulty with a high degree of accuracy.

Low fifth class, from 5.0 to 5.5, is considered to be easy terrain by most climbers. After the scale reaches 5.9, letters are used to further subdivide each numerical grade. The 5.10 grade is divided into 5.10a, 5.10b, 5.10c, and 5.10d — which is then followed by 5.11a. Currently, the most difficult climbing routes in the world are graded 5.15d, and only two routes of this grade currently exist.

The YDS is used by most climbing gyms in North America and other regions where the YDS is preferred. In these areas, any roped form of rock climbing, from bolt-protected sport climbing to removable gear-protected traditional climbing, will be rated using the Yosemite Decimal System.

A route that is graded according to the YDS and incorporates all of its various parts may appear written like this: Flight of the Albatross, 5.10c A4 PG-13 Grade VI. 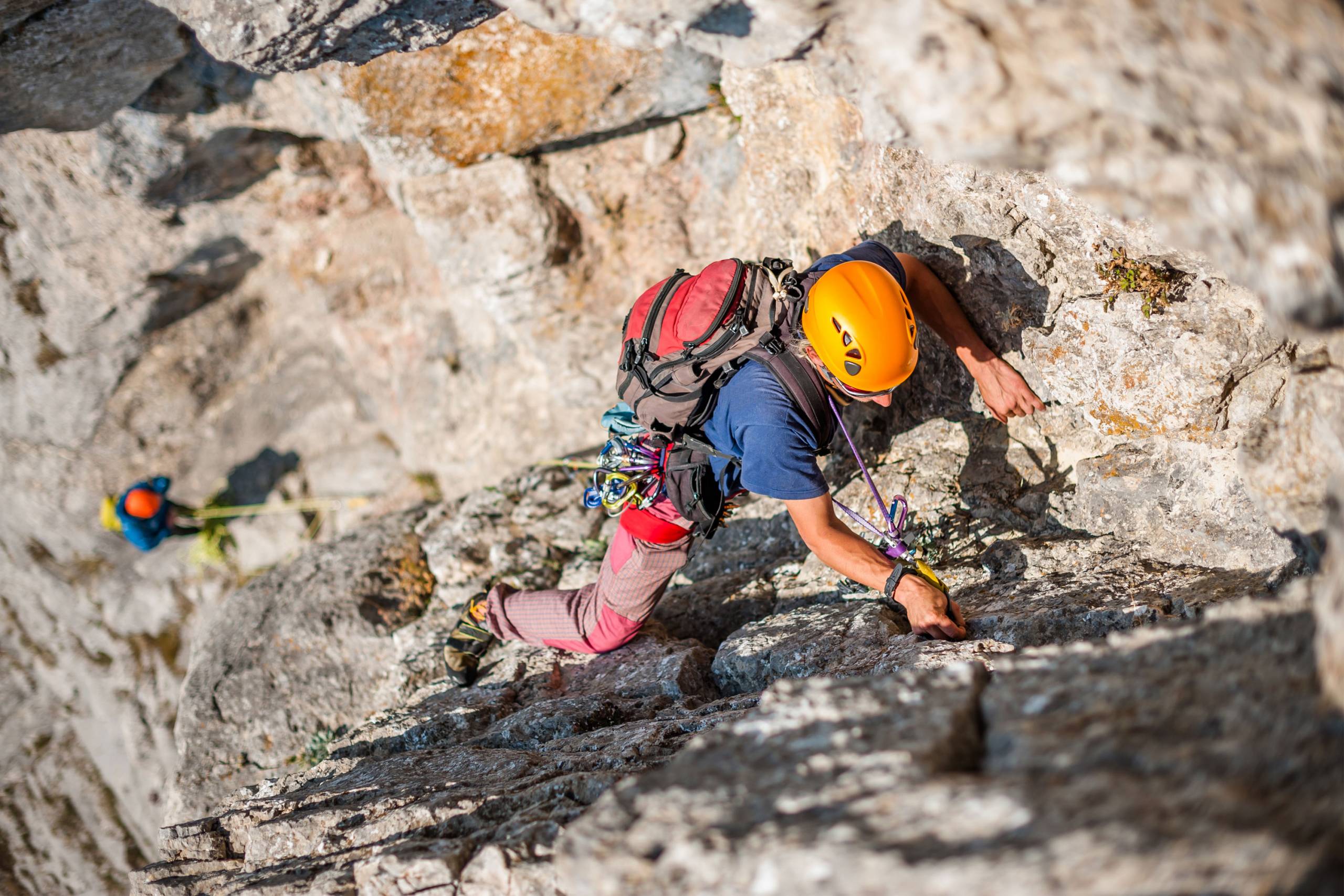 The YDS also includes an aid climbing rating system that describes the difficult and safety levels of routes that can be climbed by placing gear in the wall and pulling on it to make progress on the route.

These Roman numerals are more relevant to big-wall climbing and mountaineering and are not often included when describing short rock climbs.

Another optional rating indicates the quality and spacing of a route’s available protection for a competent climber. Amusingly, the letter codes associated with the different protection ratings are based on the American system for movie ratings:

A little historical side note: In the early days of the YDS, many climbers assumed that climbing beyond 5.9 would be humanly impossible. Royal Robbins climbed the first confirmed 5.9 in 1952 when he completed Open Book at Tahquitz Rock, Calif.

As training methods and climbing gear have developed over the interceding decades, the climbing grade ceiling continues to rise. Adam Ondra established the world’s first 5.15d, Silence, in 2017. And in 2020, the world’s second route of this difficulty, Bibliographie, was climbed by German phenom Alex Megos. 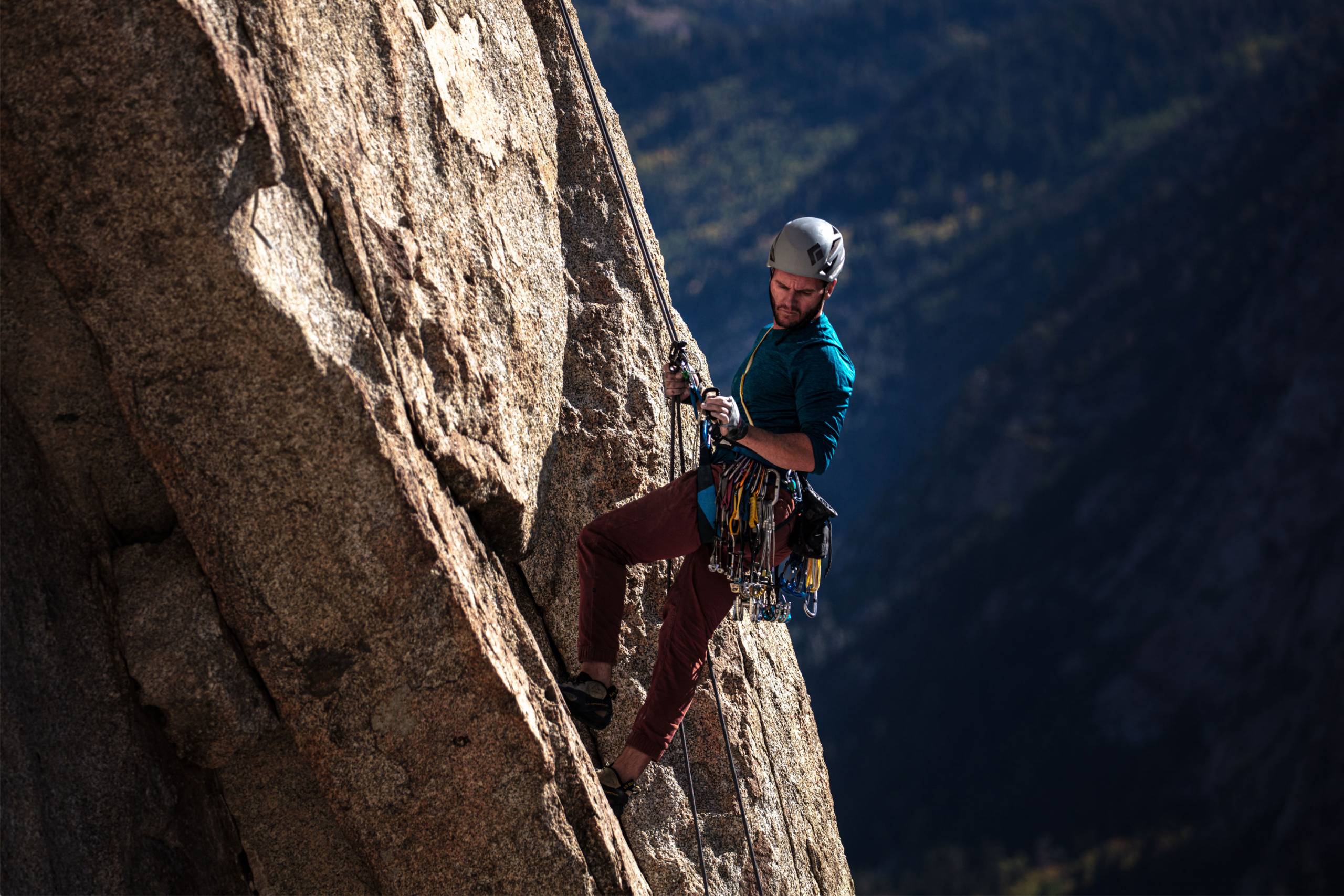 Bouldering and the V Scale

What Is the V Scale?

While the YDS is used to grade pretty much every roped rock climbing route in America and beyond, bouldering utilizes a completely different system. Like grades for roped climbing routes, bouldering grades indicate the difficulty of a boulder problem to a climber who has never tried it before.

The “V” in V scale is short for “Vermin” or “Verm,” which is the nickname of iconic boulderer John Sherman, credited with creating the V scale. Sherman spent time bouldering in Hueco Tanks, Texas, in the 1980s and decided there should be a consistent scale for measuring the difficulty of boulder problems.

After a climbing guidebook publisher refused to publish Sherman’s guide to Hueco Tanks unless a grading system was added, Sherman spent time formalizing his scale and grading the boulders in his book.

Boulder problems in America are graded using the V scale. Like the YDS, the V scale is completely open-ended, and the highest grade on the scale will continue to increase as the sport progresses. Currently, the scale starts at V0 and goes up to V17.

Sometimes, VB is used to describe beginner-level boulder problems that are easier than V0. Generally, problems between VB and V3 are considered beginner-level, V3 to V6 is considered intermediate, V7 to V10 is advanced, and V11 and beyond is very difficult or elite. The V scale is commonly utilized in climbing gyms.

A Note on Bouldering Grades

The grade of a boulder problem considers the entire experience of climbing the boulder. Individual movements from one hold to the next are sometimes given a grade themselves, but the accumulation of all of the moves adds up to the final grade of the entire boulder problem.

For example, a boulder problem with 10 V5 moves in a row without rest will probably be rated a higher grade than V5. This is because a series of moves of a given grade is more difficult to complete than a single move of the same grade.

A V10 boulder problem could include a bunch of easy moves leading to a single V10 move, or it could be a sequence of lesser moves that overall requires a V10 effort to link together. For example, existing V13 boulder problems have been described as “multiple V10s in a row.” After the first ascensionist climbs a boulder and recommends a certain grade, other climbers come along and offer their own opinions until, eventually, there is a consensus. 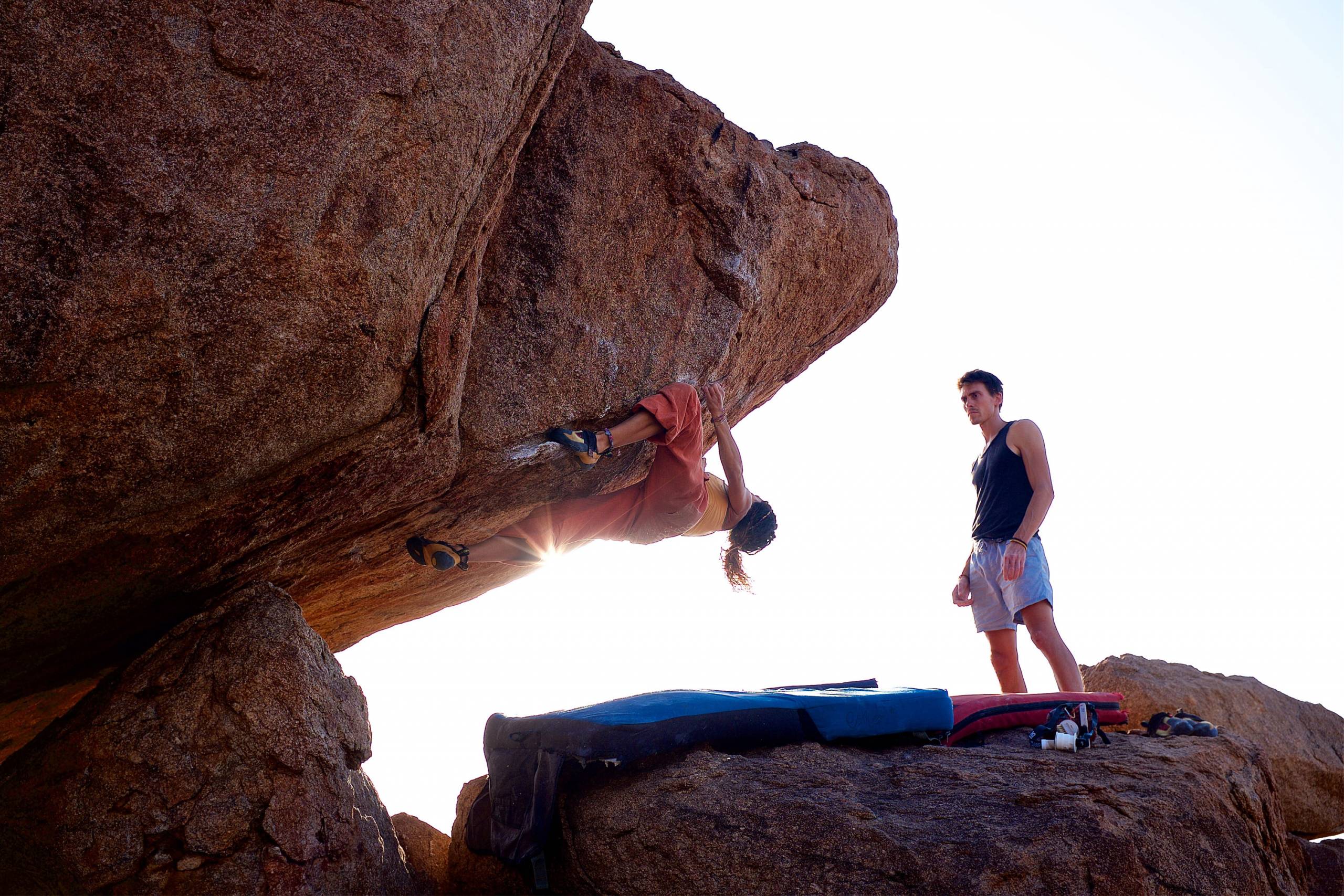 Because different climbers have different strengths, weaknesses, body types, and skill sets, all climbing grades are subjective. Climbers often disagree on the difficulty or grade of a given route. As mentioned above in the context of bouldering, climber difficulty ratings are based on consensus.

Outside of the U.S., several other grading systems are commonly used. The French grading scale begins at 1 and currently goes up to 9, utilizing lettered increments in between. Climbing grade conversion between the French scale and the YDS is simple and straightforward. Most roped routes in Europe and beyond are graded using the French system.

The Fontainebleau scale, which also originated in France, is widely used to grade boulders. It can be easily converted to the V scale.

Other examples include an Australian roped climbing grade scale, which simply runs from 1 to 39 and doesn’t utilize lettered increments at all. A U.K. grading system for roped routes — meant for traditional climbs specifically — considers the boldness factor of each route.

Rock Climbing Unraveled: The Gear You Need to Get Started

Rock climbing is booming right now, and why not? It's great exercise, fun, and social. Here's the beginner rock climbing gear you need to get started. Read more…

The Best Bouldering Crash Pads of 2022

The object of the game is simple. Climb to the top — no rope required. Keep it safe and fun with our review of the best bouldering crash pads. Read more…