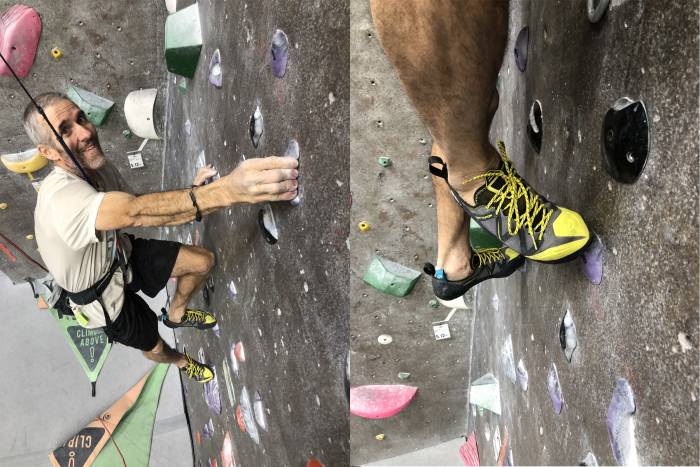 The latest and third iteration of the SCARPA Vapor returns the lace-up to its roots, with a leather upper and footbed to bring more stretch, give, and comfort to one of the stiffest, most precise shoes in SCARPA’s line.

Everything else remains unchanged from version 2.0, securing the Vapor as one of the best technical/trad/multipitch shoes on the market, especially given its low profile and light weight (16.2 ounces per pair, size 40).

A Shoe With History

The Vapor lace first appeared in 2009 as a family of shoes with the Velcro version and a slipper. The whole idea of a rock-shoe family was relatively novel. Other than the 5.10 Anasazi lace and Velcro and Moccasym, nobody else seemed to be doing it.

The idea was that multiple shoes, with varying closures, stiffness, and even outsole compounds, would spawn off the same last. If one shoe fit, they likely all did.

I never fit well into the OG Vapors — any of the models; they pinched down in the toebox and heel, so I went with the Instincts (released at the same time). But when the second iteration of the Vapor lace came out in 2020, I became a convert.

The shoes had a more forgiving, ergonomic fit, and the chiseled toe was so pointy and precise that the Vapors felt nearly unstoppable on granite micro-edging — especially for how airy they are versus your typical beast-mode edging shoes. I picked my foot up and toed in with precision, quickly, which is key on thin, technical climbs where the clock is ticking. SCARPA also chose a synthetic upper.

The Vapor 2.0 was a stiff, subtly asymmetrical, barely downturned shoe that never buckled, even on horrendous micro-crimps and tiny divots like those on the vert 5.13b slab Die Reeperbahn in Boulder Canyon, Colo. The pared-down Pressure Absorbing Fit (PAF) heel essentially “splits” the tension rand to avoid overloading the Achilles tendon. It let me size down a half size over the old version for maximum precision.

I was then curious to see what version 3.0 did differently, coming only 2 years on the heels of version 2.0.

Changes for the SCARPA Vapor Lace-Up 3.0 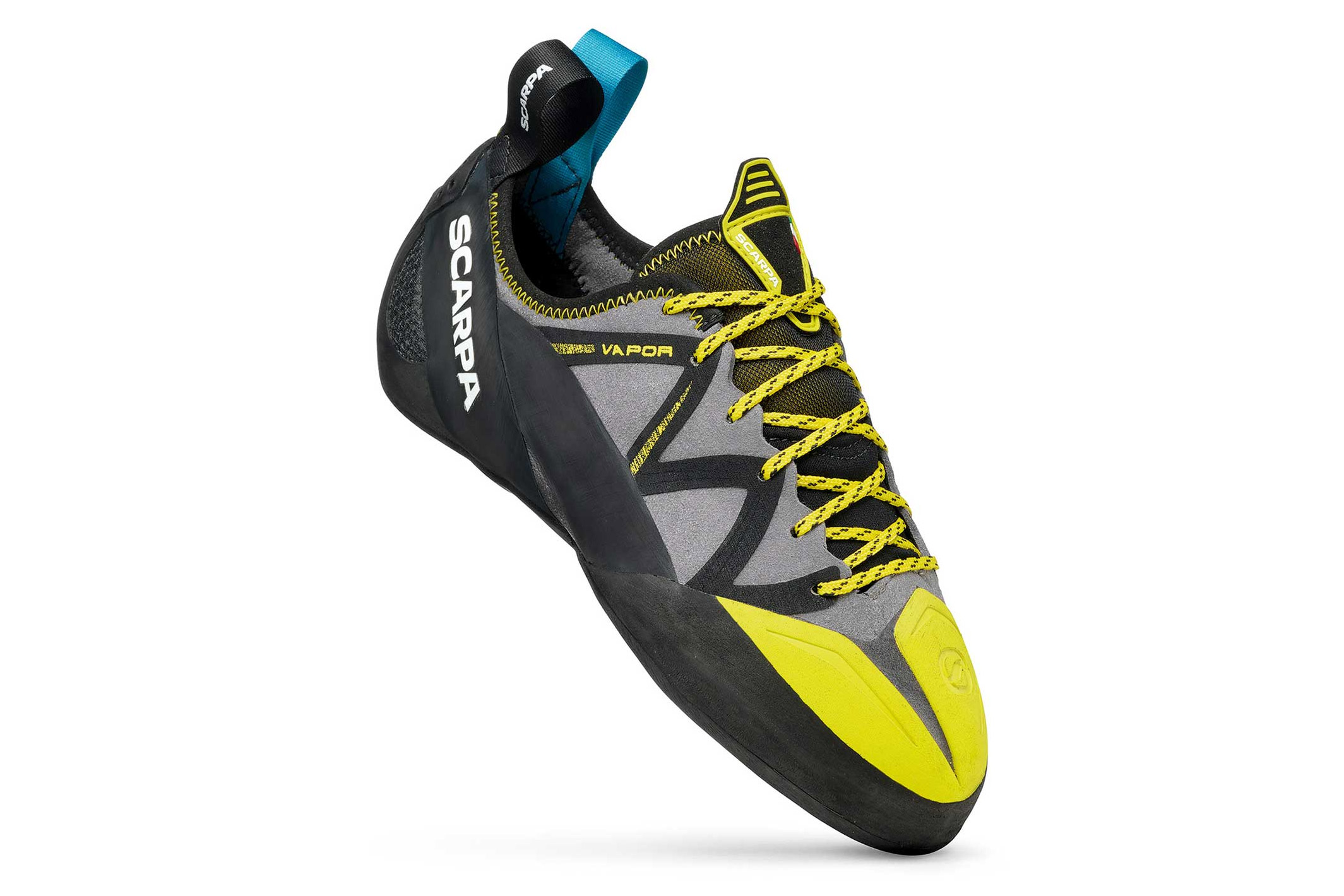 The main change is that the upper has returned to leather, with TPU overlays covering the stitching so you don’t pinch along the seams in cracks. Also, the interior footbed is now leather for a squishier fit.

Otherwise, everything else is pretty much the same. There’s a 1.4mm midsole; that PAF heel; a full-length lacing system; the yellow rubber D2 toecap, which merges SCARPA’s M50 and M70 rubber compounds for toe scumming and jamming protection; a pillowy mesh tongue; and a full-length 3.5mm Vibram XS Edge outsole. The shoes also have a new, more muted color scheme.

What Does It All Mean?

I primarily tested the SCARPA Vapor Lace-Up on vertical, granitic rock, from multipitch climbs on steep gneiss at Empire, Colo., to thin-edge face climbs in Boulder Canyon, Colo. to a slightly overhanging iron-rock crimp wall near Estes Park. A friend I was climbing with happened to have a couple of pairs he’d bought, too, so I picked his brain.

Honestly, it was hard to tell a performance difference between the Vapors 2.0 and the newest ones other than a slightly more forgiving fit. Both have the same precise, pointy toebox, but the newer version had subjectively fewer hotspots around the instep and less fore-to-aft pinching. This meant I could keep them on longer.

At the same size as before — 41 — I did the four-pitch Dharma Punks on Eagle Rock, Boulder Canyon. I only took them off once while belaying the final rope length up on a huge ledge. As with the previous Vapors, I was wowed by their precision and how well they bit into holds down to the smallest nothings — little granite creases and bumps I wouldn’t dare try in most rock shoes.

On the vertical 5.11+ crux pitch of Dharma Punks, I marched up its ladder of credit-card edges without a second thought. I felt stable and locked in on the high steps and tenuous clipping stances. The flip side of all that rigidity is that:

You’re often better off not smearing and just finding some micro to stand on, as I noted on the slippery gneiss at Empire. Downsloping ramps had me wishing for a softer, stickier shoe. That said, on a gently overhanging rock, I could dig hard into crimps, driving down through the pointy toe for secure precision and remarkable stability.

So, if you haven’t figured it out by now, the Vapors are best viewed as edging shoes. And yet …

Getting High on Cracks

The SCARPA Vapor Lace-Up is also designed for crack climbing, in particular cracks from baggy fingers to hands (the low cut isn’t great for fist cracks and offwidths). They performed at their best in those semi-thin and middle ranges. In the ultra-thin sizes, the toebox had a little too much vertical rise to stuff into the tightest tapers. Although these cracks would likely only work with slippers or very pointy shoes like the Katana Lace anyway.

I’ve always found the Vapors to be stiff out of the box, and initial forays into jamming involved some painful pinching. However, once they softened up, they had more room across the top of the foot. I could then can torque away, slotting deep into hand jams.

The upper over the toebox comprises an interesting idea, one Scarpa used on their 2019 version of the shoes. It’s something they’re calling D2 rubber, which merges their proprietary M50 rubber (their softest compound—the black rubber) and M70 rubber (the stiffer yellow rubber). Sarpa claims that this provides rand protection for jamming and a seamless toe patch for scumming.

In the flaring, Boulder canyon granite pods I stuffed these into, what D2 meant performance-wise was good grip and minimal pain (after break-in; see above), which came in handy on the weird, laybacky, twin-crack 5.11c opening pitch of Dharma Punks. On a lark, on the way home from the crag that day, I stopped in at the gym. I auto-belayed on some semi-steep stuff, namely an undercut sweep of a wall where they always set bouldery starts that require new-school footwork.

Yes, the Vapor Laces were stiff and slippery atop the big blob footholds. But I could also get them to drag (scum) well underneath when needed, as with a fussy bicycle move to start a 5.13-. In that sense, all that stiffness came in handy. I could dorsiflex like hell against the underside of a hold, and the shoes locked in and did a lot of the work.  It was a very savvy blend of trad and sport flair.

The SCARPA Vapor Lace-Up shares a niche with shoes like La Sportiva’s Katana Lace and TC Pro, and the Five Ten NIAD Lace.  But it offers a thin, 3.5mm sole and a slightly softer, more sensitive feel — for the genre.

They are an amazingly light, breathable edging shoe with solid crossover into midsize jamming and slightly overhanging rock, both sport and trad. They were ideal for almost all granite venues, as well as sandstone face-and-crack areas like Eldorado Canyon, Colo.

I’ve tended to favor them for middling-hard to hard multipitch climbs, but they are a great cragging boot too. Especially for climbers who like their shoes to flirt with an old-school, full-foot supportive feel but also have a dash of flair and downturn for technical sport climbing. 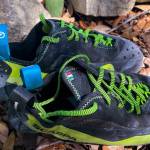 SCARPA Mago: Version 3.0 Is Sleek, Stable, and Ready to Shred the Steeps

The first SCARPA Mago was launched in 2007. The third version continues to perform at the highest levels, especially on the steeps. Read more…