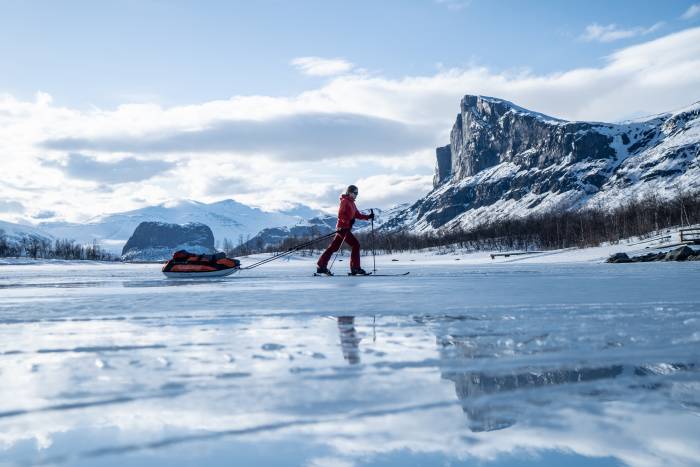 Self-sufficient (i.e., human-powered) ski tours have been done. But how about a ski tour expedition across the Arctic Circle?

Imagine traveling to a place as remote as the Arctic Circle, only accessible by foot or ski, and getting the chance to climb some new routes and peaks while you’re there. Then imagine jumping off them. That’s the premise of Polish athlete Ewa Kalisiewicz’s latest expedition with two teammates.

I’m just guessing, but the Venn diagram of people who are expert enough to ski, mountaineer, climb, BASE jump (pilot a wingsuit), and navigate the backcountry has got to be slim. But we know there’s at least one person who fits the description.

GearJunkie chatted with Kalisiewicz before and after her expedition to learn all about her life, her trip, and her goals while up there.

Climbing, Skiing, and BASE Jumping the Arctic Circle

“Our aim for this expedition is to complete a ski touring and BASE jumping expedition in Sweden’s Sarek National Park. We will set up a base camp in the heart of the park and use this to explore the local area for BASE jumps, ski mountaineering, and climbing local cliffs and peaks,” Kalisiewicz told us before departing. Her group of three comprises herself, her husband, and a photographer.

But first, they’ve gotta get there. Kalisiewicz shared that the tour-in from the dropoff point takes about 2 days. Once in the Rapa Valley, the peaks of the Arctic Circle become their oyster, so to speak.

“We will be completely self-sufficient: carrying in all our food for the duration and melting water for cooking and drinking. We have made some pulk sleds to haul our gear behind us when ski touring,” Kalisiewicz added.

What could make this trip cooler? “We hope to see the northern lights above us during this trip, hopefully during one of these activities,” Kalisiewicz told us. Yes, that would do it.

One question we had: What special skills does a BASE jumping trip like this require?

Well, Kalisiewicz has 1,500 skydives and 800 BASE jumps under her belt. Being able to pilot a canopy and the wingsuit is obviously a necessity. But the most important skill might be risk assessment.

Mostly, the trip lined up with expectations.

Kalisiewicz and her team successfully completed the self-sufficient ski touring expedition in Sarek, which started with a 65-plus-km ski-tour approach, completed in 2 days. They arrived and set up a base camp in the Rapa Valley, the heart of the park.

Upon her return, Kalisiewicz told us:

We’ve completed the key objective of scrambling the Skierfe cliff [1,179 m high] and jumping off of it. What could have been a relatively easy climb in the summertime presented quite some challenges when summitting it in winter conditions — deep snow with not enough top crust to hold the bodyweight resulted in a troublesome approach.

After long morning hours of gaining altitude, we’d been challenged with a cloud covering the peak of the mountain [preventing us from jumping]. Once it passed, the strong wind conditions made us wait further for a weather window. It was a waiting game, as it sometimes is.

But eventually, the opportunity presented itself. Kalisiewicz jumped first, followed by Tim Howell, who made a wingsuit flight.

“We both landed on the frozen lake below and completed the passage back to the base camp – equally challenging as the approach uphill,” Kalisiewicz wrote. “I am happy to say we’re among very few people that ever performed a BASE jump off this cliff, and most likely Tim was the first person ever to jump it in a wingsuit.”

More on Ewa Kalisiewicz and Her Big Ambitions

Ewa Kalisiewicz is a Polish athlete currently based in Switzerland. She’s an alpinist, backcountry skier, and BASE jumper. She’s an international airline worker by day and a wingsuit pilot during her free time. Kalisiewicz is also a climber, mountaineer, and skier and has climbed peaks like the Aiguille du Moine on the Mont Blanc massif.

Her long-term goal? She aims to combine three of her favorite mountain sports in various destinations around the world. And this one in the Arctic Circle above Sweden is just the beginning. 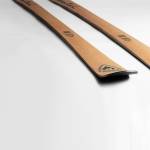 Lots of brands throw around the word 'sustainable' and 'recycled.' And brands in the ski industry are no exception. However, Rossignol today is backing up a pretty bold claim. Read more… 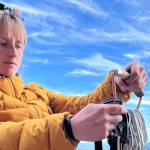 Save Time, Climb More: 'Love Handle' Is a Marvel for Organizing Climbing Gear

Climbing is a gear-intensive activity, and keeping track of all of the requisite knickknacks is a perpetual chore. Enter The Love Handle — a product designed specifically for organizing climbing gear and improving efficiency at the cliff. Read more…