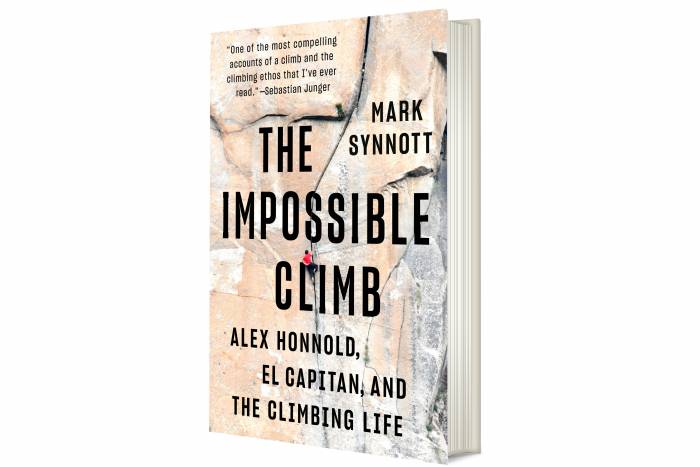 Want to know the secrets behind Alex Honnold’s free solo of El Cap? Or what happened behind the scenes during ‘The Dawn Wall’ or the Golden Age of climbing? A new book, ‘The Impossible Climb’ by Mark Synnott, tells all.

I’m pretty sick of “Free Solo” film coverage at this point. Alex Honnold’s impressive climb of El Cap has been covered to eternity. Between the climb itself, the speaker series, the film tour, and now the Oscar win, it’s been in the media spotlight for the better part of 3 years. 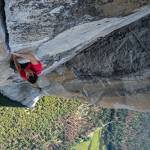 Alex Honnold is the most interesting man in the world, and the movie Free Solo proves it. We spoke with Jimmy Chin and E. Chai Vasarhelyi for insider takes about what it took to film Free Solo. Read more…

I don’t mean to undermine his climb, which will undoubtedly go down as one of the greatest feats in sport. But when I heard about a new book that tells the back story of “Free Solo,” I thought, “Good grief, I’ve had enough!”

However, once I started reading “The Impossible Climb” by Mark Synnott, I couldn’t put it down. It held my attention page after page. Before I knew it, I’d finished the book.

Released in March, “The Impossible Climb” is not just an in-depth look at Honnold and his death-defying climbing accomplishments. It offers a behind-the-scenes history of the modern climbing era as we know it. Synnott doesn’t hold back with the truth or gossip of some of climbing’s biggest moments.

“Mark Synnott’s ‘The Impossible Climb’ is to climbing what William Finnegan’s ‘Barbarian Days’ is to surfing,” wrote John Long, founder of the Stonemasters. High praise indeed.

Note: This article contains minor spoilers of the book. If you’re already hooked, buy it here.

Synnott may not be on everyone’s climbing radar. But the professional climber and celebrated journalist has put up cutting edge first ascents and climbed among the greats during his 30 years on The North Face’s athlete team.

It’s this experience that Synnott teases out in “The Impossible Climb.”

Synnott tells the story of Honnold’s free solo of El Cap and everything Honnold did to get to that point. And beyond Honnold, Synnott goes deep into climbing’s roots for this thorough, well-written book.

“The Impossible Climb” starts out with Synnott’s early years with The North Face. He first made a name for himself by exploring the east coast of Baffin Island. There, he established numerous big-wall first ascents, including the 4,700-foot Polar Sun Spire. For that ascent, he needed to spend 36 nights on the wall in portaledges.

Synnott’s accomplishments are impressive, but for a book with Alex Honnold on the cover, it’s just not what I was expecting. I was caught off guard when Synnott went into his personal climbing history.

But after a few dozen pages, I was OK with reading about Synnott’s climbing escapades. It was then I realized how much more expansive this book was than one historic climb.

Synnott certainly covers Honnold’s climb in depth, but to build up to this accomplishment, Synnott goes way back.

He tells history about El Cap and climbing in Yosemite. He gives a behind-the-scenes look at what Royal Robbins was like in the valley. And Synnott details what really happened when Tommy Caldwell and Kevin Jorgeson finally topped out on the Dawn Wall after 19 days on the wall. But that’s just to name a few of the book’s chapters.

And throughout Synnott’s retelling, he provides plenty of first-person accounts.

During his time on The North Face’s team, he’s climbed alongside Alex Lowe, Conrad Anker, Jimmy Chin, Alex Honnold, and many more famous climbers. It was fascinating to hear about how these climbers behaved in camp on expeditions. Or what happened when first ascents went south in remote locations.

Between the history, Synnott’s own experience, and the first free solo on El Cap, “The Impossible Climb” is a very well-rounded look at climbing’s landmark accomplishments and the culture that surrounds the sport.

Synnott’s climbing context makes “The Impossible Climb” such a pageturner. I felt like I was learning secrets about climbing’s greatest accomplishments.

In summary, “The Impossible Climb” is a great book. It’s insightful, thorough, and entertaining. Just don’t expect it to be solely about free soloing El Cap.

“The Impossible Climb” is Synnott’s second book. It’s available on Amazon for $17. If you enjoy reading about the inside scoop on climbing or want to read about one of the greatest physical achievements ever — in climbing and all sports — I suggest you pick up a copy today.