The film tells the story of Polish mountaineers Maciej Berbeka and Tomasz Kowalski, who went missing while descending Broad Peak in Pakistan.

On March 6, 2013, climbers Maciej Berbeka and Tomasz Kowalski vanished after making a pioneering winter ascent of Broad Peak in the Karakoram region of Pakistan. Officials declared them dead 2 days later. Now, a new film from Netflix is telling the story.

Berbeka was a groundbreaking mountaineer before disappearing, with several winter first ascents to his name.

According to Explorersweb, the film’s crew spent a month making the film in the unforgiving conditions of northern Pakistan, shooting much of it above 18,000 feet.

Check out the trailer and get ready for “Broad Peak,” coming to the streaming platform on Sept. 14. 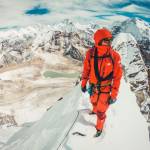 We Just Tried TNF's Most 'Advanced Mountaineering Kit' Yet

The North Face introduced the Advanced Mountaineering Kit at the Outdoor Retailer show last month, and it blew our minds. We got a first look at this pinnacle equipment package on a ski tour near Aspen, Colorado. Read more…