It can take more than a decade to get a permit for a private rafting trip through the Grand Canyon, so when a friend’s family offered my wife and I two spots on their 16-person trip, we immediately requested time off from work and booked our flights. 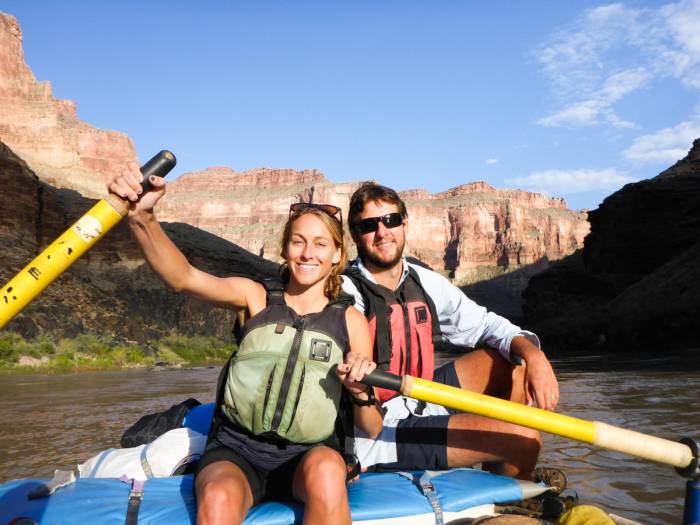 Over the next month, we read up on the river and prepared our gear, but by the first night camping on a sandy Canyon beach, we learned that there’s no way to fully know how to pack for the Colorado until you’ve spent time on the water.

Even When It’s Hot, It’s Cold (and when cool, still hot)

Our trip departed in August, which meant heat indexes well over 100 degrees during the day, and plenty of direct overhead sun. But because the river’s water is released from the bottom of Lake Powell, it flows out at a consistent, chilly 47 degrees. That means that if you plan to paddleboard or kayak, you’ll be most comfortable in a neoprene top, even though the air is sweltering. It doesn’t take long to get hypothermia in 47-degree water! 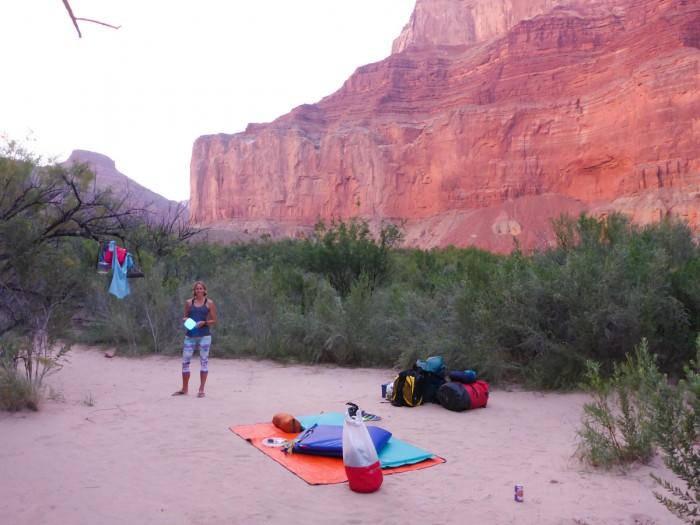 Likewise, we over-packed for the evenings, expecting chilly desert nights. Instead, even the wind whipping through the canyon felt hot at night, so the choicest sleeping was on the boat over the cool water, or outside on the beach. Inside a tent was way too hot! But…

Bark scorpions are abundant in the Grand Canyon, and their translucent white bodies can make them hard to spot. They are ambush hunters, so they hang out underneath driftwood and wrack on the beach. If it’s hot and you’re sleeping outside of your tent, you’re likely lying directly in their path. Although they’re not usually lethal to humans, their sting hurts like an amplified bee sting. 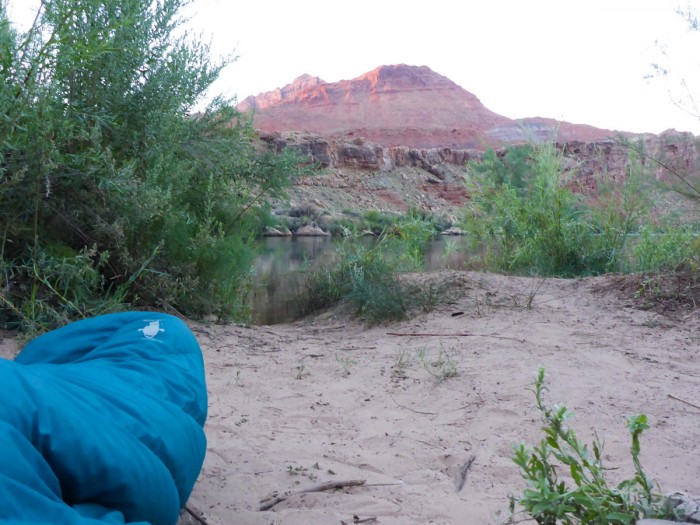 Two keys to not getting stung by a scorpion:

Sand Will Get Into Everything 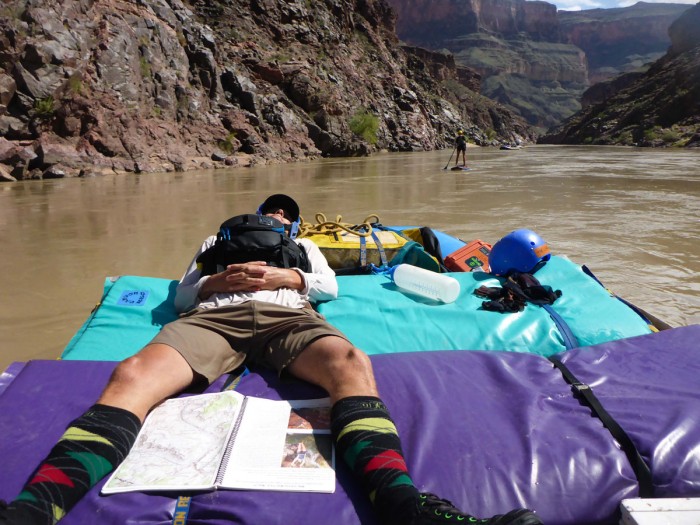 Packing for the Colorado River is a balancing act. You want to bring your nice gear and be comfortable for the two-week trip, but you also have to accept that most of what you bring will be stained brown by the thick, muddy water. A year later, you’ll open up a backpack or unzip a camera case and Grand Canyon sand will fall out. The super-fine particles are absolutely unforgiving.

You’ll want to keep that in mind when packing electronics. Bring extra plastic cases or Ziploc bags so that you always have a clean place to stow your camera, phone, backup batteries, GPS, and Bluetooth speaker. If you only own high-end gear, it may be worth investing in a midrange model you can afford to lose, because…

All Of Your Stuff Will Get Wet

When you start out—and hopefully each morning—your oar boat will be packed immaculately. Your clothes and personal gear will be in big dry bags that are strapped down to the floor of the boat, and you’ll have an ammo box or personal dry bag with the smaller stuff you need to access during the day. 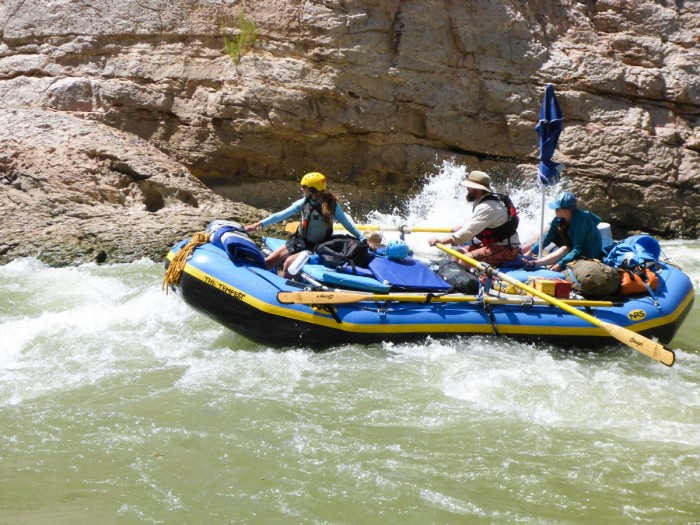 But you never know when the worst could happen. You’ll always be prepared for the big rapids like Lava Falls and Hance Rapid, but it’s the smaller ones that can be the most dangerous if you let them sneak up on you. In our case, it was Bedrock Rapid that ended up turning our boat upside down, just after lunch, when we were feeling lazy, sipping a post-meal beverage and generally not prepared.

Thankfully I’d brought my waterproof Panasonic Lumix camera (it took all of the photos in this article), but my iPod and speaker—despite being inside a cheap dry bag I’d purchased before the trip—didn’t survive the 30 minutes our raft spent upside down before we were able to catch up with it and turn it over.

Always be prepared, and be sure to purchase dry bags that are guaranteed “waterproof” and not just “water resistant.” And although it’s nice to have an SLR or high-quality camera for hikes and at the campsite, you’ll want to keep it stowed safely away while on the raft. Bring a waterproof camera for time on the water, and use a carabiner to connect it to your lifejacket via a hand strap.

You (Almost) Can’t Bring Too Much 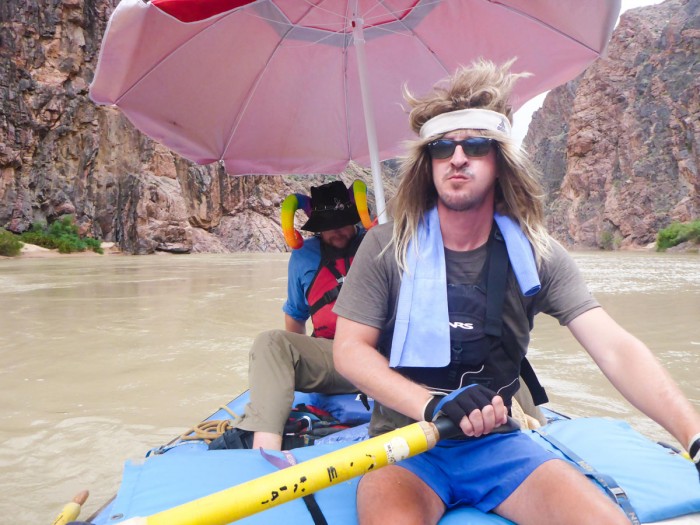 When you begin your trip, you’ll feel like you’ve brought far too much. Your boats will be completely loaded down. But consider that if you’re like most groups, well over half of that weight will be in the form of canned beverages, and once that frothy goodness has been consumed, the crushed aluminum takes up a lot less room (and provides far less ballast to keep your boat upright when you hit the big rapids—like the infamous Lava Falls—near the end of your trip).

So, unlike a backpacking trip, the Colorado River is a case where it may be okay to bring the kitchen sink. Stock up on sunscreen. Bring extra clean shirts. Bring an umbrella­—a big one for your raft, and a personal one for hiking. And for fun, pack some costumes: wigs, tights, dresses, rainbow-colored ram horns—whatever you can find. After even a few days settling into the pace of life (and the hot sun) on the Great American Adventure that is a rafting trip through the Grand Canyon, you’ll understand that normal dress codes simply don’t apply.

Stratton Lawrence is a writer, editor, and adventurer based in South Carolina, where he’s often on the water paddling the creeks and rivers of the Lowcountry. Whether he’s rafting the Colorado River or floating a blackwater river, he packs a tough, waterproof camera, to document his explorations as a travel and outdoors writer for eBay.com.

Up Next: Moto-SUP: Jet Propulsion Motor In Your Board

Saving…
Moto-SUP: Jet Propulsion Motor In Your Board
Mavericks: A Huge Break Goes Off Last Week
×