This month, the Colorado Department of Transportation begins charging a toll to use a third ‘express’ lane along the woefully traffic-laden Interstate 70. The question is, will it make any difference? 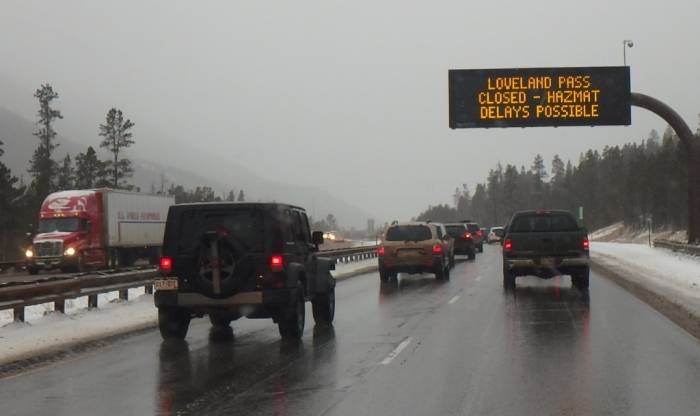 I-70 is a well-known traffic nightmare. The winding mountain highway — one of just two routes to the storied ski areas and high mountains of Summit County and beyond from Denver — is simply too small for the overwhelming traffic load it sees on pretty much any weekend or powder day.

To ease congestion, the Colorado Department of Transportation (CDOT) has installed a 13-mile “express lane” between Empire and the Central City Parkway, near Idaho Springs, that will be accessible to anyone willing to pay a $3 to $30 toll. The toll will vary hour to hour depending on demand.

CDOT spokeswoman Amy Ford told the Denver Post the suggested cap may never be reached. “We may never even touch $30,” she told the newspaper. “This will be a market-driven process.”

‘Most Expensive Road’ In U.S.?

At the maximum suggested toll rate, motorists would be paying $2.31 a mile to ride the express lane — a higher rate than any other toll road in the United States.

The toll will be used to pay off the $24.6 million loan used to help fund the $72 million expansion. Two lanes of traffic will remain free to use.

Officials say the express lane will move 750 – 900 vehicles per hour at about 45MPH, saving drivers an estimated half-hour on the drive back to Denver on a busy day.

The drive between Summit County and Denver — a pleasant hour and a half stroll under free-flowing conditions — regularly stretches to four hours or more when congested. And for people who drive it regularly, it seems to be congested all the time.

Even in the summer — ostensibly a slower season than peak ski season — traffic moves at a crawl on Friday and Sunday afternoons. Even mid-week traffic can be bad.

As the main artery to Colorado’s recreational hubs, officials hope the lane serving eastbound traffic back to Denver will help those with obligations and planes to catch make on-time arrivals.

The Colorado landscape is both a draw and obstacle for traffic to the high country.

Traffic lines up behind slow moving trucks and RVs on steep sections of the highway. Cars with bad tires spin out on snow-covered pavement, causing accidents that can snarl or even close the highway for hours.

When the two-lane road over Loveland Pass closes due to bad weather, Eisenhower Tunnel must close to most traffic on the hour to allow hazardous-materials trucks to pass through, backing traffic up for miles.

Ultimately, the busy road is limited in size by the Eisenhower Tunnel, a four-lane, twin bore hole under Loveland Pass that will cost an eye-watering $2 billion to expand.

That’s likely not to happen any time soon. In the meantime, Colorado visitors and residents will have to make do with a yet-unproven expansion to a lower portion of the highway.

Near Loveland Pass, the road will remain two lanes, and motorists should heed CDOT’s advice to avoid peak travel times.

Either that, or pack a lot of tunes and plan to wait it out.

Up Next: Land Grab? Myths Of The American National Monument