The crosscut saw is a workhorse of backcountry forestry and trail maintenance. But due to its tiny niche in the cutting market, finding a quality crosscut is harder than ever.

For better or worse, the crosscut saw is a legend of American forestry. Following westward expansion, the humble, no-gasoline, human-powered crosscut took down some of North America’s most massive Douglas firs, redwoods, and sequoias. 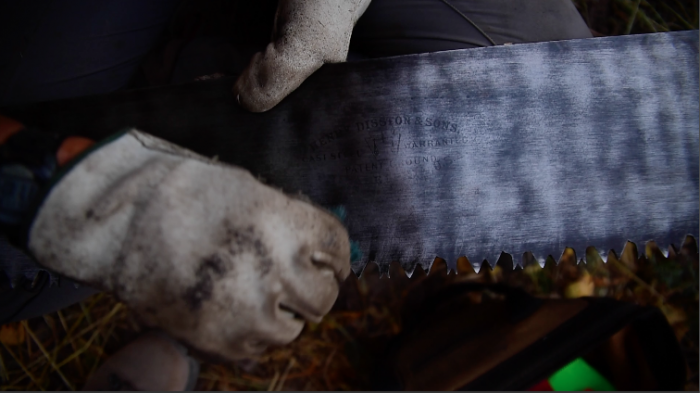 Even after the chainsaw displaced it in the 1950s, the saw retains a small but devoted following. For trail crews working in designated wilderness areas, where motors are prohibited, crosscuts are still essential.

And yet, to find a quality saw-maker nowadays, you have to go all the way to the other end of the world (more on this later). But for those who rely on this valuable tool for work in the backcountry, the hunt for crosscut saws often winds through unexpected storefronts.

Dolly Chapman has been working on trails since 1977. In her career with the U.S. Forest Service, she’s led crosscut crews in four different national forests. One of the few remaining professional crosscut sharpeners around, Chapman receives hand-mailed saws from customers all over the country. 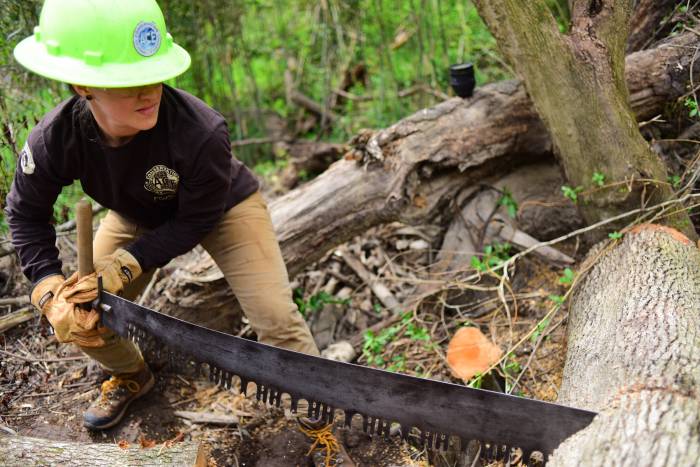 The differences between a vintage saw and a modern saw, she said, are legion. Vintage saws were made from top-quality steel, while modern saws are made of thin, soft sheet metal. Yesterday’s saw teeth were set in an arc, giving each tooth an equal cut, while new ones are set in a straight line.

Vintage saw teeth were stamped out evenly, and modern ones aren’t. Old saws were taper-ground, creating less friction with the wood and therefore less work for the sawyer. New saws are flat-ground.

To Chapman, the reason for these modern failings is obvious: “A friend of mine said he asked an owner of a saw company, ‘Why do you make such junk?’ And the owner said, ‘Because people buy it.’”

But these minor reductions in quality add up. Around the country, trail crew leaders hunt for vintage saws wherever they can find them.

U.S. Forest Service volunteer David Roe instructs trail crews on crosscut use in Oregon and Washington. For him, finding quality vintage saws is part of the fun. 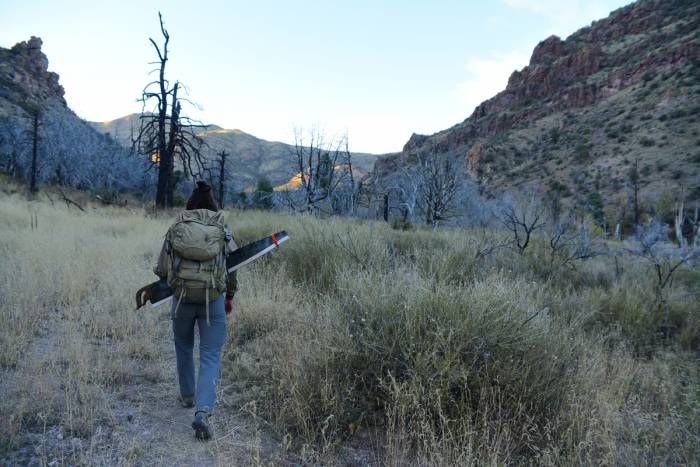 “Sometimes I take road trips just to look for saws,” said Roe, who lives in western Oregon. “I’ll drive down Highway 49 in California and stop in every secondhand store in every small town along the way.”

He’s not alone. Trail crew leaders across the U.S. make a veritable sport of crosscut hunting in antique shops, garage sales, eBay, and thrift stores. The real thrill, though, isn’t in the search. It’s in the teamwork and the calming rhythm of rakers grinding out strings of fresh tree meat on a trail 6 miles from the nearest road.

“Chainsaws are work. Crosscut saws are exercise,” Chapman said, quoting a friend. “With a chainsaw, there’s no relaxation. You’ve got the noise and pull of the engine, and fast action. With crosscut sawing, there’s a relaxation and using your large muscles and making the tool do the work.”

Diehards aside, it’s still a niche market. Still, there is some good news for the crosscut, if not for the climate it works in. As fire seasons grow longer and drier in the West, more and more crews are relying on crosscut saws when fire danger prohibits chainsaw use. Roe has been seeing more requests for training courses for that reason.

Chapman said if you want a quality modern saw, you have to go to Tuatahi Racing Axes & Saws in New Zealand.

The company, for its part, said its saws are mostly made for competition sawing and lack some of the portability and ergonomics of a saw made for forest use. Short of that, you can head to the antique store or wait for a brave new entrepreneur to try to bring quality saw-making back.

“It’s an economic problem, not an engineering problem,” Roe said. “We know we can build them. I’ve built prototypes. They work great. It’s the financing of the equipment necessary to get started. I just have to hope that someday I convince a company to pick up where companies like Simonds Saw left off in 1952.”

Up Next: SPOT X Sat-Com Now Compatible With Smartphones, Bluetooth