Update (July 12, 2015): Scott Jurek has broken the fastest-known-time (FKT) on the Appalachian Trail (AT) by approximately three hours. He completed the 2,160 mile trail in 46 days, eight hours and eight minutes, reports iRunFar.com, breaking the previous FKT, which was 46 days, 11 hours and 20 minutes, set in 2011 by Jennifer Pharr Davis. Jurek summitted Maine’s Mount Katahdin, the northern terminus of the AT, just after 2 p.m. eastern time today (July 12). He departed from Springer Mountain in Georgia on May 27. Congrats to Jurek on this monumental effort!

Just how tough is this trail? The legendary runner is struggling to match a record set by someone who hiked the whole thing. 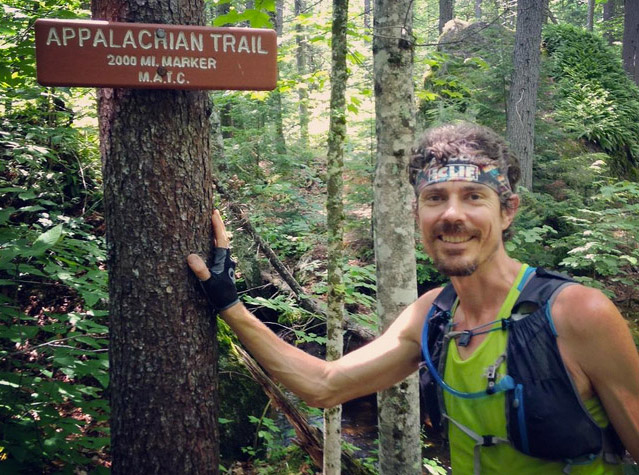 2,160 miles from Georgia to Maine. Over 500,000 vertical feet. Trail so technical it consists, in spots, entirely of broken-up rock — and still, the Appalachian Trail (AT) is harder than it sounds.

Just ask Scott Jurek. The seven-time winner of the Western States 100-Mile Endurance Run, as well as winner of the Hardrock 100 and Badwater 135-mile, is cutting it close in a fastest-known time (FKT) attempt of 46 days, 11 hours, and 20 minutes.

Appalachian Trail Day 44: Kennebec River crossing this morning with my buddy @tgaylord. Reminded me of being a kid again! HUGE thank you to @adventureboundrafting John and Mandy for making this possible. ? @krissymoehl #SJAT15 #EatAndRun #GeorgiaToMaine

It’s a far cry from his original goal of beating the FKT by four days. Jurek’s difficulty is made arguably more remarkable by the fact that the current FKT is held by Jennifer Pharr Davis, who at age 28 set it by hiking the entire way.

That’s not a dig on Pharr Davis — quite the opposite — as her more patient approach lowered a record that had been held by men, usually runners, for several decades prior.

Appalachian Trail Day 39: Perfect temps and views from the Northern Presidential Traverse on Independence Day, I’ve been looking forward to this section and it did not disappoint. Happy 4th, everyone! #SJAT15 #GoergiaToMaine #EatAndRun ?Luis Escobar A photo posted by Scott Jurek (@scottjurek) on Jul 4, 2015 at 6:25pm PDT

Jurek is not the only elite ultra-runner who has tried, and struggled, to beat the AT record.

Most recently, fellow Hardrock winner Karl Meltzer tried but abandoned the attempt last year; he also attempted the record in 2008 but, slowed by injuries, finished in just under 55 days.

The lesson, we suppose, is that anything can happen over the course of 46 days and over 2,000 rugged miles; that Pharr Davis’ slow-but-steady approach might be the key to FKTs on the longest routes out there; and that the Appalachian Trail is tough as hell.

Up Next: Recall: Jetforce Avalanche Airbag From Black Diamond