A growing number of helicopter-supported mountain run programs are popping up across high-alpine landscapes. Here’s the where and why.

Helicopter aid may seem counterintuitive to most mountain runners. But there’s a swell of programs offering heli bumps to jumpstart human-powered exploration.

An air taxi into the wilderness eliminates the need for a traditional foot approach. Instead, runners can maximize their time and energy exploring specific segments of remote, undeveloped, mountainous regions.

Why Run From a Helicopter? 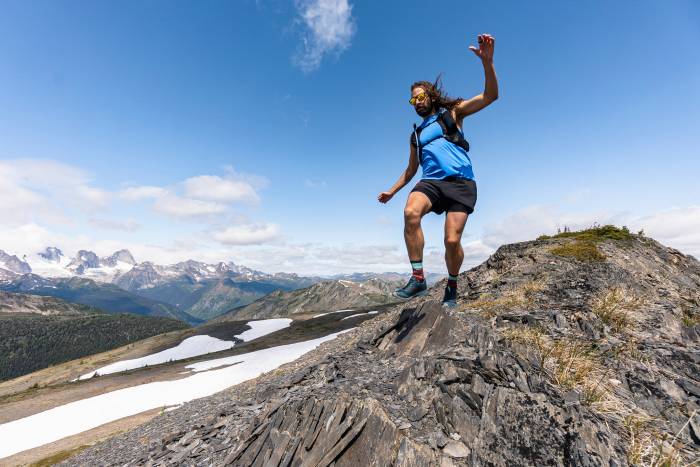 Warm wind swooshes hair around my face at 8,400 feet. I bound off the 20-foot-wide ridgeline, landing in the basin’s 30-degree slope. Soon, gravity accelerates my pace on the 600-foot descent over soft mud shale, and I let out a celebratory hoot.

Of course, no one hears me. Except for our 10-person mountain run crew scattered across the face, not another soul is in sight.

I traveled to British Columbia to learn about these new helicopter-supported mountain running programs. We are heli-dropped in the heart of British Columbia’s Purcell Mountains, between Bugaboo Provincial Park and the Septet Range. As the crow flies, we’re 5 miles southeast of our overnight cabin — but 4,500 feet higher than the valley floor.

The shale peters out. My group reconvenes on a knoll, overlooking a brilliant teal tarn and jagged cirque. We’ve run 7 miles and 2,000 vertical feet of pure ridgeline. Our guide radios the pilot. Four minutes later, our taxi lands. One by one, we jump in. Within 15 minutes, our shoes are on the drying rack and we’re sipping brews. And it’s just mid-afternoon.

Based on my experience, heli-mountain running has a few serious advantages over mere terrestrial trail running. It delivers you to middle-of-nowhere mountains with no crowds, clean air, and zero developed trails. A lift allows you to skip long, arduous approaches/returns and having to bushwhack to get where you want to run.

For instance, one 5-minute lift with CMH Heli-Skiing & Summer Adventures from the Bugaboo Lodge to a nearby ridgeline ousts a 1.5-day ascent through thick or impassible vegetation, swarms of mosquitoes, and a 3,000-foot gain.

Those are big numbers, ones that are fueling a small but growing sport of heli-supported mountain running outfitted trips.

Helicopter recreation isn’t new in British Columbia. Heli-skiing was pioneered in this region in the mid-1960s, followed by heli-supported hiking 20 years later.

Mountain running — at high elevations, with and without trails — is one of the newer summer offerings and the one I was most interested to try. It’s worth noting that most of these trips are more than just a quick shuttle to the backcountry. They usually include guides, accommodation in backcountry lodges, and food. 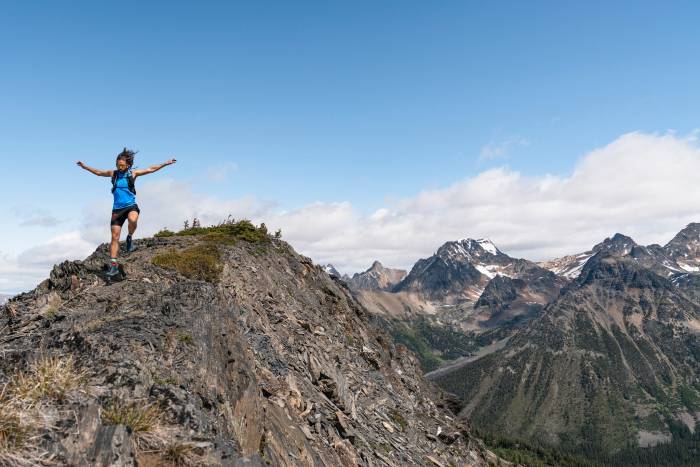 I’ve done plenty of backpacking and ultraruns at high altitudes throughout the last decade-plus. And I love planning my own unguided trips. But eliminating the responsibility of route research, food preparation, and packing gear saves a ton of time, and sometimes stress, before far-out mountain trips like these.

You pay for the luxury. These programs cost between $790 and $2,705 per trip. Comparatively, a week’s vacation in Maui, Hawaii, is around $2,000. So, as all-inclusive adventure vacation packages with helicopter lifts go, these programs are pretty well-priced.

Now, RunBC Adventures and Altus Mountain Guides co-lead a run program via that hut system, too. Those 5-day camps offer a single helicopter dropoff and pickup. The helicopter also transports the group’s cargo to each hut, so runners move with a light pack. 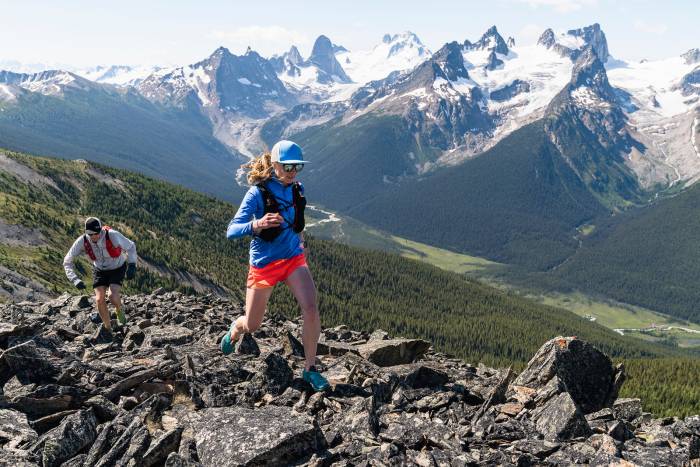 CMH piloted a mountain run program in the Bugaboo Mountains (that will formally launch in 2020), which I experienced this summer. Over 3 days, runners will stay at the Bugaboo Lodge with daily flights to peripheral high-alpine ridges, summits, and lakes to start each run. Runners can opt for a bump (a pickup) to relocate. That’s two to four flights per day.

Beyond North America, race events around the world are integrating heli-lifts. In Sweden, the Run Through the Wild Arctic Circle Race kicked off with optional helicopter transport to the start line. Entrants can either walk to Lake Guijaure or receive a dropoff (for which the entry goes from $82 up to $142). All racers run along the Arctic Circle back to Camp Polcirkeln.

Helicopters need a lot of fuel, make noise, and are costly to operate. Alpine Helicopters (AH), who works with the Esplanade Range and CMH programs, uses three airframes that burn 30-100 gallons of Jet A-1 fuel (at $80 per gallon) per hour. 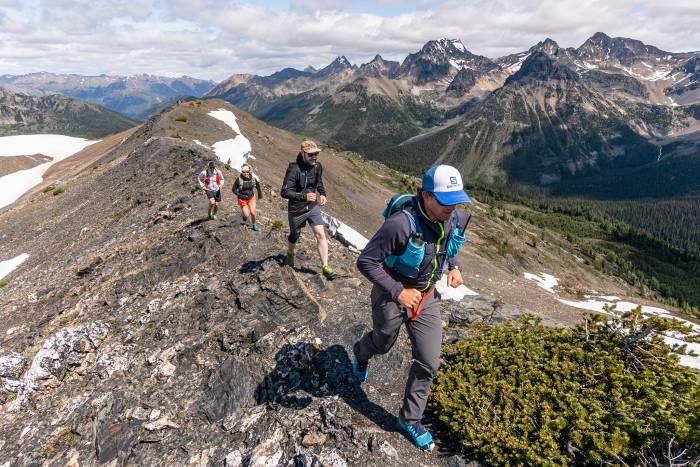 “We update and lighten all of our helicopters as much as legally possible for efficiency and to burn less fuel,” said Todd Johnson, director of business development for AH. Other improvements include reducing trail drag and increasing the engine’s high-altitude performance. Lightweight floorboards, removing airframe pieces, and reconfiguring components for balance — rather than adding dead weight — also help.

“There’s planned choreography between guides and pilots, so the machine’s air time is minimal, and to maximize fuel, which is cost,” said Dave Butler, director of sustainability for CMH. Once the helicopter powers up, it shuttles groups in quick succession and, unless a need arises, shuts down until pickup.

Of course, helicopters also make noise and can be disruptive. Thus, governmental watchdogs keep an eye on commercial helicopter operations such as AH and require strict permitting.

How to Go Heli-Mountain Running 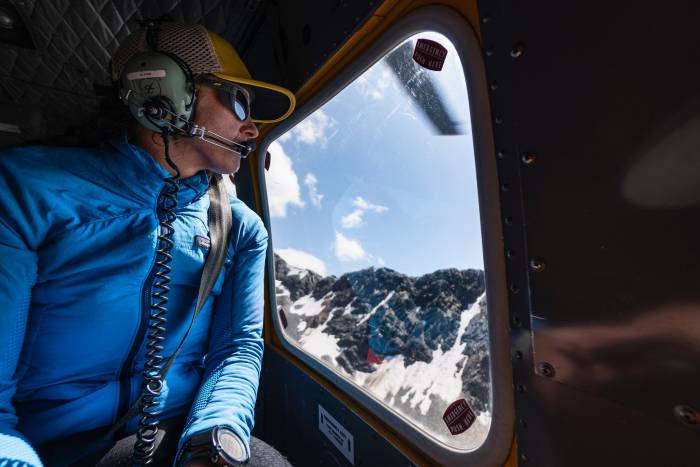 AH doesn’t have a license to operate in the specific areas where I went mountain running — along the Esplanade Range and in the Bugaboos — so it partners with companies that do. To get heli-support for running in some locations, you need to sign up with an accredited company that offers a guided trip — like RunBC Adventures or Altus Mountain Guides.

Some areas don’t require a specific helicopter license to fly. In that case, AH or other helicopter companies can offer personal dropoff and pickup.

“The pricing would vary on the distance to travel to the dropoff and pickup, but we can work with anyone to make this happen. Our operations in Canmore and Golden would be involved directly with any visitors to ensure that the best experience possible is coordinated safely and efficiently in the areas they desire to experience,” Johnson said.

Overall, flying in a helicopter is a rad experience. Being shuttled over and around sharp, isolated, stunning peaks — followed by wilderness exploration on foot — is surreal.

It’s not a cheap run experience. But, training for endurance events can be an expensive endeavor, too. This takes far less effort with zero crowds. I’d go again.

Up Next: Drive South for the Winter to These 5 Warm Retreats

Saving…
Drive South for the Winter to These 5 Warm Retreats
Road Work: Tips to Make the Most of Your RV Office
×