It’s possible no endurance athlete has been more consistent, for longer, than Meb Keflezighi. 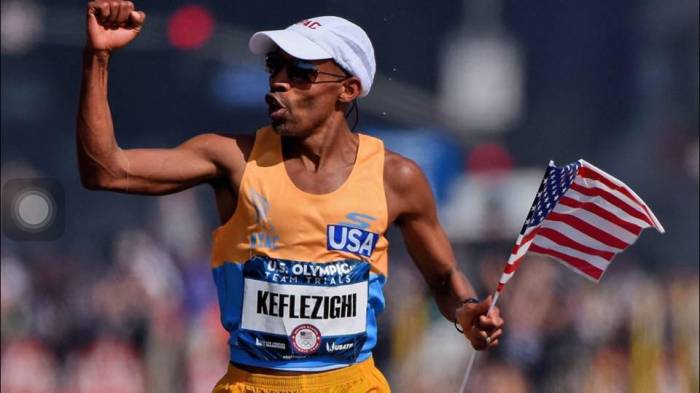 The 40-year-old – he’ll be 41 in May – distance runner’s Olympic career stretches back to 2000, when he represented the US at 10,000 meters. In 2004, in Athens, he earned silver in the Olympic Marathon; eight years later, in London, he slipped only two places, finishing fourth in the marathon. He won the 2009 New York Marathon and the 2014 Boston Marathon, running a personal record 2:08:37 and beating a slew of younger runners with sub-2:06 personal bests at the latter.

We spoke with him to learn how to keep performing at your peak year after year.

Still, his age was a question mark at last month’s U.S. Olympic Marathon Trials in Los Angeles, where his old guard would be tested against a slew of talented athletes with comparable personal bests, all in their 20s and 30s.

And yet Meb surprised almost no one there, running a smart early pace, matching a mid-race breakaway, and finishing second (behind reigning Olympic 10K silver medalist Galen Rupp, in his marathon debut). He’ll represent the U.S. at the Rio games this summer, his fourth Olympics.

How is he still doing it? How can you keep performing within arm’s reach of your best as an endurance athlete once you hit 35? 40? 50?

You might think Meb keeps doing well because doesn’t think about his age – that he doesn’t let it get in his head.

“As we get older, we have to evolve with the individual,” said Keflezighi, who is based in San Diego, and recently wrote the training book Meb For Mortals with Scott Douglas. “Nutritionally you have to change. And you have to change the way you approach your training.”

3. Listen To Your Body In Training

The key to performing well is to train consistently. And the key to training consistently is to avoid injury. To do that, you’ll have to dial back your training slightly as you get older. 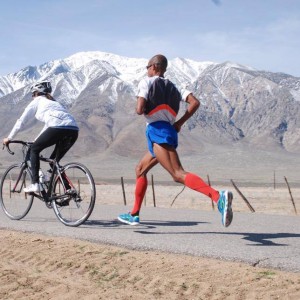 Keflezighi sings a song familiar to endurance athletes: “I used to be very particular about my mileage, and about how my week was structured,” he said. “Every week, I needed to have an interval workout, a tempo run, and a long run.”

As he aged, Keflezighi said, he required more recovery time between those hard efforts. So he lengthened that training “week” cycle from seven days to nine, meaning he has two extra days to fit it all in.

“I used to have to go out and add four miles just so I could hit 136 miles for the week, or whatever,” he continued. “Now I don’t tally the numbers up. I’m running 10 to 16 miles a day, plus some cross-training, and maybe hitting 105 miles per week, but the point is, I listen to my body rather than going for any number.”

Whereas Keflezighi used to go on a second, easy run almost every day to supplement his training mileage, he now eschews the second session of pounding for a session on the ElliptiGo, a mobile, outdoors version of the elliptical machine you see at the gym.

One downside here – or upside, if you have the time – is that whereas a 30-minute run used to satisfy his second workout requirement, Keflezighi spends 1 hour 45 minutes – 2 hours on the Elliptigo; it’s a testament to the fact that it takes longer to get the same benefits, but also that the lower degree of pounding allows him to go longer and procure more aerobic benefits from a session.

We all know this one. Your activity level allows you to eat like a teenager – to a point. At a certain age, no level of activity makes your furnace impervious to whatever you eat, and you have to be more nutritionally conscious to both control your racing weight and be optimally energized. 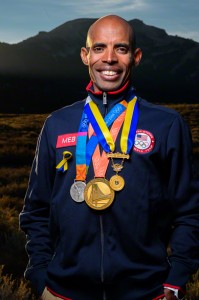 “At age 33 or 34, my metabolism slowed down quite a bit,” Keflezighi said. “Especially when you travel, eating healthy is a big challenge.”

He said a key to controlling calorie intake is snacking regularly – particularly while traveling – and planning ahead to avoid getting famished and overeating. He cites his affiliation since college with PowerBar as a key resource in keeping him both fueled and lean.

“I’m also lucky to have lots of support in my family,” Keflezighi said. “My wife and my brother, people who can take care of food and travel for me. There are lots of people who aren’t in the spotlight that make it easier for me to stay healthy and perform my best.”

6. Put In The Time (Before And After Your Run)

Always pick the latter, Keflezighi said, especially as you age.

“In my 20s, especially in college, we’d go right out the door without stretching or anything,” he said. “In your 30s and 40s it’s important to warm up, start slowly, wake up your muscles, and stretch well.”

“It’s much better to run one less mile and dedicate five minutes to pliability and strength,” he continued. “Stretching, foam rolling, and recovery [including eating soon after you finish] are important.”

Keflezighi said he never maxes out in training, as it’s better to run 99 percent of your potential and stay healthy than to reach for 100 percent and be foiled by injury.

“You should leave a little in the tank after a workout,” he said. “It’s better to arrive the next day than to leave it all in your cooldown.”

Keflezighi even uses the same approach in racing, when it’s appropriate.

“I was in second late at the Trials, and no one was chasing me at the end,” he said. “I figure if I’m on the team, there’s no need to push too hard, plus I can look good doing it.”

The discipline to hold back when you need to, Keflezighi said, is a much bigger challenge than finding motivation to push. Just two weeks before the Trials this year, he came down with pain in his posterior tibialis – a form of shin splints. So he immediately backed off and got some medical help for it.

“You can either do that, or you can try and push one more day and potentially blow your whole season,” he said.

8. If You Do It Right, You Can Race More Often

If you pay proper attention to your body’s signals, approach your training correctly, and train consistently enough, you can actually race more often because you will need less prep time between races to reach your optimal fitness. 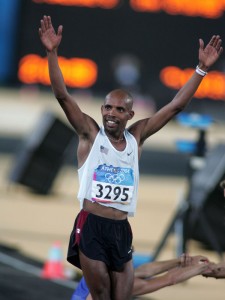 “I ran the Chicago Marathon in [October] 2003, the Trials in [February] 2004, the Olympics, then the New York Marathon 70 days later,” Keflezighi said. “When you can stay healthy and invest a lot in staying healthy, you can race frequently because you’ll remain at a high level of fitness.”

That doesn’t quite mean you can throw conventional training wisdom out the window – for instance, even with a short buildup, Keflezighi said some base-building phase is necessary prior to adding intervals and tempo runs. “You can increase your mileage or increase your intensity, but if you increase both at the same time you can get injured,” he said. “You still have to work up to your long runs – just because you used to run 22 or 23 doesn’t mean you can go right back there. Unless you have a deadline coming up and are willing to take the risk by jumping up quickly, let it come to you.”

For all the attention Keflezighi pays to his age in optimizing his training and staying healthy, he makes a point to forget it come race day.

“I go into a race knowing I’m as prepared as I can be,” he said. “You do some homework on your competitors, but when the gun goes off, you have to say, ‘hey, I’m ready, and if anyone is more ready than me, they’ll beat me, and I’ll congratulate them.’”

“But I don’t get intimidated by age,” he continued. “I’m at a point where it’s 10 percent physical and 90 percent mental. I just won Boston a couple years ago in 2:08, and I know there aren’t a lot of Americans who can do that.”

That said, Keflezighi has been more prone to inconsistent racing days in the last few years. In New York in 2013, he faded hard from the lead pack and finished 23rd in 2:23:47. He said the key to bouncing back is not to get too wrapped up with this or that result.

“You respect the distance and respect your competitors, and hope you have a good day,” Keflezighi said. “You never know what’s going to happen in that race.”

He followed up that race in New York by winning Boston in a personal best time, at age 38.

Rio will be Keflezighi’s 24th competitive marathon. He said he hopes to run two more after that.

“That will be 26 marathons,” he said. “I still want to run, pace people, and things like that, but I think that will be enough to run competitively. The marathon is no joke – it beats me up.”

Keflezighi said he looks forward to more public speaking and running expo engagements, where he gets the chance to meet other runners from all walks of life with unique goals of their own, as well as working with his foundation, which focuses on health and fitness for kids.

When his competitive days come to an end, it will close one of the most storied and successful chapters in American distance running – ever. And Keflezighi said he is completely satisfied with it at the moment.

That, of all things, might make him one of the toughest runners to beat in the world right now.

“I used to get anxious before races, but at this stage I have nothing more to prove,” he said. “I was thinking if I make the Olympic team at 40, wonderful; and if not, I’ve been blessed to have the career I’ve had.”

Up Next: Movie Review: Ultrarunning Vs. Mental Illness In ‘Fifty’