We love snowshoeing. But note: It might be the most difficult thing you’ll ever do, especially if you decide to race. 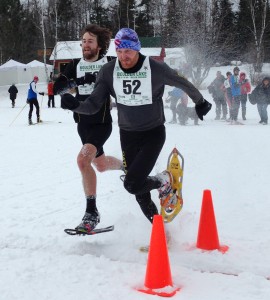 If you’re a runner – or even if you’re not – winter provides a lot of options to stay in shape while taking it easy on your joints. Cross-country skiing and fat biking for instance, will give you a good burn with a relatively gentle touch.

Or, you can double down, and make running twice as hard with a pair of snowshoes.

“During my first snowshoe race, I thought I was extremely out of shape,” said Eric Hartmark, a distance runner turned snowshoe racer extraordinaire from Duluth, Minn. “I was hurting very badly early in the race. I later realized that snowshoeing is just a lot more painful than road racing.”

Hartmark, 36, a former Brooks-Hansons pro runner who, at the urging of his former coach Kelly Mortensen, first strapped on borrowed boards for a national championship qualifier in 2011 (after an attempt in 2010 was foiled by a no-race-day-registration policy, which he later learned didn’t exist); he has twice won the US Snowshoe Association (USSSA) national championship and thrice more made the podium. Four times, he has donned the red, white, and blue at the International Snowshoe Federation (ISSF) World Championship, finishing as high as second.

And still, he can’t deny that snowshoe running just completely sucks. Mortensen has cited clipped ankles, an awkward, wide stride, and more weight on your feet that will make your lungs and ego burn in tandem.

On the plus side, when you face plant, the snow is a little gentler than the bare, rocky trail. “Although that is only if you are not trampled by snowshoe racers shortly after you fall,” Hartmark clarifies.

It happened to him once, at the 2013 ISSF World Championship in Val di Non, Trentino, Italy. The misadventure started before he packed when, again, he needed to borrow a pair of snowshoes. He owned some by now, but they had been manufactured without bindings – a weight advantage he believed to be in violation of ISSF rules.

Standing on the crowded start line in his borrowed pair, he learned he needed to have the new kicks certified by a race official, the nearest of whom was behind the narrow starting chute. Time winding down, he wedged his way through the veritable cattle car, found an Italian-speaking official who could interpret his frantic gesturing to mean “I need a certification tag,” and squeezed his way back to the front of the line, where he noticed “over 90 percent” of his competitors lacked bindings on their snowshoes.

The ISSF bylaws apparently only loosely enforced, Hartmark said a lot of European competitors began sliding ahead of the start line, and ahead of him, as he struggled to understand the Italian PA announcer. “They kept gradually inching forward,” he said. “When the race started, a lot of them were a full meter in front of the line.”

At the gun, he was choked off, struggling to find room to step (or breathe) in a narrow passageway, much further behind the leaders than he was accustomed. A small strip of snow, imported from another city, comprised the racetrack, and proved too slender to allow passing on the outside.

After a quarter mile or so, Hartmark found a rhythm, began passing people, and started jonesing for a position with the lead pack. But a competitor barreled through the narrow space between him and an adjacent racer, slamming (deliberately, it seemed) into Hartmark, who was thrown off balance but stayed upright.

Just ahead, the ne’er-do-well put the same move on Hartmark’s American teammate, who wasn’t as lucky, and went down hard.

“I quickly jumped, trying to avoid stepping on him, but lost my balance in mid-air, flew forward, and landed on my chest,” Hartmark said. “I quickly pushed my hands into the ground in an attempt to get back up, only to feel the sharp spikes of a snowshoe in my back, forcing my face back into the snow.”

“I went to get up again and saw a snowshoe narrowly miss my face,” he continued.

In other words, if you’re looking for that gentle departure from the pounding of running this winter; stick to the skis or the fat bike. But if you want the toughest workout of your life, try snowshoe racing.

Up Next: ‘Big Air’ In Fenway Looks Wild, Entertaining