AS A FLATLANDER BORN AND RAISED on the North Dakota plains, “high” and “dry” are two things I rarely face in my adventures. I regularly bushwhack through neck-high reeds, swat bugs, and splash through lots of water. I also have a lifelong fear of heights, which I challenge intentionally by putting myself in lofty places at the end of a rope.

So when the opportunity arose to willfully back off the edge of a perfectly good cliff in airy, dry Utah, I said “sign me up.”

Next thing I knew, Tim Pote was explaining that when you rappel off of an overhang into free space, you want to have your butt below your feet before descending. The group was ready to move, everyone waiting for their buzz, with the noob holding up the line. I loosened the grip on my brake hand and eased into the red void.

Off The Beaten Path

The Capitol Reef area of southeastern Utah is a raw wilderness. Nearby national parks like Arches, Zion, and Bryce Canyon are well known even to casual outdoor enthusiasts, and they remain busy during all but the hottest and wettest parts of the year. There is no nearby (major) airport with commercial service. Utah’s liquor laws make it an unattractive party destination. Arches and Canyonlands tend to draw the crowd from neighboring Colorado, leaving Capitol Reef fairly open for locals and off-the-beaten-path travelers.

Centered around the historic orchard town of Fruita, Utah (not to be confused with Fruita, Colo., or Fruita, Calif., also adventure hubs in their own right), the Capitol Reef area includes a series of canyons on the edges of ancient tectonic cliffs. The national park protects the Waterpocket Fold, a monocline that exposes the geology along a 100-mile stretch of Utah desert. Formed by water draining from high ground over the edge of cliffs as they separate from the adjacent plates, these canyons fill the massive Grand Wash that drains to the Fremont River, a tributary of the mighty Colorado.

Canyoneering, a niche climbing-related activity, involves rappelling and down-climbing through the narrow slot canyons common in the desert Southwest. Similar to rock climbing in its use of ropes and techniques, it is considered a separate discipline because of water, tight passages, equipment management, and specific risks.

In The Hands Of Professionals

Our guides are a mountain goat of a man, Steve Howe, legendary in the outdoors community as a journalist and adventurer, and his assistant Tim, of Red Rock Adventure Guides. Both eschew the modern, gear-centric approach–Tim using multiple trucker caps and layers of button-down shirts to manage temperature and shade, and Steve deploying aging basketball shorts instead of the latest-tech fabrics.

But their setup is tight: Every rap is on belay, harnesses are backed up with slings, and anchors are… well, we’ll just say the anchors are bomber-ish. If there’s a bolt in this park, they may have placed it, usually because they and the National Park Service were worried someone who didn’t know what they were doing might make a big mistake.

The first day of drops starts at the top of Fifth Wife Canyon, a smaller feature off the Cohab Canyon system that drains into Grand Wash. The legend behind Cohab and “The Wives” is that area Mormon polygamists fled to the area when federal troops arrived in 1857/58.

We hike partway down Cohab, past our exit point and a number of smaller slots. Walking down one narrow passage, the chunkier among the team (ahem) has to squeeze between two walls in a near panic-inducing state before emerging into a sandy room with epic bouldering possibilities. Just past our exit point, our guide stops, looks around, and takes an abrupt turn uphill. Clearly not on an established trail, Steve is kicking over cairns as we alternately switchback up the canyon wall and walk across fields of weather-worn slickrock.

Up top, the view is amazing. Two prominences are visible as we walk around the edge of the canyon: Fern’s Nipple and an apparently unnamed flatiron of Navajo Sandstone whose bases we’d hiked around the day before. Below, the massive Wingate shears pile up in the wash.

In a shady and, more importantly, windless–alcove, we snack and gear up, and Steve and Tim go over the basics. We down-climb closer to the anchor, and, one by one, we tie in and go over the edge.

Abseiling in these environments is a slow, measured effort. It takes 6 hours for 9 of us to make 7 drops (a total of 63 rappels). It’s only 350 feet down.

By the time I’m on-rappel and on-belay, the nervousness I’d amassed on the hike up has faded. Other than an awkward squeeze and turn at the step-off, the first rappel is just restrained backwards-walking.

We’d been warned about potentially waist-high water. At the bottom of the second rappel, I look over the edge at a little down-climb into a pool – fortunately just knee deep – and a short, if cool, walk to the other side. Some of the crew stems across the pool and avoids getting wet entirely. 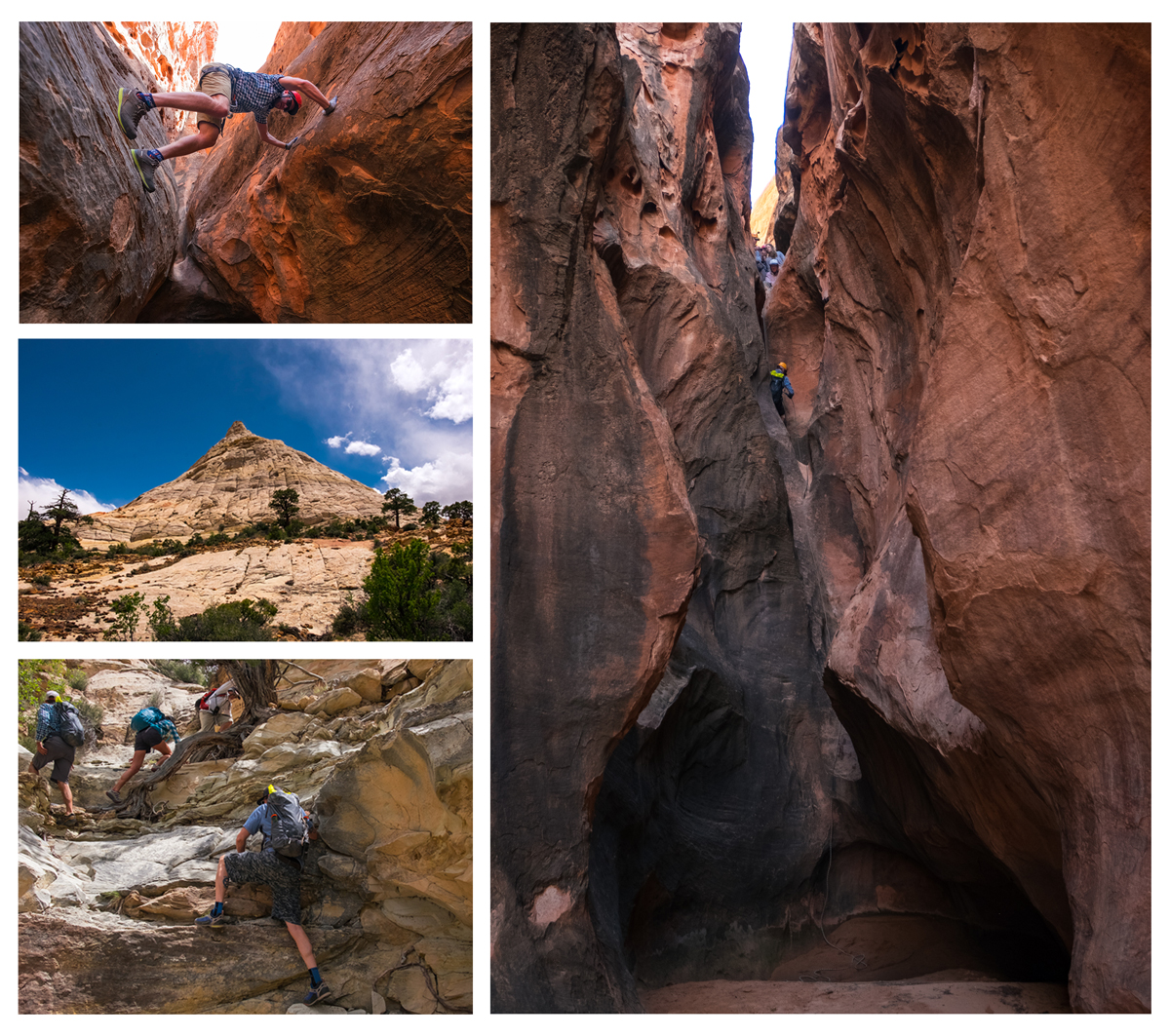 Taking my turn at the third anchor, I find our guide standing on a pile of rocks with some webbing coming out of it and disappearing into the void below, where presumably one of my compatriots is dangling. The sketchiest of our anchors is a dead-man–webbing tied around something that is then buried (and maybe has a pile of rocks on it for good measure). You may as well have someone stand on it too. Better still, this rappel has an overhang, leaving the abseiler in free space for about 50 feet.

The phalanx of climbers continues through the canyon, each drop opening up a little further, with more sand and plants collecting at the edges of the temporary pools. As we remove harnesses and helmets along the edge of the tourist trail, there’s an immense satisfaction at the accomplishment.

At first terrifying, canyoneering quickly becomes gratifying – there is no better way to view the geology and harsh beauty of the surroundings. Quiet and still compared to the blustery desert surface, the canyons are soothingly cool. I switched from fussing about my survival to being worried about the day being over, time to head out of the desert and back toward home.

Saving…
Pedals To Paddles: An Epic Remote BC Bikeraft
×