A self-supported race across China’s Gobi Desert, the ‘Gobi March’ pits racers against mountains and temps exceeding 120º F. Our contributor toed the line last month to test himself, and his gear, to the limit. 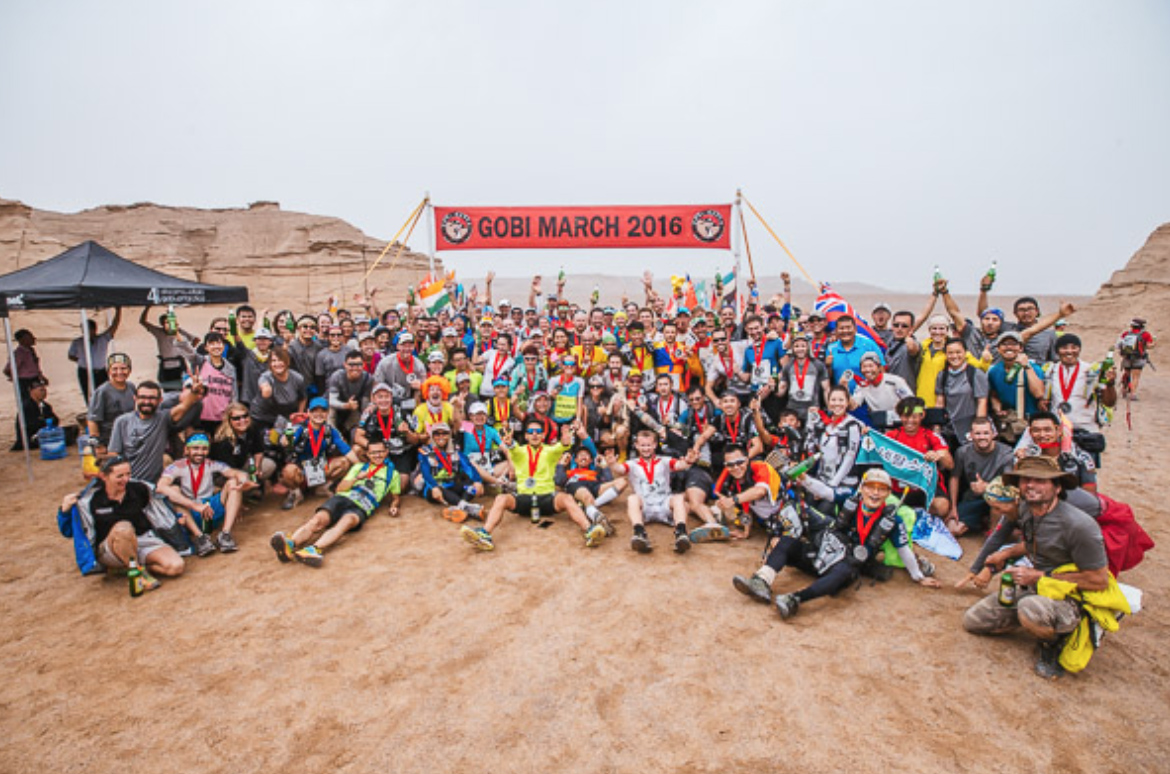 IT’S 3:28 P.M. AS I ROLL INTO CHECKPOINT FIVE, more than eight hours since the day’s start. I am operating at a slow shuffle, my only thought is to find shelter from the 124-degree heat.

I squeeze into a sliver of shade offered by the shadow of a pickup truck. Someone hands me a Pepsi, a little treat from the race team in this almost entirely unsupported endeavor.

The aluminum can burns my hand, and the boiling Pepsi stings my throat. I wash down the hot soda with even hotter water. I curse the unbearable heat. It’s like drinking hot tea on the beach…but with no ocean in sight.

I participated in a number of marathons, ultra-marathons, and shorter races prior to signing up for the 2016 edition of the Gobi March. I even completed the 2015 Atacama Crossing, a race hosted by the same organization that manages the Gobi March, 4 Deserts.

But the Gobi March was the toughest challenge I’ve faced yet. It is a 250 km (155 mile) self-supported stage race across the northwestern region of China in the Xinjiang province, passing through parts of the Gobi desert. 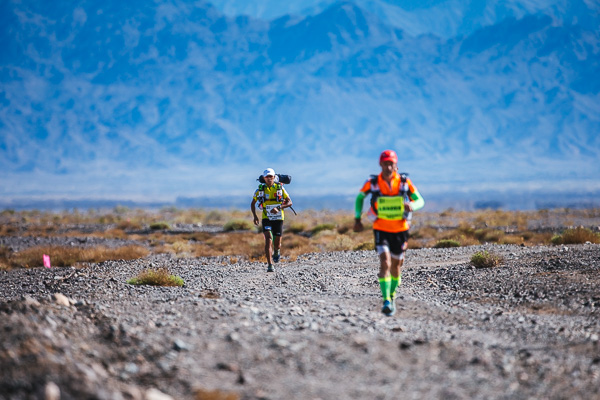 What makes the 4 Deserts races special is that you must carry everything needed to survive for a week, in a pack, for the entire race.

There were 35 mandatory items for the Gobi March. These included a sleeping bag, emergency whistle and signaling mirror, headlamps, running gear, warm clothes, a hydration system, a sufficient electrolyte supply, and seven days’ worth of freeze dried food that packed a minimum of 14,000 calories.

I added in a few “luxury items” such as Vaseline, a set of dice and playing cards, an iPod shuffle, and a few bags of tea. My personal pack for the race start weighed in right around 12.5 kg (about 27.5 pounds).

After a day of the race staff and medical team briefing all the competitors on the course and checking to ensure we had all the mandatory equipment, we loaded onto three buses and drove four hours to Camp 1. We stayed the night in tents with eight to 10 other competitors.

The local people of the region came out to greet us at the camp with traditional dances and a reenactment of a polo-like game played with a dead sheep’s head (no sheep head was used in the reenactment). Competitors mingled with race staff, volunteers, the medical team, and each other before heading to bed for the evening 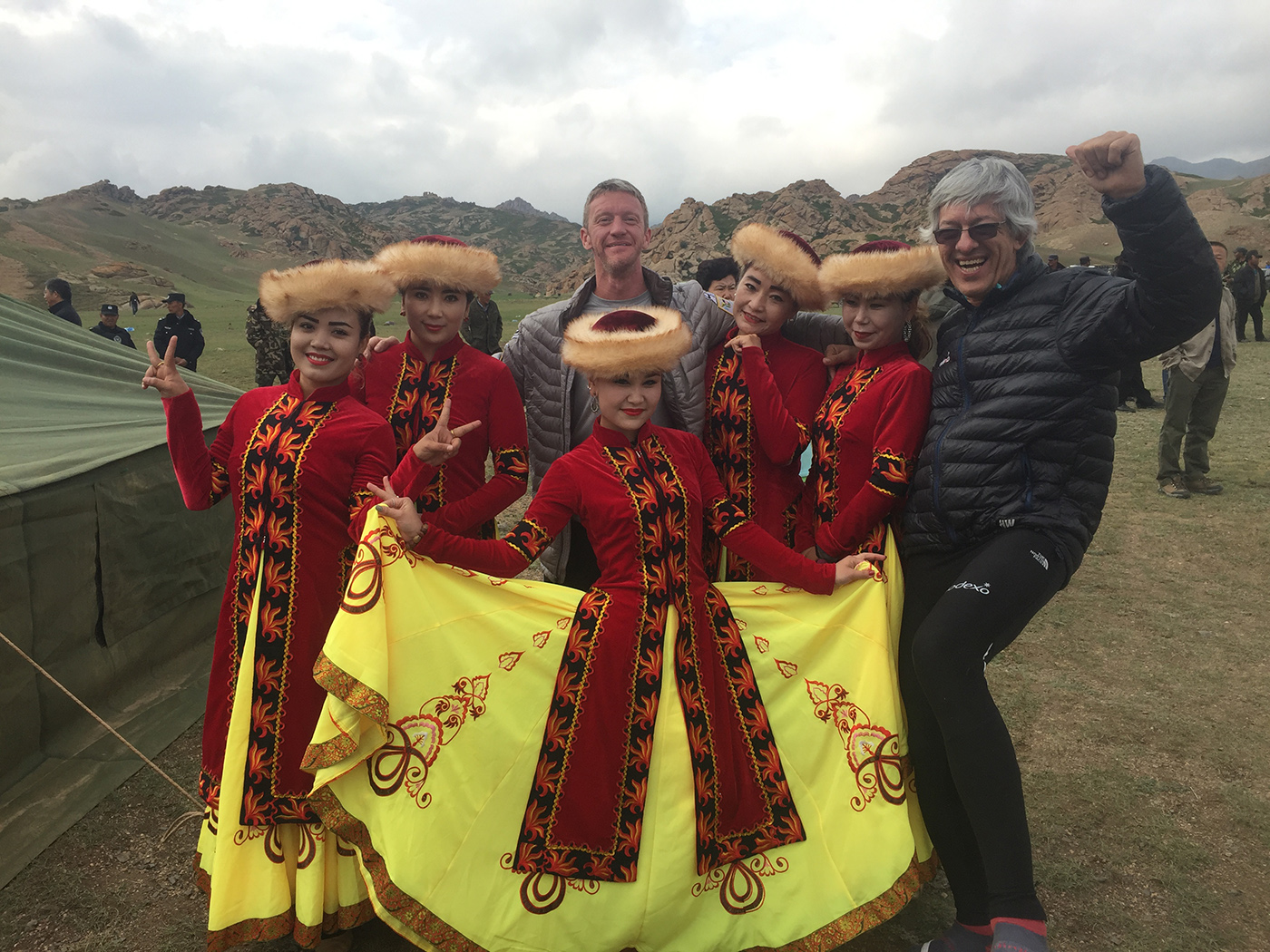 The course we ran for the next week varied in daily distance and terrain, as well as temperature and weather.

The race concept is fairly straightforward. Get up every morning, eat your breakfast (oats for me), pack all of your gear, and start the day’s stage at 8:00 a.m. Competitors must arrive at each checkpoint, placed along the course approximately every 10 km, prior to a pre-determined cutoff time and finish the total stage distance by the daily cutoff time. Miss a cutoff and you risk being pulled by the race staff.

Sounds easy right? Days 1-4 were about a marathon per day and day 5 almost a double marathon. All this while carrying a 20-30-pound pack on your back and traversing some extremely challenging terrain. Also, what you had in your pack was what you had for the week. No support staff or friends handing you food on day 4 because you ran out. Proper planning is absolutely critical to have a chance of finishing this race.

The terrain took us through villages, grasslands, up and over a massive sand dune, climbing a mountain through a forest in the rain before we summited at around 9,500 feet in freezing temperatures during a hail storm, over dry river beds, through river crossings, and finally through the Gobi Desert itself where temperatures reached 124 degrees Fahrenheit (51 Celsius).

Water was provided to competitors at checkpoints located approximately every 10 km along the course. Each competitor was required to carry 1.5 L of water with them when leaving every checkpoint. Between checkpoints there was little to no support, so medical personnel were constantly on the lookout to ensure that competitors were healthy and coherent enough to proceed.

I went from being borderline hypothermic at the mountain summit on day 2 to enduring some of the most brutal heat I have ever felt, during the 50-mile day 5 in the middle of the desert. Stage five in the desert ended up being a place where many competitors suffered from heat stoke and were forced to wait at checkpoints to recover.

Day 5, a 50 mile trudge through the highest temps we encountered, was absolutely brutal. The physical exertion was only matched by the mental determination required to just complete the stage. I came in 24th place for the day in a time of 16:04, only 4 minutes off my projected time of 16 hours at the beginning of the day.

The course (and camp 6) ended up being evacuated around 6:30 a.m. on day 6 due to bad sandstorms that blew over tents and scattered gear. People who were unable to finish the previous day’s course (many runners were still out on the course when it was shut down at approximately 2:30 a.m.) were given time penalties while they were pulled for safety reasons.

Visibility was less than 1 meter in many places.

I also managed to clock around a six-hour marathon through the desert carrying a 20-plus-pound pack on day 4. I placed 16th on the final stage with a 1:03 10 km time on a rather tough desert course where we had to traverse three nearly vertical sand dunes. 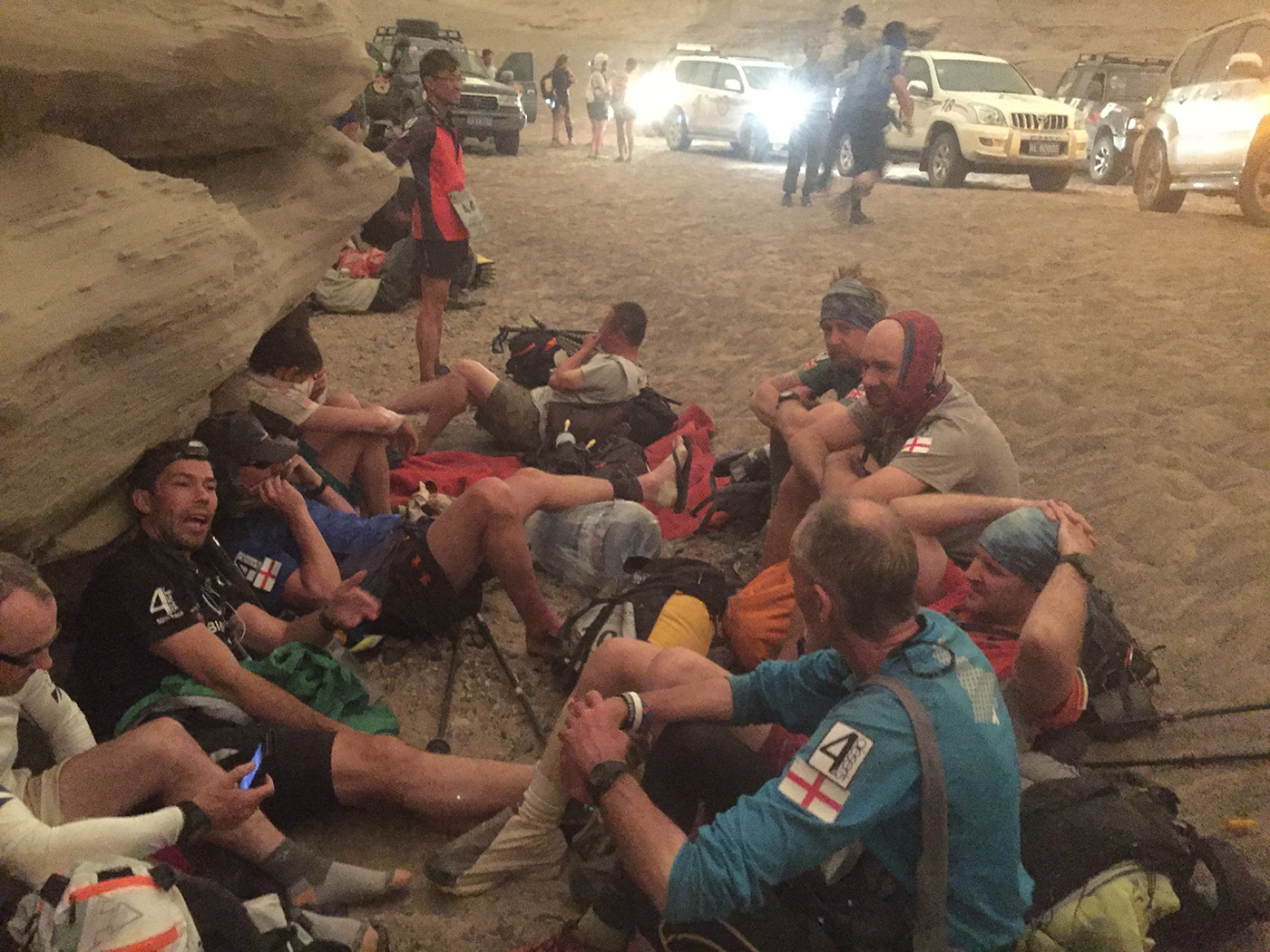 Comradery On The Course

The finishers’ medals were nice, but what I’ll really cherish from this experience was the opportunity to spend a week in the desert with competitors from over 30 different countries, enduring hardship, celebrating victories, and ultimately coming away from this experience a better person.

I have to say that I think my tent and tentmates were the absolute best in the camp. We got along terrifically and will remain friends for life. I enjoyed connecting with old friends (Jax, Thanh, Mario, James, and Ali to name a few) and making new ones.

Running one of these races is humbling to say the least. The mental endurance it takes to survive seven days and nights in freezing cold and boiling hot conditions, eating freeze-dried food and carrying all your gear while getting, at most, a few hours of semi-decent sleep per night is not to be underestimated. 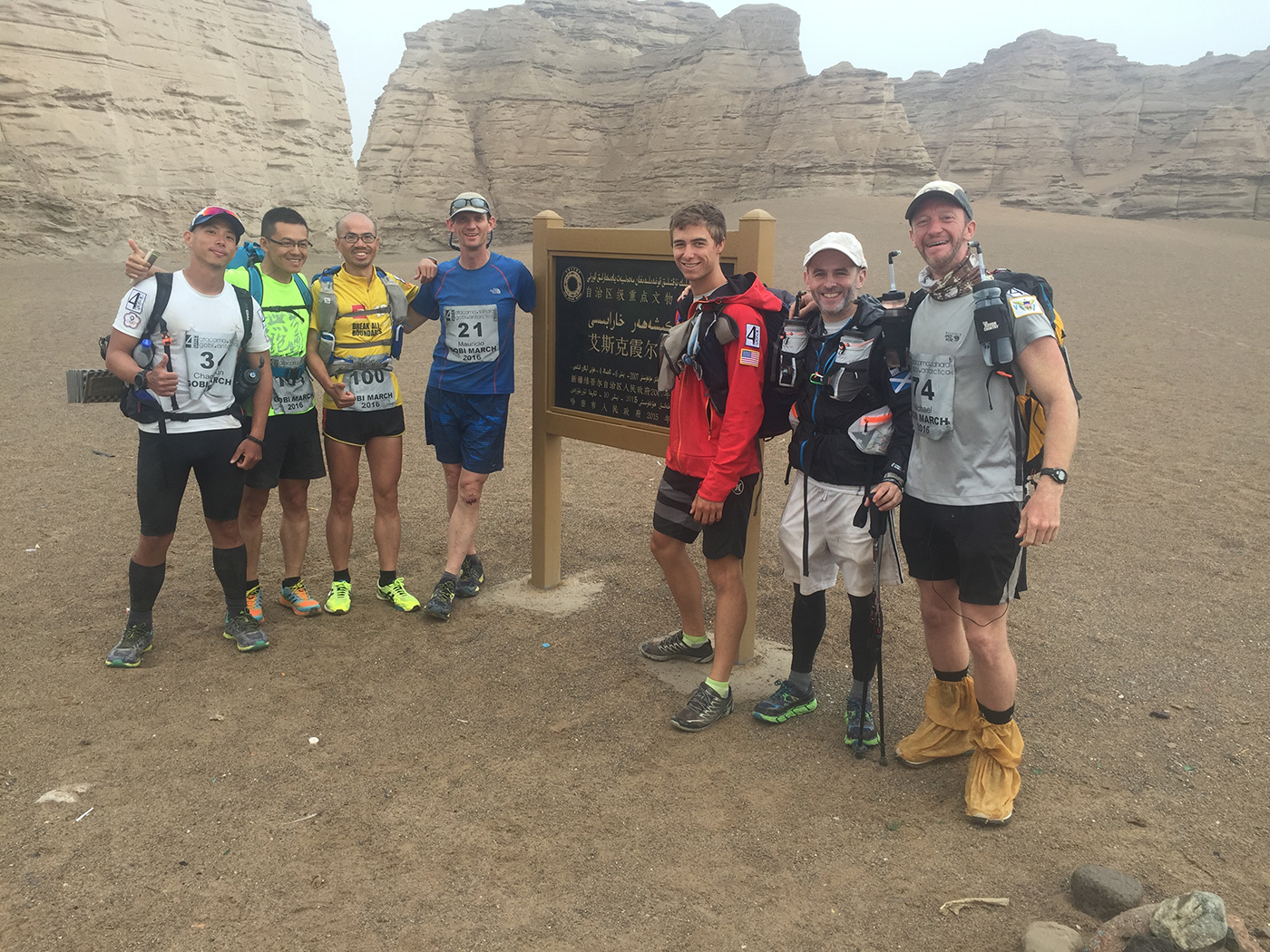 Over the course of the week your body becomes increasingly battered, injuries occur, severe blisters develop, toenails are lost, and some people just simply lose the will to continue. Hydration, nutrition, proper stretching at night and the right mental attitude are all necessary just to get through the Gobi March in one piece.

I think back to a conversation I had with a competitor from Britain, Michael Thompson, on our “rest” day at the emergency evacuation point. We came to the conclusion that not many people will do these types of races, some people simply cannot do them. But we sure are better people for having done the Gobi March 2016. I can’t wait for the next one! 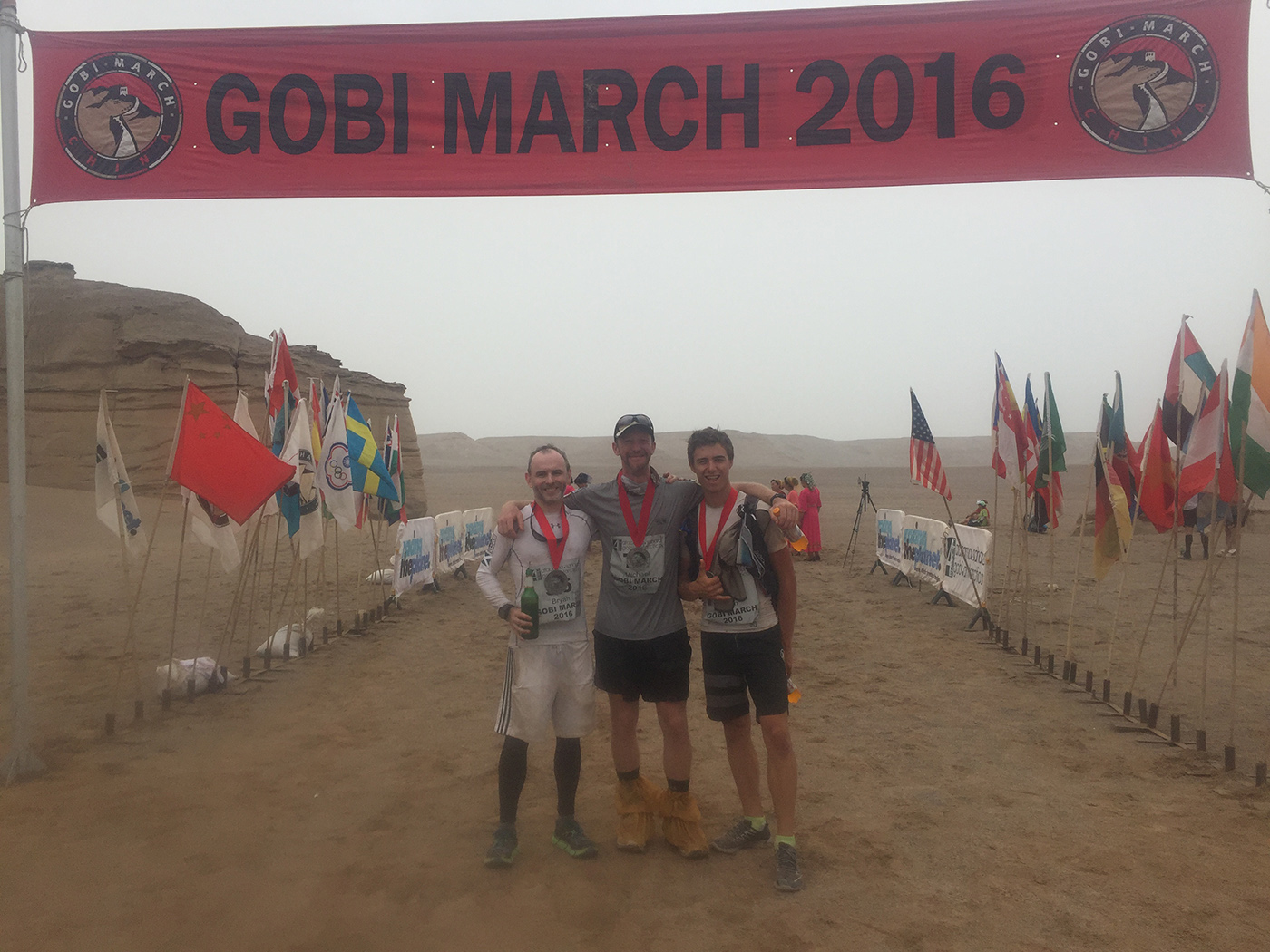 Michael Sheesley lives in St. Thomas, US Virgin Islands, where he is a practicing lawyer and firearms instructor.