Electric coolers are a burgeoning category in the outdoors. Brands like Dometic are quickly popping up in shops like REI and expanding their reach well beyond the overlanding and RV communities. So, is an electric cooler (aka portable refrigerator) right for you? Read on.

Ditch the ice and plug a super-efficient refrigerator right into your F-150, Land Cruiser, or Taco. In just the seconds it takes to plug in that cord, your adventure vehicle is outfitted with a refrigerator, freezer, or, in some cases, a fridge/freezer combo!

But while electric coolers are awesome in many ways, they are not a cure-all for everybody in every situation. We broke down a few common questions about coolers in our video showing off the Dometic CFF 35 cooler and Dometic PLB 40 portable battery pack.

1. Is this better than a cooler?

Different, yes. Better? That’s a complex question. But, in short, an electric cooler like those built by Dometic will keep food cold indefinitely as long as you keep a battery charged up. In the case of vehicles, that means if you’re driving most days, you can likely keep the battery charged for weeks on end. You just have to run the vehicle every couple of days.

Electric coolers also allow you to control the temperature down to well below freezing, so ice cream at the campground is a very real possibility.

Yes. Most electric coolers don’t have a built-in battery. The one we’ve been using, the Dometic CFF 35, either runs off a car battery (it can be hardwired to a vehicle or plugged into a 12V socket) or run off a portable battery such as the PLB 40.

Yes. Brands build quality electric coolers to withstand the jostling and dirt of off-road driving. Unlike your household refrigerator, you don’t have to let portable fridges sit after moving them. The build quality of the Dometic is rugged, although not waterproof. The brand says it can stand up to splashes and even some rain, but you don’t want to submerge or soak these coolers.

This depends on many factors, but running the CFF 35 off the PLB 40, we saw a single charge last from between 1.5 and 3 days. Of course, you can extend that battery life by plugging the PLB 40 into the truck and driving for a few hours to recharge the battery completely. The cooler will continue to run through the battery while it’s charging.

If you choose to run your refrigerator off a car battery, you can either wire a second battery to run it or just use your starting battery. You can hardwire it right to the battery or plug it into your 12V outlet. The CFF 35 and many other coolers have a safety feature that shuts down the cooler before it kills your battery, so you won’t have to worry about getting stranded. But check your specific cooler to make sure this is the case before leaving it running in your car and walking away.

We haven’t tested many, but the models from Dometic are nearly silent.

6. What else can the battery do?

The Dometic PLB 40 also has two USB chargers and a 12V out, so it can run many devices such as lights and air compressors. It can charge off your car’s current, wall sockets, or even solar panels.

If you own a Goal Zero or other similar generator, you can also likely use it to run your electric cooler! Many larger battery packs work great — just investigate what kind of 12V out connections you need for your specific cooler.

7. Who should buy this refrigerator? 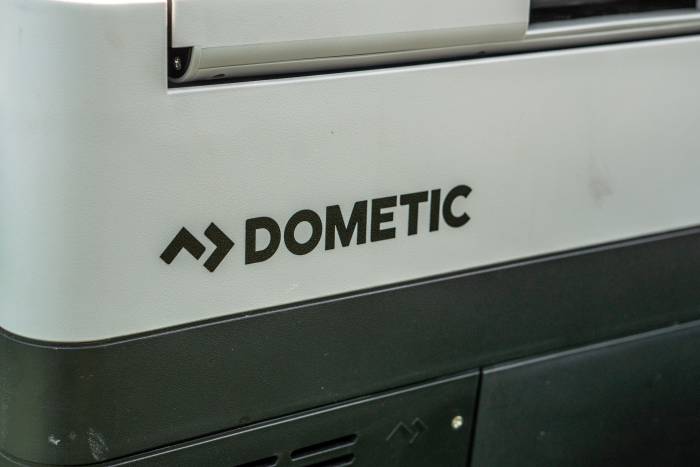 Electric coolers are expensive, in the range of $700 to $1,500 for most. A battery system like the PLB 40 runs about $800, and Goal Zero systems are in the same ballpark. So these are a major investment.

If you spend a lot of time traveling in your vehicle and then camping off the beaten path, this is for you. Overlanders adapted these quickly, as they add an RV element to much smaller vehicles.

If you just need to keep beer cold for a day or two or take short weekend trips to the campground, a cooler is probably sufficient.

But for those whose trips stretch into weeks and months, this fridge could change the way you manage your food. We’ll be testing this cooler and others in more depth, so keep an eye out for a full review coming soon!