OtterBox enters the cooler race today. The brand known for phone cases and dry boxes unveiled a line of modular coolers and drinkware. 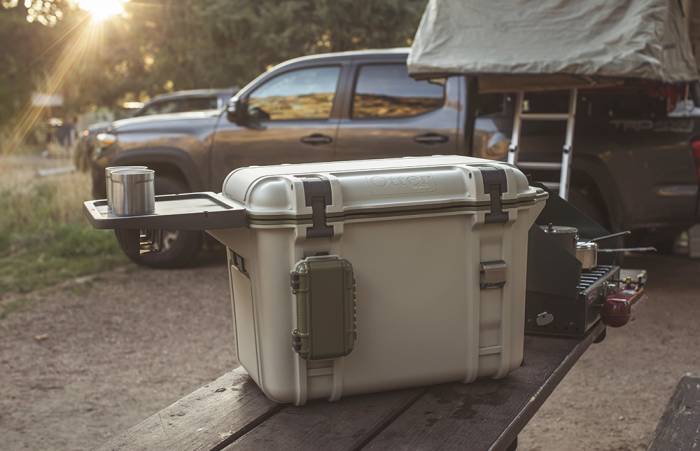 OtterBox thinks your next cooler will be modular. The company is going all-in on a new line of high-end coolers that it claims will stack up against any on the market, including its bold claim of keeping ice frozen up to 14 days (more on that below).

The Venture line of coolers (25-, 45-, and 65-quart) cost $250, $350, and $400. They hit many of the notes now familiar to the outdoors market. Engineers dropped one out of the back of a high-speed pickup truck. It’s bear-resistant for protecting your food at camp.

It stands apart through a modular design. You can attach extras like wheels, drink holders, shelves, bottle openers, and cutting boards.

Its 14-day ice claim? Well, it’s bold indeed, and subject to a lot of variables. But it’s one we’ll hope to test soon.

To start, I visited OtterBox’s headquarters in Fort Collins, Colo., to see what the brand’s engineers and designers had cooking.

OtterBox Venture Coolers: Into The Lab

OtterBox is new in the cooler world, but the brand is well established. Founded in 1998, it builds well-regarded phone cases and waterproof boxes. The brand’s headquarters sprawl over a city block.

I first stopped in the Prototype, Innovation, and Testing Lab, or PIT Lab. In the room, filled with tools designed to test products to the breaking point, I first saw the Venture Coolers.

The Venture line comes in three sizes: 25-, 45-, and 65-quart. The coolers have a dual, cam-over latching front closure and a large hinge that runs nearly the full back of the lid.

Two fixed handles protrude from the sides. Small grooves run vertically on the front and back of the coolers, with built-in clip points to attach the add-ons.

It’s worth noting the cooler is injection-molded, not roto-molded like some of its high-end competitors. The brand said that it chose injection molding due to its familiarity with the process (which is also used in its cell phone cases), manufacturing speed, and close tolerances.

The OtterBox Venture coolers are manufactured in Detroit, Mich.

Senior Test Engineer Lloyd Benes walked me through the quantifiable tests he performed on the coolers. They were dropped, pulled, wiped with chemicals, abraded, and had the drain plug mechanically inserted and removed thousands of times.

After listening to Benes, I was convinced the brand has done its homework.

But whatever the brand does in the lab, one test of coolers stands apart: Bears.

OtterBox, like other brands, took its cooler to a bear sanctuary near West Yellowstone to let the grizzlies have a paw at breaking in. The result was a bear-resistant rating from the Interagency Grizzly Committee. 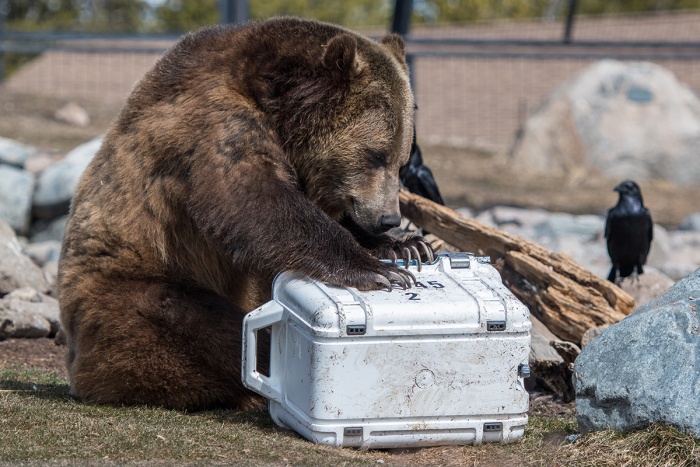 Rayeski, who was instrumental in designing the coolers, explained some of the more nuanced elements.

For one, the bear-resistant rating is achieved through an add-on latch cover and lock. Those who would use the cooler as a bear safe would need to purchase this steel addition to secure the cooler.

He showed how the cooler accessories integrate into the design. The design is slick. The optional cutting board and drink holders nest for storage. The wheels can attach to the 45- and 65-liter models. Every size comes with a bottle opener.

To accompany its cooler launch, OtterBox announced the Elevation tumbler line. Available in 10-, 20-, and 64-ounce sizes, the stainless steel, vacuum-insulated tumblers are similar to many on the market.

They have a unique design twist of a copper lining, which the brand claims increases insulation dramatically by reducing radiant heat loss.

The brand will also offer after-market shaker lids, a french-press coffee lid, and an “infuser” for steeping tea.

OtterBox will roll out the cooler in a unique fashion. It will first hit brick and mortar stores with consumer electronics giant Best Buy, of all places. It will also be available on OtterBox.com. 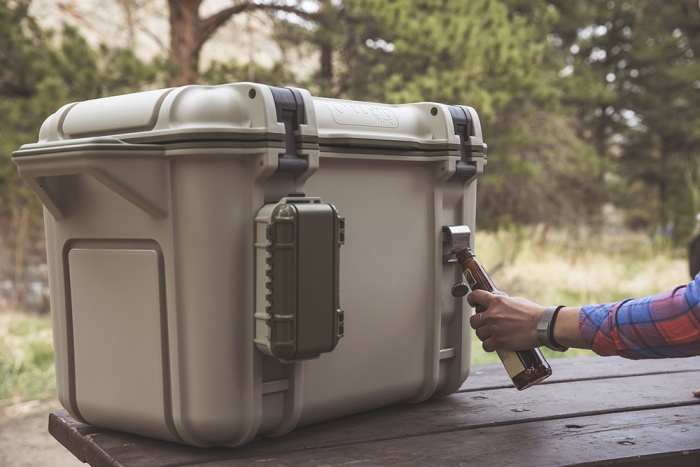 The brand said it expects the coolers to be more widely available at retail outlets and online in July. Its drinkware will hit the market in June.

We’ve yet to test these coolers, but from a first glance they appear well designed and manufactured. The proof will be in an ice cold beer after several hot days in the sun, hopefully later this spring.

Up Next: Five Kayakers Held Hostage In Post-Peace Deal Colombia