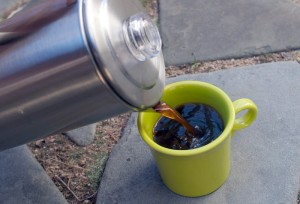 This spring, Stanley released a new version of the old standby, the Adventure Percolator. And, while this thing certainly does not reinvent the wheel, it is a nice rendition with a few minor tweaks that do improve on this standby coffee-making device.

I love coffee, so when this percolator showed up packed with a bunch of Stanley test gear, it quickly moved to the top of my “to test” list. With no time to go camping this week, I busted out my white gas stove and fired it up to percolate in the back yard on a blustery Colorado spring day.

The first thing to note is that the design is pretty standard. The stainless steel pot has a clear “Tritan” plastic nob on top through which you can see the percolating action. Inside, a stainless steel basket holds coffee grounds, and a steel tube carries boiling water from the bottom of the pot up and over the grounds, old school style. 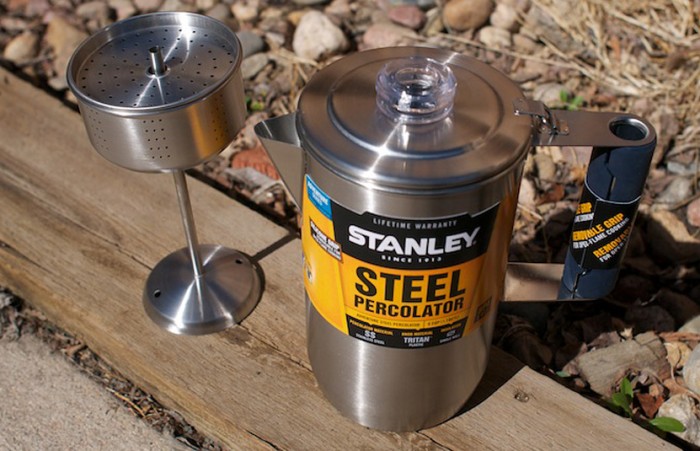 The main difference between this one and most I’ve used in the past is the removable silicone handle cover. This very simple design element is great, as it means you can take the cover off and put the percolator right in the fire, and presumably fish it out with the grip if the fire’s not too high (I haven’t tried this). The plastic nob also doesn’t seem to conduct much heat, a nice point for pouring hot coffee.

The pot can brew up to six cups of coffee, but it’s worth noting that the container holds eight cups of water (space is needed for the brewing basket). A nice bonus of a percolator is that you can also use it as a cooking pot — in this case, an 8-cup cooking pot.

I fired up my Kovea white gas stove in the back yard and put on a half pot of coffee. The pot holds six cups, so I reckon it held about three cups of water when I put it on to boil. Figuring the included basket was designed for a full pot, I eyeballed a half-basket of freshly ground Boyers Coffee, cranked the gas to high (Stanley recommends medium heat, but who has time to wait?) and hopped on a conference call. 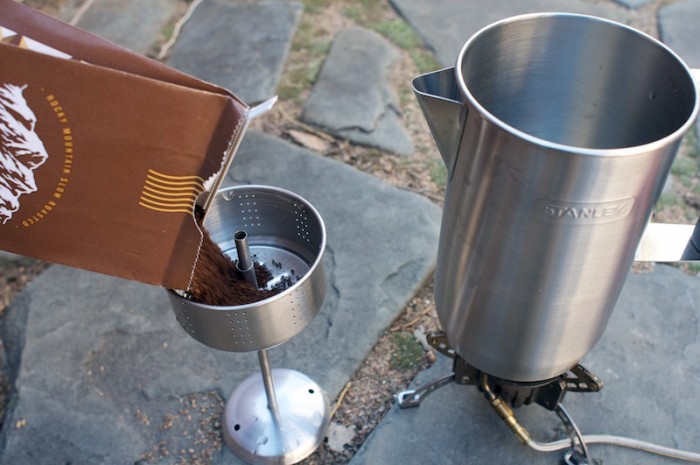 Given the windy day and short supply of gas, it took about 10 minutes for me to get a good boil going.

Herein lies the weakness of the percolator: With many methods of coffee brewing, at this point, you can turn off your heat and just let the coffee brew. But with a percolator, you need to keep the boil going to force water up through the basket.

I let the pot boil for another five minutes, and relished the aroma of boiling coffee. It smells so damn delicious!

Does It Make Good Coffee?

The result? Well, I’m sipping on it right now, and it’s great. The coffee is plenty strong, tastes wonderful, and has no floating grounds — remarkable as I didn’t line the basket with a filter.

Overall, this looks like a solid product for coffee in the outdoors, the cabin, or anywhere a good heat source is available. It is large enough to make coffee for a group of six, a bonus for groups or coffee gluttons.

It’s probably not a viable option for hiking, as it’s slightly heavy and bulky, and requires extra fuel beyond that needed to bring water to a boil.

But for most other instances, the Stanley Adventure Percolator is worth considering for good coffee darned near anywhere.

Up Next: Test: LifeStraw Water Filter For Travel, Outdoors