The straight rye whiskey debut coincides with another social media-based adventure contest that will bring a few lucky folks out to Colorado for an outdoor bonding experience with its ambassadors.

Whiskey has been the lubricant of the outdoors in America since the early days of the first colonists.

Whiskey-maker TINCUP — based in Colorado and inspired by the literal tin cups that old miners, pioneers, and outlaws drank out of in the town of Tincup, Colorado — has slowly become the de facto spirit for folks who live hard and play harder in the wilderness since its 2015 debut.

TINCUP made the bottle hexagonal to keep it from rolling away if it falls down beside the fire and so you could strap it down during transport. It comes topped with a small “tin” cup so you’ll always be able to share a drink. 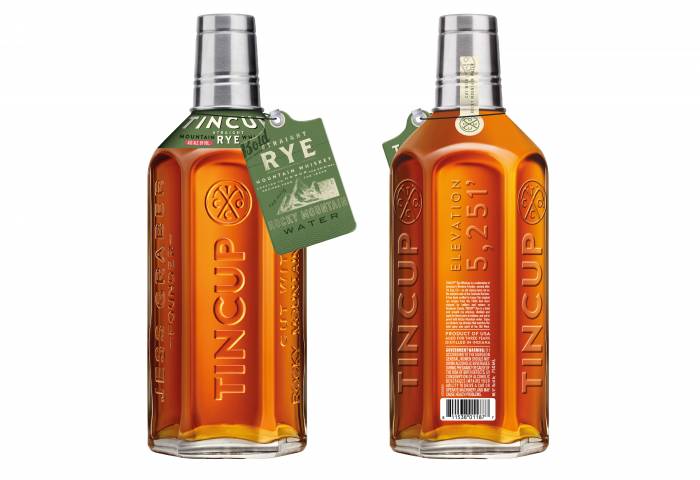 The new whiskey was the preferred style of the tough folks living in the town of Tincup in the late 1800s. It’s straight rye aged for 3 years and cut down to a 90-proof with pure Rocky Mountain water.

The golden-hued spirit boasts notes of vanilla and tobacco while offering a spicy but smooth taste and finishes with a silky caramel flavor.

It’s founder Jess Graber’s third creation at TINCUP. Like the legendary raconteur himself, it’s bound to be an instant classic born from the West. It hits the shelves in February nationwide and will also be available online for $30 per fifth.

Last summer, to find like-minded people who love to mix time outdoors with a little bit of great sipping whiskey after a long day of recreating, TINCUP ran an Instagram- and Twitter-based Backcountry Adventure contest.

The goal was to bring together fans with a few of the legendary members of their ambassador team —expedition storyteller Max Lowe and renowned rock climbers Renan Ozturk and Sam Elias — and founder Jess Graber.

Contest winners hung out with these legends at the Taylor River Lodge (one of Eleven’s famed rustic, luxury resorts), climb Guides Ridge on Mount Crested Butte, and visit the actual town of Tincup. And they got an exclusive sneak preview of the new rye, announced today. 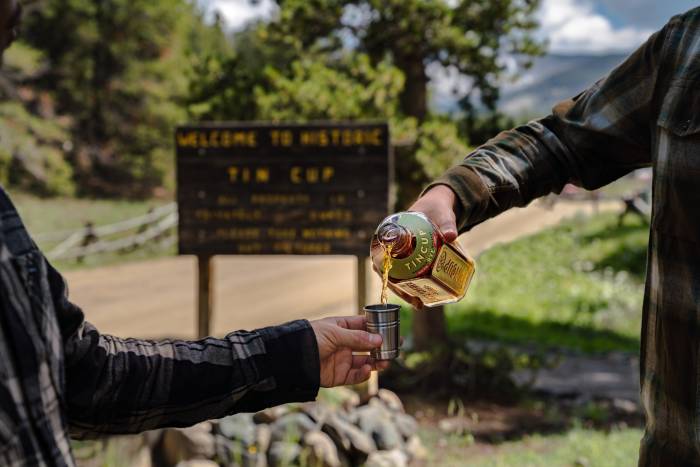 As TINCUP spokesman Joe Risi put it, the spirt of TINCUP is all about celebrating the moments outside and “the ability to inspire people to do rad shit.” And that’s just what they did at last summer’s adventure trip.

If you missed entering last year, TINCUP also announced another social media contest and adventure called Partner in Adventure. Learn more about it or enter here.

This time, the brand is still highlighting stories of adventure. But the focus is on partners in the wild, modeled after two of the town of Tincup’s legendary figures from the late 19th century, mayor Alex Parent and bootlegger Uley Scheer. That adventurous duo braved brutal treks over Colorado mountain passes in the middle of winter to keep supplies (and whiskey) flowing into the tiny town.

Two of last year’s participants, Griffin Mims and Ross Bernards, shared a bit of their background and their experiences entering the contest and taking the trip, in tribute to the launch of the new rye.

For Griffin Mims, doing “rad shit” is essential to his love of adventure. Though he only started climbing when he enrolled in the University of Nebraska, and at their indoor Outdoor Adventures Center, Griffin was immediately hooked.

One big impediment to developing his vertical adventures was that Nebraska has no rock to climb. You have to travel 7 hours in any direction from the school to get to anything resembling a climbable pitch.

“My appreciation for the outdoors, and the mountains in particular,” he said, “grew immensely as I began to dive deeper into the sport that took me to environments that provided such a stark contrast to that of my home state of Nebraska.”

Griffin soon hit up the NOLS (National Outdoor Leadership School) program in Patagonia in the fall of 2018 and quickly became immersed in photography and climbing. A film that Renan Ozturk worked on with Chris Burkard, called “Under an Arctic Sky,” inspired him to buy a camera and pursue a career in outdoor adventure and storytelling.

For his entry into the contest, he recounted an ascent in Patagonia: “I posted two images, one black-and-white and one in color, and used the two images to demonstrate how I felt like I now saw the world in color versus black-and-white after spending time in the backcountry and having my eyes be opened up to the world of real adventure.”

Longtime adventurer and photographer living that van life, Ross Bernards has slowly converted most of his friends to the libation, mostly while it was lubricating his storytelling muscle while sitting around campfires apres adventure. “I wish it helped them tell better stories around the fire. Instead, they just tell more embarrassing stories about me,” he said.

Ross grew up in small-town Oregon but didn’t feel the call of the wildlands until he settled in in the Rocky Mountains of Colorado. He was more attracted to the manicured greens that come with golfing.

“Growing up, my idea of ‘getting in nature’ was going golfing,” he said. “I think the first-ever hike I went on wasn’t until I was 22 and living in Jackson, Wyoming.” He developed his love of photography, though, while in high school shooting for the newspaper.

After about 10 years of neglecting his passion, he jumped back in, mostly while developing his main outdoor passion, canyoneering.

“My favorite ones are the canyons that you have to drive 50 miles down a dirt road, unchaining yourself from being in ‘service’ and instead of being present,” he said.

Up Next: Engel Fridge for Van Build: 6-Month Review